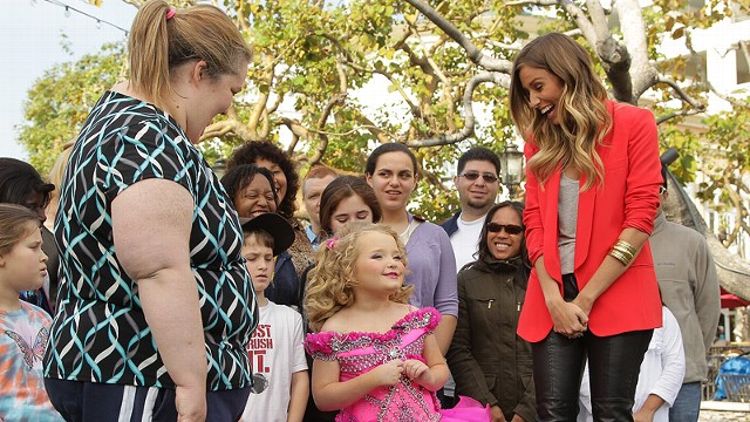 TLC, formerly known as The Learning Channel, has officially become television’s no. 1 #human_shaming channel, showcasing some of the worst humans in the world in dire situations (usually unbeknownst to them), whom viewers can then passively bully and judge from the comfort of their own homes. Without these freaks, what sense of normalcy could we project upon our own lives? But TLC’s latest, Here Comes Honey Boo Boo, is actually progressive reality television — it merges multiple genres of #human_shaming: The Thompson family are proud rednecks, immersed in the world of child pageants, living in a modern version of poverty, battling obesity, while housing a pregnant teenager.

Honey Boo Boo is the nickname of their youngest daughter, 7-year-old Alana Thompson, an overweight child-pageant competitor from Georgia whose lewd behavior and outspoken confessional interviews (even when evaluated in the context of a show about the ass-crack of humanity that is child-pageant culture) earned Alana her own spinoff from TLC’s Toddlers & Tiaras. More important, the Honey Boo Boo brand has emerged as a legitimate cultural phenomenon, trendy enough to be name-dropped as proof that one is ‘in touch.’ Alana and her family are being deconstructed with extraordinary disdain, as if they have brought about the apocalypse for the tasteful art of reality television.

Television critics would like you to believe that there is nothing redeemable about the Thompson family, except if you believe in the idea that the true American family loves one another while living in a perpetual cloud of their own fart fumes. The Thompsons have become this season’s train wreck anti-celebs we can’t turn away from, seizing the mantle from the Teen Mom with the nudes leak, Snooki’s pregnancy arc, and Courtney Stodden’s perpetually enigmatic body. How did they become America’s favorite family that people love to claim doesn’t represent America?

Maybe it’s Honey Boo Boo’s outspoken, morbidly obese mother, June, who encourages her children to fart out the junk food she buys on the cheap at a local food auction. Or maybe it’s Honey Boo Boo’s 17-year-old sister, Chickadee, who is pregnant. The Thompsons seem unfazed by Chickadee’s situation, portraying teen pregnancy as an accepted social norm of rednecks. Then there are two more sisters, nicknamed Pumpkin and Chubbs, who provide adequately dumb chatter and take up space on the sectional sofa. Perhaps it’s their father, affectionately known as Sugar Bear, who represents a modern Everyman as a simple chalk miner incapable of or uninterested in stopping his family’s rampant farting, cursing, or lack of bathing. They’re united by their staunch belief in one common goal: supporting Honey Boo Boo’s pageants. In the eyes of the Thompsons, Honey Boo Boo will one day become Miss America. They believe in their little girl. Sweet, young Alana, who has a belly she contorts into a mouth that she uses to speak to viewers.

Can’t we just watch our obese rednecks make their way in their backward world without having to think about the social consequences of another #human_shaming television show? Reality television, by its nature, is a biased portrayal of terrible humans. They are terrible because they are too stupid to realize how they will be portrayed, or they are terrible people portraying themselves stupidly in order to create a personality compelling enough to launch a cultural phenomenon. Here Comes Honey Boo Boo makes TV critics uncomfortable because it is difficult to decipher what makes the Thompsons the ‘terrible people’ that we want reality stars to be.

After the Democratic and Republican conventions, it is clear that there are two very different Americas. However, if there’s one thing that unites us all, it is our collective will to pull ourselves down by our bootstraps, sinking below the filth of our cultural status quo in order to collectively detest the worst of humanity by way of reality television. But the Thompsons’ trashiness is nuanced, and ratings for this portrayal of Honey Boo Boo’s struggle have been strong. The only matter that is undecided is whether we will be blessed or cursed to follow this little girl until she ‘goes Haim’ on the society that created her.