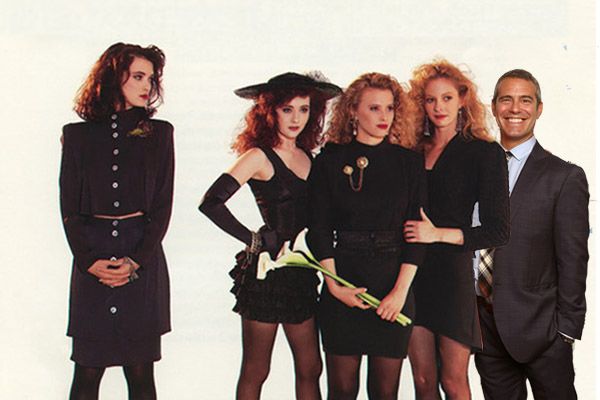 Before we start flailing in incoherent rage against the following bit of today’s news, let us go on the record as not being against Progress. We are not especially prone to sentimentality or a preciousness about the cultural artifacts of our youth. You want to remake that thing we love so much? Knock yourself out, we’ll still have that original thing! You can’t take that away from us. We’ve never even accused the handsy-in-old-age George Lucas of diddling our childhood for what he did to Star Wars. Ruin away, Uncle Georgie, it’s your increasingly ridiculous, Bantha-piss-sodden, Jar Jarred–up sandbox. That being said:

This morning, The Hollywood Reporter brings word that Bravo, your basic-cable destination for OCD-addled house-flippers and Botox-paralyzed house monsters, is making a big push into scripted TV, and among the five drama series in development is a “reboot” of Heathers, arguably the most beloved black comedy of its generation. Here’s what they have in store for us, according to THR:

In the updated take, Heathers picks up 20 years later, with Veronica (Ryder’s character) returning home to Sherwood with her teenage daughter, who must contend with the next generation of mean girls: the Ashleys: the daughters of the surviving Heathers.

Commence vomiting up a stomachful of hull-cleaner mimosa and crash to your death through a coffee table. Where to begin? First: the Ashleys. Of course they’re Ashleys! What else would the “surviving Heathers” name their children? (Dakotas. They should have been Dakotas. Come on.) OK, fine, they’re Ashleys. It’s petty that we’re even bothering with that. Ashleys are great. (Dakotas.)

Here’s our actual problem with the whole thing: Unless this reboot involves Veronica’s outsider progeny offing an Ashley (or a New Kurt, or a Ram 2.0) every couple of weeks, they’re not doing Heathers, they’re doing Mean Girls. Oh, and there’s the suicide attempts. (Big Fun was right: Teenage suicide, don’t do it. Martha Dumptruck can hip you to that. Good God, Martha’s going to be the gym teacher, zooming around in her motorized wheelchair, isn’t she?) And then there’s the whole thing where J.D. tried to blow up Westerburg High, which, we presume, is a nonstarter in the post-Columbine era. Do we really think Bravo’s going to dip a severed Andy Cohen toe (terrible pedicure accident, don’t ask) into even the shallowest end of these dark waters? We’re guessing not. So why bother?

It’s not too late. Spend whatever it takes to buy the rights to the Lohan movie and do that one, Bravo. Don’t make Christian Slater pack up his exhausted penis on the set of that new Lars Von Trier art-house orgy to come over there and explain why this is a terrible idea for your network. Let us cranky Olds have this one nice, messed-up thing. When we’re all enjoying Mean Girls: The Next Generation next year (you’d watch that, right?), we’ll toast with some yummy Hull Clean Cosmos, have a good laugh about that bullet we all dodged, and reminisce about the times we all gently fucked each other with chainsaws.