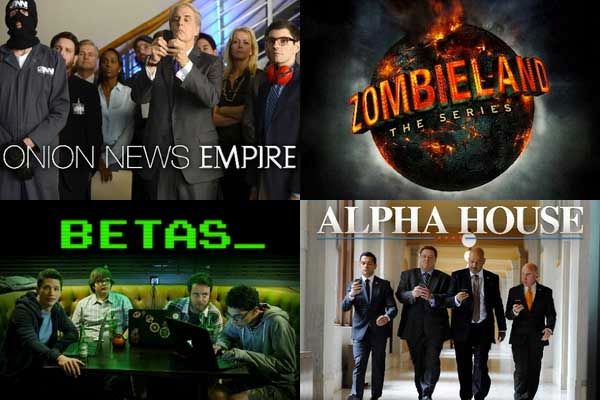 Well, kind of. This morning, as promised, Amazon released every pilot from its new development slate on the site. That’s 14 shows, all ready and available for your viewing enjoyment, right now. And now comes the revolutionary part: The more you watch and like any given show, the better chance it has to make it to a full series order. Democracy in action!

Deadline has a breakdown of the offerings: “Amazon’s comedy pilots available for viewing as of today include Alpha House, starring John Goodman with cameos by Bill Murray and Stephen Colbert; musical Browsers starring Bebe Neuwirth; Onion News Empire, starring Jeffrey Tambor; Those Who Can’t, which was submitted though Amazon Studios’ website; Dark Minions, written by Big Bang Theory co-stars Kevin Sussman and John Ross Bowie; animated comedy Supanatural; Betas, starring Ed Begley Jr and Jon Daly; and Zombieland, based on the hit feature.” That last one comes from Rhett Reese and Paul Wernick, who also wrote the movie. More importantly, they also told us some pretty sweet ODB stories once.

Now as for how the pilots’ popularity will be judged, it won’t be a view count over everything situation. Deadline, again: “Amazon will count how many people watched each pilot, how many watched each pilot from start to finish and how many shared it on social media. Additionally, the company will evaluate feedback from an online panel recruited on Amazon preview as well as traditional offline focus groups.” Also: “A pilot that gets a lot of ‘likes’ but the vast majority of people like it, don’t love it, won’t score as high as a pilot that has fewer fans but they all love it.” And as of right now, Amazon hasn’t said how many of its pilots will get series orders, or how many episodes each series order will constitute.

VOD Report: Django Unchained Has Both Our Curiosity and Attention