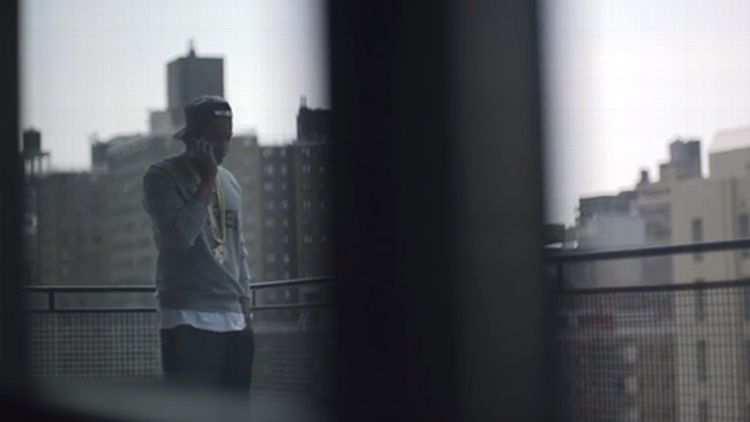 Hip-hop’s very cool summer camp counselor, Jay-Z, did something extremely out of the ordinary yesterday. He responded to a tweet.

This sent the Internet into a frenzy, with Twitter users far and wide attempting to get Jay’s attention, get him to respond, get 600-plus retweets, and finally, get bragging rights for the rest of the day.

Following the Fagioli tweet, for the next seven hours, Jay responded to over 160 tweets, a mixture of banter with his real-life friends, genuine answers to genuine questions about the album and his career, and replies to Internet trolls. It was fascinating, especially if you’re a Jay fan, less because of the information obtained and more because it was actually Jay (a fact confirmed by Twitter).

I realized this was happening with about 30 minutes left in the Young-A-Thon, so I missed most of the real-time action and, of course, getting my question “Are tear-away pants back?” answered. Thankfully, however, all of his answers are still on Twitter.com, giving readers the opportunity to fantasize at length about some of his most fun responses.

My eight favorite, all perfect if considered with a vivid imagination and a big heart.

8. Tweeting from an alpaca rug …

… and not from the dentist.

Where is Jay during all of this? We don’t really know, but even the split second of imagining him in a waiting room at the dentist was worth the mind-wander. But then you remember of course he’s not, because there’s definitely a live-in Carter Family Dereon Dentist who brushes the family’s teeth every morning and night as well as constantly reminds them that flossing isn’t just up and down, but also side to side.

TWEETING FROM THAT ALPACA RUG, THOUGH. Why not? This reference, definitely a callback to Denzel’s rug and blotting demands in American Gangster, could easily be true. Just imagine Jay, lying on a rug, tweeting while making sure his child, also on rug, doesn’t eat the jacks set (a very hard game to play on alpaca rugs, by the way). That’s beautiful.

Jay called Magna Carta Holy Grail‘s 13th track, “BBC,” the most fun song to make on the album. This was probably because it’s the album’s ultimate background posse cut, with vocals provided by Nas, Justin Timberlake, Swizz Beatz, Timbaland, and his wife. That’s important, when you picture all of them, Jay included, doing this dance, the “one of joy the kid from the Lakers did that year.”

Who knows if that’s the dance Jay is talking about, but thankfully there’s no one to prove otherwise, because the only people in Jay’s inner circle are the people Jay tweeted at and they’ve all since been Illuminati-raptured and no longer are allowed to read Internet sites. So there’s that.

We now know Blue is a Giants fan and will probably want a Victor Cruz jersey, but who knows, last-minute she might switch it up and want a Jason Pierre-Paul jersey … but then you never know, maybe she has an acute sense of history and would love nothing more than a throwback Lawrence Taylor jersey.

The only way for Jay to handle this is to take Blue along and let her pick it out for herself. I could think about this my entire life.

5. Jay wandering around his house, looking for Rick Rubin.

I know nothing about Jay’s house, but I assume that, wherever it is, the rooms have rooms. Because of this, I love entertaining a world in which Jay is frantically searching the house for his missing 1099 form and, after 30 minutes of checking, opens a closet door and sees Rick combing a bison mane with a slide rule.

That’s really the entire scenario. Waffles, Britney, and Jay. I need nothing else in this mortal life. Just that and praying he has it on his “rise and grind” playlist.

3. Hanging out with Picasso

Shawn and Pablo. What would that day be like? Knowing Jay, I have to assume he was talking about a day during Picasso’s Blue Period. And because those were more somber times, I’d assume the day would consist of a lot of tears, tantrums, and D’usse.

Serious question: How rich do you have to be to not have had “cereal in a bit”? Or maybe there is a more refined version of “things-in-milk-with-bowl-and-spoon-usually-in-the-morning-but-sometimes-late-late-at-night” that us normals don’t know about. Whatever the case, I like the idea of grown-up Jay — Magna Carta Jay — sitting in Mama Knowles’s house in Houston and spotting a box of Cap’n Crunch above the fridge.

And then looking around, making sure the coast is clear, and pouring the remains of the box into a oversize serving bowl.

AND USING WHOLE MILK, BECAUSE WHY NOT AT THIS POINT?