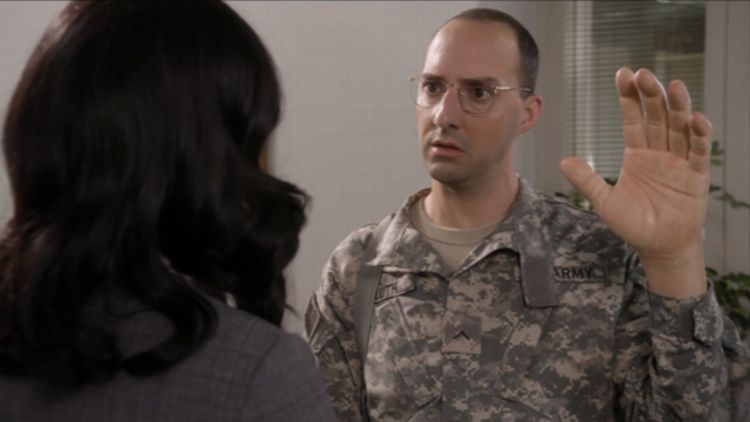 It’s taken a long time for this season to click along at the pace I remember from Arrested Development’s first three outings, though comedy always flows at a faster pace in hindsight. You don’t remember the journey to get to the joke, you remember the joke. One of the many reasons that Arrested bears repeated viewings is that there’s no need to rely on faith that your patience will be rewarded, there’s only the anticipation of the reward.

This first and only Buster episode clicks along nicely, perhaps because Buster is so singularly weird and delightful. He is barely a Bluth at all, a poster child for fetal alcohol poisoning in the best way possible. He is the most innocent of the Bluths, the most confused and least vengeful, and consequently the most tangential to the family’s schemes.

And so more than any other episode, “Off the Hook” relies not just on a single character but a single actor; many of the scenes are just Tony Hale interacting with props or fantasies. I know people praise Arrested for its ensemble cast and say they miss the group dynamics in this season, but the scenes of Buster re-creating — and improving upon — his home life with a pillow-bodied Lucille (“Welcome home, chubs”) delighted me as much as any of the snappy dialogue between two real people. Of course, it’s Buster’s nature to be more at ease with stone-cold objects rather than those made of flesh and blood. No wonder he loves his mother so much.

In a shockingly racy opener, Buster is fitting in with a black family (echoes of his temporary idyll with Lupe’s clan in Season 2) — and by fitting in, they mean his tongue into the willing lips of their matriarch.

There is the standard rewind to five years ago, when Buster was in much more dire straits: dumped in the drink from the Queen Mary, facing his biggest fear, not “confronting a wet loose seal, but losing one.”

With Lucille carted off to Coast Guard jail, Buster makes do with the previously mentioned “mock mother.” He attempts to live what I suppose he would consider a normal life, laying out mother’s clothes, making mother’s breakfast (martinis). It’s a little eerie, of course. The narrator says it’s kind of like “that Vince Vaughn movie, Psycho.”

But this is a healthy relationship compared to what happens when Lucille comes home. She and Buster play “Guess the Fur” and smoke together while Buster sharpens up his cover story for Lucille’s defense in the Queen Mary case. At the “legal defense strategy meeting/graduation party,” Michael observes the progress they’ve made: “You managed to combine people’s fear of homosexuals and eels into one alibi.”

Lucille, never satisfied, harangues Buster for his ineptness and his choice of trial attire. He intends to go as John-John Kennedy, a favorite costume from the annual Motherboy convention. Great, says Lucille, “Half your testicle was hanging out of that thing.” Buster sasses back, “I’m glad they saw it. It was like a Motherboy Ball.”

But Lucille’s ridicule does nothing but throw him back in the arms of Lucille Austero, who is now into “juicing” — and scandalously invites Buster to drink juice in the afternoon. “Honey,” she says, “It’s 8 a.m. somewhere.” Buster loses the night and is incapacitated by his juice-over. He races to the trial in his John-John getup but doesn’t make it. What’s worse, Lucille knows why: “I can smell the cran-apple from here.”

Rejected again, Buster returns to Lucille Two. He woos her: “I love to hear all about your medications.” He wants a mother, she wants a lover; there’s not much of an in-between. He spends his days trying to make up with Lucille One, he spends his evenings trying not to make out with Lucille Two: “Is this another night where nothing is as it seems and there’s no cream pie for dessert?”

Lucille Two finally gives up on bringing up Buster and he’s forced to look for another way to support himself. He goes back to the Army, of course, where his ease with artificial intelligence (one could say his own intelligence is pretty artificial) and video games puts him in the drone-captain’s seat, bombing targets in Afghanistan from a strip mall in Anaheim: “Take that, Taliban wedding!”

When he falls off his chair in the middle of a fit of conscience, the Army gives him a big hand. Yes, a BIG HAND. A monstrous one.

Lucille visits him in the hospital, but is unmoved by his plight (and grossed out by his hand). She tells him he needs to move on: “It’s not about forgiving you,” she assures him. “Although I don’t.”

The Army wants to find a use for him and his bionic hand but Buster fails out of rehab (he’s not so different from Lucille in that respect). Pushed aside by the military, he’s a veteran with no place to go — until he becomes a great campaign prop, in a couple of senses, for Herbert Love. He’s not just the veteran onstage, giving the candidate a reflected glow of patriotism, he’s also called upon to “Hold your government hand out!” and deflect a thrown shoe.

It’s all bunting on the hustings for Buster until he’s scared off the campaign trail by Marky Bark’s glitter bomb. He starts spending more time at the Love home. Thus we arrive at his absorption into a kindly black family and the romantic scene we opened with.

Unfortunately for Herbert’s wife, Ophelia, Buster is not feeling it. Again there’s a conflict between a hot mother and hot mess: “You don’t think the ‘next level’ is adult adoption, do you?” This time, though, Buster rises to the occasion. “I’m not a Motherboy anymore,” he declares. “I’m a Motherman!”

A man and a dupe, it turns out. Ophelia was just using Buster to get back at Herbert for his affair with Lindsay. Buster protests they can return to the filial relationship: “This is just a little mother-son bump in the road” — though, technically, they were in the bedroom.

Ophelia rejects the plea and decides to forgive Herbert and work on their marriage. Cue the Charlie Brown music. Buster hatches a plan for revenge, though: He will expose Love’s love — at CINCO!

At Cinco, Buster runs into a few folks, including Tobias, who tries to corral him into performing as the Thing: “You’re a monster, you don’t have to be any good!” But it’s Perfecto that puts his unnatural skills to good use, asking Buster to put the hurt on Love for (Perfecto thinks) bullying Maeby.

He also sees Lucille Two, who he tries to belatedly interest in the Love blackmail material: “He’s gotten himself into some pretty hot ham water this time.” Lucille Two reveals that she planned to get Buster woozy on juice so he would miss his mother’s trial.

Betrayed by everyone around him, Buster looks to punch a donkey but instead gets drunk on donkey punch. He becomes a part of the Cinco melee, and after, staggering in the dark, he finds Lucille Two on the stair car, apparently bloody and unconscious. The body then disappears (it’s kind of a Twin Peaks moment). His apparently incriminating behavior is recorded on the security camera above. Good thing his nephew has invented an internet privacy thing that also prevents piracy, right? Buster tries to cover his tracks, but it’s only a matter of time before he’s found out: ticktock, ticktock.

So here’s some lists of things I saw, please put the things you saw in the comments!

Stuff that is oldish:

Stuff that is newish:

Martin Mull as the donkey punch-pushing Gene Parmesan, Andy Richter, and the usual gang of now-regulars.