All Man, All Machine, All Cop: The Enhanced Personhood of ‘RoboCop’ 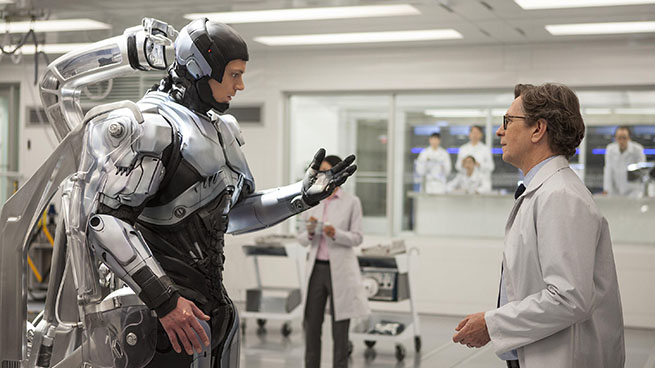 The only striking scene in the otherwise negligible RoboCop remake comes a little less than midway through the film. Alex Murphy, a Detroit police officer nearly fatally injured in a car bombing, wakes from a coma to find himself in a robotics lab in China. His distraught wife, hoping to save or at least prolong his life, has signed off on an experimental procedure to has transform him into, well, you know.

Upon awakening, he understandably refuses to believe his situation, and demands to be dismantled. “Show me,” he grunts. His doctor, Dennett Norton (Gary Oldman), complies. The servomotors start whirring, and Murphy is de-articulated like a Thanksgiving turkey. Limb after limb is secreted away, until Murphy discovers, to his complete horror, how little of his physical self remains.

The inventory: one brain, now studded with chips and wires; one conveniently unspoiled face; one hand, propped on the end of a metal shunt; and two lungs, flapping wetly against a transparent, synthetic rib cage. He is perfectly abject, and the camera lingers on his horrible remains for a surgical eternity.

This scene has an existential color that is muted, and eventually bled out, by the rest of the movie. Without his mechanical body, RoboCop is little more than a brain in a jar. With it, he’s a neurological passenger perched on top of a big machine; as such, he can’t objectively know if the external world — the lab, his family, Detroit’s criminal element — is real. His brain, nakedly exposed and laced with hardware, is receiving a cocktail of impulses both authentic and programmed. Waking from his coma, newly born as a cyborg, he assumes, at first, that he’s dreaming.

Of course, this is the human condition. Our bodies are just biological machines that contain the little wet mechanism that responds to “me.” We may all be dreaming; from a philosophical standpoint, we are all RoboCops. It evokes this parable from the Chinese philosopher Zhuangzi:

Is Alex Murphy a cop dreaming that he is a robot, or is he a robot that only dreamed it was a cop? The question isn’t answered in either iteration of RoboCop — not in Paul Verhoeven’s gonzo original, and not in this remake by Brazilian director José Padilha. A cyborg is a new paradigm whose philosophical mechanics fall between butterfly and man, between man and cop. For a cyborg like Alex Murphy, identity is a chimera, a state between man and machine.

The original RoboCop, starring Peter Weller as the titular cop, was a louche B movie surfing the cash wave of the immediate post-Terminator years. It was of an era when sci-fi action movies began to reject the hygienic futurism of earlier blockbuster franchises, namely the Stars Trek and Wars. The effects had a marvelously tactile quality; RoboCop whirred, clanged, had patina. David Foster Wallace, in a 1998 essay about Terminator 2, compared Paul Verhoeven’s visual palette in RoboCop to those of Terry Gilliam (Brazil had preceded it by only a couple years) and, of course, James Cameron, whose original Terminator, in Foster Wallace’s worthy opinion, was a “dark, breathlessly kinetic, near-brilliant piece of metaphysical Ludditism.”

In 2014, RoboCop’s ponderous outfit doesn’t pack the same punch. For one, it’s not considerably updated. It doesn’t appear as though Joel Kinnaman — a Swedish actor cast, it seems, on the strength of his jawline — took much longer getting dressed in the morning than Weller. And perhaps we’ve reached a saturation point for metal suits, what with the Iron Man franchise’s constant clanging and Matt Damon’s robotic armature in Elysium.

Movies about external transformation always lean on the presumption that the original person is “still inside,” but there isn’t any inside with RoboCop. Iron Man is wearing a suit; RoboCop is a cyborg. There’s no getting undressed. When he Skypes his wife after his procedure, he zooms the camera in hard on his face — the only visible piece of original machinery — so as not to frighten her. When they first hug, her cheek lands with a clunk on his metal chest. Sex is out of the question. He can’t even sleep at home anymore; he needs to be plugged in at the station and juiced with vitamins. In a crucial training sequence, it’s revealed that once in combat mode, he only has the illusion of free will.

How much RoboCop can “feel” is measured by the amount of dopamine in his brain. When computing his own attempted murder threatens to override his system, Murphy’s keepers suck out the dopamine, allowing the machine to clamp down on Murphy’s soft issue. Thus numbed, Murphy becomes RoboCop, immune to the suffering of his own family, devoted only to the annihilation of all crime. It’s a misguided solution, seeing as both RoboCop’s makers — OmniCorp, overseen by a truly baffling Michael Keaton, and the Detroit P.D. — are crooked, and thus fated, inevitably, to encounter firsthand the impartial metal fist of justice.

Dopamine is far more closely associated with the reward system in the brain than it is with emotion; in fact, a significant reduction in dopamine is more likely to cause ADHD or restless legs syndrome than to bring about a clinical immunity to feelings. And anyway, emotion — in lack or abundance — is a terrible metric for personhood. It doesn’t preclude self-awareness. Robots will never feel precisely as we do, but that doesn’t mean they won’t have an ethical claim to exist in our world, as sentient beings, once they develop self-awareness.

RoboCop would have benefited from muddier, more realistic stakes. Cyborg enhancement is far less science-fictional now than it was in 1987. Advances in implantable microchips and prosthetics that interface with the human brain, to say nothing of active artificial intelligence development and a global community of body hackers, are only the beginning.

Proponents of the technological singularity, that crucial moment in future history when we are lapped by our own inventions, generally gloss over the dirty details of a posthuman future. Ray Kurzweil, author of The Singularity Is Near, prophesies that nanobots will enter our brain tissue sometime around 2030, allowing us to transcend the limitations of biology. Our intelligence, he writes, will bloom throughout the universe at the speed of light, in a sublime shudder of cosmic awakening.

But the journey into a technological tomorrow won’t be some blissful sublimation into the cloud. At least not at first. Our merger with the machines will have its horrors. We will likely feel like disassembled RoboCops: gross, only tenuously alive in the traditional sense, and raw as hell. We may look monstrous. Our organs will pulse weirdly against plastic armatures and we will beg, like Alex Murphy, to be put back together and never, ever shown the truth again.

See all The Futurist