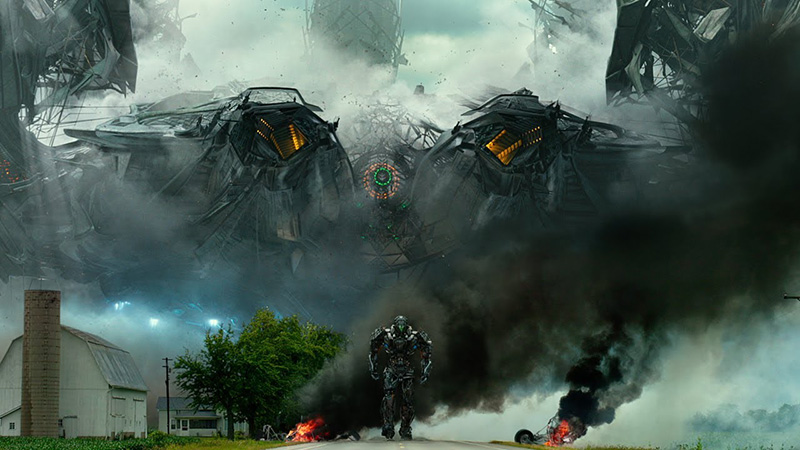 No, take him. Travel to his Philadelphia home. Sneak up behind him in his study while he’s drinking port, doing line edits on the latest issue of Poor Richard’s Almanack, and throw a burlap sack over his head. Carry him with you through the centuries until you’ve arrived in the present day, and drive him, still blind, to a suburban movie theater. Any will do. Buy two tickets for Transformers: Age of Extinction, and maneuver him into a front-row seat. IMAX. 3-D, even, if the glasses fit over his bifocals. Yank the sack off.

The question: What happens next? Will this man from another time — not just any man, but Benjamin Franklin — be able to process Transformers: Age of Extinction as information? Or will the whirling, individually articulated infinitudes of transforming metal in Michael Bay’s continuing saga register solely as a loud and horrific blur, a nightmare beyond mortal comprehension?

The more I consider this thought experiment, the more it becomes a question of training, of process. No great intellectual chasm separates Michael Bay from Benjamin Franklin. Not on an evolutionary level, at least. Had Franklin been born in the 21st century, weaned on the technological diet of this generation, he’d certainly be as nimble a screen-tapper as you or me. He might even ditch Philly for Silicon Valley or Hollywood. He was an inventor — a creative — after all.

In his lifetime, Franklin expressed a pointed interest in the future; in a 1773 letter to his friend Jacques Barbeu-Dubourg, he half-invented cryogenic preservation, one slow path toward time travel. “I wish it were possible,” he wrote, “to invent a method of embalming drowned persons, in such a manner that they might be recalled to life at any period, however distant; for having a very ardent desire to see and observe the state of America a hundred years hence, I should prefer to an ordinary death, being immersed with a few friends in a cask of Madeira, until that time, then to be recalled to life by the solar warmth of my dear country.” Still, once you took him out of that life-preserving Madeira, Transformers: Age of Extinction could very well kill him.

Unless, that is, he were properly trained. So let’s revise the scenario of abduction. Rewind to Philadelphia, the year 1785. Leave the burlap sack behind this time, and approach Mr. Franklin with a proposal that no true Renaissance man could resist: a master class in the technologies of the future. Make arrangements back home; you’ll need a couple of months of unbroken time for this, perhaps even years. Lead your subject into a quiet room, free of distraction. Begin with something he’s familiar with. Show him a camera obscura and give it a bit of the Idiot’s Guide treatment until he’s rolling his eyes and begging you to skip forward.

Show him Pepper’s Ghost, the parlor trick that uses mirrors to create the illusion of floating figures in a room. Walk him through the history of photography, an art form that emerged only some 30 years after his death. Show him some daguerreotypes, then Muybridge’s photographic series of running men and horses with their hooves all in the air at once, like clouds of sinew and bone. One afternoon, build a zoetrope together, over tea and biscuits. Offer him a glimpse of a naughty kinetoscopic peep-show reel. And then, only then, can you dial up the Lumière brothers’ steam train pulling into the station at La Ciotat, a film that made the first audiences who saw it, in a Parisian café, leap from their tables in terror. Follow with some slapstick, then Méliès. Take long breaks, and let him deconstruct every machine you show him.

It’s still a long journey from here, but the first and biggest conceptual leap has been taken. The idea of moving images should be unmagicked by now. Franklin is at the projector, winding and cranking with a delirious expression of joy on his face, his tinkerer’s tic in full swing. He is proposing tweaks to the processing of your film, improved grommets and spools. Smile and offer him a weeklong vacation.

What follows, in this long, slow education, are hundreds of tiny increments. You will walk Benjamin Franklin slowly from Pathé to Chaplin, from D.W. Griffith to Busby Berkeley, from Hitchcock to Kubrick, along a daisy chain of footholds. He’ll have trouble with color and sound. Computer graphics will be a doozy. The permutations of modern language and the changing social mores captured on film will present their own hurdles. But you’ll be patient, and one day, gasping for breath, run ragged by the relentless march of progress, you will find yourself at the summit of Mount Optimus.

You and Benjamin Franklin will rest, gazing down from the mountain at the entire history of the moving image. Chariots, Romans, gangsters, and astronauts, whirling together in a sea of voices and limbs, the tears of a million starlets, the birdlike whir of countless projectors, all of it will belong to you — to you and old Benjamin Franklin.

And then, interrupting this brief, peaceful lacuna, you’ll suddenly hear an unmistakable sound. Clang. Clang. Clang. You’ll hold Franklin’s hand and whisper, apologetically: The time is now. And swooping up from behind you will come millions of shards of computer-generated metal, each individually rendered in gleaming chrome, assembling at impossible speeds into — oh god, the horror — into men, into giants, whipping the sands of the world into meaningless fluff.

To understand the future, you can’t just be transported into it without reference. It would be meaningless and terrifying chaos. A man born in 1706 is no less neurologically equipped than I am to operate an iPad or watch a Transformers movie, but his lack of familiarity with the incremental developments in technology that led to such things would be insurmountable. Most science fiction never alienates us in this way, because it tends to have an extrapolative quality: We recognize elements of the present day, strung through a speculative future to some strange conclusion. We see the similarities and infer the differences, our natural aptitude for pattern recognition leading us briskly to the relevant discontinuities. Good science fiction transports us, trailing crumbs of context along the way.

But the history of technology doesn’t quite work that way. It’s full of surprises, of forking paths from one technology to the next, of exponential upticks and unprecedented derailments. The Benjamin Franklin example is a little broad, but it illustrates that context — a through line by which the future might be navigated, by an 18th-century time-traveler or an armchair thought-experimenter — evaporates quickly when large jumps are made. Consider this when (or if) you buy your ticket for Transformers: Age of Extinction this week. This moment, like every ineffable present moment, is someone else’s distant future.

You are in the unique position of being able to comprehend it, but don’t grow too comfortable. Benjamin Franklin was the master of his time, too. Before you know it, the Transformers clock will spool, as if in cinematic time-lapse, to higher and more rarefied planes. Transformers 5. Transformers 6. Transformers 79. What is merely overwhelming today will someday become inscrutable to the point of mysticism. And like Benjamin Franklin without his Sherpa, without anyone to debrief us, we will become what we all have the capacity to become: idiot strangers in a lonely and baffling world, surrounded by metal monsters shaped like men.

On this crucial day in U.S. history, Will Ferrell's inspirational voice is the one that can lead us to victory. (Or a tie. A tie is OK.)

Q&A: Stephen King on Writing His First Episode of ‘Under the Dome’ and the ‘More Potent’ Second Season