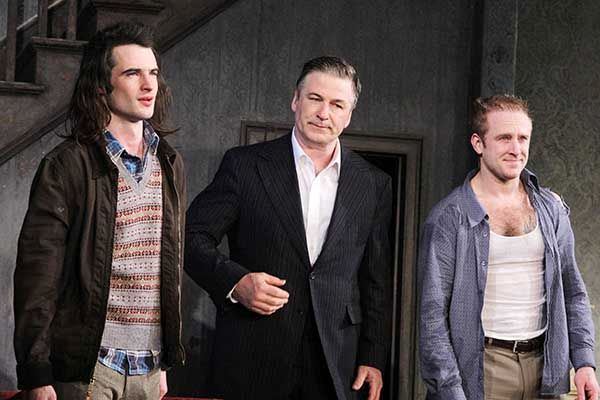 As you may recall, Shia LaBeouf and Alec Baldwin were supposed to appear together this season in the Broadway play Orphans. Then, LaBeouf got fired. The reasons why were never explicitly stated by Orphans‘ producers, but reading between the lines would lead you to two observations:

LaBeouf caused quite a commotion when he went out, tweeting out private e-mails between him, the cast, and the producers that landed somewhere between confessionals and humblebrags (one quoted his former co-star Tom Sturridge saying “I was stunned by the work you were doing, the performance you were giving. I think you lifted the play to a place high than maybe it even deserved to be”). Since, he’s gone out of his way to appear graceful in defeat. On Letterman, he called Baldwin a “good dude,” not once but twice. (He also, like a true fan of the theater, showed up at Orphans‘ first preview screening, sat in the front row, and “was said to be effusive in his applause, at one point slamming the stage with his hand.”) As for Baldwin? Ehh, not so much. Reacting to Shia tweeting that the “theater belongs not to the great but to the brash,” Alec told Vulture that “I don’t think he’s in a good position to be giving interpretations of what the theater is and what the theater isn’t. I mean, he was never in the theater. He came into a rehearsal room for six or seven days … sometimes film actors … who are purely film actors, they’re kind of like celebrity chefs.”

And then the play just went on its way, with Ben Foster — who’d originally auditioned for the role — subbing in for LaBeouf. It ended up nabbing some pretty good reviews and, this morning, a Tony nomination for Best Revival of a Play. Happy ending (for everyone but Shia), right? Nope! See, despite his star wattage and his own good notices, Baldwin didn’t get a Best Actor nod. The Times has a theory why:

The producers of the Broadway play “Orphans” may have botched Alec Baldwin’s chances at a Tony nomination. The producers had wanted Mr. Baldwin to be eligible for a best actor Tony, and his co-stars, Ben Foster and Tom Sturridge, to be eligible for featured actor nominations. But when the Tony administration committee met Friday to consider those requests, members balked: They viewed Mr. Baldwin’s character — the gangster Harold — as a featured role, given time onstage and lines of dialogue. In the end, the committee decided to make all three actors eligible in the lead category. And on Tuesday, Mr. Sturridge received a best actor nomination for his portrayal as the young shut-in Phillip — but Mr. Baldwin came up empty-handed.

And so you can’t help but imagine that, somewhere, Shia LaBeouf is thinking IF ONLY THEY’D KEPT ME ON AND LET ME TURN THINGS UP TO A BILLION LIKE I WANTED TO, WE’D ALL BE WALTZING HOME WITH MORE TONYS THAN WE’D KNOW WHAT TO DO WITH. Anyway, congrats, Sturridge!

You Should See ‘Not Fade Away,’ a Great Movie That Should Have Been a Greater TV Show

Hollywood Prospectus Podcast: Mad Men, Mud, and Getting Clean on Game of Thrones