You Should See ‘Not Fade Away,’ a Great Movie That Should Have Been a Greater TV Show 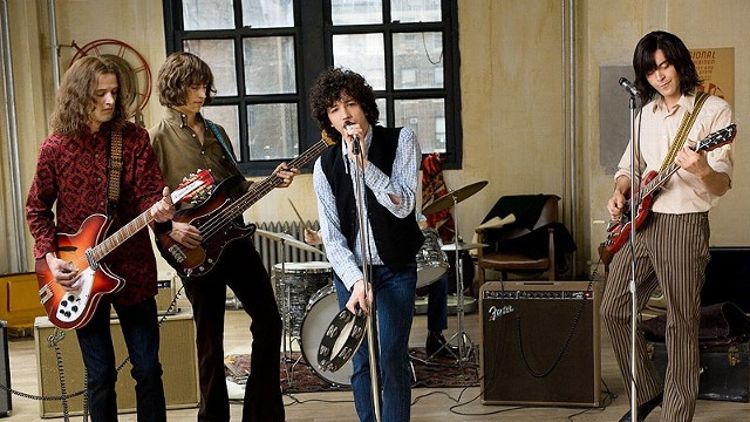 Last October, between the Tarantinos and the Spielbergs, the Hanekes and the Bigelows, the first glimmer of another little auteurist movie trickled out. Over Keith Richards’s bending guitar strings on “Parachute Woman,” a curled-lip kid from Jersey whines about leaving home. “I think we should all move to the East Village,” the kid says to his bandmate. “There’s a music scene there — not here!” It was for David Chase’s first film, Not Fade Away. This is the trailer:

I hadn’t swooned over a trailer like this since Daniel Plainview growled his own tirade: “I’ve got a competition in me. I want no one else to succeed.” This is a fool’s errand, flipping over what’s communicated in a trailer. But it’s all there in this one: the moody protagonist, the pretty girl, the authoritarian father, the shimmering fireworks in the night sky, the ominous aphorism (“There’s no past. No future, either”), Brad Garrett, a flash of a flipping motorcycle, a beachfront view, the Cuban heel-to-top-button suit-up, friends, fights, and fuss. Not Fade Away — which, depending on your point of view, is either cheap baby boomer bait, masterful existentialist art, or a sly convergence of the two — was not seen by very many people, unfortunately. It opened on December 21 in three theaters, grossing less than $20,000. It eventually expanded to 563 theaters, reeling in just over $600,000. It reportedly cost $20 million to make. That is a catastrophic failure in Hollywood terms. But why did it fail?

That not many people saw Not Fade Away isn’t all that surprising. (Look at this astonishingly spare Wikipedia entry.) There’s a lot working against it. It was not marketed very well — my mother, for whom this film was basically made, hadn’t heard of it until after it closed nationwide, after just five weeks. It stars an unknown, the sullen, talented John Magaro. It’s a period piece. Its fragmentary title, taken from the essential Buddy Holly song, doesn’t say very much to ignorant moviegoers. Its only salable name is James Gandolfini, a TV star with virtually no success as a movie star. And Not Fade Away is an oblique little movie, with a loose structure, unsympathetic leads, and a confounding — if fascinating — ending.

But all of those things are reasons to see the movie, which is being released today on Blu-ray and DVD and streaming and all other manner of legal purchase. Chase is a terribly interesting figure. After honing his craft on ’70s genre fare like The Rockford Files and Kolchak: The Night Stalker and then toiling on quirky but airy shows like Northern Exposure in the ’90s, he was granted a little daylight at century’s end. Chase hadn’t launched an original series since Almost Grown — not incidentally named after another classic ’50s rock chestnut — flamed out on CBS in 1989. He was finally given the green light 10 years later by the increasingly aggressive pay cable network HBO. At the time, the Home Box Office channel was still known for Dream On and The Young Comedians’ Special and Oz and thrice-daily showings of Just One of the Guys. The Sopranos, of course, became the most important TV show of the past 20 or so years: It ushered in the so-called Golden Age of TV and valorized the showrunner — in this case, the brooding and brilliant Chase. It’s also an amazingly deep, weird, slow, and incredible show. Chase is great at setting and characterization — he makes you feel that his drama is composed of real people. He’s also hilarious, which people tend to forget.

I admit that Not Fade Away isn’t a very funny movie. But it brings with it all of the other trademarks of The Sopranos, namely Gandolfini as a burly, wheezing patriarch; an abrasive, aggrieved mother figure; great, soulful music; a quixotic protagonist; and beautiful, imperfect people trapped in uncommon scenarios. Not Fade Away is about loving that soulful music, mostly — the 24-song soundtrack, made up of originals by a fictional band, the Twylight Zones, and historic acts, is one of the best in recent memory. And while The Sopranos was thought to be somewhat memoiristic — Chase is a New Jersey–bred Catholic with some mommy issues — his first film feels much closer to autobiography. Chase was in a band in Jersey — he played drums and sang, like Magaro’s Douglas — and he fell in love with a girl and the British Invasion. He yearned for a recording contract. He failed there, though things did work out for him creatively. Because Not Fade Away seems aimless at times, wandering through its story before a rushed third act, you could chalk this movie up to a missed stroke by a smart but tentative man with credibility to burn. For example, I found this interview with Elvis Mitchell, wherein Chase sounds awfully insecure about the prospects of his film, quite fascinating. (Lighten up, David! People think you’re a genius!) But the more I’ve thought about it, and the more I watch Not Fade Away (and that trailer), the more I see the sketch of a great television show. That might seem reductive or dismissive to Chase, who after finally making his first movie (hopefully not his last) is being told to get back on the TV conveyor belt (feed us more episodes). But Not Fade Away is too expansive for 112 minutes. The birth, rupture, rise, and maybe fall of a young band? They’ve made shows about less, with less at stake. You should see Not Fade Away as soon as you can. But you may want more — more story, more characters, more detail, more music.