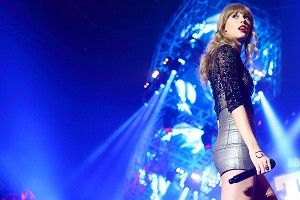 Today was a big day for the young-adult genre. CBS Films bought the rights to Children of Paranoia, the first part of a trilogy about “a secret war that’s been waged for centuries via assassins,” and nabbed Battlestar Galactica‘s Mark Verheiden for the screenplay; meanwhile, Columbia Pictures has Erin Brokovich‘s Susannah Grant working on the adaptation of The 5th Wave, which swaps out assassins for aliens. How are our real, live young adults doing? Oh, they’re OK! Taylor Swift told Rolling Stone that “the only love worth being in is the love worth singing about”; amphibious, pee-drinking goddess Ke$ha was born with a tail; and then there’s this photo of Miley Cyrus making out with a man dressed as a giant baby.