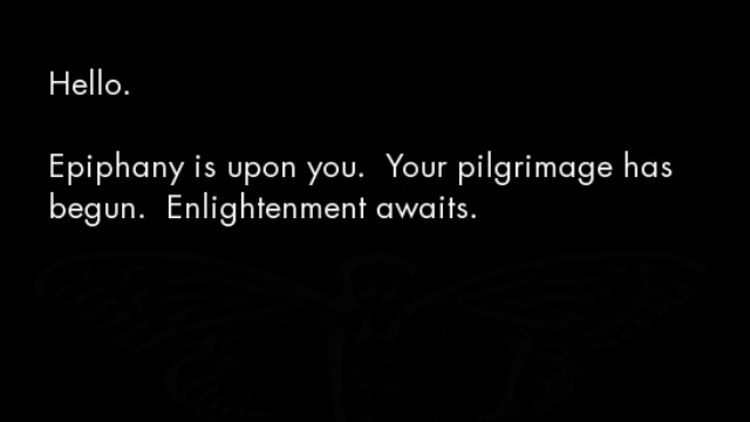 By now, you may have already heard of Cicada 3301, the Internet puzzle that began its third round last Sunday; then again, you may have skipped past it, and with good reason. Its purpose is vague and mysterious, its difficulty level intimidating, and it requires conversancy in plug-ins and encryption. It’s dense and hard, like a wall intended to keep you out unless you’re one of the best (or at least most devoted) cryptographers around. But once you’re sucked into the rabbit hole, you find yourself reluctant to crawl out of it.

Cicada 3301 first appeared in January 2012 on a 4chan board. The message, a text image signed “3301,” read, “Hello. We are looking for highly intelligent individuals. To find them, we have devised a test. There is a message hidden in this image. Find it, and it will lead you on the road to finding us. We look forward to meeting the few that will make it all the way through. Good luck.” Opening the image in a text-editing application hinted at a Caesar cipher, a common encryption that replaces each letter with one a certain number of positions down the alphabet. It seemed simple enough, but attacking the first step of the puzzle that way just led to a decoy message and the image of a duck — a steganography program, OutGuess, was required to crack it. If you were still sweating it out at that point, you were rewarded with more clues — a subreddit with more encrypted messages bearing PGP signatures, confirming that they were coming from the same sender. Book codes revealed a (now deactivated) phone number, which, when called, issued a math problem that led to a website bearing the image of a cicada and a countdown.

The cicada may be a reference to the prime numbers used in the creator’s signature and some of the puzzle’s clues (North American cicadas favor prime-number life cycles to evade predators), a creepy reference to the symbolism-laden, infamous moth from Silence of the Lambs, or maybe even the fact that the complexity of the insect’s song sounds, to most of us, simply like a monotonous dull racket. Maybe Cicada 3301 was a mating call, intended to attract only the people who understood it and keep out the rest.

Things got stranger after the countdown clock appeared: OutGuess supplied a series of geographic coordinates, pointing puzzlers to physical clues — paper stuck to telephone poles, bearing the image of a cicada and a QR code — in locations from Miami to Warsaw. The implications of this were breathtaking. This was either the work of a single (possibly insane) ambitious genius with unlimited frequent flyer miles (a poster in Australia, another in South Korea) or an entire network of them. Scanning the QR code resulted in puzzles with references to the Mabinogion and Agrippa, as well as a caution: “You’ve shared too much to this point. We want the best, not the followers. Thus, the first few there will receive the prize.” When the last book codes were cracked, users were told to create a new email address and await further contact from the game master(s). But after that, things get murky. The finalists were sent emails with one last puzzle, but according to the Uncovering Cicada Wiki, they “went completely dark, as if they had disappeared from the internet.” The winners of the first round had, a final message from “3301” confirmed, been found.

At this point, if you’re still with me here, you might want to take a deep breath and dive into Round 2, which began on January 5, 2013. A Twitter account entered the picture, as did an original song, more cicada-emblazoned posters at physical locations, the Darknet, “onions,” and — debatably — a personality test. It gathered steam with each year’s sequence, and when The Telegraph reported on the phenomenon in November 2013, Cicada was pushed out of its underground burrow into the mainstream media. It was a delicious snack for the paranoid, conspiracy theorists, and Dan Brown fans: Could Cicada be a CIA or NSA recruitment tool (“We are looking for highly intelligent individuals”)? A new method of finding the most brilliant programmers, a sophisticated software casting call? Or was it just a game?

I have been talking everyone’s ears off for the past two days trying to find out. The frustrating thing about Cicada 3301 is that it self-insulates against casual curiosity-seekers trying to crack it: We are not the puzzle’s intended audience, which is as maddening as it is satisfying and true to form. I asked my friend Jeff if he’d heard of it, sure that he had because he spent most of our high school years quoting ancient Greek texts and tossing off algebraic puns like he was reciting Dave Matthews Band lyrics. Nope: He suggested I watch Mercury Rising. A chat with Molly Lambert was fruitful in that it reminded me that I liked David Fincher’s The Game and offered the possibility that if Cicada was just a fun romp, maybe it was at least a puzzle with high stakes, a reality-melting psychological experiment requiring deep emotional and intellectual stamina.

Eventually, I got in touch with Jesse Fuchs, a professor at the NYU Game Center. “I did actually think of the card game Netrunner when I was reading this,” he said, referring to a collectible card game in the vein of Magic: The Gathering. “It’s an asymmetrical hacker-vs.-corporation game where the two sides function entirely differently — both thematically and mechanically — yet are balanced against each other. In this case, this is a card that either side could possess.” In other words: Cicada’s showrunner could be a recruiting organization or just “an Internet genius with Reddit friends.” One of the strangest elements of the puzzle is that it enlists its users to crowd-source clues, then, essentially, cautions them against sharing information and forces them to compete to see who’s first through the gates.

Government campaigns and Google X employee filters aside, one logical conclusion is that Cicada is a very grand ARG, or alternate reality game. ARGs blur the lines between gaming and reality by adapting to player response and creating a community of users who crowd-source puzzle-solving clues. There’s something human about them — one of the first, Majestic, liked to surprise you by sending faxes or calling you on the phone — and an element of suspense that isn’t easily replicated by traditional or artificial-intelligence-driven games. “There’s always a huge appeal of jumping-out-of-the-system puzzles,” said Fuchs. “The most famous battle in Metal Gear Solid is the one where you have to realize that the Boss is controlling your mind through your controller slot, and the only way to beat him is to actually unplug your controller and plug it into Player 2. I mean, it’s no rabbit hole–to-the-NSA, but it’s the moment anyone who’s played it remembers,” said Fuchs. But couldn’t it be more? I mean, we’re talking telephone-pole clues in South Korea! “Maintaining plausible deniability as to the real-world stakes does add, uh, zazz. If it’s actually someone recruiting for something, I’d be intrigued, but would need to ask a lot of questions to determine whether this seemed like a legit recruitment tool or a Men Who Stare at Goats sort of folly.” That’s the kind of healthy skepticism required for a party with the cicadas, after all: The Uncovering Cicada Wiki is quick to remind you that the no. 1 rule of trusting people is don’t.

Professional puzzle writer Francis Heaney tells me that he hasn’t tried to solve Cicada, but speculates it might fall on the wrong side of the difficulty vs. solvability imbalance, serving up a soothing balm for those of us who feel like our heads must be stuffed with bags of hair because we can’t get past the first level. “It’s really quite easy to write a hard puzzle that no one can solve (at least without luck or grinding perseverance),” he wrote in an email interview. “It’s hard to write a hard puzzle that, while still being challenging to an expert, offers enough internal confirmation to a solver that they’re on the right track, and should keep doing what they’re doing while progressing through the steps of the puzzle.” He says the teamwork-oriented online community surrounding Cicada is a sign of “a puzzle that is mostly impossible for a normal human to solve.” The sophistication of Cicada might be misleading, deliberately or otherwise, making us too eager to believe its stated intention to find the most brilliant code-breakers who sit, never sleeping, awaiting its next prompt. It only emphasizes individual ability in its final stages, all but forcing us to rely on each other to get a cohesive picture of its scope and meaning.

But it’s hard to imagine that all of this effort is being expended for the sole cause of our rising adrenaline and expanding our knowledge of Welsh texts. Maybe our collaboration skills are being tested along with our intelligence; maybe there’s a still greater purpose in exploring the dynamics of our ability to share information digitally and discern who can be trusted with deeply encrypted secrets. A teenager, known only by his handle Tekk.nolagi, claims to have cracked the puzzle in a previous round, but says he lost interest when the ultimate goal, to create do-gooding open-source software, was revealed (something about that doesn’t smell right, but who am I to argue? I can’t decrypt for shit).

And now we begin again. The first Cicada 3301 clue of 2014 was posted on January 6 in a tweet that reads “Hello. Epiphany is upon you. Your pilgrimage has begun. Enlightenment awaits. Good luck. 3301.” For all the press coverage and intrigue, most of us are soon locked out by a lack of OutGuess savvy, blindness caused by number-sequence tweets, and insecure rage that our puzzle skills probably wouldn’t even qualify us to be contestants on Survivor. The meaning — if there is one, if it’s not just a trivial pursuit — will probably evade us forever, suddenly falling silent and crawling back into underground tunnels that most of us can never access. We’re left to enjoy the indecipherable noisy roar and its rough translations, knowing that there are constant earthly mysteries that never cease to test our desire — and ability — to solve them.