This Is Their Youth 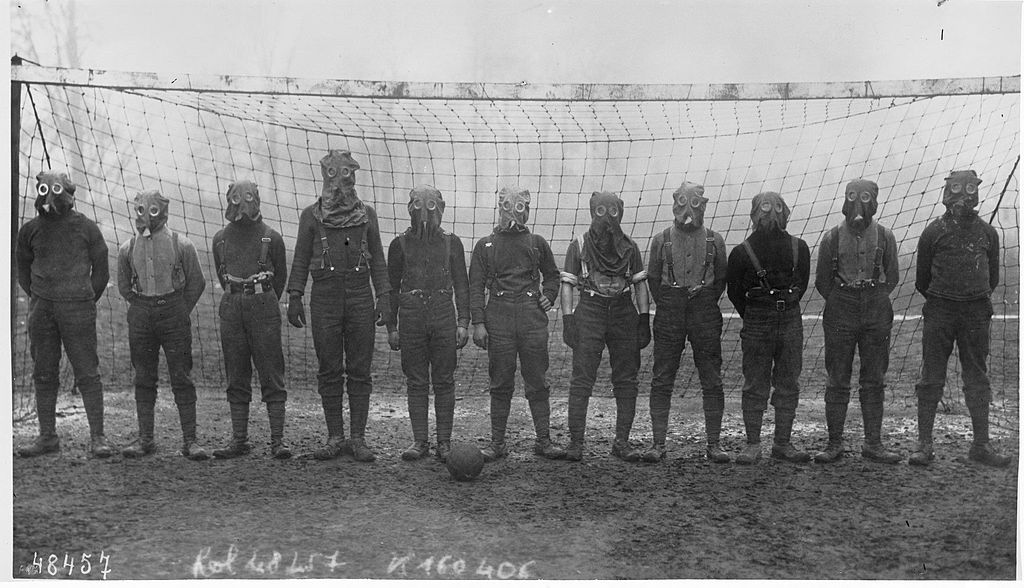 The first cylinders of German chlorine gas were released on Allied soldiers during the Second Battle of Ypres, in northwestern Belgium, on April 22, 1915. The soldiers were Algerian and Moroccan, colonial forces fighting for France. The Germans — this is how sophisticated chemical weapons were in the first year of World War I — used the wind as their delivery mechanism; they simply opened several thousand containers of the poison and let the breeze convey it toward the enemy. When combined with water, chlorine gas turns to acid. If you inhale it, first you smell pineapple, then your lungs burn away from the inside. If it gets in your eyes — well, you can imagine. It’s heavier than air, so at Ypres a dense yellow fog of it settled in the French trenches. The soldiers crawled out onto the field to escape the gas. The field was being strafed with German machine gun fire.

Hundreds of troops, perhaps thousands, died within the first few minutes. (Some of them were German; wind is not an ideal accomplice when it comes to dispersing clouds of death.) But the battle dragged on for days. It was still being fought on April 24, when, 350 miles away in Manchester, England, Sheffield United played Chelsea in the final of the 1915 FA Cup.

There is a very moving photograph that survives from this match, which is remembered as the Khaki Cup Final because so many of the 50,000 spectators were soldiers. The photograph shows a group of wounded men watching the game, wearing heavy military overcoats whose collars have been turned up against the rain. The men’s backs are toward us. The only face we see belongs to a youth with a heavy bandage wrapped around his forehead, his peaked cap resting uncertainly atop it. A white light falls on the mass of spectators, which blurs into indistinctness; the wounded men, standing a little apart, form their own pocket of deep shadow. 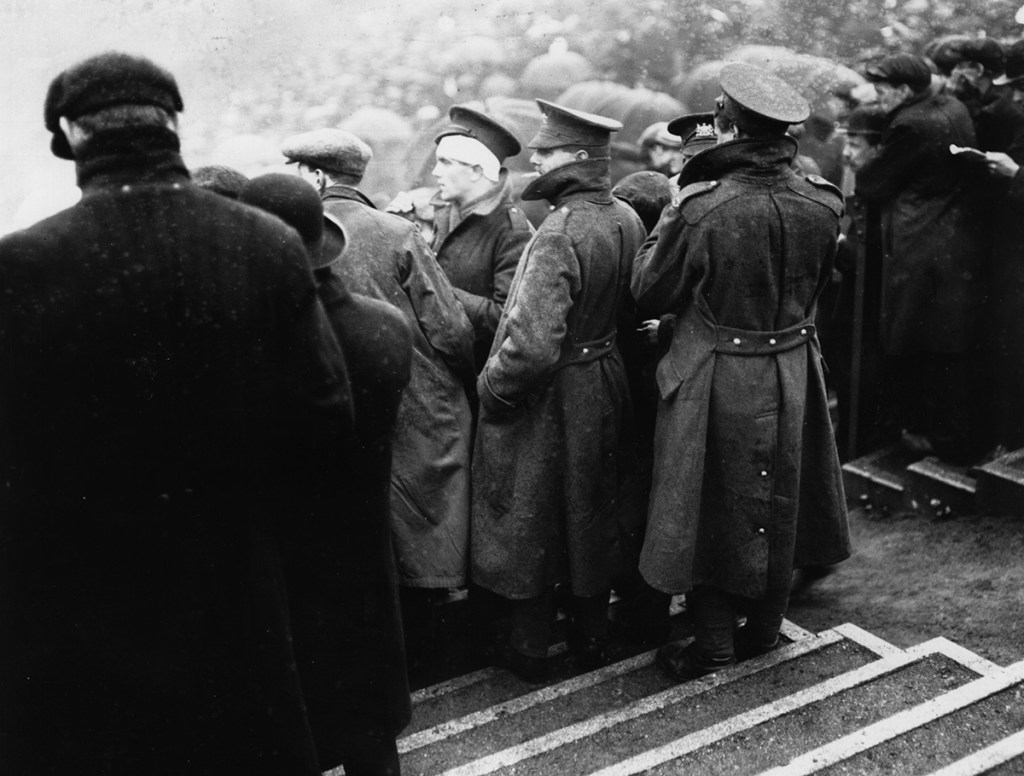 Looking out at something we can’t see — the pitch is not visible in the frame — the men seem to float between two worlds. One lies directly below, where the teams are playing. The other lies near Ypres, where German forces are gassing a division of Canadians who have been sent to reinforce the line. On one field, Sheffield United beats Chelsea 3-0 to win the Cup; on the other, the Canadians discover that pissing into a rag and then holding the rag to their face can counteract some of the effects of the toxin. The photo is so moving because it makes it so clear that these things were happening at the same time.

The history of soccer in the First World War — which began in earnest 100 years ago this month — is a history of two worlds in unresolvable tension. It’s the story of a failed metaphor. Soccer was everywhere during the war, played by soldiers and sailors, played by women working in munitions factories and by men in prison camps. The poet Siegfried Sassoon, who served as an officer on the Western Front, read football news aloud to his men to keep them calm before an attack. During the famous Christmas Truce of 1914, when English and German soldiers came out of their trenches and mingled in no-man’s-land, a German introduced himself to a British corporal with a word about Tottenham and Arsenal.1 Elsewhere, using caps in place of goal posts, the 133rd Saxons played an impromptu game against British troops, which the Germans won 3-2.

Soccer’s enormous popularity made it an invaluable tool for propaganda, especially in England, where the game was seen as a kind of extension of the national spirit. One recruiting poster showed a stout English boot kicking a Union Jack–emblazoned ball smack into the nose of the kaiser, who’s depicted as a diminutive goalkeeper. “Goal!” the poster reads. “What the 25th Div. Cyclist Co. are going to do!” Another showed a group of British soldiers frolicking (there’s no other word for it) through a field, over a little poem:

They speak of stopping Football,
To do so would be droll.
Now “Tommy” plays the game himself
With Berlin for his goal.

The men are kicking a German helmet like a ball through the grass.

Late in 1914, a member of Parliament formed the Football Battalion, a special unit made up of professional footballers and referees, including the entire Clapton Orient team. Fans were allowed to join in order to serve near their idols. The battalion served at the Somme and in other battles. More than a thousand of its members died during the war, including 462 during the Battle of Arras in 1917 — a battle that produced an estimated 285,000 casualties.

Fighting on the scale of the Great War is essentially incomprehensible, like the atom or the spaces between stars. Its extremity defeats the imagination. You can say “16 million dead,” but what’s 16 million? You can picture the lunar hell between the trenches, the broken trees and craters; you can try to fathom the misery of life in the armies, where rats outnumbered men. But these are conventional images. It may be that all you can do is to sift through fragments, to search for illumination in unexpected places. Sixty thousand men vaporized in an afternoon is inconceivable, but you can find a statistic that makes you catch your breath. This one is eloquent: In August 1914, a British recruit had to stand 5-foot-8 to be accepted into the army. In October, the limit was lowered to 5-foot-5. By November, it was set at 5-foot-3.

Or you can notice, say, the prevalence of soccer balls in group photos from the war. They’re everywhere. You’ll see the Isle of Wight Rifles, 8th Battalion Hampshire Regiment, posed around a cannon, jaunty and smiling, their hats on crooked — and a football tucked between the feet of the man in the center. The football is there because the men like football, of course. But there’s a deeper reason, which is that the men are trying to see war as a game. 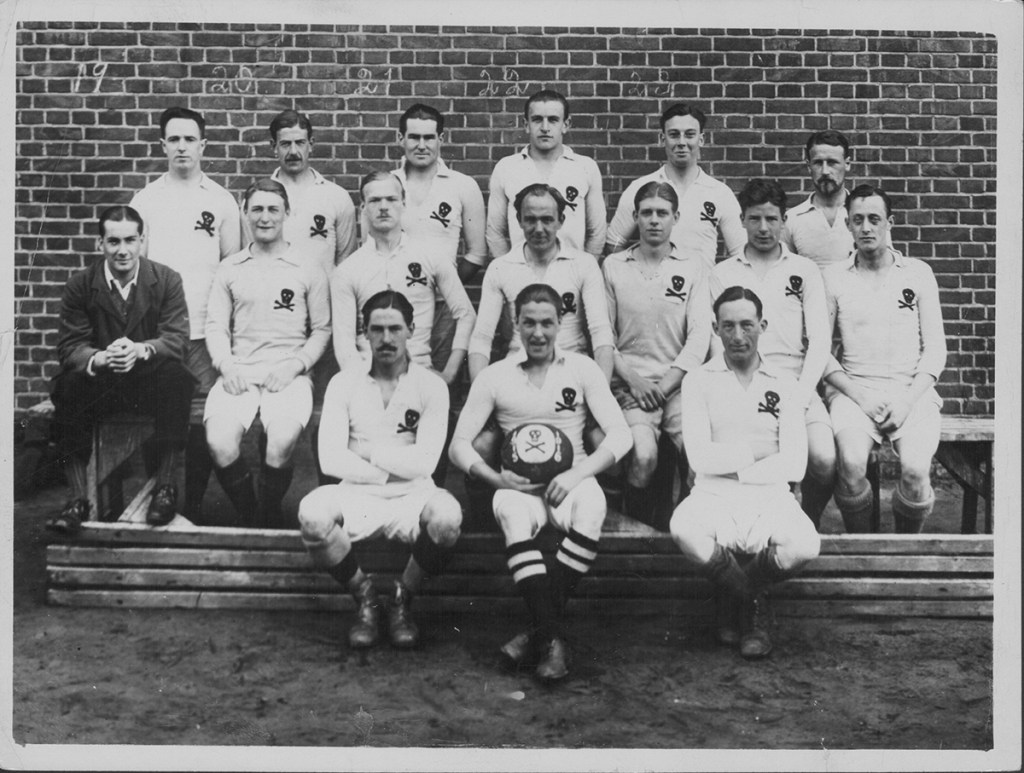 This is what I meant when I said that the history of soccer in World War I was the story of a failed metaphor. I meant that the boundary between the sport and the war was not fixed, that soccer was not merely a recreation or a morale-boosting pastime but a constitutive element of how the war was understood by the people to whom it happened. It was deliberately offered as a way for the soldiers to understand their own experience.

Like all wars, World War I was supposed to be over by Christmas. Unlike in some wars, though, people — at least at first — thought it really would be. The fighting began in a spirit of innocence that proved as lethal as poison gas. It had been a hundred years since Britain’s last great war, and modern athletic culture had arisen in the meantime. The conflicts of the 19th century, as Osbert Sitwell tellingly wrote, were “only a brief armed version of the Olympic Games.” War was a sport, like rugby or cricket; you would enlist, have a lark, win glory on the field, and come home a laughing hero. At Marlborough College, according to a contemporary report, the boys saw the war as “a glorified football match in which, if peace did not come, they might take their places in the England team.” Lord Northcliffe, the British newspaper magnate, praised English tank crews for fighting “with the same cheery enthusiasm as they would show for football.” After the chlorine gas at Ypres, the Germans were criticized in England for having an unsporting idea of “playing the game.”

Soldiers would kick a football back and forth as they charged out of the trenches during assaults. On July 1, 1916, at the Somme, Captain Wilfred Nevill gave each of his four platoons a soccer ball and promised a prize to the first one to kick its ball to the German front line. A survivor remembers the start of the attack:2

As the gun-fire died away I saw an infantryman climb onto the parapet into No Man’s Land, beckoning others to follow. As he did so he kicked off a football. A good kick. The ball rose and travelled well towards the German line. That seemed to be the signal to advance.

Captain Nevill was obliterated in the fighting. But the attack, which was christened the Football Assault, became famous. Nevill’s East Surrey Regiment even became the subject of a poem, called (of course) “The Game.”

On through the hail of slaughter
Where gallant comrades fell,
Where blood is poured like water,
They drive the trickling ball.
The fear of death before them
Is but an empty name;
True to the land that bore them
The SURREYS play the game.

“Gallant comrades” who are “true to the land that bore them” — this is the voice of the sentimental world that walked willingly onto history’s first industrialized battleground in 1914, thinking it was in for a kickabout. Philip Larkin, looking back at that world decades later in his poem “MCMXIV,” compared a line of men waiting to enlist to a crowd outside a soccer stadium. “Never such innocence again,” Larkin concludes.

War annihilates innocence, and no war more than this one. The paradigm of a merry sporting contest utterly failed to capture the barbarism of the fighting, at the cost of God knows how much trauma. Still, innocence is persistent. You can see this in other, later photographs from the conflict, photos in which the play world of the game and the reality of war stand out against one another in nightmare relief. You can find images of men playing soccer in gas masks, looking not-human, looking like science-fiction monsters, mouthless and insect-eyed and still playing. You can find images of soldiers playing soccer on crutches, men with limbs blown off, still chasing after the ball.

Never such innocence again. But we still make the same mistakes, because we still understand war through analogy and our analogies still fail. Now we see it as a video game, or we see it as a component of the NFL’s set of minor paraphernalia, jet flyovers part of the same combo pack that includes beer commercials and classic-rock riffs. We’re still trying to make the metaphor work, only now we’re doing it in reverse, endlessly describing games in terms of who conquered/eviscerated/bombed/slaughtered whom. It’s the same old trick, though. It’s a way to hide the horror under one layer of spectacle and another layer of moral virtue — a way to pretend that war is like a game, that there are rules, that there is safety. A way not to look into oblivion. We missed the cruel irony in all those soccer balls that show up in World War I photos. Nothing is a metaphor for war. War is a metaphor for nothing. 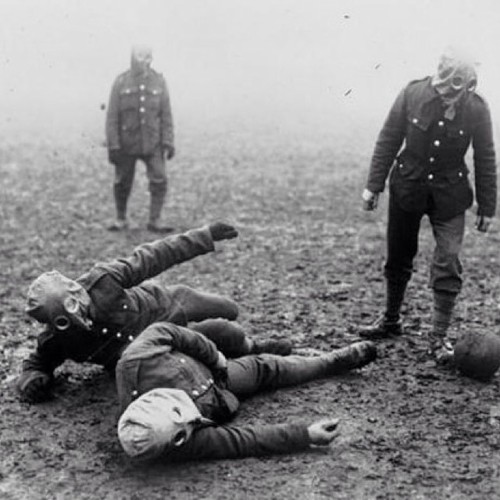