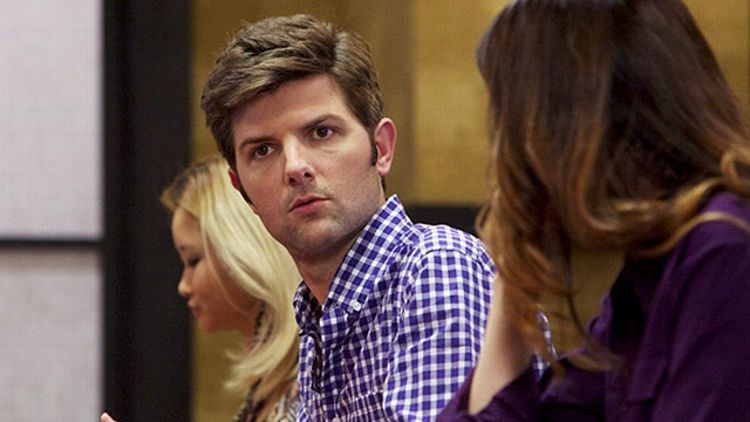 The first thing you should know about comedic actors is that most of them really want to act dramatically. The second thing is that, yes, A.C.O.D. is infinitely better than R.I.P.D., but that’s not asking very much. The third thing, which is really the first and only thing you actually wanted to know, is that A.C.O.D. stands for Adult Children of Divorce. Adam Scott, lately of Parks and Recreation, plays Carter, the titular adult child of divorce. In a plot that sounds more convoluted than it plays, Carter finds out he was part of a landmark study conducted by a flaky pseudo-therapist (Jane Lynch) on the emotional issues suffered by kids whose parents split up. The feuding parents are played by Richard Jenkins and Catherine O’Hara, who find the humor in even the most intense screaming matches. It’s like The Squid and the Whale mated with a Restoration comedy and a ’70s sitcom.

A.C.O.D. tries to be a lot of things at once: a dramedy, a farce, a sex comedy, a sensitive emotional drama, a cynical rom-com, a late-coming-of-age movie. It’s pretty good at all of them, if not outstanding at any. The movie is anchored by strong performances, particularly from Scott, proving he can carry a movie. Scott is an understated actor, and A.C.O.D. works best as a character study about Carter, whose attempts to keep the dueling halves of the family together keep backfiring on him. Instead of the man-child stereotype that is still so rampant in comedies, Carter is its converse — the overly responsible type-A guy. Carter is sort of the male version of that time-honored female rom-com character, the career girl whose emotional compass is wired completely wrong. Scott excels at playing struggling, but also at playing smug. In A.C.O.D. he’s the former, surrounded by an extended family who fall into the latter category.

Carter’s issues stem from his parents’ traumatizing divorce, which more or less ruined his childhood. Instead of falling apart, Carter turned toward what psychologists call parentification, where a child ends up parenting his or her own parents, who are too immature or irresponsible to parent their own children. Carter’s parents have each had several relationships since the marriage ended, and his father is currently married to a comparatively much younger woman named Sondra, played by Scott’s Parks and Recreation wife Amy Poehler. Insulating Carter from his excruciating family dynamic is his kind and patient yoga instructor girlfriend, Lauren (the appealing Mary Elizabeth Winstead). In his idealistically clean white tennis shoes and corduroy professor jackets, Carter is desperately trying to create the stability in his adult life that his childhood lacked.

Carter and Lauren have been together for four years in a partnership they both agree doesn’t have to involve marriage to be meaningful. Carter is understandably hardened against the institution of marriage by his family’s history, and he sees his own marriage prospects as a fateful prophecy best left unfulfilled. When Carter’s younger brother Trey (Clark Duke) decides to marry Kieko (Valerie Tian), his girlfriend of four months, Carter’s staunch values system is called into question. Be honest about his feelings, and he risks being labeled a Debbie Downer. Suck it up and pretend to be happy, and he’ll have to contend with alienation from his real, cynical self.

Everyone in the movie’s story lives in an unidentified yuppie suburb that I later IMDb’d to be Atlanta. It takes place in a mostly white, upper-class milieu where people have lake houses and repressed emotions. It’s halfway between a Woody Allen movie and Arrested Development. It gets at some really big issues, but lightly. What is commitment? Why does love end? What makes a family? There are a few too many montages set to indie rock, but that’s something for first-time director Stu Zicherman to work on. Zicherman wrote the screenplay with former Daily Show writer Ben Karlin, and it’s both extremely formulaic and surprising in parts. It’s hard to imagine how it would all play without Scott, who plays Carter as a stressed everyman, in a similar vein to his Party Down character Henry Pollard.

Step Brothers was Scott’s true breakout role after logging decades as a working actor, followed by Party Down, which showed he could play a likable leading man as well as he could embody douchebag Derek. Scott, like his friends Jon Hamm and Paul Rudd, came into his own as a leading man at a relatively advanced (in actor years) age. As a young actor he made the rounds on network procedurals and had his first truly memorable gig as a bully named Griff Hawkins on Boy Meets World. He did the requisite horror movies (“Jacques” in Hellraiser: Bloodline), played a redshirt (“Defiant Conn Officer” in Star Trek: First Contact), had an arc on Party of Five, was on a failed Kevin Williamson show (“Phillip the Coffee Boy” on Wasteland), and dated David Fisher on Six Feet Under. In 2004, Scott was cast as Howard Hughes’s friend Johnny Meyer in Martin Scorsese’s The Aviator, holding his own in his scenes with Leonardo DiCaprio. He was a candidate to play Jim on the American version of The Office, and was in HBO’s one-and-done Tell Me You Love Me, where he played an insufferable prick so convincingly I didn’t recognize him from it until much later. He was on the verge for years.

Scott paid his dues as a working actor of “hey, it’s that guy” status for many years before ascending to the “hey, it’s that Adam Scott guy” level. Being an unlisted actor (that is, not A, B, or C) is intensely humbling. Scott has 83 credits to Rudd’s 84, but Scott never had the benefit of an early Clueless-level breakout. His Party Down character is haunted by a catchphrase from a beer commercial, his one and only big success now long gone. Scott tolerates similar kinds of jokes about sharing his name with the Australian golf champ Adam Scott with good humor. On Scott’s Reddit AMA for A.C.O.D., 24 users asked some variant of “How did it feel to win the Masters?” He answered the first one “Like anything else” and patiently ignored the rest.

A.C.O.D., like its lead, is charmingly scrappy. So far it’s only playing in one theater in Los Angeles, attached to a mall that was completely deserted when I wandered through it killing time before the movie began. The acronym movie title is so vague until explained that some people might never bother to learn what it means. A.C.O.D. will probably find its true audience on iTunes and Netflix, viewed from the comfort of couches and beds. It’s impossible to read the cast listing, which includes Poehler, O’Hara, Jenkins, Jessica Alba, and Lynch, and not be a little bit intrigued as to how that will possibly work. It’s not an exceptional movie, but it’s a very comfortable one, and I’d definitely recommend it to friends. There are lots of little moments from the cast that made me laugh, even if some of the big set pieces didn’t go over.

Scott’s next big gig, after a third installment of The Greatest Event in Television History (an elaborate televised inside joke that is very satisfying to watch), is a co-starring role in Ben Stiller’s The Secret Life of Walter Mitty, followed by Hot Tub Time Machine 2, where he seemingly replaces John Cusack’s character. Scott has proven that he thrives in ensembles. He was a highlight of Friends With Kids, had a great spot on Eastbound & Down as a sleazy agent, and made a perfect Jake Ryan for Lizzy Caplan’s misanthropic bridesmaid in Bachelorette. He played it totally straight in small indie The Vicious Kind. He has already shown a very wide range.

Caplan, Scott’s Party Down teammate, has been proving herself as a serious actress on Masters of Sex, outside the context of the majesty of Mean Girls’s Janis Ian. We’re willing to take Scott seriously, too, as long as he promises not to abandon comedies entirely when Lars von Trier (or whomever) comes to call. A.C.O.D. shows off Scott’s versatility, charm, and chops. Credentials? Yeah, he’s got some credentials.