How to Pick an NHL Team 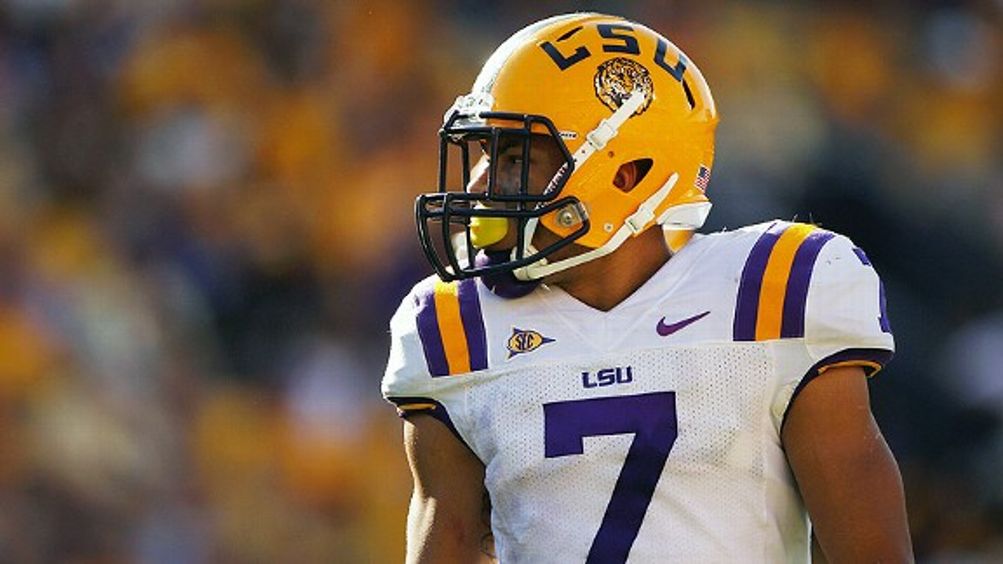 Hunk of the Week (Throwback Edition)

And this time I really mean ladies, as opposed to girls. I mean full-grown, full-fledged American women. I mean y’all with kids to fill that SUV, not you sorority girls driving around in a Land Cruiser for the apparent purpose of toting a Jack Russell Terrier across campus. If you’ve got a mortgage, I’m talking to you, sister. If you can paint your nails and get the dinner prep under way and pay some bills online and wrap a gift for this weekend’s shower (there’s always a shower of some kind you can’t get out of) and answer a work e-mail and get the dry cleaning together, and do it all while your toddler takes a nap — the alumni, the real-worlders — to you I present Fast Willie. He’s smooth as a chocolate swirl. He dances a little funky, so watch him, girl. He specializes in taking cornerbacks out of their comfort zones, and he can snatch you out of that married-life rut. Willie doesn’t bother making a play (20 yards per catch in the NFL, lifetime) unless he’s got a chance to score. He likes to go deep (falling into some sexual innuendo here, I think — who can tell anymore?) and he likes to take it to the house, so leave those French doors that open onto the patio unlocked and send the kids to your mother’s and prepare for a go-route to ecstasy. Did you ask for more romance? Well, here’s your Volunteer. And if your husband comes home early it’s not a concern, darling. Nobody catches Fast Willie.

Oklahoma State at Texas — I refuse to believe that Texas will not make a game of this. The flagship of football for the nation of Texas will not get whipped two straight weeks by teams from Oklahoma. I won’t hear of it. I know Blackmon’s better than everybody else, but Texas will show up with some pride at home against the Cowboys. Forget the quarterbacks and receivers — I’m talking line-of-scrimmage pride. Oklahoma State has no lesser goal this year than winning the whole thing, and for Texas a win prevents this season from turning into another lost campaign. That makes only two, I know, last year and this, but that’s a lot for the Longhorns. They should never have a lost campaign. A quarterback flaming out when he should be in his prime. A defense that often doesn’t seem up to the physical challenge. Scheming that seems a half step behind. Boy, this shit sounds familiar. It stops Saturday, Texas. You can’t snap your fingers and make yourself tougher, but you can nut up at home and get off blocks and say enough’s enough. And you will. And this will be a hell of a game.

LSU at Tennessee — College football is due for this sort of upset. The Vols don’t have Tyler Bray or Justin Hunter, but their best chance is to be underestimated, so maybe that works in their favor. Matt Simms makes his dad proud in this one. LSU is plagued with penalties and misses two field goals. Jefferson comes in for a series and throws a pick. Tennessee gets revenge for last year.

Well, it’s pretty to think so, anyway. Start with this one and then you can switch over to the Texas game if things get out of hand. If they both get out of hand, take your wife or girlfriend for a stroll around the block. She’ll be shocked. You’ll get points.

Arizona State at Oregon — Not sure there’s anything at stake here, since the loser can still blaze a trail to the inaugural Pac-12 championship game, but this is the perfect late game for you East Coast fellows. You’ve already watched 10 hours of football, eaten several pounds of salted fat, and kept yourself on a Foster’s drip all day. You’re horizontal on the sectional. Basically, if there’s not a touchdown or a turnover every two minutes, you’re dozing. Oregon will not only score touchdowns, but to keep you interested in the brief pauses between plays, they’ll also hold up posters of basketball coaches, chemical compounds, mega fauna, cartoon characters, etc. They’ll put pressure on the Sun Devils to match them score for score, and that’s when it gets fun.

What’s With Them Dudes?

Ran up against nothing but cordiality walking the LSU campus last Saturday!?!? I thought they were supposed to be a bunch of assholes. What’s with them dudes being nice? Odd feeling, disappointment at being treated civilly. Mostly, I happily absorbed the family-friendly, almost quaint call of “Tiger Bait.” A couple of older fellows rested a hand on my shoulder and told me to have a good time. There was one rogue element, a very young girl — I can’t tell how old they are anymore, young girls — who may have been a freshman who staggered by with moist eyes and screamed at me in a way that turned her face redder. I can only imagine her angst was romantic rather than football-related. The LSU fans are just so damn happy with their no. 1 team. It was a 2:30 p.m. game, so they were buoyantly buzzed rather than demented with liquor, as they would’ve been for a 7 p.m. kickoff. They’ve got their Honey Badger T-shirts for pregame, and the Honey Badger himself during the game. (Not the wieldiest moniker, but appropriate to the player and one of the least likely zoological nicknames you’re going to hear, and also downright cute.) That’s Tyrann Mathieu I’m referring to. Three-star recruit. I just love when the unheralded guys become stars — we had a little safety not dissimilar from the Honey Badger named Ahmad Black. On top of the no. 1 ranking and the early game time and the Honey Badger, it was also a beautiful day, warm but not hot, but what really diffused the whole thing, what kept the stadium from shaking with Richter-registering full voice, what drove away all traces of tension from the tailgates, was that Florida never had a shot at winning. None.

Florida would not have had a shot if it’d had its fifth-year senior quarterback, and it certainly would not have had a shot with its true freshman heir apparent Jeff Driskel — who’s never started a game — but then Driskel got hurt late in the week, and it sure as HELL didn’t have a chance with a true freshman who got on campus a couple of months ago and hadn’t played a snap. (That’s Jacoby Brissett. The reason he’s not the heir apparent is he didn’t enroll in the spring, and also he plays basketball. There’s nothing I hate more than a quarterback playing a second sport. Well, I’m sure there are a lot of things I hate more than that, but I resolutely dislike it.) Then the game started and we all saw it was much worse than mere QB troubles. The Gator defense was the scout team, just like last week against Alabama. The defensive line was pushed aside and the linebackers dragged seven or eight yards on each running play. UF ran a fake punt and it failed, then a few minutes later the LSU punter scampered for 50 or so yards down the sideline. No hope for the orange and blue sliver of Tiger Stadium; we sat and took our sunburns like good Floridians. The only silver lining would’ve been valuable experience in a hostile environment for Driskel, but that had been taken away. I was reduced to making calculations about how soon was too soon to leave and get back to New Orleans, how long I had to remain in a place (Tiger Stadium) where fun would not be possible before I could return to a place (The French Quarter) where fun is unavoidable. Hey, you guys are going to be proud of me. No Outback. How about that? I ate fried chicken and white beans and raw oysters and an oyster po’ boy and pecan waffles. I am culturally ashamed, though, to have chosen to skip a second line parade in favor of watching the Saints on TV, where I saw Cam Newton doing a bunch of the same things he did in the SEC. But the Saints won anyway, so all is well in Louisiana.

The Book: The Tennis Handsome
The Author: Barry Hannah
The Sport: Tennis
The Dope: If you don’t know Hannah, he’s a one-of-a-kind writer. More than anyone else you think is a one-of-a-kind at something. It’s hard to say where he came from as a writer. As a person, he came from Mississippi. He died about a year and a half ago. Robert Altman once flew him out to L.A. to write a screenplay and provided him, for use as a studio, a room on the top floor of his Malibu mansion. After three days without getting a word down, Barry turned the desk away from the ocean and toward an interior wall and brought in an old radio to drown out the waves and smoked a pack of cigarettes to sully the salty sea air. There are many tales of Barry’s raucous rock-star escapades, but I like that little Robert Altman thing.

Instructions: Do not worry about where this book is headed in the big picture. Simply enjoy the page you’re on. There’s nothing even vaguely like filler and little that one would want to describe as explanation, because “explanation” sounds so calm and civilized. This thing is kinetic. It gets to the heart of things quickly — things you weren’t even aware were under examination — and then leaves them behind. It gets into the soul of tennis in a way that’s astounding, and once you’re done with this short novel you’ll agree that no one needs to write any more fiction about this particular sport.

It’ll take you 30 or 40 pages to get used to Hannah, but it’ll be worth it. If reading a regular book is like getting on a plane to Detroit and winding up in Detroit (which is good because you’ve got business in Detroit and a hotel room booked and one of your old buddies lives there now and you’d like to meet up for a beer with him), then reading The Tennis Handsome will be like getting on a plane to Detroit and winding up in Bilbao, Spain. It’s an inconvenient turn of events because you’re going to miss your meeting in Detroit and you’re not going to see your friend and you don’t speak Spanish and what the hell time is it and who knows when there’s another flight back to the States and they’ve never even heard of Outback Steakhouse. … If you just look around and take a breath, you’ll realize that Bilbao, Spain, is better than Detroit. Forget Detroit. Buy some comfortable clothes and order some Tempranillo and tapas.

Previously from John Brandon:
Oklahoma vs. Texas, a Letter to Les Miles, and a Hard-To-Get Hunk
Tide vs. Gators, the Problem With UVA, and a Nice Steak in Tucson
Hunks, Books, and Clemson vs. Florida State
Open Season
Dear Coach Pelini
Dear Coach Tressel
Go Irish?