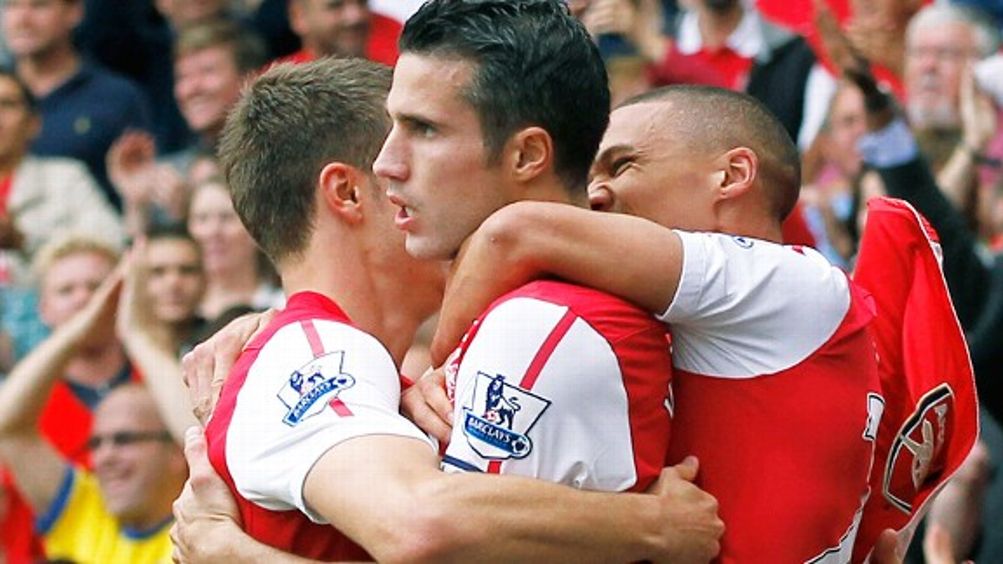 Game of the Week: Tottenham 2, Arsenal 1

It might not be totally accurate to compare Arsenal’s Arsene Wenger to Breaking Bad‘s Walter White, but I couldn’t help but think about the pair on Sunday night; both men are trying to dig their way out of precarious situations. And I’m not sure either has the tools to do so.

Arsenal lost to its archrival, Tottenham, 2-1 on Sunday in the North London derby. The last time these two sides met, Twitter broke, grown men cried, and the lights went out in Georgia, as Spurs and the Gunners Gatti-ed and Ward-ed their way to a 3-3 draw.

That is electric football; you take a game like that, gather your friends around a screen, give them beer, and say, “This is why this is the best sport in the world.”

Sadly, Sunday’s match at White Hart Lane came nowhere near the altitude-sickness-causing heights of that game. In fact, the first North London derby of the season had football fans feeling pretty low.

This was a tough game to watch (and not just because of Bacary Sagna’s injury, an ankle break that will likely keep him out of action until possibly January), and it was even harder to listen to. The football was pretty stale. Rafael Van der Vaart’s first goal looked a lot like a handball in the box. Aaron Ramsey’s covered up the fact that the Welsh midfielder had an otherwise forgettable day. Kyle Walker’s thunderbolt winner was incredible, but it also seemed (a) inevitable, and (b) as much about Arsenal’s defensive collapse.

After the end of the game I wanted to think about what I saw, specifically the fascinating action in midfield. I wanted to revel in Scott Parker’s making tackles and making the facial expression after each that suggested, bemusedly, that he could do it all day (he did). I wanted to go to the tape and review Mikel Arteta and Ramsey clearly not knowing who was supposed to advance and who was supposed to distribute. I wanted to note Spurs boss Harry Redknapp’s outwitting Wenger by pulling attacking midfielder Van der Vaart after about an hour and replacing him with the grittier, Brazilian Sandro, right when it looked like Arsenal might be putting something together following Ramsey’s equalizer.

I wanted to think about whether you can feasibly call Theo Walcott a winger, whether Robin Van Persie is already thinking about real estate opportunities in Manchester or Milan, whether Andrei Arshavin is trying to translate the deadpan comedy of Steven Wright to the football pitch, whether Gervinho knows you can pass the little round thing at your feet to another player wearing the same color shirt, and whether Van der Vaart’s shoulder cradle, prior to his goal, was against the rules or a football version of the LeBron crab dribble.

Instead, sadly, I thought about singing.

By the time Walker’s long-range shot went in to win the game for Spurs, anyone at the Lane or watching at home, while keeping an eye on Twitter, knew that some pretty vile shit was being sung by both sets of supporters. So outrageous were the chants — a frankly unbelievable and nauseating song about former Gunner and current Spurs forward Emmanuel Adebayor, and a grotesque old chestnut directed at Wenger — both teams needed to make a joint public statement condemning the behavior.

Directly after the match Wenger was involved in a little bit of a non-event with Spurs coach (and former player) Clive Allen. Wenger is notoriously aloof with his opposing coaches, and he apparently refused to shake Allen’s hand after the match. Allen chose to make a big deal about it.

You have to wonder how much more of this Wenger is going to put up with. This is a man who fundamentally changed the English game, who introduced the world to some of the most entertaining and beautiful football and players we’ve seen in the past 20 years. Don’t forget, Wenger is also the one who tried to create a financially sustainable and competitive model for Arsenal in the face of financial doping going on all around him. And what does he get? He is now the manager for a Manchester City and Barcelona feeder club who shows up to work every weekend to watch a team that seems to have stopped listening to him. And for good measure, thousands of bald men with personality disorders sing about him being a pedophile. Seriously, life is too short and this is just a game. And on Sunday, it wasn’t anywhere near beautiful.

Off the Pitch: I Gave You Power

Where Wenger seems to be dealing with the chronic crisis atmosphere hanging over his club with reason and intellect (or whining and sore losing, depending on how you look at it), Manchester City boss Roberto Mancini is powering through the latest controversy surrounding his star forward, Carlos Tevez, by trying on his Scanners face.

Tevez decided to throw a little protest last week, refusing to enter a Champions League match away at Bayern Munich in which City was losing (and lost) and could’ve desperately used his dogged, direct style of play. When called upon by his iron-fisted Italian manager to enter the match, Tevez chose instead to #occupythebench.

Mancini reacted in a super-restrained and measured way, announcing postgame that Tevez will never play for City again. Tevez said this was all a big miscommunication. After that, City launched an investigation, which I hope ends in City midfielder Gareth Barry bellowing, “DID YOU ORDER THE CODE RED?!” and Roberto Mancini responding, “Lei è maledetta corretto che ho fatto”

Col. Nathan Jessup jokes aside, this is the second major off-field controversy to hit City in as many months. In September, City executive Garry Cooke was forced to resign following the leaking of an e-mail in which he mocked a player’s parent who was suffering from cancer. Now this whole Tevez thing is coming to a head. Again.

Carlos Tevez, on form, is one of the world’s top 10 forwards. His stay in English football has been blindingly good on the field, and tumultuous off. He is a player who can single-handedly rescue a team’s season (like he did for West Ham in 2007). But he is a nomad, moving from club to club after a season or two, driven by his shadowy consultant, Kia Joorabchian.

From what I can best gather, Tevez and Mancini simply do not like each other. Tevez tried to get out of City over the summer, failed, and now Mancini is making him pay for it. Unless Tevez wants to play at the newly rich Anzhi in scenic Dagestan,1 I don’t really know where he’s going to go that pays him in the fashion to which he has become accustomed.

What I do know is that this struggle could mean more to Mancini’s future at City than the result of the Manchester derby next month. Mancini has essentially staked his reputation on City’s success as a matter of when, not if. The question is really, is Roberto Mancini Doug Collins or Phil Jackson? Is he the manager who guides Man City to respectability and competiveness? Or will he be the one who leads them through years of greatness? His temperament suggests the former.

• Lost among all this talk of top teams and top managers and code reds were excellent performances from Newcastle and Fulham. The Cottagers annihilated QPR 6-0 in West London and were nowhere near as cantankerous as their North London counterpart. Fulham boss Martin Jol needed some goals, so he played all his goal-scorers. At once. Fulham lined up with four forwards — Clint Dempsey, Bobby Zamora, Moussa Dembele, and hat-trick hero Andy Johnson — overwhelming a shaky QPR defense.

• Newcastle continues to be one of the success stories of the year. The fact that I wrote that sentence and have not yet been committed to Shutter Island must mean it’s true, but it doesn’t make it any more believable. Is it possible that this man actually has a plan? Newcastle, because of or despite owner Mike Ashley, has successfully overhauled its squad in the face of almost universal ridicule. But the Magpies are having the last laugh with a team led by the smart midfield play of Yohan Cabaye, the heroic keeping of Tim Krul, and the goal-scoring of Demba Ba. The return of Hatem Ben Arfa will only make them more creative and threatening in attack.

• While Manchester United and Man City continue their never-ending party at the Hacienda at the top of the table, Chelsea is gaining ground on them. Andre Villas-Boas seems to have gotten the midfield shape he wants — with Raul Meireles playing in the Michael Essien role, and the tough love the first-year boss showed Frank Lampard coaxing a hat trick out of the English veteran — albeit against a relegation-bound Bolton.

Quote of the Week: Carlo Ancelotti

The former Chelsea boss has been making waves this week, openly discussing his interest in the Arsenal and Tottenham managerial jobs despite neither being open. This sadly obscured Ancelotti’s truly important contribution to humanity this week: In the same interview, he gave some advice on how to deal with being confronted by a bear: “You shouldn’t run, because a bear is faster than a man, nor climb a tree because the bear will climb it, nor jump in the water because bears can swim. You need to walk backwards taking little steps.” This is just solid advice, people.