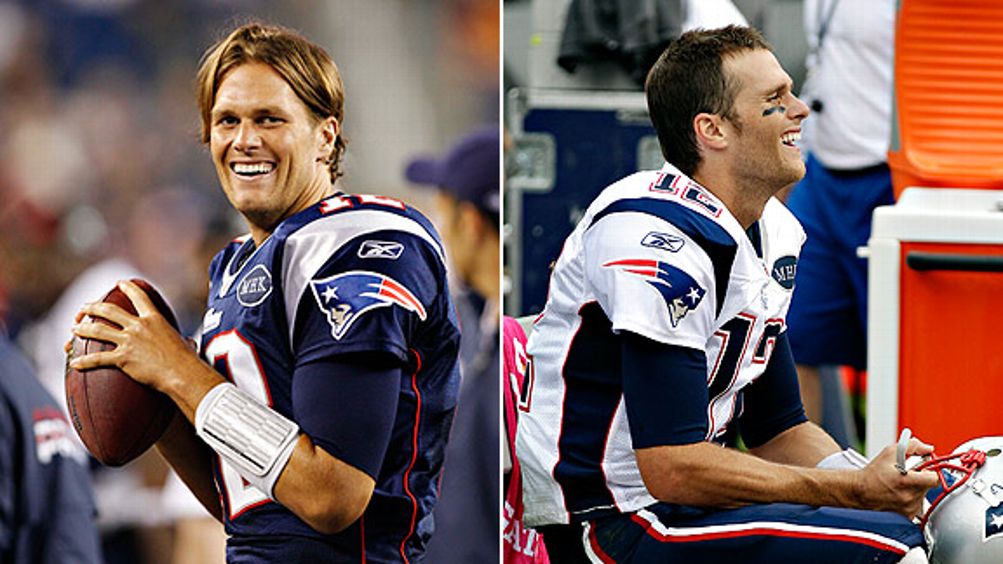 For some men, throwing an uncharacteristic four interceptions in one game would necessitate a real gut-check moment. They’d review film, talk to their receivers, go to Jesus. They’d ask, “What’s wrong with me?” Tom Brady knew what was wrong. He threw four interceptions, then HE cut his hair. Anyone who noticed sang “Hallelujah.” People wrote obituaries and burned scrunchies. Last Wednesday was a great day for people who hate ostentation, uniqueness, or style, for people who believe Brady had become too fancy for serious football. Lots of athletes get their hair cut in a salon. Brady’s crime was that he looked like he did. Last Wednesday, those people — people who love Tom Brady the quarterback, but bristle at Tom Brady the spokesmodel — celebrated an early Christmas.

But that hair — The Hair — was an exciting moment for the National Football League. When Brady arrived at training camp two summers ago, he came with a haircut that matched his risky approach to football: He was taking a chance. It was hair that said to men, “Guys, I’m not sure where this is headed, but let’s just see where it goes.” And so we took a journey that, more than a year later, ended unceremoniously. For a man who really doesn’t say a lot, the haircut said everything. It said, “I’m sorry.” It said, “You were right.” It said, “Gisele uses both blow dryers.” Brady asked the world to read nothing into it, which then allowed the world to read further while grumbling that he should also run for office.

You can see Brady’s point. Really, the new hair is just the old hair: a 3 on top, 2 on the sides; a Supercut. But it’s the hair of three Super Bowl rings and numerous Sports Illustrated covers. It’s the haircut of the Man Who Got Gisele. Brady was equally blasé in deciding to grow it out. During the preseason, he told reporters it was more or less an accident. “We’ve had two-a-days for the last three weeks. … This is what happens,” he said. “I passed that uncomfortable stage with it. Now, I’m just like, ‘Screw it, let’s just keep going.'” But it was always a little uncomfortable. Some days its fullness made him look like a cross between a Redgrave and Mrs. Doubtfire. Eventually, the pop star Justin Bieber went on the attack, all but crying copyright infringement.

The hair had volume. It had charisma. There were reasons to feel it deserved an agent. But it was never popular and frequently misunderstood. In a few men it had aroused traumatic discomfort. This is the hair that smacked your tray onto the cafeteria floor. It was the hair into whose locker your girlfriend not-that-secretly slipped “I like you” notes. How many hearts had that hair broken? How many wedgies had it given? How many times had you tried to have that hair only to wind up looking like a Santa Monica pot dealer or Shaggy after too many Scooby Snacks? The hair, in that sense, was an affront. How you felt about it also depended on the lens through which it was viewed. On the one hand, you could perceive Gisele’s influence. She had turned an All-American quarterback into a Brazilian beach bum, from Tom Brady to Gustavo Kuerten. On the other hand, as time went on, Brady’s hair had become loosely commonplace. On a bad day it was a poor man’s Clay Matthews or an elegant one’s Jeremy Shockey.

In deciding to grow it at all, there might have been a degree of calculation. Two years ago Mark Sanchez arrived in the league, and America began passing out. Even before he’d thrown his first football, he was the most drooled-over player in the NFL. Sanchez has a breathtaking handsomeness that’s both antique and of-the-moment — part 1930s movie star, part Bachelor Season 17 — and he has real, confident style. You couldn’t help but feel for guys who wanted a piece of Sanchez’s action. Perhaps without quite fully realizing what he’d done, Brady had entered the fray of grooming and personal style. For instance, he and a slicked-back incarnation of the hair are currently starring in ads for UGG for Men, a move that, however momentarily, manages to unite those who despise the Madison Avenue sideshow of American sports and those who despise the UGG Australia brand. But the company is determined to make inroads with American dudes, and choosing Brady to help blaze that trail is shrewd. Of course, Wednesday feels a bit like rejection of that Tom Brady.

It was increasingly unclear what exactly it was Brady wanted that hair to do, what he wanted it to say. It was statement hair, and the message, the adventure, the fun had all gotten away from him. Sports people whispered it wasn’t a leader’s haircut. Complaints that it was unmanly allegedly came from Randy Moss, whose cornrows turn into a Pam Grier Afro with impossible ease. That blown-lead loss against the Bills might not have been the reason Brady had his hair cut. Yet that he did at least suggests that the last year might have been frivolous — even the ferociousness he occasionally unleashed during the regular season now feels somehow experimental. In cutting his hair, he cut away the UGG campaign, the Bieber jokes, the insulting, paranoid idea that his wife is some kind of reverse Delilah. Sunday, against the Oakland Raiders, was his first game with the new hair, and Brady gave a routinely clean performance. He might not like us to talk about any corollaries. But this is back-to-business hair that denies us the right to speculate that Brady’s business is anything other than football. “Go long” can now apply only to his passing game.