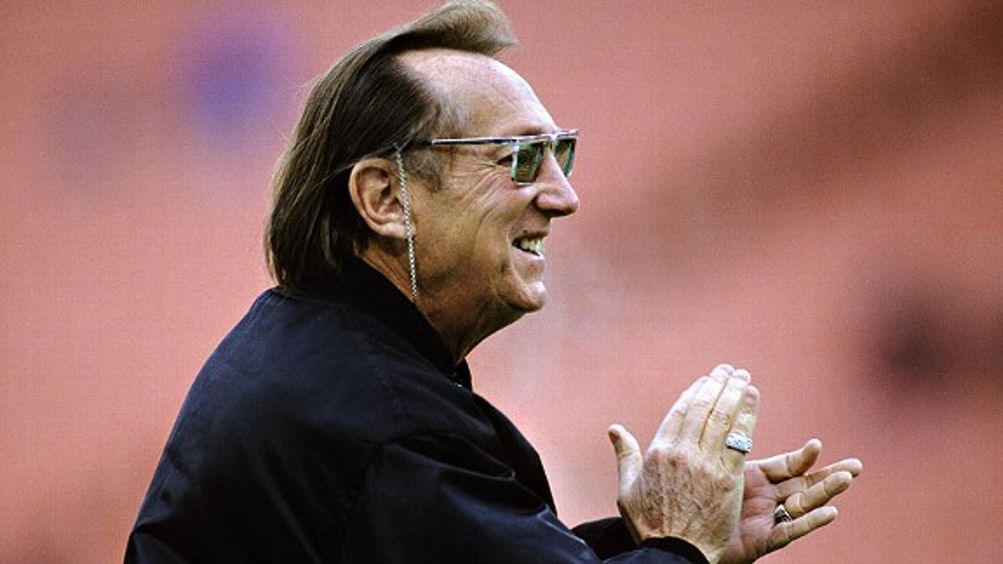 “A small wiry man in a tan golf jacket with a greasy duck-tail haircut who paced along the sidelines of both practice fields with a speedy kind of intensity … like a pimp or a track tout.”

That was Hunter S. Thompson’s take on the man, back in 1973, during the too-short month they hung together at Raiders practices talking about, according to Thompson, “foreign affairs.” (Jesus, how much would you pay for transcripts of those conversations?) After a few weeks, Davis banished the Gonzo king from the kingdom of the silver and black; Al, always the paranoiac, quickly decided he didn’t trust the man. But if you’re looking for an analogy for Al’s legacy, there you have it. What Thompson was to journalism, Al Davis was to professional football.

Forget the Darth Vader crap; comparing Al Davis to a Saturday-matinee-serialized sci-fi movie emperor would be like comparing the real Caesar Augustus to George Reeves. One’s a cartoon. The other actually … built an empire. “The Raiders wanted to have the greatest organization in the history of sports,” Davis said in his Canton induction speech for John Madden five years ago, and that’s as good an emperor’s manifesto as you’re ever going to find. Besides: Davis’ empire wasn’t evil. Just because Sonny Barger and gangs of various stripes have been drawn by the Raiders’ vibe doesn’t mean the man promoted maliciousness. He promoted domination and intimidation — and if sometimes back in the glory days his defensive backfield tried to kill people, much of the time they did not, because after a while they didn’t have to; receivers would curl up into a ball at their feet.

Yes, the man’s empire had been on the wane of late. For the past seven or eight years, hoping my Raiders might rebound, I couldn’t stop hearing the Keith Reid lyrics for Procol Harum: “The seaweed and the cobweb have rotted your sword; your barricades broken, your enemies lord.” But mistaking Al Davis for Davis 2.0, the steward of the dark era that began when he yanked his team from the East Bay’s desperate, hungry maw to try to make easy money down in the City of Illusion is to mistake the Salinger who wrote Catcher for the guy who later favored very young women, and ended up eating frozen peas for breakfast and spending a lot of time in an orgone box.

Which is not to imply that the late-era Al Davis was anywhere near as weirdsmobile as J.D. — just that by the end, like J.D, in his New Hampshire bunker, Al was long out of touch with the collectivist workings of the business of the sport that had fueled his passion. He countenanced no trusted advisors. Then, by definition, emperors seldom enlist people to sit by their side and second-guess them (“Caligula? Sir? You really think we ought to draft the wide receiver from Dayton who no one invited to the combine?” “Combine? What combine? Somebody cover this guy in pine pitch and set him on fire.”)

But we get one shot at assessing a pioneer’s legacy in the days right after his death, so this time let’s get it right. In the history of a sport that now dominates the cultural landscape, Al Davis is in the football Rushmore. And this is not in dispute. Feel free to argue about what other three old white guys who forged the game out of granite ought to be sculpted in a quarry somewhere outside of Pittsburgh; me, I’m going to lobby for the nose-forward, asymmetrical, Brooklyn-y profile of the man who not only won three Super Bowls and built teams so scary that no one wanted to play them, but literally changed the face of the game. Because, let’s face it: somebody had to.

There are a million stories about Al Davis and his pioneering ways in a league whose roots lay in post-WWII steel-mill towns and whose pre-Black glory days, despite the domination of Jim Brown and Big Daddy Lipscomb, thrived on a lunch pail litany of names such as Pietrosanti and Robustelli; Butkus and Modzelewski; McDonald and McIlhenny. But this is mine: One night in 1964, in Davis’ second year as the Raiders’ coach, an unnamed white Raider called out Fred Williamson for being with a Swedish woman at a table in the Miramar Club. Raiders running back Clem Daniels wanted to pummel the guy for being a racist; Jim Otto held Clem back.

The next morning, Davis called Daniels to his office to find out what had happened. “Then he gathers the team,” Daniels told me a few years ago, “and says, ‘I will not have this bullshit in this organization. If you’re doing shit like this, not only are you off the Raiders, I’ll get your ass out of football.’ And after that, there was never a problem on the Oakland Raiders.”

It wasn’t just Al’s scouting black schools like University of Maryland Eastern Shore and Tennessee State to find athletes such as Art Shell (whom he would hire, 20 years after drafting him, as the first black head coach in the modern league) or Eldridge Dickey in 1968 (the first black first-round draft pick in league history). It wasn’t just assembling, in the ’60s and early ’70s, a multiracial team that appealed to a multiracial second-sister city, wherein players of all colors would hang together at every bar from Castro Valley to Walnut Creek to Jack London Square, from Uppy’s to the Grotto to — always — Big Al’s Cactus Room, on 19th off Webster, named for Al Punzak, who stood 5-foot-2 and kept a loaded .45 under his pillow.

Davis 1.0 wasn’t a piss-ant megalo like Jerry Jones, or Andy Griffith in Kazan’s Face in the Crowd. This was a true game-changer who saved the rebellions for the big-time arenas, where they counted. He let his players do the meaningless venting, from the streakers at practice to the bar-top stripteases to the punched-out, plate-glass windows to the weed-smoking in the closet of the El Rancho Tropicana, a training-camp motel that only David Lynch could have loved.

Like the great emperors, Davis picked his battles to win the big wars. In 1966, when Pearly Pete’s gray flannel Lombardi League tried to swat down Al’s gnarly upstart band AFL — there wasn’t enough money to keep both alive — Davis revealed that his league has already signed a half-dozen NFL QBs to future contracts, and the CBS league caved. But Al was pissed as hell. Al wanted to grind Pete into submission. When Rozelle was named commissioner of the merged leagues, Al limped back to Oakland, where he took it out on the principal owner, a man named Wayne Valley, whom he detested, by wresting total control and ownership of the team, off an initial investment of … $18,000.

Here’s the cool thing about Al holding on until Friday night. He lived long enough to know that people had stopped laughing at his incompetency and started taking his team seriously. By the time Al’s soul ran into some ethereal authority figure, and he said, “You don’t want to admit me? F— you! I don’t need your afterlife! I got an afterlife over here that’s gonna kick your ass!” — his team, finally, was being referred to as a team with actual playoff possibilities.

Saving eventual face mattered a lot to Al Davis. I know this because I was granted an audience with him exactly two years ago. I’d come to talk about late ’70s Sundays on the East Coast when the NBC sun bathed my guys out there in some outlaw-loving luminescence — Biletnikoff’s eye black all vampiric, Tatum’s beard all Panther-y, Snake’s hair flapping like a happy freak flag. But at one point, without my asking about the current malaise, Davis said to me, “I know this: that I let it slip the last several years. That will tarnish a legacy that was tough to beat. But somehow or other I’ll get it back before I’m gone.”

Weirdly, mostly I remember the doors. The black doors to the windowless black-everything-ed office seemed to be about twice as big and heavy as they had to be, with silver handles that looked like huge Cosa Nostra cuff links. After they closed behind the assistant who’d led me in, there was sort of an airlock effect: It was me and The Man. I’ve interviewed thousands of men. I’d never interviewed The Man.

He was sitting at the end of a long table, wizened and frail, with a walker by his side. He was rheumy-eyed, and he had that late-stage Howard Hughes fingernail thing going on — all of which made him all the more intimidating. I mean, Augustus probably didn’t look all that good in his fifth decade of office, but that didn’t mean he hadn’t been an emperor you had to take seriously.

Before I could even ask him a question, he started to read from a copy of that Madden induction speech, because he wanted me to know from the start that it was Madden, the man whose winning percentage beat Lombardi’s, who should get all the credit. But within a second or two, he realized this was a stupid thing to do, and he slid the speech over to me, so I could read it myself later.

Previously from Peter Richmond:
Can Ryan Fitzpatrick’s Brain Save Buffalo?
The Architecture of Disaster