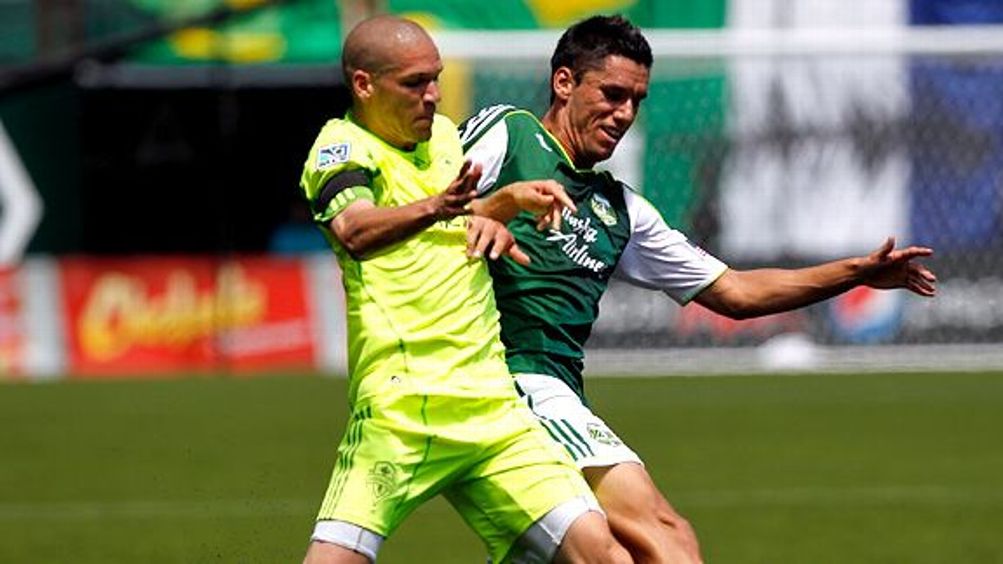 I was on my way to the game, standing on line in a convenience store, waiting to be rung up. The man on line in front of me was delivering a monologue, somewhat directed at the cashier but really to anyone within earshot, about reproductive rights and health education in various Third World countries. In New York, this guy would have been told to go reproduce with himself and get out of line. What happened here? As the man finished his speech the cashier nodded thoughtfully and said, “Man, I’ve got a documentary you have got to see.”

Yeah, I was in Portland.

And that is going to be the last joke I make about the city’s politics, fashions, food, or proclivity for fixed gear bikes. Let he who does not live within walking distance from several restaurants serving bacon-wrapped trout toss the first stone at PDX’s hipster/hippie atmosphere. I am not he.

It was Sunday, July 10, and I was headed to JELD-WEN Field downtown, the site of the second, regular-season meeting between the Portland Timbers and the Seattle Sounders. For MLS, Portland and Seattle, with their passionate, committed, knowledgeable fan bases, their gorgeous stadia, were two crown jewels, examples that the league’s aggressive expansion (four three teams in two seasons) works when it’s targeted towards soccer-savvy consumers.

Even though the Timbers and Sounders were relatively new to the league, it was a matchup with a long, pre-MLS history, and it had already attained status as one of MLS’ marquee rivalries, much needed in a league desperate for such storylines.

The history between the Timbers and Sounders goes back to the NASL days, in the late 1970’s and early 80’s, lasted through both teams’ time in the USL, has seen some dramatic U.S. Open Cup ties and, even when Seattle was in MLS and Portland was still in the USL, featured some well-attended, preseason not-so-friendlies.

Whatever city-versus-city animosity there is seems to basically revolve around the idea of Seattle as Socs and Portland as Greasers. Or maybe Seattle is full of suits and Portland is full of rebels. Rivalries are always the same song, be they in the Pacific Northwest or the Northeast Corridor or Ohio or West Texas. Different lyrics, same melody.

In the stands, this rivalry was manifested the way it often is at soccer matches: through chants and songs. The Portland fans sang songs about the greatness of their city and chided Sounders forward Fredy Montero for the sexual assault allegations he faced a few years ago. In response, Sounders fans repped for their players (lots of chants about goalkeeper Kasey Keller) and, unless I was hearing it wrong, chanted an anthem disparaging Portland’s quality of public transportation. The stands were alive with the sound of music.

Rivalries can’t be sustained merely by the emotions of the two teams’ fans. There needs to be something on the field that mirrors what is going on in the stands. The Sounders and Timbers are both fledgling MLS franchises, but the players and managers seem to have caught on to this idea. Earlier in the season Timbers manager John Spencer and Sounders boss Sigi Schmid engaged in a little war of words, with Schmid’s critiquing the overly defensive style of play Spencer had produced and Spencer, in turn, offering to give the Sounders “plenty of tissues” next time they played so they could “dry their eyes.”

Then you have Sounders forward Roger Levesque. His goal celebration in a 2009 U.S. Open Cup game, which involved a Sounders teammate chopping him down like he was a tree (“timmmmmberrrrr!”), has turned him into a pantomime villain in Rose City.

Earlier this season, in a rain-soaked Seattle, the two sides played to a taut 1-1 draw. Since then, Portland had gone downhill, losing five of its past six matches. In the meantime, Seattle had climbed up the Western Conference standings, undefeated in its past seven, sitting third in the conference and making it to the quarterfinals of the U.S. Open Cup.

For weeks, the two teams’ supporters had been posting on forums, commenting in blogs, planning their trips. This match couldn’t do a whole lot to change how fans felt about their team’s season, but the outcome could go a long way towards determining how they felt about their team.

There are lots of reasons why I think Portland has taken to football. For one, there’s little to distract local sports fans. The MLS season heats up right around the time news hits that Greg Oden is beginning his annual, offseason rehab on his knees and a little before the Oregon Ducks begin their college football season in earnest. It fills a void.

The other reason is this: Portland is obviously a progressive and passionate city. And it has taken to the idea of replicating the European football experience with gusto.

First you notice, in terms of infrastructure, how well the whole thing is set up. The stadium is situated downtown. To get to it, you can take the bus, light rail or, yes, ride your bike. I walked. It was a gorgeous, crystalline day in the notoriously rainy Pacific Northwest, and all around groups of people were draped in scarves and rocking all kinds of Timbers gear.

When you get inside JELD-WEN, you are treated to a honest-to-goodness, soccer-first field.1 The Timber Army, Portland’s famously rowdy supporters, sit in the north end, singing their hearts out — The Sex Pistols’ “Anarchy In The U.K.,” with “I am an Oregonian!” substituting for “I am an Anti-Christ!” — from an hour before the match to an hour after the final whistle. The east side of the stadium is low, allowing a view to city’s attractive skyline. The food is good, there are families everywhere, with kids giddily pointing and screaming at the Timbers mascot, Timber Joey, who lets off barbaric, trunk-cutting yawps from his chainsaw.

The match, beginning at 1 p.m. PST, came on the heels of the dramatic United States women’s national team victory over Brazil in the Women’s World Cup. So maybe I was feeling halfway hopeful, but I couldn’t help but get a little choked up at Kyra Smith’s rendition of the national anthem. It didn’t hurt that several thousand fans, in full voice, sang along with her and waved their scarves at the US flag at the line breaks in the song. And, of course there were the fireworks. And, upon completion of the anthem, the Timber Army unveiled a staggering tifo2 that read “King Of Clubs.”

Hair on back of the neck appropriately standing up, it was time to see if the on-field action could match the pageantry of the pregame pomp and circumstance.

This game opened up, as derby’s tend to do, tensely. Portland dropped back, playing 10 behind the ball, while the Sounders, dressed in an electric-neon-green away kit, not unlike the one Barcelona sometimes uses, kept most of the possession.

The first half was split pretty evenly into two acts (neither of which was particularly interesting). In the first, Seattle played some nice possession football, with Montero and Argentine creative midfielder Mauro Rosales looking for holes in the Portland defense. Then, towards the break, the worm turned for Portland, with the Timbers stacking up a few set pieces, threatening the Seattle goal.

If you want to take the pulse of a crowd, go to the bathroom at halftime. At JELD-WEN, aside from the critique of the amount of urinals (“typical Portland, only six toilets”), there was a general chatter about the game needing to open up, how Timbers manager John Spencer needed to abandon his conservative tactics and, in front of this crowd, with a national television audience, go for the three points. At 0-0, the game was crying out for a goal.

From the men’s room to God’s ears. In the 46th minute, Timbers forward Kalif Alhassan sent in a low cross, right in front of goal, for his strike partner, Jorge Perlazza. The ball was bundled past Sounders keeper Kasey Keller by his own defender, Jeff Parke: 1-0, Timbers.

After being tackled from behind by Timbers midfielder James Marcelin, Montero equalized with a curling free kick. Montero removed his jersey and waved it like a matador for the frenzied Sounders away support.

These two players — Marcelin and Montero — in different ways, dominated, as they led their teams through an emotional roller coaster of a second half. You could practically hear fans washing down Klonopin with their fair trade coffee and micro brews.3

The young Haitian, Marcelin, directed traffic, displayed a deft touch, tackled hard, and kept the ball well. Whether crunching into Montero or pulling off a midfield pirouette with the ball, he looked like a less polished version of Patrick Viera, patrolling the center of the park. Everything he did was economic and subtle, but practically everything he did was right.

Under his conduction, the Timbers played orchestral football, moving as one. Their work paid off when midfielder Diego Chara found a Perlazza cutting down the flank, who fired in a deflected shot, sending the Timbers back into the lead.

Now it was Montero’s turn again. In the 74th, the Sounders put together a team goal of their own, with sub Lamar Neagle crossing for Rosales inside the box who, with one touch, dumped it off to Montero who speared the ball through, equalizing for the Sounders.

While Portland was out looking for its winning goal, Lamar Neagle snuck in the back door. Taking advantage of a high Portland defensive line, the Tacoma native received a ball over the top and was taken down, studs flying, by a recovering Timbers defender, Eric Brunner.

A hobbled Montero passed off penalty-taking duties to Osvaldo Alonso, who buried it from the spot: 3-2, Sounders.

As the crowd meandered out of the JELD-WEN there were no hysterics. Despite the pregame pleas of the Timbers Army to segregate themselves from Sounders fans, most people, whether they were wearing Seattle or Portland colors, were in a pretty sporting mood.

Maybe they realized that you can wear scarves and sing songs and warn one another about not interacting with the opposition support, lest there be some kind of throw-down in front of Powell’s. But for football to become football in America what you really need, most of all, is more games like that, more players like Montero and Marcelin, and more 3-2 thrillers in which one set of fans get their hearts broken. Because when you see something like that, even if you’re a Timbers fan, your heart might hurt. But you can’t really say you lost.