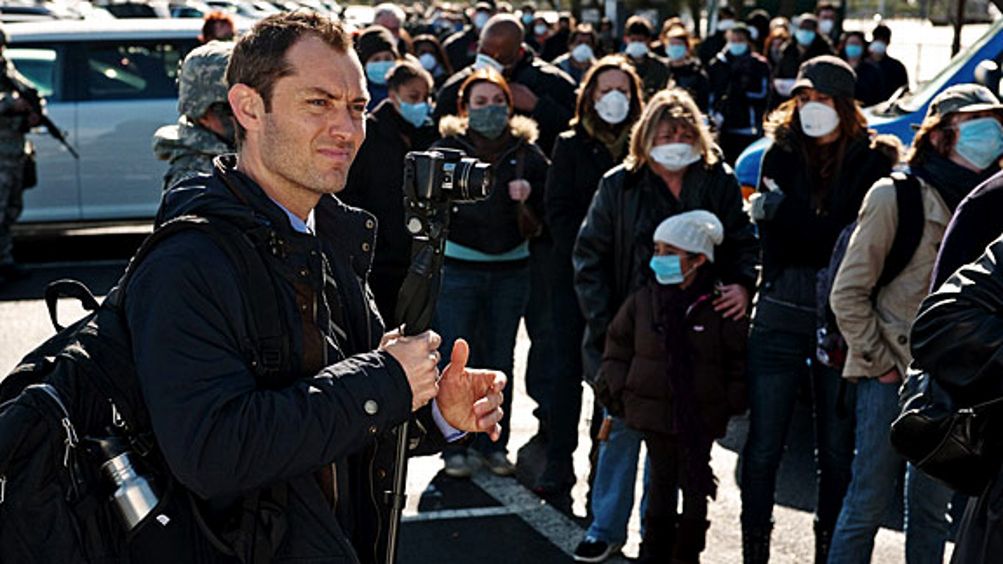 Doorknobs, a communal nut dish, a stranger’s iPhone, a simple handshake, anything from Asia: These are the things you might scrutinize anew after watching Steven Soderbergh’s Contagion. The film stars MEV-1, a lethal and highly contagious virus that spreads through indirect contact, and it features a motley assortment of people around the world who perish from or are vexed by it. But it is more than a story of infectious disease. As with Soderbergh’s best films, Contagion is about the unlikely nodes that unite strangers, and we witness these many fraught-yet-mundane interactions as if we were spying on them through some omniscient surveillance camera. Contagion is about a virus, but it is also about virality, memes, and how information, paranoia, or both spread in ways that defy the ultimate, natural logic of proteins, cells, and pathological infection.

Any decent disaster movie is really an index of social fears, and the history of such movies provides periodic glimpses into previous generations’ nightmares. Early cinema brought us dramatizations of the Titanic’s sinking and runaway fires erasing whole sectors of city maps, revealing anxieties about the ambitious structures imagined by engineers of the time. In the shadow of World War II, it was man-made monsters and mutants who testified to science gone wild, while zombie movies reminded audiences communing in the dark to retain their status as individuals. The early days of commercial aviation in the 1950s introduced plotlines about disgruntled aerospace engineers or derelict pilots.

But the history of disaster films is also a history of technology — of what becomes possible as the art and scale of moviemaking evolves and expands. It’s no coincidence that the disaster film reached its apex in the blockbusting 1970s: What better way to show off what a maturing industry was suddenly capable of than with city-leveling earthquakes (Earthquake), ship-wrecking tsunamis (The Poseidon Adventure), towers on fire (The Towering Inferno), booby-trapped amusement parks (Rollercoaster), and meticulously scripted air-travel-related drama (Airport).

The epidemic movie is a special category of disaster movie, because its fears are diffuse, if not completely invisible. It is not the fear of a radioactive beast heading to your city; it is the possibility that a sneeze on the subway or white powder on an envelope might doom us all. Epidemic movies explore the edge of reason and fix on society’s breakdown (The Andromeda Strain, Blindness) or they float the possibility of rebooting human civilization altogether (Blade, Children of Men, I Am Legend, and its predecessor, Omega Man). Others suggest the possibility that some combination of science and the military have gone too far (Outbreak, 12 Monkeys, The Happening, 28 Days Later), and nearly all feature monkeys. As such, the epidemic movie usually calls for an altogether different form of heroism. The brawny, wisecracking men will not drill a hole into the asteroid; there are no haunted ex-pilots among the passengers tasked to land the plane after the entire crew has been poisoned. Instead, the planet’s fate rests in the uncalloused hands of the nerds.

Or, in the case of Contagion: nerds embedded in bureaucracy. If the epidemic movie explores issues of order and containment in settings where anyone might be a carrier, then Contagion is unusual in the way it scrutinizes logistics. The film’s fictional virus originates somewhere in Asia — “Hong Kong’s a long way,” a character remarks in the film’s opening minutes, when the audience already knows that it is not — and enters the United States via a (it must be said: unlikable) businesswoman named Beth Emhoff (Gwyneth Paltrow), who convulses to death in front of her husband; in Japan, a man suffers a similarly violent death on a bus, which is captured by a camera phone and beamed around the world. Contagion smartly frontloads its gore — medical examiners slice Emhoff’s head open and peel her scalp back, and they instantly recognize that they are out of their league. Meanwhile, other victims froth away across the globe. Once these deaths are mapped and plotted, and the local epidemics cohere as pandemic, it is up to the World Health Organization, the Center for Disease Control, and university researchers to figure out what to do.

The possibility of MEV-1 is faintly disturbing, more so if you read The Hot Zone at an impressionable age. But one is most mesmerized by Contagion‘s exploration of the bureaucracy of disease management and dying — of hospital registration rooms flooded with requests, orderly lines for rations that turn instantly anarchic, funeral homes refusing to take claim of infected corpses. These are the collateral effects of pandemic. As a team of researchers happens upon a cure, they massage their temples to the work that remains: Testing and then manufacturing the vaccine will take at least three months, and what will the death toll be by then? Already, nurses have refused to come to work, for there is no existing protocol in their work manuals for dealing with something like MEV-1.

“They say the French and Americans have the cure,” a Chinese assistant to Leonora Orantes (Marion Cotillard), an epidemiologist at the World Health Organization, whispers in a faintly accusatory tone. “Who says?” she asks perfunctorily. “The Internet.”

Disaster films like Contagion allow us to imagine situations when we might overcome prejudice and unite force and intellect across borders. They are about convergence and the recognition of common fate, when the world’s representatives gather on adjacent flat-screen monitors and agree to pool their resources. But for those down below, waiting in line for rations or prying cans of food out of their neighbors’ hands, this is of little solace. Against CDC directives and press conferences there is gossip, and against bureaucracy, then, there is the dignity of the Internet, represented here by a charismatic, muckraking blogger named Alan Krumwiede (Jude Law). He refuses the official version of events, warning his readers — a population which grows even faster than the virus — to refuse vaccination and turn instead toward a mysterious homeopathic remedy called Forsythia.

And so there are two viruses to Contagion: MEV-1 and Krumwiede’s rapidly consolidating narrative about MEV-1, Forsythia and all the authorities hope to keep from us. One might be contained and hopefully neutralized; the other recalls the all-at-once wildfires of WikiLeaks. “I think what Alan Krumwiede is spreading is far more dangerous [than MEV-1],” Dr. Ellis Cheever (Laurence Fishburne), head of the CDC, explains during a television interview. Krumwiede defends himself swiftly, and then points out a Facebook post that compromises Cheever’s credibility. It — like the video of the man shuddering to death in Japan and Krumwiede’s blog posts about Forsythia — has gone viral.

The history of disease is the history of human encounter — of soldiers from around the world sharing close quarters, of ships manned by the global underclass and, more recently, of affordable and efficient airline travel, the invention of the shipping container, and the thirst for cheap goods. Disease is but one point at which we all connect. There is a final, predictable irony to MEV-1’s origins, one that underscores the invisible and often unexamined ways we might depend on the faith and labor of strangers. Much like Soderbergh’s 2000 meditation on the war on drugs, Traffic, this film is about a totality that no single person will ever be able to grasp, and yet one in which we all participate.

I had never been to a movie that prompted so much anxious murmuring. In the opening moments, as Soderbergh’s camera lingered a split-second too long on a doorknob or the inside of a public bus, it seemed there could be no worse place to be in times of epidemic than inside a movie theater full of gasping, whispering, wheezing strangers. As the credits rolled and the house lights spurred to life, we were reminded that we were safe in the present. A wiseass coughed loudly and deliberately, over and over, until people filing down the exit rows got the joke and laughed in his general direction. I washed my hands vigorously but feared it would not protect me from an epidemic unique to New York City movie theaters, one that we already know about: bedbugs.

Previously from Hua Hsu:
When They Were Kings: Paid in Full to Tha Carter IV
Never Been in a Riot
Watch the Throne: Let Them Eat Cake