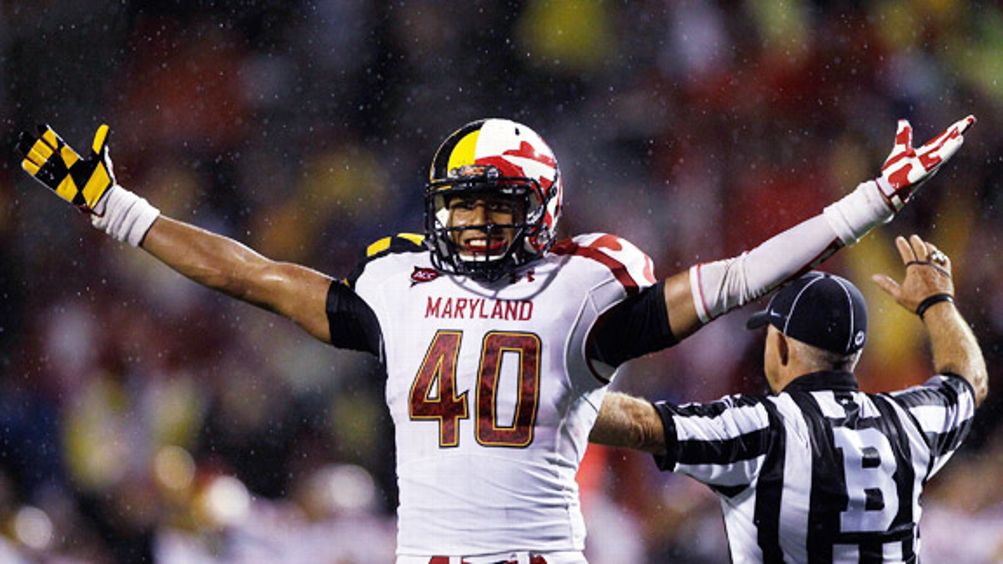 Under Armour hasn’t sent Maryland onto the field uniformed in raw meat — but will we bat an eyelash when the day comes? Football has caught up to Lady Gaga, or Lady Gaga has caught up to football. Why wear one uniform when you can wear them all? What Maryland wore to play West Virginia on Saturday afternoon explained what things might be like if Kyle Busch drove Nicki Minaj across the finish line.

The team came to the field in black, red, and yellow, with a touch of gray. The helmets had military matte finish, but with the state flag’s checked TV-pattern stripe of black and yellow, and red and white racing down the middle. Otherwise, they bore no logo, which would have meant “all business” had an Atari game not been gnawing at the legs of the too-short, hip-to-knee tights. Also: One more gram of flare might have violated some NCAA rule about accents.

As it was, some of the Terrapins had wrapped their upper arms in yellow tape. If you caught this accessorization from behind, the tape lined up with and matched the yellow stripe on the lower-back padding. From the front, it was a different story, since all it did was pick up and complement the same color on the opposing team. (Once in a while, life resembles football insofar as white is a gamble. West Virginia usually wins.) Maryland also wore red Under Armour belts that, by halftime, a few players seemed ready to use to spank the designer. There was enough extra fabric for a second waist. The smart players didn’t bother to tuck (or retuck) their shirts into their belts, which saved them from looking like one of the homemade superheroes in Kick-Ass, especially once the shoulder pads began to pop out from beneath the shirt and couldn’t be properly restored. Meanwhile, certain linebackers, in all that black spandex, just broke my heart. Can you still do your best tackling when you’re a headband away from a Zoolander costume party?

Believe it or not, this was an improvement over Maryland’s previous notice-me ensemble. Their September 5 game against Miami introduced the “Pride” uniform, a white-on-white affair, now notorious for the way it deconstructed the flag so that the black and yellow occupied the right side of the helmet while the red and white took up the left. That idea extended to the shoes, which looked like someone had stepped in a bowl of melted graffiti. The whole thing looked like a Bring It On bomb had gone off all over the sewing floor — and I, for one, was left looking for pom-poms. Saturday’s getup had a vision guiding it: How can we look more like CGI extras in a Transformers movie?

Apparently, these are variations on what the players wore in EA SPORTS’ NCAA Football 12. And when the photos of this season’s pieces were leaked to the media — yes, pieces; yes, leaked — more than one sportswriter was excited about the 16 “combinations.” That’s not as impressive as Oregon, whose Nike uniforms can be mixed and matched 80 different ways. Still, even for Maryland, it’s a whole lot of not wearing the same thing twice. This should be depressing. In the past decade the philosophy of outfitting college athletes has become virtually indistinguishable from the philosophy of a Real Housewife. (Somewhere, Title IX just rolled her eyes.)

What makes the Maryland uniforms newsworthy is that this doesn’t just appear to be the case of a popular upstart company competing with a megacorporation. It’s that Maryland is a football program that’s thinking like a pop star. No one outside of College Park will be talking about the score (the game turned into a late nail-biter: 37-31, WVU). They’ll be searching to see what Maryland wore. For the moment, this program has made us want to know what the team will have on next week. These uniforms don’t want to win football games. They want tweets. That’s not disreputable. It does feel new. Teams have always changed what they wear (home uniforms, away uniforms, throwback jerseys). We now just live in an age in which they’re far likelier to hold a press conference to announce it.

For viewers at home, an emphasis on apparel is also welcome. An afternoon spent roaming FiOS or DIRECTV for games and updates stirred some appreciation for what set Maryland’s clothes apart from the rest of the ACC and, maybe, all of college football: They’re camera-ready, and someone at Under Armour seems to know that. These are colors that simultaneously pop and sink in. They absorb light. They also absorb gawking. On a television — particularly, one in a bar walled with flat-screens — your eye wanders toward the Terps. They don’t look like any other NCAA team or like an NFL franchise. You could argue that, with all the costume changes, they don’t look like themselves, either. But it’s fun watching a team combine playing football and playing with identity. On the field, I’d rather wear just about any other school’s uniform, but Maryland’s are the ones I most want to watch.

Filed Under: College Sports, Music, Rap, The U