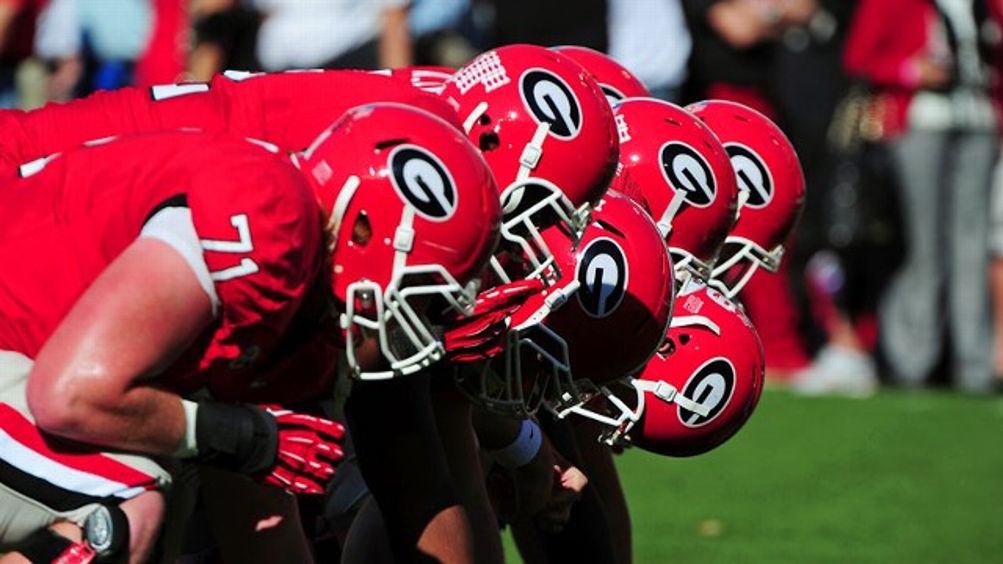 These past few weeks have made me thankful that college football’s eventual playoff will include only four teams. Eight sounds ideal, but with more teams in the playoff, we’d have fewer seared-in-the-memory upsets to enjoy. If Kansas State were still in the playoff picture, for example, then their loss to Baylor would’ve been just a good game rather than the epic shakeup it was. Even the four-game playoff would have made Oregon’s loss to Stanford meaningless, and that was the best game of the season thus far. I lobbied and lobbied for the playoff, but now it’s making me nervous. College football has the best regular season of any sport, and I guess in my mellowing 30s I can see the wisdom in preserving that. It’s a circumstance unique to college football that if you lose one game, you can’t win the whole thing without help. And the strange bedfellows that circumstance creates — Notre Dame fans rooting like crazy for Stanford, Alabama fans on their knees in gratitude to the Baylor Bears, Florida fans pulling for a USC backup quarterback they’ve never heard of — it seems risky to mess with that stuff.

Personally, I remember the games in which other teams opened the door to a Florida championship every bit as fondly as the championship games themselves. In 1996, my Gators needed Texas to upset Nebraska, and James Brown rolled out on fourth down and hit a wide-open tight end, sending my cheap Gainesville apartment into hysteria. In 2006, Florida needed UCLA — entering the game at .500 in conference play and having lost 66-19 to USC the previous year — to pull out a 13-9 nail-biter against one of Pete Carroll’s loaded squads. When the final whistle sounded, a Gator bar in Alexandria, Virginia, exploded in cheers.

A playoff is needed, but I can’t help but feel like four is the right number after all. That makes it all but impossible for an undefeated team from a major conference to be left out, while also keeping the last couple weeks of the regular season as topsy-turvy as possible. Just personal opinion of course, but I wouldn’t trade the season-crushing, pundit-debunking, weakness-exposing upsets of top-ranked teams for the lesser upsets that would determine the eighth team in the playoff. And anyway, the rest of the country is sick of the SEC. Do you all really want an Elite Eight playoff that would routinely include four or five SEC teams?

Georgia vs. Alabama — It’s a relief there will be an SEC team in the BCS Championship. I have never been an advocate of two teams from the same conference playing each other for the national title, and last year I argued that Oklahoma State should’ve been included over Alabama. This year, if a second SEC team had made the game it would have been my Gators, but I still don’t think that would’ve been right. The other side of the coin is that it would also be wrong to have no SEC team in the game.

The SEC has famously won six championships in a row, and no team from the conference — other than LSU, which lost to fellow SEC squad Alabama — has ever lost a BCS Championship they’ve been invited to. When some future generation looks back at the record books, ignorant of context, all national championships will appear equally valid. But for us, the fans here now, to crown a champion that never had to beat an SEC team would be a hollow exercise. As a Florida guy, I’ve watched my team beat four top-tier teams — two of them on the road — so to watch a national title game between teams that played lesser schedules, a game with no representative from the toughest conference in the land, would seem silly.1 And Notre Dame fans want to play an SEC team. The folks in South Bend want Alabama or Georgia. They want to end this SEC streak, not filibuster it. They want their championship to be legitimate.

So, the game. The way Georgia has been playing in recent weeks, it seems we’re in store for a barn burner. Georgia has talent equal to or greater than Alabama’s. Both teams have an excellent quarterback. Both have dangerous running backs. Both have one game-breaking receiver and a couple capable others. On defense, Georgia has a veteran squad full of NFL-worthy talent: Jarvis Jones to pressure the quarterback; the two 350-pounders, John Jenkins and Kwame Geathers, to plug inside running lanes; a secondary chock-full of seniors. Based on these two teams’ depth charts, not considering all we know about head coaches Nick Saban or Mark Richt, the Bulldogs would appear to have an edge. But we do know quite a bit about Saban and Richt, so we know Alabama will be mentally prepared, and we only hope Georgia will be.

This is a big, big, big game for Richt. It’s a legacy game. If Georgia loses, it will cement the Bulldogs into what fans in the South believe them to be — national title also-rans who’ve benefited these past two years from soft conference schedules, a team that always has talent but never enough resolve. But if Georgia wins, this game will turn the conventional wisdom on its head and show that Richt can coach as well as anyone. The Dawgs need to win now or they won’t be back in the hunt for a quite a while. Much of Richt’s defense will be playing for money next year. Florida is back already. Spurrier and South Carolina have a top-notch passer in quarterback Dylan Thompson. If the Bulldogs want to revise their identity, this is their chance.

Note: Did you see where Nick Saban was complaining about the fact that the loser of the SEC championship game won’t get to play in a BCS game? That’s a psychological ploy, right? As a former defensive back, Saban has been trained to have a short memory, but he can’t actually have forgotten what happened to his Alabama team just a year ago. Could he? He can’t actually be offended that the Florida Gators are going to sit at home and watch TV this Saturday and be rewarded with a Sugar Bowl berth, when just last year his team sat around and watched LSU pummel Georgia and then got an invite to the BCS Championship Game. Just some kind of coach’s mind trick to motivate his team, right?

Wisconsin vs. Nebraska — And then you don’t have to watch any more Big Ten. I promise. It’ll stop. This is one of those instances when the conference championship ring is more valuable than what it symbolizes. If the winners weren’t going to receive some gaudy bling they can pawn if the job market stays tough, I’d say cancel the game. We all know that the Big Ten champions are in Columbus, Ohio. We all know that whatever disappointment Wisconsin or Nebraska fans have to deal with over losing this game, it won’t compare to the sour taste in the mouths of Buckeye fans who have watched their team go undefeated and now get to watch the BCS Championship Game from afar. Montee Ball has already broken his touchdown record, right? Bo Pelini has Nebraska operating at their full scrappy potential. We’ve almost run out of college football, so it would be foolhardy to skip watching this. But then we can put this debacle to rest. You have my word.

This is a rematch. Judging by their lack of zeal last Saturday, either UCLA were suffering a hangover from their victory over the crosstown Trojans, or else they realized they’d be in the conference title game no matter what, and that if they beat Stanford they’d wind up playing Oregon. I guess Coach Mora’s pregame speech was something like: “OK, guys, this is for none of the marbles. If you go out there and give it your all, you can decrease your chances of going to the Rose Bowl. When Stanford walk off this field, they’re going to remember the UCLA Bruins, but if they don’t that’s OK because they’ll see us again in less than a week.”

This is an attractive game, however, now that it means something. There’s no running back in the country more fun to watch than UCLA’s Johnathan Franklin and no running back more underrated than Stanford’s Stepfan Taylor. Brett Hundley, the Bruins’ quarterback, and Kevin Hogan, Stanford’s quarterback, are growing into two of the nation’s top signal callers. A couple great tight ends, too, in Stanford’s Zach Ertz and UCLA’s Joseph Fauria. And a pair of excellent coaches — Jim Mora, whose charge is to supplant USC in the Pac-12 South, and David Shaw, whose mission is to make the Ducks stumble in the North. Missions accomplished.

Florida State vs. Georgia Tech — How exactly am I to avoid SEC arrogance at this juncture? What other tack is available? Florida State fans, before last weekend, were complaining about their BCS ranking because some two-loss teams were ahead of them. The computers didn’t like them and, as is often the case, the computers were right. The computers don’t care that you have NFL players on your defense or that your quarterback is a senior. The computers only care whom you’ve played and what happened. So what happened last weekend was that, in what is becoming classic Will Muschamp style, the Florida Gators wore down the Seminoles and then ran away with a win in the fourth quarter. What happened was that the Georgia Bulldogs ratified the notion we all had that the Yellow Jackets are the junior varsity of the Peach State. What happened was that South Carolina marched into Death Valley East — which maybe should be renamed Sometimes Unpleasant Depending on Who You Are Valley — and won their fourth straight against Clemson coach Dabo Swinney.2 For good measure, SEC nerdery Vanderbilt eviscerated Wake Forest. Georgia Tech, at .500, is playing in the ACC title game because Miami self-imposed a postseason ban again, hoping to water down whatever sanctions are forthcoming from the NCAA. Even if Miami were playing in this championship, the game wouldn’t be much sexier. Miami is 7-5.

Notre Dame vs. … — Oh yeah, they don’t have a conference championship game. The Domers are in. Kansas State ran into an offensive buzz saw down in the Lone Star State and Oregon ran into a legitimate defense. Then the most important play in Notre Dame’s season: Matt Barkley got sacked by UCLA linebacker Anthony Barr and did not get up. The Irish soaked up a little sun in L.A., and now they’re back in front of the tube, rooting for those Georgia Bulldogs. Yes, it’s OK. You can admit you’re scared of Saban. We’re all scared of him. Georgia may have more talent, but all in all, you’d rather face the Leg-Humpers down in Miami than have to face Saban when he’s had plenty of time to figure out how to stop your already fairly stoppable offense.