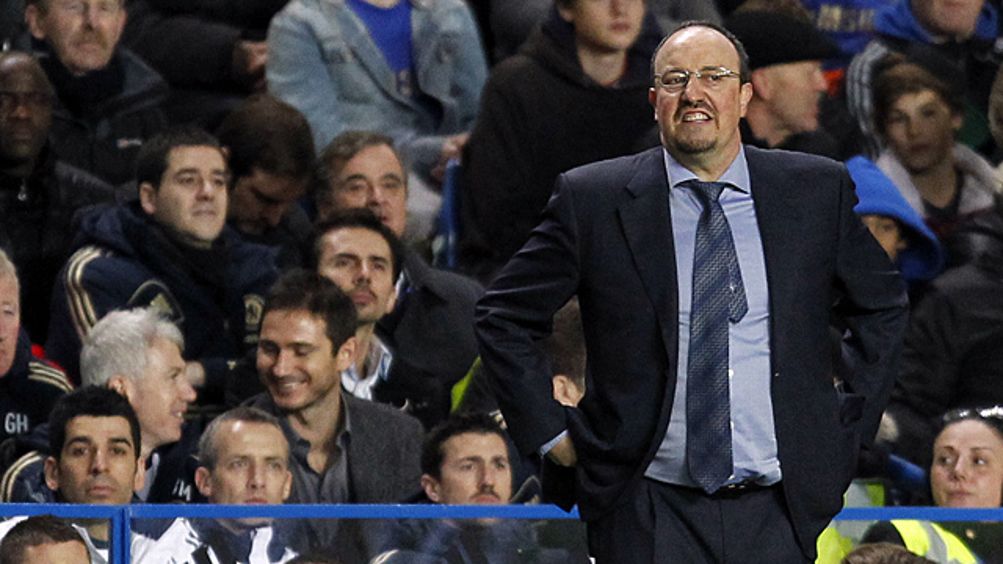 So Rafa Benitez, who managed Liverpool for six years and won a Champions League trophy and fell out with the club’s despised billionaire owners and got his solemn hamster’s face silkscreened onto a lot of Che-type revolutionary flags and somehow wound up becoming a pudgy and wonkish-looking symbol of survival and defiance against the ravages of unchecked sports capitalism — Rafa Benitez is now managing Chelsea, the club that did more than any other to transform the relationship between soccer and money, the O.G. of modern capitalism in European sports.

As “what could possibly go wrong” scenarios go, this one’s a doozy. This is not Lindsay Lohan getting into a car with Charlie Sheen; it’s Lindsay Lohan getting into a car with Michel Houellebecq. Roman Abramovich rules Chelsea as an absolute despot because he’s one of the 70 richest humans on earth; Rafa Benitez once spawned a catchphrase (“In Rafa We Trust”) that implicitly positioned him as a radical alternative to the entire global monetary system. Roman Abramovich fires managers by the crateload — he’s burned through eight since 2004 — while Rafa Benitez has messily and publicly feuded with every owner he’s ever worked for. You can purchase your popcorn with MasterCard or you can purchase your popcorn with blood.

To be (briefly, if you insist) fair here, at least some of the conflict between Roman’s and Rafa’s ways of doing business is iconographic rather than ideological. That is, Rafa is not, in any action-supported sense, anti-money. He took a £6 million payout from Tom Hicks and George Gillett after losing his war for the soul of Anfield. His brand affiliation with aesthetically leftist and insurrectionist imagery has to do with a lot of factors he pretty much just stumbled into — the fact that Liverpool fans seized on him as a symbol during their high-stakes hate campaign against a pair of American tycoons, the fact that Liverpool’s club identity already skewed leftward thanks to, among other things,1 Bill Shankly’s lifelong commitment to socialism. Rafa may be vaguely Mao-shaped, but his own Little Red Book would be about marking schemes, not class struggle.

If anything, Rafa’s endless campaigns against management have been about wanting more money, and more control over it. That humiliating, six-months-in sacking he endured at Inter in 2010? That came because he demanded transfer investment, not because he agitated for the club to get back to its communitarian roots (cue sound of man in fur coat chortling around a cigar). As you’ve perhaps heard, transfer investment hasn’t typically been a problem for Chelsea. Maybe we’re good here.

Iconography matters, though. Rafa was booed passionately and at length during his first two matches as Chelsea manager.2 (Both 0-0 draws, for whatever that’s worth.) Some of the fan hostility was a result of the business-casual trolling he’d directed at Chelsea supporters during his time at Liverpool, and some of it was a result of the fact that Liverpool played Chelsea in about 350 consecutive Champions League semifinals during the 2000s, most of which landed on the high right side of the nastiness/controversy graph. But it’s not crazy to suggest that some of the hostility to the appointment stems from the fact that Rafa was so memorably associated not just with Liverpool but with Liverpool’s balaclava-protest-march-somewhere-beyond-the-barricade sub-facet, the whole vibration of which is intrinsically hostile to Chelsea’s very existence.

For comparison’s sake: Imagine if the rumors had been true and Pep Guardiola had been coaxed to Stamford Bridge. (It could still happen.) Barcelona has also had some recent European tussles with Chelsea, and also stands (at least superficially) for something morally opposed to the billionaire’s-whim model of soccer ownership. I don’t think Guardiola would have been booed in the same way, simply because he doesn’t have a history in the Premier League. But it would have been kind of uncomfortable to see him there, right? You would have felt a little tug of not-rightness? Compared to, say, Harry Redknapp showing up on the sideline in a £50,000 watch, it would have felt like weather fronts colliding, two different visions of what soccer is supposed to be trying to coexist in the same space. That’s iconography. And it’s the same with Rafa, only — and this is the basic comedy of Rafa in 2012 — he never really meant to stand for anything.

It’s also the case, of course, that Rafa is famously meticulous and driven and prone to devising 400-page chart-riddled game plans for early-round FA Cup competition. Which tends to mean that his conflicts with bosses also spill over into team composition and transfer policy, the whole fraught question of control over personnel. It was partly his inability to work with Valencia’s director of football that led to his departure from the Mestalla in 2004, and the same theme kept rolling in Liverpool and Milan. And when he doesn’t get the control he wants, he generally starts dropping bombs in press conferences. This won’t be a problem at Stamford Bridge, however, because Roman Abramovich is pretty Zen about who calls the shots with his team and also seems very laid-back about being criticized by his employees in public. “Hey,” he’s been known to say, “the manager knows best!” And also down is sideways and Green Lantern is an unstoppable film franchise and Moby Dick would be happy to live in your aquarium; why don’t you dive in and ask him?

It is at least somewhat possible that both Rafa and Roman know all this and don’t see it as a problem. I mean, Abramovich is a week removed from sacking Roberto Di Matteo, a beloved former Chelsea player who managed the club for eight months and won both the FA Cup and the Champions League. You would have to be a self-deluding megalomaniac to see coaching Chelsea as anything other than a path to a short-term payoff. And Rafa has enacted the same bighorn-sheep-in-spring routine at every club he’s managed; you would have to be a self-deluding megalomaniac to hire him thinking he’d fall in line and do whatever you asked. So, yeah. Good thing neither of these guys is a megalomaniac, right? We could be looking at a real powder keg here! 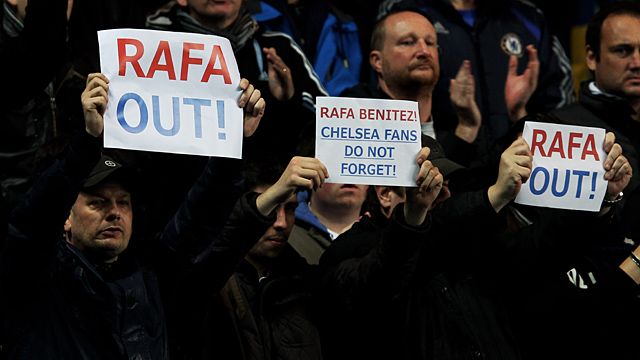 But there’s one additional wrinkle in this relationship — one that might give it the slenderest conceivable chance of working. And that is that both these men still live in the shadow of Jose Mourinho. Abramovich has brought several more trophies to Chelsea since kneecapping Mourinho (“by mutual consent”) in 2007. But he’s never replaced the You-Know-What One in the affections of Chelsea fans, nor have any of his numerous proxies (GrantScolariWilkinsHiddinkAncelottiAVBRDM). When you think of Chelsea in its modern or “successful” incarnation, you still think of Mourinho more than anyone else, even though he hasn’t coached there for five years and counting. For an owner who’s basically rigged up a giant cartoon conveyor belt from his own private gold mine to the club, that must gall.

As for Rafa, he played Mourinho in seven Premier League matches and lost five of them. He never finished ahead of Mourinho in the league table. He did stop Mourinho’s team from reaching the Champions League final twice, but he also spectacularly self-gonged as Jose’s follow-up act at Inter: Mourinho won the treble in 2009-10 and left for Real Madrid, at which point Rafa took over the same squad and managed to bungle3 his way out of a job in less than half a season. Now he’s taking over another club that’s still the spiritual property of his rival — who’s a member of his generation (three years younger, in fact), who’s won more, who’s been far more celebrated and sought-after, and who’s become the defining figure in European soccer that Rafa never quite managed to be. And you’re telling me he doesn’t want to win colossally with this team?

So who knows — if these two can somehow connect over waking up in the middle of the night with the word “special” ponging around the insides of their skulls, if they can find a common plane of reference and agree on advanced concepts like “Hey, what formation should we use?” and “Which players are we going to buy?” they might surprise us. Chelsea’s current lineup is probably not good enough to win the league this season, especially with Drogba’s attempt to come home from China foundering, but then January’s a whole new team, as they say around the Bridge. And so’s June. And anything could happen next season, if Rafa’s around that long. (Cue .wav of fur-coat man chortling again, obviously.)

I don’t know. If I were Alex Ferguson, and safely outside the blast radius, I don’t think I’d lose any sleep.