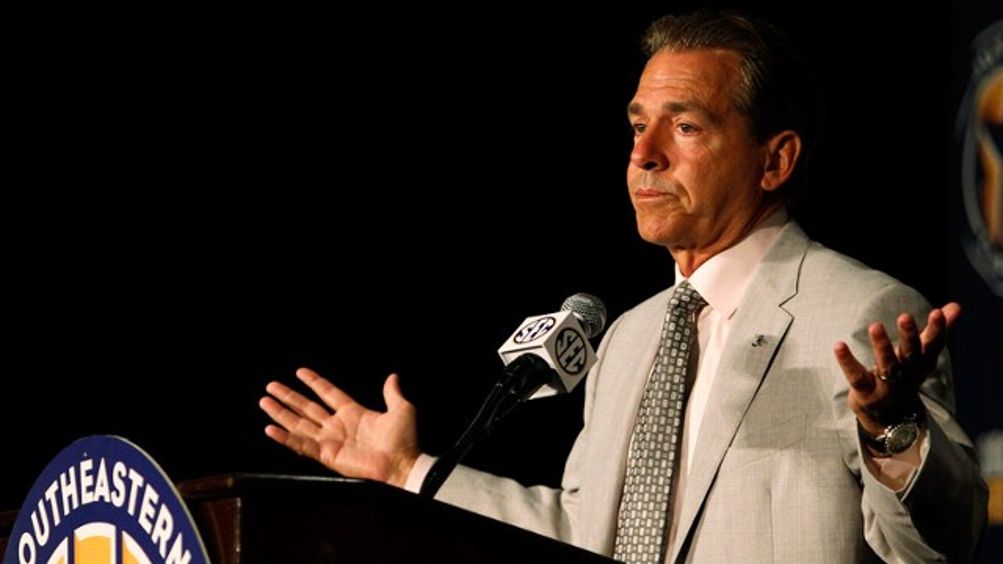 First came the homily, a stem-winding invocation of Shakespeare and Churchill and Muhammad Ali that emerged from the lips of a 71-year-old attorney who is arguably the most powerful human being in college football. “No one program, no one person, no matter how popular, no matter how successful, can be allowed to derail the soul of an institution,” said Mike Slive, the commissioner of the Southeastern Conference, and a few minutes later, I watched a dozen camera operators trip over their own feet in order to capture a 12-second shot of Steve Spurrier walking down a hallway.

Inside Ballroom C of the Wynfrey Hotel, a venerable lodging establishment attached to a shopping mall in suburban Birmingham, Alabama, Slive declared the state of his conference to be really unbelievably awesomely blissfully wonderful, and with that the platitude-a-palooza known as SEC football media days had officially begun. Over three days and just as many free lunches, 14 coaches and 42 football players took turns answering a litany of questions ranging from insightful to insipid, a great many of which appeared to have been scripted by Stephen Colbert himself: SEC: Great conference, or the greatest conference?

There was something awe-inspiring about the spectacle, about all these people gathered in rooms adorned with paintings of cherubs and angels and enchanted forests, while tacky chandeliers in the shape of CGI aliens shed light from above; about the endless supply of Golden Flake dill-pickle-flavored potato chips1 and Dr Pepper; about the table full of promotional brochures for Chick-fil-A and an all-new SEC tailgating cookbook; about the long tail of radio row downstairs, where “The Pressbox” and “The Game” and “The Deuce” and approximately 67 outposts of ESPN radio killed time by debating the vagaries of the Egg Bowl; about the handful of hyperobsessive fans in the lobby, contained to a bullpen area by green safety ropes near a sign that screamed NO AUTOGRAPHS; about the giant room of print hacks and two rooms stacked three-deep with TV cameras, not to mention the rooms occupied by various ESPN and SEC Network and CBS talent, hundreds upon hundreds of us live-tweeting inscrutable quotes (“I don’t expect the expectations to drop at all”) to the masses. It was all sunshine and bluster down here, a celebration of perhaps the last institution in America that seems to have transcended 21st-century decline.

And who can fault the SEC if it tends toward hubris these days? Six straight national championships in a part of the country where college football is inextricably tied to the region’s identity will do that. If that swagger has carried over from coaches to fans to even certain media members who cover them — I heard one talk-radio show host label the Big Ten Conference “holier than thou” — isn’t that to be expected? Hasn’t this little party been earned?

The occasional queries about whether head injuries might somehow render the sport obsolete, or about the subject of Slive’s opening salvo against despotic tyranny, Penn State coach Joe Paterno,2 were blandly deflected. So little news was broken that when a hungry sportswriter asked Missouri coach Gary Pinkel where he should eat when he travels to Columbia, the coach refused to answer. John L. Smith, the excitable fellow who took over at Arkansas after Bobby Petrino’s motorcycle mistress movie of the week, squawked something about “trying not to be overly stupid” and likened himself to a duck. Steve Spurrier made fun of Ole Miss, Kentucky coach Joker Phillips talked more about basketball than football, and LSU coach Les Miles literally opened his press conference by telling us about his summer vacation. All was in order, and all the angst and doubt plaguing college football didn’t seem to matter at all now that the summer was essentially over in the South.

It was all sunshine and bluster down here, a celebration of perhaps the last institution in America that seems to have transcended 21st-century decline.

That gap between the SEC and the rest of America became starkly clear on the first afternoon, when Missouri and Texas A&M, a pair of migrants from a flashy Midwestern outfit known as the Big 12, took their turns rotating from one room to the next. The prevailing wisdom, as Miles said, is that “there’s a little different breed of defense in this conference,”3 and that those adorable little up-tempo Trans-Am offenses favored by Missouri’s Gary Pinkel and A&M’s Kevin Sumlin will get eaten alive by the SEC, where the defensive ends all weigh 300 pounds and run a 4.4-second 40 and the linebackers have been served spread quarterbacks for breakfast since the ninth grade. There will, Miles said, be a learning curve.

“Sure, the SEC’s won the last six national championships, but not all 12 teams have won them,” replied a defiant Missouri wide receiver named T.J. Moe. “There’s one or two teams dominating everybody, and everyone else is kind of average. Well, not average … ”

And: “Smash-mouth football isn’t going to take us by surprise.”

And, when the subject of “SEC speed” arose: “I think every conference has a lot of speed. If you’re playing Division I football, you’re fast.”

This heresy was largely laughed off.4 Set him down in The Swamp in November, and he’d learn. But Moe was insistent, and pointed out that Missouri had the ninth-best rushing attack in college football last season.

“And yet,” said one incredulous reporter, “you’re still going to line up in the shotgun on first-and-goal from the 1-yard line?”

On Thursday morning, Nick Saban swept into the print media room, wearing a natty gray suit and a stare that could strike down a water buffalo. “You know how excited I am looking forward to this event,” he deadpanned, and then, according to my transcript, he managed something resembling a smile.

“We certainly appreciate what you do to promote college football and college athletics,” he told the assemblage, and downstairs in the lobby bullpen, 40 Alabama fans crowded the ropes, holding souvenir footballs and glossy photographs and ceramic elephants and shouting “Roll Tide!” as varied cameras swept across them. Upstairs, a reporter from the New York Times asked Saban what he would say to those who believe that men like him — like Joe Paterno — have too much power in relation to their institutions. “Well,” Saban said, “it’s not true,” and then he praised his athletic director and the school’s chancellor (whose salary, as it happens, is approximately one-tenth of Saban’s own compensation package).

There was an awkward pause when he finished, Saban staring the room into silence. Somebody restored normalcy by asking a question about football coaching. Soon after, while answering a query about the impending four-team playoff and the potential of including only the major conference champions, Saban, without naming names, rubbed it in the face of weak sisters (like the Big Ten) who have raised that possibility. The SEC, he said, is “a really, really strong conference,” and shouldn’t be penalized for it; if the SEC deserves two teams in the national championship game, nobody should stand in the SEC’s way. This, he assured us, is what the fans want.

“I think, to be quite honest with you, whoever’s making statements about conference champions is really making a statement against the SEC (and against any league who has more than one good team who would qualify),” he said.5

When it was over, he thanked the media again “for all that you do for student-athletes.” A dozen camera crews followed him out the door and down the hall. “Roll Tide!” the fans downstairs shouted, and the celebration carried on.