What They Need: National League 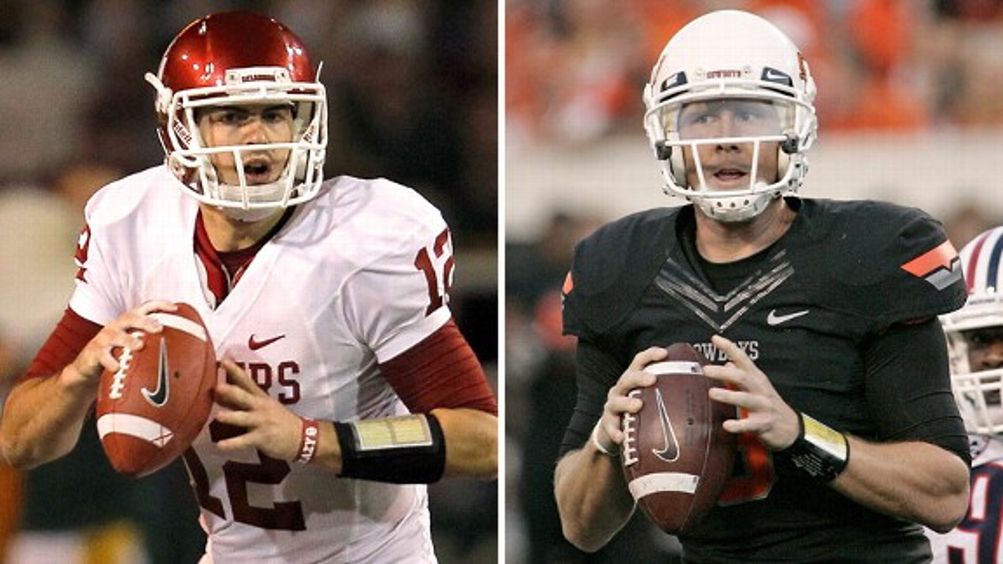 I’d rather see the Ducks offense and defense scrimmage. Or just a Ducks practice, so we could see how it is they’re able to run their offense that fast with minimal miscues. Or, forget the practice, let’s just see the Ducks’ offensive skill guys run the 40 over and over.

What an opportunity that UCLA job will be for somebody. They should be a lot better, the Bruins. The monopoly in L.A. remains, and firmly. The UCLA campus and surrounding environs are surreally pleasant. Good school. Great weather. They’ve had decent recruiting classes, but apparently not the kind you need to compete with USC. Maybe they’re not cheating. Maybe USC is still cheating and UCLA isn’t. I don’t know. I’m grabbing at straws here.

I wonder if seeing how much talent USC still has and still gets despite NCAA trouble was a factor in Urban Meyer feeling good about taking the Buckeyes job. Trojans: “Boo-hoo, now we have fewer blue-chip recruits to use as third-stringers and we get Christmas off. Woe are we. Alms for the poor.” As of right now — right now being like two days ago when I wrote this — USC has the highest star average among 2012 recruiting classes, according to Rivals. Last year’s bunch, according to Rivals, was fourth-best overall in the nation. Feel the sting of the NCAA!

There are two ways to win during rivalry week if you’re an ACC team. The first is to have a rival who’s also in the ACC. The second is to play John Brantley’s team.1 Clemson comes into the conference championship after a pair of bad losses, but one game it did not lose this season was the one in Blacksburg. If Tech hadn’t laid an egg that day, it’d be playing for a spot in the national title game this weekend. As it stands, it’s part of a long line that’s formed behind Alabama, whose players will be spending the weekend catching up on book-learnin’ and eating pulled-pork sandwiches and whose coach will be disassembled and stowed in his handsome pewter storage case.

The Hokies have been almost great for so long that they’re easy to forget about. But Beamer and those guys are consistently consistent. This should be a heck of a game. Bud Foster trying to slow down Sammy Watkins & Co. When a fancy team like Clemson starts losing, it’s fun to see whether it rights the ship or drowns, and if it does right it against a tough-minded, Beamer-coached squad out for revenge, it’ll be quite a trick. The ACC title doesn’t mean anything, but beating VT twice in one year would.

This seems like a consolation game for Wisconsin, since many had the Badgers penciled in for the BCS title game halfway through the season. All college football fans know that feeling, when you know it has to happen this year, and then it doesn’t. If the Badgers don’t at least bring home a Big Ten title, it’ll be a disappointing campaign indeed, and this Saturday’s tilt in Indianapolis gives a chance for a championship and for revenge. The triplets for the Badgers are Russell Wilson, Nick Toon, and Montee Ball, and at least two of them, if not all three, are gone at season’s end. Will they be focused? The Spartans will be. Pasadena’s quite the vacation from a long Michigan winter, and besides that, it won’t be long before Meyer has Ohio State back in control of this conference, so Wisconsin and Michigan State need to get a ring while they can. As Coach Meyer learned over the past year, girls’ volleyball just ain’t all that exciting. That’s the sort of sport the other Big Ten teams are going to have to win titles in once Urb gets things rolling.

They say there’s nothing LSU can do or not do to lose its BCS title game spot, and I’m OK with that because the Tigers have played a murderous schedule, but let’s go ahead and admit that since LSU is in the clubhouse, this is one of the emptier SEC championships in memory. You never know which games the no-playoff system is going to throw into the spotlight and which ones it’s going to deemphasize, and this one here has been deemphasized to hell. I’m not an athletic department accountant, so whether my SEC East team goes to a lesser BCS bowl or one of the regular bowls never seems important. It’s a big deal for Houston, likely a Sugar Bowl invite, but for Georgia, not so much.

If Georgia somehow wins — the somehow, specifically, would be LSU downshifting the old turbo — the Bulldogs will have a nice time painting the words SEC CHAMPION on the stadium wall, and the Bulldog faithful will get some badly needed new T-shirts. But Mark Richt is already off the hot seat, and losing to the best college defense in 10 or more years won’t put him back on it, and even if Georgia wins, everyone will know that it’s the third- or fourth-best team in the conference. Maybe even fifth best. The Bulldogs lost to South Carolina, the only elite-ish SEC team they played. The scheduling gods smile on everyone in time, and this season they were positively beaming at Athens. (I know, leave it to a Florida grad to point this out, but also it’s a fact.) Georgia avoided playing Alabama, Arkansas, and, until now, LSU. Richt was in real trouble with the alumni when he lost to two teams that are better than Georgia (Boise St. and South Carolina), and now he’s super-duper because the Bulldogs beat 10 teams they’re better than. Look, he’s a good coach. Can we just leave him the heck alone?

I don’t think Les Miles and John Chavis and their ilk will take their collective foot off the gas intentionally, but it wouldn’t be surprising to see some level of emotional letdown from the Tigers. On the other hand, they love to compete. They love to make chaos.2 They take joy in hitting. There’s something different about this team. It operates at a fever pitch of aggression that doesn’t have anything to do with anger or proving its toughness. Brutal physical collisions make the Tigers happy on a fundamental level, like the way a baby laughs if you bite his foot. And if that baby can talk, he’ll say, “Mah! Mah!” That means “More! More!” He wants you to keep biting his foot. For 60 minutes, or hopefully longer.

The only game this weekend that has any chance of impacting the BCS Championship race, and it’s not a conference championship. I guess if college football’s claim to excitement is its tense regular season, the conference title games are securely the postseason. But this game here has import, and let me attempt to increase that import with the following plea: Voters, you have every right, if the Pokes win this game, to vote them ahead of Alabama. There’d be nothing wrong with that. Take rematch distaste out of it, because that shouldn’t have any bearing. Take style-of-play preference out of it, because that doesn’t matter either.3 Your job, voter, is to name the two most deserving teams. LSU is one of them. And here are three reasons why, if you’d like, you can vote Oklahoma State (if it defeats the Sooners) as the other: (1) Oklahoma State’s best two road wins are at Texas A&M and Texas, and Alabama’s are at Penn State and Auburn. Which pair is tougher? For my money, the Texas teams. (2) Alabama’s overall schedule looks a lot worse now than it did before the season. Mississippi State turned out to suck. Florida turned out to suck. Tennessee still sucks. Kansas State, on the other hand, turned out to be pretty damn good. The Crimson Tide schedule didn’t include South Carolina or Georgia, teams that, if not consistently impressive, at least don’t suck. There’s an argument to be made that Alabama has one really good win, that being Arkansas, and if Oklahoma State beats Oklahoma, it’ll also have one big-time win, so that’s a wash. (3) It’s not absurd to deem a non-fluke home loss as a worse sort of loss than a flukey road loss.

Voter, you can convince yourself to put Alabama into the big game for all sorts of reasons. Trench-related, like you think the Tide are the only team that can match LSU’s physicality for four quarters. Pedigree-related, like since the SEC is the toughest conference, you’d rather have a one-loss SEC team than a one-loss team from anywhere else. Recent-history-related, like you just saw Alabama winning a national championship the year before last, so you know they belong. If you think those ideas are compelling, go ahead and use them to do your bidding, but please, let’s not kid ourselves with the notion that Alabama, judged solely on this year’s reésumé, deserves it more than Oklahoma State. The truth is, they’re about equal.

Moving from the practical to the moral, remember in 2006 when they had a Game of the Century up in Columbus? After the Buckeyes edged out the Wolverines, the idea of a rematch for the national title had to be considered. The SEC, me included, began screaming and throwing things and claiming this was unfair, and we won the argument and sent Florida to play Ohio State, and then all the screaming was proven correct when the Gators blasted the Buckeyes. Isn’t that exactly what’s happening now? Instead of letting a one-loss team from another conference, Oklahoma State, take on the dominant titan, LSU, we’re trying to lock out the other conferences. I’m not saying LSU would get beat by the Cowboys or anyone. In fact, it seems it would not. And it didn’t seem Florida could compete with Ohio State. In the weeks leading up to that game, I didn’t hear one ESPN guy pick the Gators. And ESPN has a lot of guys. It seemed like Ohio State would win. The Buckeyes seemed to have way too much for poor old Florida to handle. I guess what I would say to my fellow SEC folks is this: That conference pride we wear like a fine coat, it’s derived from taking the best non-SEC school in the country and slapping it around in the BCS Championship. If you don’t let the best non-SEC team play, that would be prejudice that precludes pride.

Of course, the Sooners may win Saturday. Should that happen, the Tide can Roll on into New Orleans with Grantland’s unalloyed blessing, and God bless the SEC.

Previously from John Brandon:
Rivalry Week and the BCS Rat’s Nest
Can LSU Run the Table?
The Pac-12 Matters! Well … This Week.
Who’s No. 1? LSU or Alabama?
USC vs. Notre Dame and Seven Unlikely National Championship Contenders
Oklahoma vs. Texas, a Letter to Les Miles, and a Hard-To-Get Hunk
Tide vs. Gators, the Problem With UVA, and a Nice Steak in Tucson