Chris Paul and the Lakers: What Could Have Been

The Biggest Week in College Football That Doesn’t Really Matter 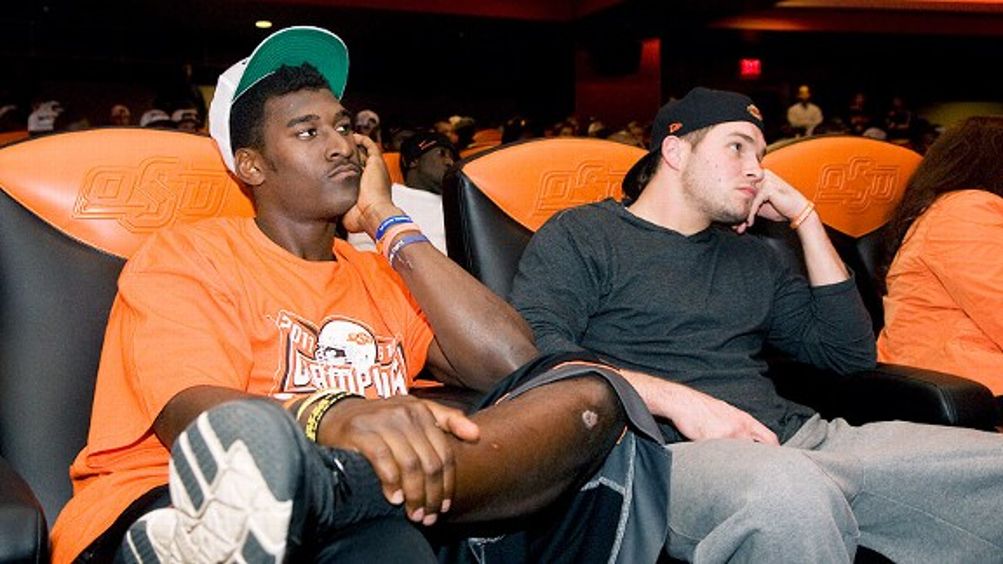 Alabama or Oklahoma State? The debate raged all day Sunday, and after the BCS was released with Alabama ranked second, a whole new set of questions arose. Were quality wins more important than quality losses? Should a rematch be played? Should a team that couldn’t even win its own conference play for the national championship?

In the midst of this dialogue, a separate debate raged over whether the BCS should be abolished in favor of a playoff. Most people support a playoff with some form of the BCS formula used to determine eligibility and seeding. Others want the BCS to remain intact.

But all these debates miss the fundamental problem — the current BCS formula is a heavily flawed disaster. This formula came very close to destroying the façade of the BCS this year and represents a ticking time bomb waiting to explode on college football.

To understand the huge problem with the BCS, you need to understand how the formula is calculated. The BCS is made of three components, each weighted one-third:

The three components are then averaged to come up with the raw score. For example, Alabama’s score in the final BCS poll was computed as such:

The Absurdity of Using a Coaches’ Poll

You know how the nation collectively cringes every time Congress votes to give itself a raise? Well, the coaches’ poll is the sports equivalent of that. You have people voting on matters that decide the fate of their own careers.

The one thing that we all thought we were in agreement on is that in some order, Alabama and Oklahoma State should be ranked second and third. Yet five coaches had Oklahoma State ranked fourth, and one even had it fifth. Of note, two of the coaches who placed Oklahoma State behind Stanford are Alabama coach Nick Saban and Stanford coach David Shaw. They might actually believe that Stanford is better than Oklahoma State. But it is hard not to be cynical in this instance.

On Saturday, prior to the SEC championship game, Nick Saban was pitching Alabama’s case, and among his reasons that Alabama should be in the championship game was that it lost in overtime, saying of the first Alabama-LSU game that “it was what football was all about, and the game ended up a 6-6 tie at the end of regulation.” He is right, and there is some merit to his argument. Losing in overtime is surely better than losing in regulation as a tiebreaker. The only issue with this is that Oklahoma State lost in double overtime. Now, sure, you can still put Bama in front of the Cowboys, but if your rationale even partly includes less penalization for an overtime loss, surely you can’t put a Stanford team that lost by 23 points at home to Oregon ahead of Oklahoma State. Saban did just that.

Do we blame Saban and Shaw in these cases? I don’t. In fact, we don’t even know if they behaved nefariously. They are doing what most people would do in this case, which is to look out for their own interests. The real issue here is that there is a blatant conflict of interest. To ask coaches not to consider how their own vote can serve themselves is to ask them to not be human. Cut the charade. The very idea of a coaches’ poll is absurd. In the BCS one-third of the formula is based on votes from people who can’t watch most games1 and are vested in the outcome of the polls. That’s why you often see these votes break down on conference lines.

Do people even know who votes in the Harris Poll? Here are the results. You will see an eclectic mix of people associated with college football. And yet somehow, this seemingly learned group of voters managed to have two voters rank Alabama fourth, nine rank Oklahoma State fourth, four rank Oklahoma State fifth, and three rank Oklahoma State sixth. Sixth! How did that happen? Here is a shocking interview with one Harris Poll voter in which he claimed that the BCS is a mess, and that he might not do as much research as he needs to. This is the voter who inexplicably had Houston fifth after getting blown out at home by Southern Mississippi, while he ranked Oklahoma State sixth. He also revealed that the Harris Poll is a “well-paying job.” That can’t make anyone feel good about this poll when you really don’t even know the level of attention being paid by voters2 and when they are compensated for their vote, incentivizing them to participate even if they have no interest.

The Computers Were Neutered

When the BCS was first initiated, computers carried a lot of weight. Slowly, their importance was eroded. Simultaneously, the BCS told the statisticians and mathematicians who run these polls that they could not include margin of victory, even though these experts claim that such an exclusion harms the accuracy of their polls. But it gets worse. No one even knows what is in some of the formulas. Last year, Jerry Palm found an error in one of the computer polls. The BCS standings had to be corrected. But the poll with the error in it was the only of the six polls that is open to the public. That’s right, these polls are being trusted on blind faith, and Palm has already found an error in the only poll that can even be checked. How do we know these polls are even proper reflections of a team’s strength, or whether any poll might have an error in it? We don’t.

The margin sank, but it was not enough to make the difference. But how close did voters not putting Oklahoma State at least third come to keeping it out of the title game? Frighteningly close. In fact, the final tally of computer polls had Alabama ranked second in two polls and third in four polls, with Oklahoma State picking up second in four polls and third in two polls. Now, because the highest and lowest polls aren’t counted, Oklahoma State had three second-place polls count and one third-place poll count, while Alabama had the opposite. But if one of those two computer polls with Alabama in second had switched them to third, Oklahoma State would have had all second-place polls count and the computer scores would have been changed. The result, coupled with no one voting Alabama and Oklahoma State lower than third (which would seem to be a no-brainer), is as follows:

Oklahoma State would have then moved into second and made the championship game. The BCS was one computer poll away from having to explain that Oklahoma State did not make the title game because several people, some with selfish interests, voted it below third.3

What is to stop someone from leaving Alabama or Oklahoma State completely out of his or her poll? There is no system of checks and balances. Ironically, in the original BCS several parameters were used to determine the rankings. Four components were used: the human polls, the computer polls, strength of schedule, and number of losses. The four components were summed together, with a lower score being better. This division of influence was put in place precisely because humans are biased and computers can’t be entirely trusted. But as the rankings expectedly did not agree with human polls (which is what was wanted), the general populace was outraged, and slowly, over the years, parameters were added and taken away from the formula until finally the human polls were weighted at two-thirds and the computer polls at one-third with nothing else considered.

This shifting in formulas took away the checks that prevent voters from going rogue. It came dangerously close to changing who played in the title game this year. The time has come to change the formula again.

The BCS must dump the human polls and replace them with a selection committee similar to the one used in college basketball. Let an objective group of people collectively determine a ranking of who should play in the championship game (or make a playoff if a shift is made to that system). Anyone with a vested interest would have to abstain from the discussion. At least that way there would be accountability, and a rogue or uninformed person couldn’t hijack the entire process and ruin a season. Let this still count for two-thirds.

The computers can still be used for one-third, just to check the committee’s power. But the computer pollsters who refuse to release their formulas should be removed from the BCS. You must have transparency, and BCS experts like Jerry Palm need to be able to verify that the formulas are calculated correctly.

It is time for the BCS to be proactive. The BCS has changed its formula in the past only after a specific event forced them to, after the damage had been done. The system is open to being manipulated by bias, inaccuracy, ignorance, and even corruption.4 A system consisting of unknown computer formulas, vested human voters, and voters who may or may not do proper research is no way to determine a champion in a billion-dollar industry.

Vishnu Parasuraman is a consultant in the Washington, D.C., Metro Area and an editor of the All About The U blog. He is a graduate of the University of Miami with an MBA from Carnegie Mellon University. Follow him on Twitter: @vrp2003.

Previously from Vishnu Parasuraman:
Everything You Could Ever Want to Know About the New NBA Labor Deal
The NBA Lockout: Why the Players Will Cave