The Twilight of the Andrew Luck Era at Stanford

Winners and Losers of the NBA Lockout 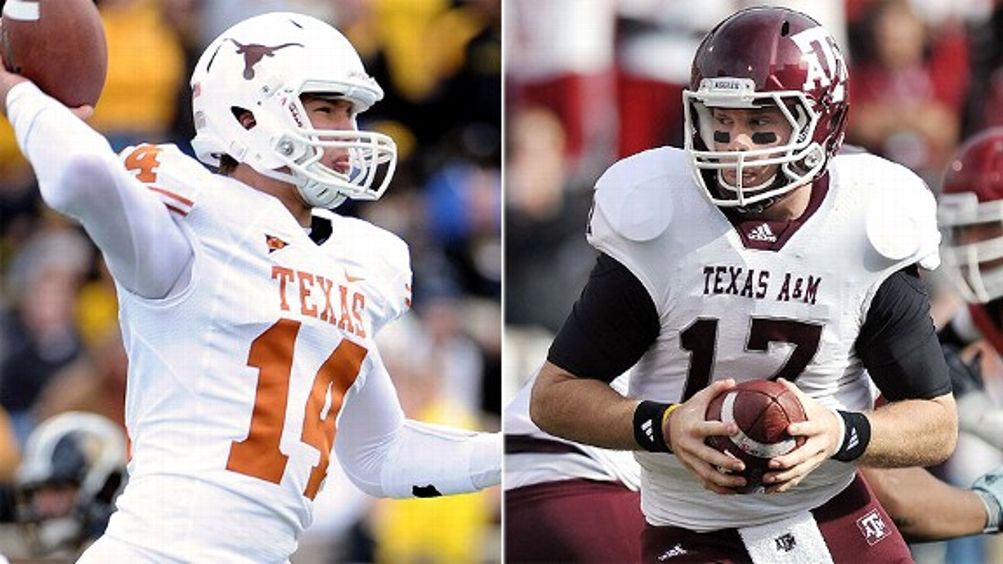 Editor’s note: For Rivalry Week, we invited the sports editors of several college newspapers to compete in a friendly write-off. To vote on who won, visit our Facebook page. To read yesterday’s columns about Auburn-Alabama, click here.

With Texas A&M leaving for the Southeastern Conference after this season, this year’s annual Thanksgiving clash might just be the biggest in the rivalry’s history.

And both teams are limping into it.

Texas is banged-up all along the depth chart. Its most important player — Fozzy Whittaker — is out for the season. It doesn’t have a quarterback.Its best receiver, Jaxon Shipley, is doubtful. And it has always had problems at Kyle Field.

Texas A&M can’t string together a full four quarters to save its life. No matter how explosive or dynamic the offense, the Aggies have become second-half choke artists. Four double-digit leads have been blown. The defense — especially the secondary — has been abused, and the rest of the team has been exploited as a fraud: A popular choice to win the Big 12 still wasn’t bowl-eligible by November 17.

Picking a winner in this thing is like deciding between Milk of Magnesia or Miralax: Both choices leave you fidgeting uncomfortably. But let’s go with the Longhorns here, if only because they’re less likely to crap the bed.

Texas has been consistent in each of the games it has played. When the Longhorns win, there’s rarely a doubt (with the exception of a weird 17-16 win over BYU). When they lose, it’s a stinker. Unlike the Aggies, they haven’t blown a second-half lead — Aggies here will argue that you have to have a lead in order to blow one. You know what you’re getting with this Texas team. And against the Aggies, in this whopper of a game, it’s going to bring its best effort.

Texas is going to run the ball — a lot. (This is all dependent on the health of star tailbacks Malcolm Brown — turf toe — and Joe Bergeron — hamstring — who will likely be ready for the November 24 game.) Quarterbacks David Ash and Case McCoy aren’t equipped to throw the ball 30 times a game, which is unfortunate for UT because the Gaggies have the second-worst pass defense in the nation. So the Longhorns will line up in a jumbo set and pound the rock again and again. It’s not that the Aggies, who operate out of a base 3-4 defense, don’t have a good front seven — they do. But with defensive tackle Jonathan Mathis out for the year with a knee injury and Stephen Barrera missing the past two seasons with a knee injury, their depth has taken a hit. In A&M’s overtime loss to Missouri, it gave up 284 rushing yards and three touchdowns. In its most recent loss, Kansas State quarterback Collin Klein scored five touchdowns.

That’s a shift from the Aggies’ first three losses, when their shoddy pass coverage allowed Brandon Weeden, Tyler Wilson, and Landry Jones to pile up a combined 1,203 yards and seven touchdowns. Ash and McCoy won’t sniff that, so co-offensive coordinator Bryan Harsin will run it at least 40 times.

Texas A&M entered the season with the best tandem of running backs in the conference. But Christine Michael suffered his second straight season-ending knee injury on November 5, which leaves the entirety of the load to Cyrus Gray — who’s also injured. Gray has been diagnosed with a stress fracture in his right shoulder, an injury he suffered last week against Kansas. If he can even play, he won’t make nearly the impact he did last season against Texas, when he ran for 233 yards and two touchdowns. Backing up Gray are Ben Malena and Will Randolph. Who? Exactly.

Whomever A&M sends out at tailback faces some tough sledding. Right now, the Longhorns sit at no. 6 in the nation in rush defense and are led by stout defensive tackle Kheeston Randall and linebacker Emmanuel Acho, a tackling machine (nine a game). Off the edge, defensive ends Jackson Jeffcoat and Alex Okafor have teamed up for double digit sacks and are just now starting to find their groove after a slow start.

The Aggies have their advantages, namely the explosive passing attack, which ranks 15th in the country. Quarterback Ryan Tannehill is enjoying a fine season, and has at his disposal a trifecta of receivers that’s as good as any in the country: Ryan Swope, Jeff Fuller, and Uzoma Nwachukwu. Tannehill is a converted wideout himself, and the Longhorns will have to be ready for him to pull the ball down and run.

That aspect of the game is undoubtedly an advantage for the Aggies, but Texas has held its own against strong passing attacks — a 55-17 disaster against Oklahoma notwithstanding. Sophomore Carrington Byndom is as good a cornerback as there is in the conference, and he’ll likely be paired with the 6-foot-4 Fuller. Byndom has played well against bigger receivers this year, slowing down (to an extent) both Justin Blackmon and OU’s Kenny Stills. The Longhorns will have little Quandre Diggs run around with Swope all day and use Adrian Phillips or Kenny Vaccaro on Nwachukwu. Hope that safety Blake Gideon doesn’t line up over anyone with speed, and the Longhorns should at least be able to keep A&M in check.

Finally, there’s that last, annoying Aggie nuisance: Kyle Field. If the soon-to-be-meaningless fight songs don’t bother you — you can’t really “saw the horns off” a Tiger, Gator, Bulldog, Rebel Black Bear, Gamecock, Commodore, Wildcat, or Volunteer. I’ll give you a Razorback and an Elephant, fine. “Saw their tusks off!” — the lack of female cheerleaders will.

Winning a night game in College Station won’t be easy — it never is. Two seasons ago, A&M had national champion-bound Texas on the ropes before the Longhorns pulled it out in the fourth quarter. Two years before that, the Aggies beat no. 13 Texas, 38-30. The game’s on Thanksgiving night, in front of a national audience, so the Aggie faithful will be even more amped to watch their team play the Longhorns one last time before they bounce to the SEC. I guess they’re going to go back to their farms disappointed.

“Ten Aggies can yell louder than a hundred of anybody else,” said mid-1950s A&M coach and Alabama legend Paul “Bear” Bryant.

We are the Aggies, the Aggies are we. That means honor and loyalty; it means an unconquerable sense of pride. Above all of Texas A&M’s century-old traditions, nothing comes close to wanting to beat the hell out of t.u.

A&M has been singing “Good-bye to Texas University” since 1920 thanks to the fight song by World War I veteran J.V. “Pinky” Wilson. And if proclaiming our hatred for the burnt orange at every single sporting event imaginable wasn’t enough, well, we also link arms and legs to “Saw Varsity’s Horns Off.” This pride-building ritual involves the entirety of College Station’s landmark Kyle Field — more than 80,000 Aggies — swaying back and forth, alternating row by row until the message is sent:

We live to hate the Longhorns. And if you happen to be an LSU Tiger or a Georgia Bulldog, then deal with it and enjoy.

This hatred is at the core of who we are as students and alumni. It’s an in-state identity that separates us from them. Love the smooth-talking Texas coach, Mack Brown? Got a Longhorns decal on your car? Have you ever mentioned even the slightest affinity for the color orange? Then you’re a tea-sip, another of A&M’s longstanding terms meant to demean t.u.

Without A&M, t.u.’s longhorn mascot, Bevo, would not exist. Without “Gig ’em,” there is no “Hook ’em.” And without this rivalry — one that dates back to an 1894 meeting in Austin — these two institutions would not be who they are today.

A&M’s only national championship and Heisman Trophy — 1939 and 1957, respectively — both occurred before t.u. accomplished either. Put those distant victories aside, and it’s always been big brother picking on the overlooked and oft-perceived runt of the two. In the rivalry’s 117-year history, t.u. leads 75-37-5. The Longhorns have won more national championships (4), conference titles (32 to 18), and regular-season games (850 to 674).

It’s a shadow A&M could never escape — not until the Southeastern Conference extended its hand of invitation, that is. Effective July 1, 2012, A&M will be rid of the unstable mess that has become the Big 12. Whether that results in a Crimson Tide beatdown or not, the move comes at the price of sacrificing everything we have ever known as football faithful. Texas athletic director DeLoss Dodds essentially declared the rivalry postponed after this season in an October e-mail to A&M athletic director Bill Byrne, conveniently informing the Aggies that t.u.’s schedule is locked in until 2018.

“What we have right now is a full schedule, but if any future options are available, the decision will not be made by just one person,” Dodds said in a statement.

I’m skipping Thanksgiving with my family for A&M’s Lone Star Showdown finale against t.u. This climatic matchup is too important, too engrained into the person that I have become in my time at A&M. The same goes for every maroon-and-white follower in College Station. But what’s at stake for either team going in? Not a whole lot, to be honest — pride more than anything else. The Aggies (6-5) entered the 2011 campaign ranked no. 9 in the coaches’ poll and were picked by some as a dark horse contender for the national title. Then the game against current no. 4 Oklahoma State happened, the first matchup of top-10 teams at Kyle Field since the 1970s and the first in a series of second-half collapses that earned A&M the title of “First-half Aggies” on SportsCenter one evening.

A&M’s defense has surrendered 4,401 yards this season, “good” for no. 76 in the FBS. That’s about the number of times an announcer has wrongly pronounced senior quarterback Ryan Tannehill’s name this year (it’s not Tanny-hill.) On top of being the worst statistical pass defense in college football, the Aggies witnessed three opposing quarterbacks etch their names into school record books for most passing yards in a single game.

All of those yards come as a price for pressuring the quarterback. Though it typically results in gaping holes down the middle, A&M defensive coordinator Tim DeRuyter’s blitzing scheme produces results, ranking first in the nation in total team sacks at 41. Junior linebacker Sean Porter, the defense’s standout performer, is 11th nationally with 8.5 sacks. Hearing that, one must surely think all of that pressure provides some timely turnovers, right? Think again. A&M has forced a total of 13 forgettable turnovers while losing 19 of its own.

Coach Mike Sherman’s offense, no. 6 in FBS at 512.4 yards per game with 55 touchdowns, tends to disappear at the most inopportune moments. Tannehill fumbles near the 50-yard line, blowing A&M’s chance to kick a game-winner in the closing seconds. Senior Jeff Fuller, who returned this season to improve his draft stock, drops a pivotal two-point conversion to win an overtime classic against Kansas State. Even with the talented running back combination of Cyrus Gray and Christine Michael, third-and-short suddenly becomes third-and-impossible.

For all of the mind-numbing frustrations and ruined Saturdays, this is still our team. The 12th Man stands ready to welcome Coach Mack and the burnt orange to what should be a memorable holiday experience at Kyle. This is A&M’s game to win — its chance to vindicate the decision of leaving t.u. behind for the next decade. We stand 12-12 in the past 24 Thanksgiving rivalry meetings. This last game will determine Lucky 13.

Aggies never lose, they just run out of time.