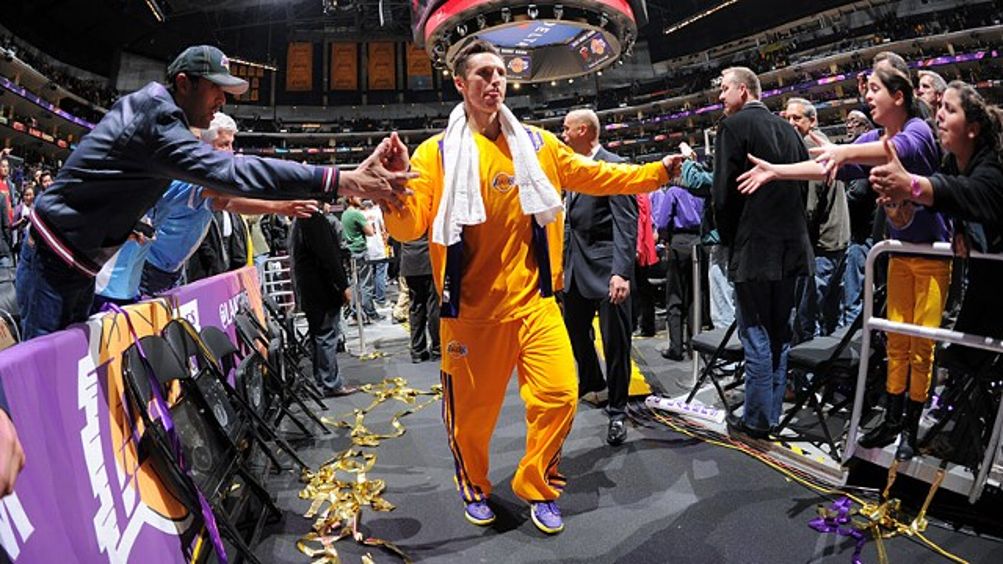 The window of opportunity to win an NBA championship is closing for a handful of notable players. Dirk Nowitzki, Kobe Bryant, Tim Duncan, and Kevin Garnett are probably the first names that pop into your head — legendary veterans making one final run. Old dudes like Jason Kidd, Rasheed Wallace, Chauncey Billups, or Ray Allen may come to mind, too. But each of those players has already won at least one championship. Adding one more will only incrementally alter their legacies.

But what about the players on the cusp of ‘The Barkley-Marino Zone’ — retired championship-less superstars?

To highlight these players, I’ve constructed this year’s Rapidly Closing Window of Opportunity to Win an NBA Championship All-Stars. Most NBA players claim to play the game for the glory of winning a championship, creating a magical season of memories with a team of brothers. It defines their professional existence. The players on this All-Star team have one foot out the league’s door, competing against their rapidly deteriorating physical abilities to redefine a career that will look wayward without a championship.

Do these players still have a chance, or have their windows already closed?

Steve Nash, PG, Los Angeles Lakers (39 years, 1 day old)
Last Friday, I was with a group of friends who were passively watching the Lakers play the Timberwolves. A girl in our party who knows nothing about sports saw a close-up of Steve Nash and was quick to point out that he looked considerably older than everyone else on the court, even with his ‘cool dad haircut.’ Though her judgment was derived strictly from a casual look at Nash, it reinforced the ‘eyeball test.’ Steve Nash was already smaller, slower, and less physically gifted during his two MVP seasons. His physical regression will become more costly as he plays into his 40s.

The captain of the Closing-Window All-Stars, Nash is doomed as a Laker, and now his chance of winning a championship this season is remote. With two more seasons left on his contract, his championship hopes likely depend on the Lakers signing LeBron during the summer of 2014 — Nash will likely be used as something between a post-Bulls Steve Kerr and a human victory cigar.

Steve Nash’s window actually closed when Robert Horry bodychecked him into the scorer’s table during the 2007 playoffs. Or maybe it happened in 2004, when Mark Cuban refused to pay him because he was already ‘too old and broken down.’

Grant Hill, SG/SF, Los Angeles Clippers (40 years, 126 days old)
When I was a kid, I owned a red Grant Hill Pistons jersey. I also drank Sprite and owned Fila basketball shoes. None of these brands maintained a presence in my life beyond that awkward trend cycle. It’s weird to realize that even though Grant Hill is widely known, it’s difficult to visualize his actual playing style. Can you remember a single great moment of his NBA career? Hill has been branded one of the smartest to ever play the game, but even a closing-window title at the end of his run won’t change the tragedy of his career.

If Hill were really championship-chasing, he probably would have left the Phoenix Suns before this offseason. It seems like his real goals are personal — staying on the court enough to make a tangible impact on a team, contributing solid minutes in at least 50 games per year. But with so many swingmen on the Clippers, can he really make a difference? The team is already lousy with the “veteran leader” archetype thanks to Chauncey Billups and Chris Paul.

Grant Hill’s window actually closed when Tim Duncan decided to stay in San Antonio instead of joining him in Orlando.

Vince Carter, F, Dallas Mavericks (36 years, 13 days)
One of the more random NBA stories of the year: Kevin Durant’s favorite team growing up was the Toronto Raptors. It reminds me of a simpler time, back when a player like JaVale McGee would have become a max contract guy, based on highlights and dunk contest performance, instead of the official human meme of the NBA. Would Kevin Durant be a better player now if he hadn’t spent his formative years uniform-lusting for the Raptors, watching Air Canada play NBA Jam–in-real-life with his cousin?

Carter was labeled as lazy, soft, and too eager to shoot a contested 3-pointer rather than take it to the rim. As he floated from the Nets to the Magic to the Suns, it felt as though he’d lost his leaping ability, symbolically pulled back down to Earth by the same chinstrap beard that he used to hide his McNabbian weight gain. It probably wouldn’t have been so bad if his contract weren’t so burdensome. Now he’s on the Mavericks with a reasonable contract, reduced to a tradable ‘asset.’ His career actually makes more sense if he never becomes a champion.

Vince Carter’s window actually closed when he jumped over that French dude and defined his playing career with a remarkable highlight in a meaningless game.

Antawn Jamison, F, Los Angeles Lakers (36 years, 241 days)
Antawn Jamison deserves some of the blame for LeBron James’s departure from Cleveland. Back then, Danny Ferry was doing his best to give his cap-strapped team a chance to ‘win now’ because that was theoretically the only thing that would keep LeBron from leaving. His big in-season acquisition was Jamison from the Washington Wizards, which now looks like it was a historically overrated team because of a thin Eastern Conference and Gilbert Arenas’s innovative use of social media.

Jamison signed with the Lakers for the veteran’s minimum and has seen limited action with Mike D’Antoni as coach. It’s a sad and unfair end to Jamison’s career because only about 8 percent of the league could actually fit into D’Antoni’s system anyway. During Jamison’s prime, he was a prolific scorer who probably fit best as the sixth man on a good team, which explains why he won Sixth Man of the Year on the 2004 Mavericks. Right now, one final storybook run with Jamison minimizing his role for a championship doesn’t look likely. We can’t all go out on top like David Robinson. Or Juwan Howard.

Antawn Jamison’s window actually closed when he led the Cavaliers to a record-breaking 26-game losing streak during the depressing season after LeBron left.

Marcus Camby, C, New York Knicks (38 years, 323 days)
I wonder if Marcus Camby ever looks at the career of his Knicks teammate Tyson Chandler and wishes that he experienced his NBA prime when the league had appropriate expectations for centers. With prolific point forwards and power guards, teams can now construct their teams to optimize their centers’ limited offensive abilities. We finally accepted that just because you are 7 feet tall, you aren’t innately granted a post game.

It is pretty weird seeing the Knicks and their assembly line of aged big men serve as one tall, collective backup for Chandler. Depending on the opponent, Mike Woodson can throw Rasheed Wallace, Kurt Thomas, or Camby out there. Until they all get injured.

Camby’s window actually closed when his Knicks lost to the Spurs in the 1999 NBA Finals. And even then, that championship wouldn’t have counted — it was a lockout-shortened season and they were an 8-seed.

Jerry Stackhouse, SF/SG, Brooklyn Nets (38 years, 95 days)
Wasn’t Jerry Stackhouse a Maverick when they won the championship in 2010? No, Jerry Stackhouse was actually a key contributor to the ‘choker’ Mavericks, who frittered away a 2-0 lead against the Heat in the 2006 NBA Finals, then lost to the 8-seed Warriors in the first round of the 2007 NBA playoffs. I’d say he’s fortunate that the Nets needed a little bit more toughness (or maybe just needed to fill the roster on the cheap after committing too much money to a mediocre core).

Jerry Stackhouse’s window probably actually closed when he ruined his own under-the-table arrangement to re-sign with the Mavericks after they attempted to fake-trade him to the Nets for Jason Kidd. 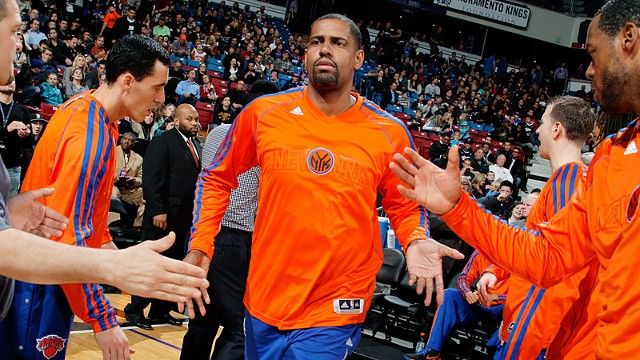 Kurt Thomas, PF, New York Knicks (40 years, 127 days)
The oldest player in the NBA has to be on the Closing-Window All-Stars.

If the NBA created an ‘Annual Trade Piece’ Hall of Fame for players who were legitimately skilled, signed to reasonable contracts, and always remained professional despite primarily existing as tradable assets, Kurt Thomas might be the inaugural inductee. Since leaving the Knicks in 2005, he has played for seven teams, never for more than two consecutive seasons.

Thomas’s window actually closed and reopened a few times since stints on the Knicks, Suns, Spurs, and Bulls all came during competitive stretches for each team.

Pablo Prigioni, G, New York Knicks (35 years, 269 days)
Pablo Prigioni is the oldest rookie in the last 40 years to play in the NBA, which makes me appreciate basketball as one of the few sports in which an old dude can still come in and find an appropriate role on a team. (Remember that time a 73-year-old man made a college basketball team?) Seeing Prigioni play on the Knicks is compelling because he speaks the language of ‘basketball’ so well that any perceived cultural barriers cease to exist.

Even if Prigioni isn’t able to win a championship during his barely cracked window of opportunity, his decision to come to America after achieving everything he possibly could in Europe still represents a wide-open window for anyone else in the NBA. These chances are few. There’s plenty of reason for optimism and pride despite being in the latter stage of one’s career.

Thousands of marginal players float in and out of our NBA consciousness, eventually fading from the league and landing somewhere between the D-League, China, and retirement. The average NBA career is just under six seasons, so maybe being a Closing-Window All-Star is a great accomplishment. It means that, more than likely, you’ve had a career that has lasted close to two decades, were fortunate enough to play in ‘the overpaid era’ of the NBA, and most likely attended at least one All-Star Game due to the ‘production’ stats that kept you in the league for so long. They’re all winners of a genetic lottery, able to withstand the physical and mental stress of being professional athletes since they were teenagers.

If anything, all of these guys deserve our respect for not taking the easy way out and just signing with the Heat.