Did Kevin Durant Make the Leap?

Coldhearted: Back From the Brink 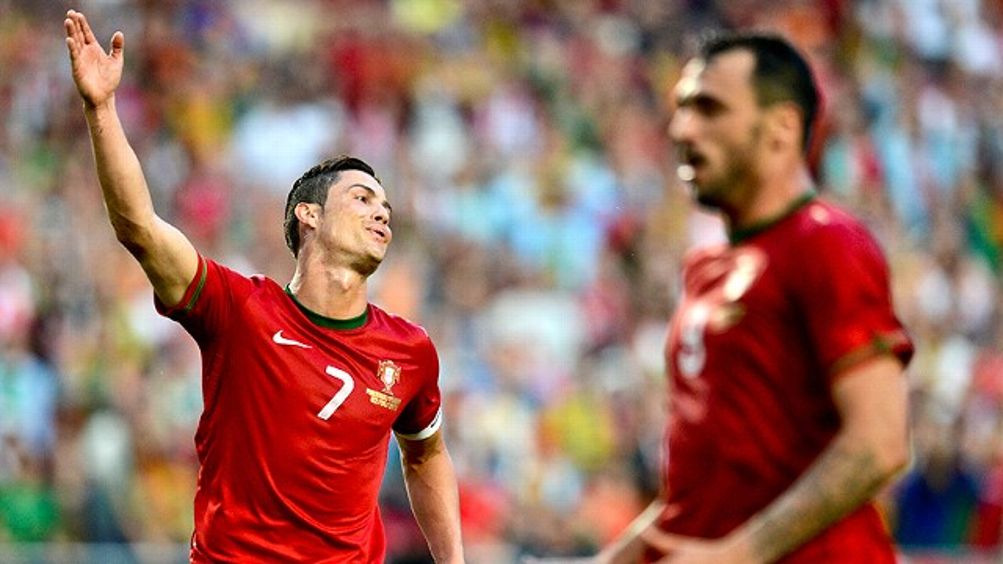 Euro 2012 kicks off Friday at National Stadium in Warsaw. The producers of the Turin Olympics opening ceremony are in charge of the festivities in Poland, and it has been reported that the tournament will be inaugurated, musically, with a performance of Frédéric Chopin’s Etude in A Minor.

Etudes, he said, slowly making piano virtuoso finger exercises in the air, are short pieces, but they’re incredibly hard to play. So while LMFAO may have been a more inspirational choice to light this tournament’s candle, the piece of music that Hungarian pianist Adam Gyorgy is performing is actually quite fitting.

There’s nothing like the compression and difficulty of the Euros. Sixteen teams, four groups — the best two teams move on to the knockout stages and the whole dance is over in three weeks (compared to the monthlong World Cup). The competition to get into the tournament is tough, and to win it all is even tougher. With matches happening twice a day for the next two weeks, here are some of the major story lines to consider as the tournament begins.

I can’t get this out of my head.

Ronaldo against Barcelona in April. The “calm down” goal in El Clasico. The one that put Real Madrid over the top, the one that slayed Barca and brought an end to their La Liga run. For years, Ronaldo has sat in the shadow of Lionel Messi. Watching as the tiny Argentine dynamo racked up three Ballon d’Or trophies in a row, despite the Portuguese winger’s gobsmacking numbers during the same period of time.1

The big difference between them: trophies. Messi won and Ronaldo didn’t. While engravers started stenciling “Barcelona” on pretty much any trophy the Catalan team competed for, Ronaldo sat alone, with only his supermodel girlfriend and six best friends2 to console him.

Until this year. A Cristiano Ronaldo–powered Real Madrid won La Liga this season, finally wresting the crown back from Barcelona. And now Ronaldo enters Euro 2012 with a new collectible in his trophy cabinet and perhaps a little less weight on his shoulders. Despite playing in the Group of Death, along with Holland and Germany, Portugal has a lot of happy campers. Raul Meireles won the Champions League (though he was banned for the final) while Fábio Coentrão and Pepe joined Ronaldo in Real’s La Liga championship. After the heartbreak of losing Euro 2004 at home to Greece and the disappointment of losing an electric quarterfinals match to Germany in 2008, perhaps Portugal, with all eyes on their stiff group competition, can finally fulfill some of their promise. Perhaps, just like he did with his club side, Ronaldo can lead them there.

No team in this tournament has as much to play for as the Netherlands. The Dutch aren’t just competing for a trophy (which they have a good chance of winning, by the way), they’re on a quest to restore their football reputation.

Holland lost the 2010 World Cup in spectacular, thundering mantis style. The lasting image many remember from that tournament, more even than Spain lifting the World Cup, was Dutch midfielder Nigel De Jong kicking his Spanish counterpart in the chest.

It wasn’t just a stupid foul by De Jong, it was a repudiation of the Dutch footballing philosophy. This was the home of Cruyff and Van Basten and Bergkamp. Of Total Football and Ajax. Of Holland ’88.

When Holland, despite all their attacking talent, chose to quite literally attack Spain, they were saying, “We can’t play these guys straight up.” Spain beat them at their own game, showing the Dutch masters how beautiful football can really look. Losing a final is tough. Losing it like that is a national embarrassment. Henk Spaan, editor of the Dutch magazine Hard Gras, wrote, “They destroyed a 40-year tradition, dragged it through the shit.”

Well, never let it be said there are no second chances in football.3 The Dutch return, largely intact, perhaps even better. And they’ve made, at least verbally, a new commitment to their footballing roots. Bert Van Marwijk, somewhat surprisingly, has kept his job. I say surprisingly because Holland is not synonymous with managerial stability — or intra-team harmony, for that matter.

After scoring 37 goals in 10 qualifying matches, the Dutch are probably the most on-form national side in the tournament. And if you were playing a fantasy Euro game, you could do worse than to draft the attacking quintet of Robin Van Persie, Wesley Sneijder, Arjen Robben, Klaas-Jan Huntelaar, and Rafael Van der Vaart. Here’s the problem, though: You know who any one of those guys would take in a fantasy draft? Himself. In club football, each of those players revels in having his entire team revolve around him (less so with Van der Vaart at Tottenham). The real job for Van Marwijk isn’t restoring the Dutch way of doing things; it’s deciding who gets to do it.

3. The Battle for the Channel

England enter Euro 2012 with health levels approaching those of the old guys from Space Cowboys and the internal stability of a three-day party at Jesse Pinkman’s house.

Follow me to the emotional-trauma tent: First Fabio Capello sensationally resigned his post after clashing with the English FA over whether John Terry would remain as captain. The reason the FA were a little squeamish about Terry? He allegedly racially abused Queens Park Rangers defender Anton Ferdinand, a charge for which he will stand trial next month. Anton’s brother is Rio Ferdinand. There was a lot of speculation that, understandably, Rio and John might not be remaking Lethal Weapon anytime soon. New England manager Roy Hodgson was forced to choose between the two and went with Terry, for “football reasons.” Despite losing players like Gary Cahill and Gareth Barry to injury in the weeks leading up to the tournament, Hodgson has still refused to call up Ferdinand, causing a furor in the typically sedate British media.

Compound that with England’s best player, Wayne Rooney, being suspended for the first two games of the tournament, the team still not knowing their best starting XI, and the press calling Poland and Ukraine — two different countries — POLKRAINE. Good one.

You’d expect England to fail spectacularly were it not for the fact that (a) maybe having low expectations will finally produce some better results, and (b) their first game is against a team whose onetime captain just pretended to wipe his ass with a national team jersey while sitting on the bench. France! The French also lost to one of their best midfielders, Yann M’Vila, to injury. Also? Their best central defender is trying out an ill-advised cornrows look.

I seriously cannot wait for England vs. France on Monday, June 11. I’m pretty sure it’ll start a naval war.

4. The Next Andrei Arshavin

I don’t mean the next diminutive Russian, anti-woman-driving crusader and fashion designer. For that we have … Andrei Arshavin. No, I mean the breakout star of the tournament.

In 2008, Arshavin was, for the most part, a secret. At least to many Western soccer fans. Here was this little meerkat-looking son of gun, almost single-handedly tearing Holland to pieces and drawing attention away from most of Europe’s biggest clubs’ sides.

These tournaments can mint players. They can go from YouTube highlight reels and the frenzied praise of Twitter scouts to playing behind the striker at Chelsea, Real, Barca, or Bayern.

There are a few players who make this “leap” during Euro 2012. Poland striker Robert Lewandowski scored 30 goals in 34 games for Borussia Dortmund this season and reminds some of a more rugged Robin Van Persie. Spain striker Fernando Llorente thrilled anyone who bothered to watch Athletic Bilbao’s highly entertaining run in the Europa League this season. And Italy’s Riccardo Montolivo has been a jewel of a midfielder for Fiorentina in Serie A.

But if you want a player to watch who could turn the tournament on its head, look out for Alex Oxlade-Chamberlain. The reason behind Hodgson’s inclusion of the 18-year-old Arsenal winger stems largely from his performance against A.C. Milan in the Champions League.4

On June 22, 2008, Cesc Fábregas smashed a penalty kick past Gianluigi Buffon to send Spain past Italy and into the semifinals of Euro 2008. Spain would go on to win the tournament, as well as World Cup 2010. When Fábregas beat Buffon, low and to the right, many in football were just happy they finally got over the hump. For all the talent Spain produced, their major tournament history was littered with heartbreaking group stage and quarterfinals losses.5 The general consensus was, “Good for them. They got a chance to do some ghostbusting.”

Now they get a chance to be immortal.

The 1970 Brazil team is widely considered the greatest national side ever assembled.

But if Spain manage to win their third consecutive major trophy — following wins in Euro 2008 and the 2010 World Cup — you’d have to say they’re the greatest footballing generation ever.

The core of the team that won in Austria — Iker Casillas, Sergio Ramos, Xavi, and Iniesta — is still intact. And while they may miss out on the lethal finishing and positional flexibility of David Villa (who was very capable of playing out on the left and cutting in) and the mojo of yips-sufferer Fernando Torres (who scored the winning goal against Germany in the final of Euro 2008 and seemingly hasn’t scored since), they will have able-bodied replacements in Athletic Bilbao’s Fernando Llorente and Sevilla’s Álvaro Negredo.

The major challenge facing Spain is exhaustion. Take Xavi, for instance. He’s played 202 games for Barcelona and Spain since lifting the Euro 2008 trophy, acting as the midfield metronome for club and country for nearly four straight years. Iniesta, Ramos, Sergio Busquets, and Xabi Alonso have all put in similarly Herculean shifts. Even someone like David Silva, often peripheral to the national team setup but increasingly relied upon to create goals by manager Vicente del Bosque, played in 62 games in 2011-12. These guys just might not have the gas in the tank to make it one more lap.

I, however, am very much pulling for them. Major tournaments happen every two years. We might have to wait a lifetime to see something like this Spain team again.