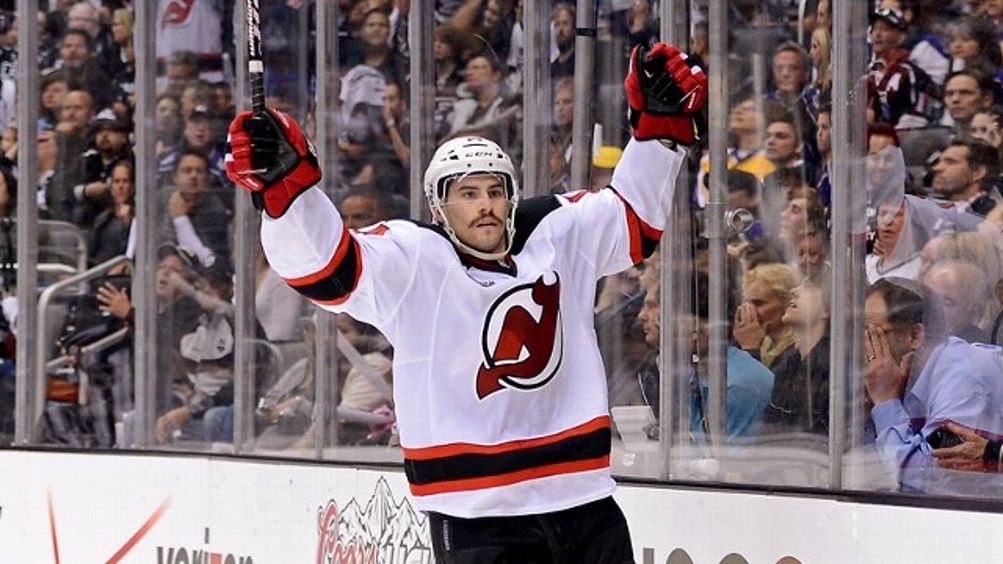 With the Devils’ season on the line, a couple of New Jersey’s players made like Richard Kimble: They took razors to their faces and then escaped their own demise.

On Tuesday, a day after a 4-0 Game 3 loss to the L.A. Kings put the Devils down three-love in the Stanley Cup finals, forward David Clarkson shaved off what had been a magnificent sneaky-ginger beard. “The beard was a little annoying,” he explained. “We were down three so I just changed it up.” And center Adam Henrique pared down his hair, too, losing the goatee but preserving a defiant ‘stache to match the one sported by teammate Ryan Carter.1

As it turned out, these acts of whiskered whimsy got results. (Perhaps it was because the man with the most famous facial hair in hockey, Lanny McDonald, was in the house.) With less than five minutes to play in the third period of a 1-1 game, Henrique wrangled a pass from Clarkson from skate to stick and shot the puck past Jonathan Quick. His goal silenced a Staples Center crowd that had hoped the night would end with the raucous and tearful presentation of the Stanley Cup. Instead, the trophy was quickly hustled out of the building along with the disappointed and drunken fans.

“A big-time play,” said head coach Peter DeBoer of Henrique’s goal. “Off a skate, a quick shot up top. I mean, especially with the way Quick has been playing. It was a goal-scorer’s play. He’s got a knack for that.”

Indeed, it was the rookie’s third game-winner of these playoffs. The other two — in Game 7 against the Florida Panthers in the first round, and in Game 6 against the New York Rangers in the Eastern Conference finals — were series-clinching goals in overtime. Last night’s was series-saving, one that shielded the Devils from the potential humiliation of a sweep.2

“I’d be lying if I didn’t say when I gave the puck to Henrique and he put it in, it was probably the best feeling I’ve had in my whole career,” said Clarkson.

He had reason to be more relieved than anyone. All series, the Devils had been unable to score first — some regretful misses by Clarkson in Game 1 certainly contributed to that — but when they finally went up 1-0 Wednesday night on a Patrik Elias goal so sharply backhanded it would be right at home on a squash court, the treasured lead lasted all of 60 seconds. A (questionable) boarding call on Clarkson gave the Kings a power play, and Drew Doughty converted almost immediately from the point to tie the game.

Meet the Americans Who Could Hoist the Stanley Cup

“It’s a tough play,” said Devils center Travis Zajac, whose torn Achilles early in the regular season afforded Henrique the opportunity to play a bigger role. “We thought it was a bad call to begin with.”

It would have been easy for New Jersey to melt down at that moment, for the players’ minds and bodies to spiral out of control. But it only seemed to make the Devils that much more focused and resolute.

“At the time it’s not going through your mind that our season’s on the line,” said Devils captain Zach Parise.3 “You’re kind of lost in the game, you’re not worried about that.”

As for Zajac, it’s possible he’ll be the next one to undergo a strategic shave. Asked whether he might consider a look like Carter’s and now Henrique’s, he laughed. “It seems like he’s a trendsetter,” he said, considering. “So I’ll have to think about it.”

Compared to the way things had gone in the first three games, the two teams traded places for Game 4 — not just in terms of the final outcome, but in the ways that it came about. Instead of the Devils hitting posts and missing open nets, it was the Kings doing the same. (One attempt by Justin Williams that clanged off the pipe was so close to going in that the Staples Center staff momentarily and mistakenly trained their hot-seat red spotlight on Martin Brodeur.)

“Right after [the tying goal] we had a breakaway,” pointed out Doughty, “and if that goes in, it’s a different story in the game.” He sounded not unlike the Devils had when discussing Ilya Kovalchuk’s near-goal in the closing minute of Game 2.

And instead of the Kings scoring goals on up-ice rushes, it was the Devils who took advantage of some space-creating passing plays. “They had a couple pretty good chances off the rush, so we have to make sure the gap is tighter,” Anze Kopitar said.

There were additional reversals of fortune. Devils had complained after Game 3 that the Kings only scored because the referee had failed to blow dead a puck that was being covered by Brodeur. In Game 4, they benefitted from the opposite: a way-too-quick whistle on what was still a live puck.

“You know, I think we wanted to make them jump on a plane and come to New Jersey,” said Brodeur, who finished with 21 saves, with a bit of a smirk. “We had to go anyway. Might as well get a game over there.”

It’s amazing how quickly moods can change. After Monday’s 4-0 Kings win, New Jersey papers were running online conversations such as “Devils Stanley Cup finals hot topic: What disgusted you most about Game 3?” and even one of Brodeur’s own sons was getting chirpy about the team.

As for the vibe in L.A., the area around Staples Center had the air of preemptive revelry in the hours before the game on Wednesday. The lines at every single restaurant were so long that several hostesses openly laughed at me and I had to resort to a nearby car wash selling tacos to get my lunch.4 Anticipating victory, people were shelling out four figures for the worst seats in the house. Celebrities prepared to celebrate — the usual suspects like Matthew Perry and Alyssa Milano were in the stands, and Halle Berry’s baby daddy was randomly milling around right behind me in the press box. (I asked someone what he was doing there, and they just shrugged and said, “He’s French-Canadian.”) By the end of the night, though, as detailed by the amazing @LAPDScanner, the atmosphere around the L.A. Live plaza had gone from lighthearted chaos to darker disarray.

“Maybe there would have been a little more sentimental value winning it on home ice,” said Kings captain Dustin Brown. “But if we win it there, we bring it right back here.”

It’s only one game, but one game was all the Devils had in mind. It’s a cliché, but it’s also the only way to operate: Down 3-0 in a series, as more than one player explained, you can’t think about winning four games. You have to focus instead on winning just one game, four different times.

It’s still a distant long shot, but at least now there’s that bounce of hope for New Jersey: win just one game back at the Prudential Center on Saturday, and suddenly we’ve got a series on our hands. (And now whoever wins the Cup won’t have to do so on the NBC Sports Network.) Sure, the Kings are 10-0 in away games this postseason. But here’s a lesser-known stat, pointed out by TSN’s James Duthie: In this year’s playoffs, the Devils are 9-1 in Games 4 through 7.

“We’ve trailed in every series,” said Parise. “We had to fight off two elimination games in the first round, we did that. Trailed against Philly, trailed against the Rangers, won big games in really tough buildings. And we’re in a tough spot still. We’re happy about the game, but we’re still in a tough spot. But we’ll try to get the next one.”

Here’s Elias with the low-angle rebound. If this had been Game 1, his effort would have hit the post.

And you shouldn’t blame Drew Doughty just because his goal came on a power play of suspect provenance. You should only sit back and appreciate the beauty of this shot’s placement.

Man oh man oh man, Darryl Sutter’s postgame interview was the awkwardest ever, right? I tragically missed it in person, but when I watched the video I reacted to it exactly like Sutter had: I pounded my hands against the table, uttered a scoffing “awesome,”5 and tried to eat my own mouth.

Taking It Coast to Coast: A Sprint Around the League

Had this column existed a year ago during the angry Vancouver-Boston series, it would have been impossible to keep up with the overflowing cache of content for this section. But this year, things have remained remarkably (and strangely) civil between the two teams. So let’s go back to some more Darryl Sutter goodness, because the man is just a treasure. Here’s an actual exchange that took place during his off-day press conference on Tuesday.

Q. Where were you when Dean [Lombardi] called you about this job? How much had you watched the Kings before that?

COACH SUTTER: I think I was in the barn.

Q. What were you doing in the barn?

COACH SUTTER: I wasn’t shoveling shit, I remember that, but I had that day. Was probably warming up. It was cold.

Q. You were literally in the barn?