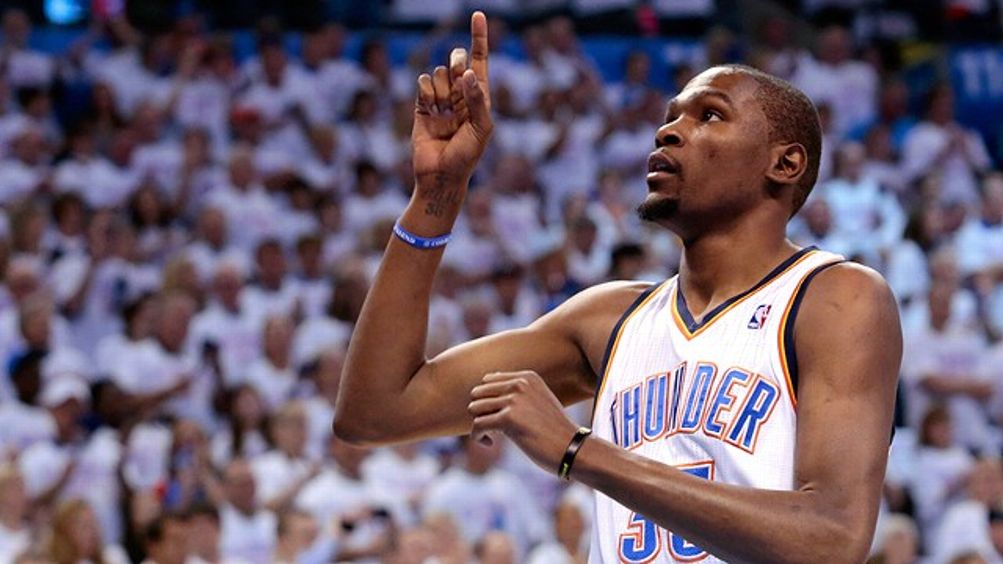 Before the start of the Spurs-Thunder series, Kevin Durant was the second-best player in the league. After scoring 18 points in the fourth quarter of Game 4 and single-handedly holding off a Spurs surge — the same Spurs surge that had stolen Game 1 — there seemed to be a growing consensus that Durant had passed some sort of benchmark in his career. Last night, in Game 6, Durant led the Thunder back from a 15-point halftime deficit with a barrage of 3-point shots. Nobody else in the league — arguably, no one in the history of the league — can hit some of the shots that Durant hit last night. When he catches the ball at the top of the 3-point arc and rises to shoot, the other nine players look suspended in animation, watching as the greatest offensive talent in the world flicks the ball through the net. It was the sort of inimitable display that cements NBA legacies — Dirk Nowitzki did something similar last year on his way to a championship. Late in the fourth quarter, Reggie Miller noted that what we were witnessing was the growth and ascendance of a great player. Durant, according to Reggie, had leaped the leap.

Greatness in the NBA tends to be episodic rather than accumulative. Unlike baseball, which has strict, numeric thresholds that guarantee entry into the only important Hall of Fame, a basketball player’s legacy is speculative and subject to much more volatility. A role player who hits a key 3-pointer at the end of a particularly memorable playoff game takes up more space in the public memory than an All-Star who ground out a productive career. I’m pretty sure John Paxson is more of a household name than Shareef Abdur-Rahim. This sort of instant-capture greatness happens in other sports — Bucky Dent and Dwight Clark both come to mind — but the randomness of baseball and football makes those moments feel more like accidents of fate. In basketball, a player verging on greatness is expected to have great moments in the postseason. The difference between Karl Malone and, say, Hakeem Olajuwon has nothing to do with total career points or playoff appearances, regular-season wins, or even the total number of championships they won. Instead, we differentiate between Karl Malone and Hakeem Olajuwon based almost entirely on whether or not they fulfilled our expectations.

Consider Chris Paul. By every statistical measure, Paul had a disappointing playoff run this season. The Clippers beat the Grizzlies in the first round and then bowed out, predictably, to the Spurs. Despite all the adulation that was justifiably poured upon Paul during the regular season and the expectations placed on the Clippers at the beginning of the year, the backlash against Paul and his teammates never came. Nobody questioned whether Chris Paul, who has never gotten out of the second round of the playoffs, possessed “what it took to be a champion.” Yet on three separate occasions down the stretch of close playoff games against the Grizzlies and the Spurs, Paul went full Kobe and dominated the ball, yielding disastrous results for his team.

And yet, nobody said anything, and if you asked any basketball fan to play word association with Chris Paul, the word “winner” would come up almost immediately. I am not saying that Chris Paul is a winner or a loser, or even a loser who has what it takes to become a winner. Or whatever. But I think the reason why people don’t ask questions about Chris Paul is because we expect less out of him than we expect out of LeBron James, Dwyane Wade, and now, Kevin Durant. Most hoops fans instinctively know that Chris Paul has reached his ceiling — he is the most skilled point guard in the league and plays with a visible, charismatic determination that makes him a joy to watch, especially in person. But nobody is asking him to carry the Clippers to victory in a playoff series against teams like the Thunder or the Spurs. And as long as he’s not breaking through, it doesn’t really matter if he played well or played poorly. He sits squarely within our expectations. If Chris Paul fails again next year to make it out of the second round, the blame will fall on Vinny Del Negro or on Donald Sterling, or even on Blake Griffin. Chris Paul is beyond reproach, not because he’s the perfect basketball player, but because he’s almost always playing exactly to expectation.

The importance placed on “leap games” or “iconic moments” reflects a desire for change in what can sometimes feel a bit repetitive. Paul Pierce, Kevin Garnett, Dwyane Wade, LeBron, Tim Duncan, Manu Ginobili, and Tony Parker have been a part of the NBA discussion for a combined century. Each one has had several “leaps” and regressions in his career. Each one has played the hero and played the heel. Only LeBron really has something at stake, and, strangely enough, nobody’s career exemplifies both the consistency of being great and the volatility of heavy expectations. LeBron’s first “leap” moment came almost five years ago, when he scored 29 of the Cavs’ last 30 points in a double-overtime playoff victory against the Detroit Pistons. If you judge a leap by the profile of the player, the impossibility of the task at hand, the stakes and the jaw-dropping skill and guts necessary to pull a team to victory, I don’t know if we’ll ever see another game like that. Like the young Mike Vick beating the Packers at Lambeau Field, it felt like the topography of a sport had permanently shifted. After 29 of the last 30, it seemed perfectly reasonable that LeBron would win eight championships. Now, we think of LeBron much differently. The Decision had its impact, sure, but I’m convinced that even if LeBron had gone back to Cleveland, he still would have been the NBA’s supervillain. Not because he’s a bit of a jerk or because of whatever reports came out about Maverick Carter and LeBron’s behavior on Team USA. LeBron became the league’s villain when we realized that he was “leap”-ed out and that not every great basketball player seized the “moment” like Michael Jordan. LeBron’s excellence, because it wasn’t volatile, bored us. It’s almost impossible to pull for something that feels preordained, especially if the face of the movement seems a bit too entitled, a bit too young, and a bit too threatening. LeBron’s haters root against him for the same reason Facebook haters root against Facebook stock.

Durant and his Thunder teammates are something different, not only because they play a dynamic style of basketball (although this does have a lot to do with it), but also because they still have a lot left to redeem. When all our hopes and projections clunk into place and cough up something like Durant’s performance in this year’s Western Conference finals, the joy almost feels proprietary — we feel like we’ve witnessed an important moment and want to load it up with heavy significance. I recall watching a young Paul Pierce score 32 points in the second half of a 2003 playoff game against the Pacers. I remember thinking back then that I had just witnessed the birth of a superstar. Nine years later, in Tuesday’s Game 5, I watched Pierce hit a 3 in LeBron’s face to seal an emotional and improbable playoff victory. Both these moments demanded a packaged narrative — inclusion into the canon of “Paul Pierce moments.” It wasn’t enough to simply think, Here is a great player who has probably been great since middle school doing something great.

I don’t really know why we need to see a player’s career in this quasi-religious way. Wasn’t this exactly what we expected out of Durant? Weren’t these expectations placed on him as early as his freshman year at Texas? Why must every iconic game come with its very own epiphany? Why does every game-winning shot (or miss) say something about a player’s character? It’s become somewhat chic to write all these moments off with some tweet or missive about “placing a narrative over a random series of events,” and I suppose there’s some truth to this very modern, mathematical dismissal — interpreting a basketball player through his greatest or worst moments will inevitably distort the body of his work. But this rational, stats-based outlook is relatively new to the discussion of basketball — one day in the very near future, someone will publish a paper that mathematically proves Karl Malone was better than Hakeem Olajuwon and everyone over the age of 35 will descend on that nerd’s house with pitchforks and Dream pendants.

The language of “moments” and “leaps,” of course, is zero-sum. Does anyone really believe that Kevin Durant thinks any differently of himself because he did what he’s done on several occasions this season? Miami cried last year when they “finally got past the Celtics.” Where are they now? But because most basketball fans are romantics, the narrative of the game keeps getting spun out along the same revelatory story lines. I suppose it’s just nicer to say that Michael Jordan’s greatness lay not in his statistical body of work, but more in what he did to Craig Ehlo, Bryon Russell, and the human influenza virus.

Sometime very soon, maybe only two weeks from today, Kevin Durant will leap the leap of the leap. All this, of course, is illusory movement — the creation of writers, bloggers, and fans who feel the need to fabricate new expectations and cast Durant into the NBA’s ongoing Oedipal narrative. His play throughout the Thunder’s postseason surge has been so consistently great that it has started to seem preordained. As such, to stave off boredom — and not heavy, lonely boredom, but rather the anxious, light boredom that makes us want to pin meaning onto patterns — we have laid down new obstacles for Durant to hurdle. But is there any better way to describe greatness in the NBA than that?