A Man Among Lions 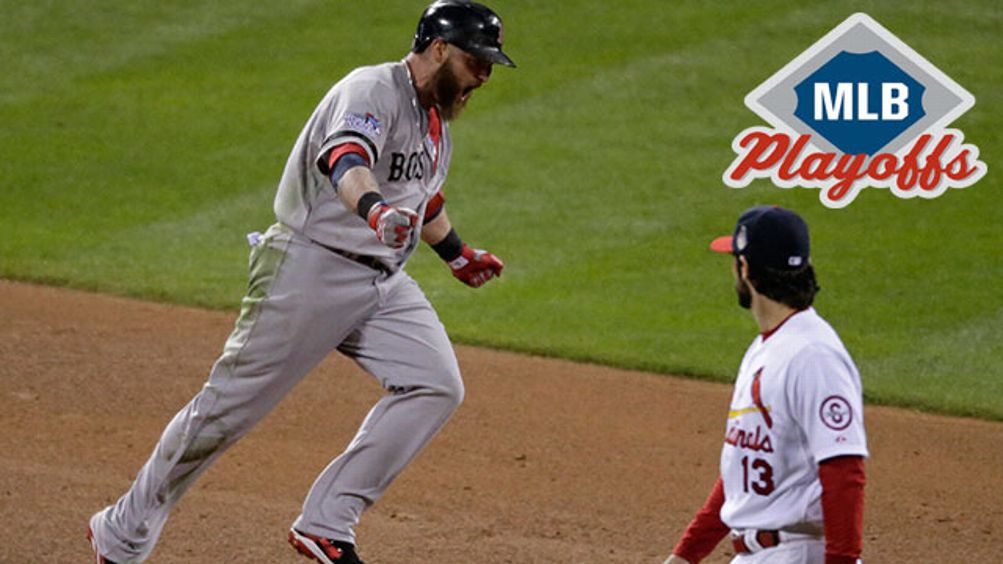 Grappling for a way to describe this wildly entertaining, utterly infuriating World Series, we turned to the greatest sports bar on earth, Twitter.

@jonahkeri So where do you draw the line between a great series or a comedy of errors?

The answer to this question is you don’t draw a line. This has been, unquestionably, a great series, an incredibly close one since Game 1 that’s now tied. It has also been, at times, terribly played, with the last two games ending on plays that were both painfully bad and nearly beyond the scope of human imagination. How else can you explain this:

What this series has reminded us is that in any one game anything can happen. Still, we have a responsibility to dig into the numbers and trends to see if we can forecast what might and what should go down from here, even if “The Stanford band runs onto the field” remains in play.

John Farrell’s bullpen usage will be terrifying/inspiring/stupefying/ entertaining/exhausting to watch.

We covered the Red Sox manager’s decision to let his best relief pitcher gather dust while Boston’s bullpen melted down in the seventh inning of Game 2. The same thing happened in the seventh inning of Game 3, with increasingly shaky lefty setup man Craig Breslow again starting the fire that led to a big inning for the Cardinals, while dominant closer Koji Uehara sat and watched. At this point, we can abandon any hope that Uehara is going to enter a game before the eighth inning, because neither Farrell nor any other current manager is going to do that. But with Breslow looking bad for a third straight game, Uehara reserved for the latest of the late innings, and Junichi Tazawa being used for mostly short stints, there’s an opening here for some improvisation.

That’s just what Farrell did in the eighth inning of Game 4 — improvised. Leading 4-2 in the eighth, the Sox skipper summoned none other than John Lackey to form the bridge to Uehara. As strange as using your probable Game 6 starter in relief might seem in the first place, this was also Lackey’s first relief appearance in more than nine years. Yet into the game he trotted, with no one even warming up behind him to start the inning. And the ploy worked. Lackey did put a runner on third with one out thanks to a throwing error by Xander Bogaerts and a wild pitch. But he then got Jon Jay to pop out and David Freese to ground out, ending the inning with no damage done. We tend to focus on process over results around these parts, so we’re not quite ready to yell, “Lackey scoreless inning!,” drop the mic, and run away. Still, as bizarre as this move looked, it wasn’t that far out there when you consider the particulars of the situation. Felix Doubront had already recorded eight outs, Breslow had faced two batters, failed, then left, and calling on Uehara to get six outs after pitching in a dicey (and game-losing) ninth the night before wasn’t a sure thing. You could’ve certainly justified using Tazawa for more than the final batter of the seventh. But Lackey had pitched well in his previous two starts, and this was his day to get in some tosses in the bullpen between starts anyway. By using him in that situation, you gave the rest of the bullpen a breather and brought in a quality pitcher in a bases-empty situation, knowing that if the shit truly hit the fan, Uehara was standing by.

It was a weird move, but also a defensible one. It also suggests we could see more pitching weirdness for the rest of the series, including Jake Peavy and Clay Buchholz both being available out of the pen for Game 6. And the upshot of all this is that …

… Felix Doubront, who made one start in the past seven weeks, could start Game 7 of the World Series (if necessary).

Doubront fared well for much of the season before fading away in September, posting a 9.77 ERA over four starts. There were legitimate questions about how much (or how little) the Sox might use him in the World Series, given that he last started on September 22, while throwing only 2⅓ low-leverage relief innings during the postseason. Several factors prompted Farrell to call on Doubront in both Games 3 and 4, though, in key situations to boot. First, Breslow’s sudden struggles, combined with Franklin Morales not looking like a viable option in anything approaching a big spot, suddenly left the Sox with no other alternative for left-handed pitchers than Game 1 starter Jon Lester. Second, Doubront ended up pitching well, prompting Farrell to ride him through 4⅔ innings over the weekend (he was charged with one run, but only after retiring eight straight batters Sunday night, allowing a rolling double to Shane Robinson, then having Breslow allow that inherited runner to score). Third, as we’ve noted before, Cardinals hitters were terrible this season against left-handed pitchers, ranking 26th in that department.

With Peavy lasting just four innings in his Game 3 start (and looking terrible in the ALCS against Detroit), there are question marks about his worthiness as a Game 7 starter if the series goes that long. Assuming the Sox don’t opt for Buchholz coming off a 66-pitch outing in Game 4 in which he was somewhat effective but also threw a diminished fastball while fighting injuries, that would leave Doubront as more or less the only choice for that potential final game. That late in the series, everyone except Lackey, the Game 6 starter, would be available. Still, the Cardinals’ fecklessness against lefties, and what we’ve seen so far in this series from Doubront, suggests the possibility for something better than two or three innings of chuck-and-duck.

The bottom of the Cardinals order has been even feebler than expected, and could remain a major problem.

At the start of the World Series, we gave the offensive edge to the Red Sox. This was largely because the bottom of the Cardinals order consisted of weak hitters like Jon Jay, David Freese (still a good hitter against lefties, but just a .257 hitter with a .353 slugging average this year vs. righties), and whichever member of the Pete Kozma–Daniel Descalso Shortstop Time-Share of Doom happened to be playing on a given day. Those four players have only dug a deeper hole for themselves since then. After the empty at-bats by Jay and Freese in the eighth inning of Game 4, those two hitters along with Kozma and Descalso have combined to go just 25-for-150 in the playoffs, a .167 batting average that includes only three extra-base hits.

To combat this problem, the Cardinals would normally be best served pinch hitting in big spots. Problem is, their bench is thin. For Game 5 in St. Louis, they will at least have Allen Craig available to sub in. The team’s second-best pinch-hitting option might be Kolten Wong, at least if his impressive minor league performance is more indicative of his skill than a few dozen at-bats with the Cards following his in-season promotion. Unfortunately we might not see Wong in any important pinch-hitting spots, not after Mike Matheny opted to use Wong for a seemingly meaningless pinch-running assignment rather than leverage his bat, with Wong getting picked off to end the game just to rub salt in the wound. That pickoff will be what people remember from the ninth inning of Game 4. But having a replacement-level hitter like Descalso lead off the ninth inning of a pivotal World Series game with his team down two runs underscores the team’s serious lack of hitting depth. This could be a major problem, especially when the series heads back to Boston and Craig gets reinserted into the lineup.

The Cardinals bullpen needs to stop conceding the sixth inning.

It’s one thing for both of these teams to balk at using their closers before the eighth inning — that we’ve seen Uehara and Trevor Rosenthal at least pitch in the eighth is more than we can say for multiple other managers and their own save specialists. But the notion that even setup innings require an immutable hierarchy is insanely, counterproductively rigid. And it has bitten the Cardinals in the ass in each of the past two games.

In the sixth inning of Game 3, Matheny tried to keep riding starter Joe Kelly, only to yank him after a leadoff walk and a Dustin Pedroia lineout. Lefty specialist Randy Choate entered the game to face David Ortiz, a reasonable move on paper that didn’t work because Ortiz has been eating planets in the World Series (he’s hitting .727 with a 2.114 OPS in the World Series — not typos). The next move, however, was clearly the wrong one. Matheny brought in righty Seth Maness, surmising that Maness’s high ground ball rate made him a good bet to induce an inning-ending double play. But it was far too cute a move, given that the next hitter, Daniel Nava, had smoked right-handed pitching in 2013 to that point and the Cards had several better relievers standing by (including Carlos Martinez, whose slider of death crushed Boston in Game 2, and lefty Kevin Siegrist, who would’ve negated Nava’s platoon edge). Instead, Maness allowed a game-tying single.

The sixth inning of Game 4 turned out far worse. Again, Matheny tried to press his luck with his starter only to pay the price. After retiring the first two batters in the sixth, Lance Lynn allowed a single to Pedroia. With Choate ready in the pen and Ortiz coming up … Matheny did nothing, instead leaving Lynn in to walk Ortiz on four pitches. With Jonny Gomes due up next, Matheny considered what happened the last time he put Maness in a big spot in the sixth inning … and elected to do the exact same thing. Maness wasn’t by any means the worst matchup in the world against Gomes. Still, the pairing was far from optimal, considering a ground ball offered no particular advantage with two outs; Gomes is a high-strikeout hitter who can be beaten with a big fastball, and Maness is the only right-handed reliever on the staff who doesn’t actually have much heat to offer. Martinez might be the team’s primary setup man, but part of a manager’s job is to recognize a high-leverage situation as it’s happening and adjust accordingly. Matheny failed to adjust, Martinez didn’t enter the game, and Maness threw an absolute meatball, a 90 mph middle-middle fastball that Gomes crushed for a game-winning three-run homer.

Again, this wasn’t the worst decision made in this series; it wasn’t even close, when one night earlier Farrell elected to let pitcher Brandon Workman take his first major league at-bat in the ninth inning of a tie game, only to yank Workman two batters into the bottom of the inning. But there’s a happy medium to be had between Farrell going off the reservation in the oddest ways possible and Matheny hewing to The Book as if his life depended on it.

In a series with two very good, somewhat flawed, evenly matched clubs, the team that makes the best decisions — and stops making errors every other play — could be the one to beat.