When We Need Our Barbarians 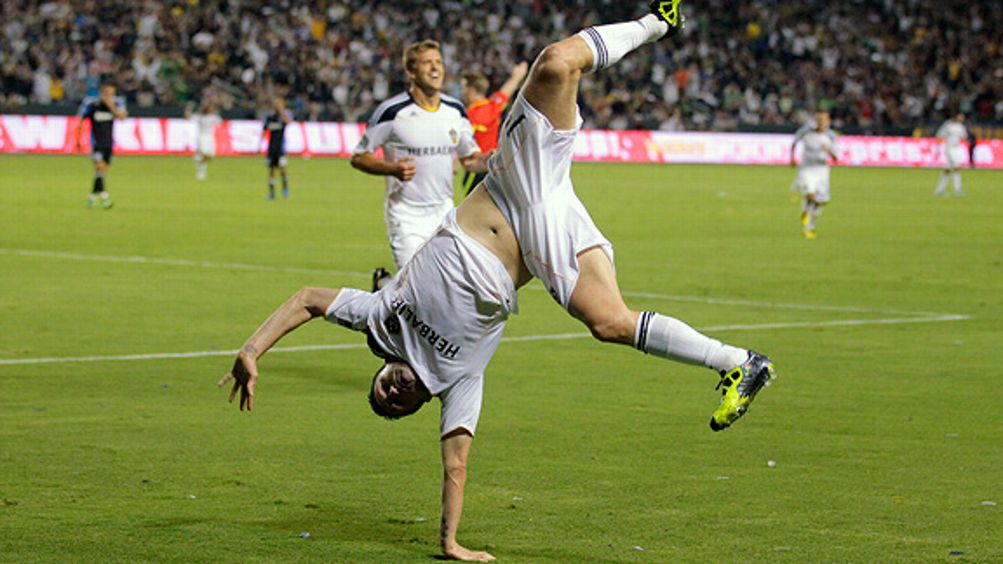 The Los Angeles Galaxy defeated the San Jose Earthquakes 2-0 on Saturday in the “California Clasico,” which is basically just a fancy name for a game between the Major League Soccer’s first two teams from California. The game marked the debut of the Irish International forward Robbie Keane, who was brought to Los Angeles to score goals. As promised, Keane delivered in the 21st minute off a dangerous pass from David Beckham. His ensuing celebration involved an old-man cartwheel and then some finger pistol shooting.

Like most marquee MLS signings who have experienced glory in top leagues and international competitions, Keane has lost a step. He isn’t quite at the point where he should be sent out to pasture, but when accomplished veterans start bouncing around like Keane has for the past few seasons, they need to figure out a way to extend the life of their brand. The American game, especially the big-market American game, can offer them a stable environment with a redefined set of objectives.

With the signing of Keane, the Galaxy have compiled the most premium talent in Major League Soccer. Keane’s arrival, despite its potential impact, stays in line with the franchise’s trends. The team has been searching for a winning designated philosophy since the inception of the Designated Player Rule, which continues to morph to give the Galaxy a competitive advantage over its smaller-market adversaries (allegedly). The rule was created in 2007 so that the Galaxy could sign David Beckham to a contract that went beyond a team’s salary cap. After several iterations, the rule currently allows teams to sign three Designated Players with only a portion of the player contract counting against the salary cap.

MLS franchises evaluate potential Designated Players (DPs) based on two factors: their ability to generate interest in the team to a casual fan and their ability to alter the team’s results. In recent years, it seems like the objective of MLS teams is to build a branded identity that their home city can rally behind. Now that franchises are in a better position to control their own revenue in their own stadiums, they are still experimenting with player investment strategies. These decisions are usually regional: New York and Los Angeles probably feel more pressure to ‘make a splash’ with a marquee signing. In places like Portland and Seattle, team success can carry a brand.

This past January, the Galaxy signed Juan Pablo Ángel to be the functional third wheel of the Galaxy’s Donovan-Beckham attacking strike force. After 22 games Ángel had scored only three goals, not what you want out of a forward who is taking up your Designated Player spot. Just a few days ago, they unloaded him on Chivas USA just to make way for Keane’s arrival.

During his tenure with the New York Red Bulls, Ángel established himself as one of the top performing forwards in the league. His 2007 season was one of the best in league history, netting 19 goals in 26 games. After battling injuries in 2008 and 2009, he bounced back and led the Red Bulls to the Eastern Conference title in 2010. Despite the team’s success, the Red Bulls let him go, choosing instead to use their DP slots on the more marketable Thierry Henry and Rafa Marquez. Ángel’s ability to be a consistent goal-scoring threat still led the Galaxy to believe he would be a threat with service from Beckham and Donovan.

As Ángel’s replacement, Robbie Keane can bring an edge to a Galaxy franchise that is looking to avoid the annual postseason collapse. This year, the Galaxy finally have a season in which David Beckham isn’t on a personal world tour and Landon Donovan hasn’t been logging too many international duty miles. Beckham’s contract expires at the end of the season, and you can never really tell which way his ambitions will lead him. Similarly, Donovan is always rumored to be chasing redemption in a top-tier European League. Knowing that it could be the final opportunity to win critical acclaim for the Beckham era, the Galaxy front office had ambitious plans to build a juggernaut with three Designated Players.

Keane seems to represent some sort of middle ground in determining the right Designated Player. He can impact the game on the field because he has the right kind of finishing ability to be a scoring threat in the sometimes un-beautiful MLS game. He comes with international notoriety that a team can package and market appropriately. Although he doesn’t come with the notoriety of Beckham and Henry, I still think he can contribute more to a team than a Designated Player like Rafa Marquez or Omar Bravo (Sporting KC). Whenever a team signs a Mexican international, you sometimes feel like it is an overcompensatory move to generate fan interest in a particular ethnic group. As of now, I can’t tell if the idea of Robbie Keane doing appearances at Irish Pubs in Carson would be gimmicky or ‘good marketing.’

In any sport, introducing a Designated Player who is making way more than everyone else can introduce team chemistry problems if the player doesn’t prove his value on the pitch. It’s also a complete culture shock to the “famous” international players who are stuck staying in a Hampton Inn in New Jersey with a somewhat random group of teammates. MLS is a young league, and some of the player contract figures are so low that they would make you encourage them to stop playing professional soccer and instead launch a career as a content farmer for some premium website company.

Realistically, the Designated Player himself ends up being the odd man out. He is used to the five-star life of top European Leagues, recognized as a celebrity and savior. The opportunity to scale back the inconveniences of fame does seem to add to the appeal of MLS, but it doesn’t always change the Designated Player’s perception of the world. Can David Beckham unlearn the tendencies of being one of the most rich and famous soccer players ever just to ‘be a good teammate’ to some guy making $33k a year? One of the most dramatic moments of Grant Wahl’s book The Beckham Experiment documented the drama that unfolded when Beckham didn’t pick up the check after an expensive meal. At the time, it seemed like Beckham was unaware of the disparity between his salary and the salaries of the majority of his teammates.

Fans, bloggers, and MLS general managers are all trying to figure out what type of return on investment they should get when they sign a designated player. The Galaxy hope that Keane brings a little bit of everything — headlines, ticket sales, goals, wins, and championships. So far, balanced teams with a mix of peaking young talent and well-informed foreign scouting have trumped any move to gain a competitive advantage by breaking the bank on one or two famous players. If Robbie Keane can continue to score goals, he will certainly impact the way teams have to defend against the Galaxy. With a reliable striker in the final third, the Galaxy should finally be the unstoppable force that they have been attempting to purchase for years. On the other hand, if he doesn’t help to save the Beckham era, Keane could become the latest face of misguided MLS front-office decisions.

Previously from Carles:
Does the Cover of Rolling Stone Mean Anything Anymore?
Spotify and the Search for Meaning in Music
How Entourage inspires a generation of young men
Will We Ever Feel Comfortable With the Coach’s Son?
The Lessons of Friday Night Lights