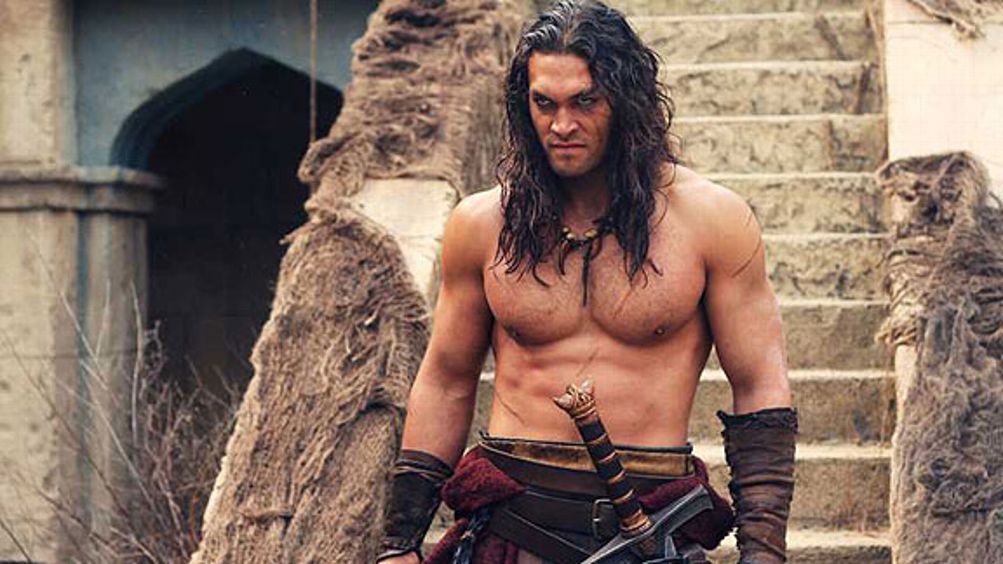 The most famous photograph of Robert E. Howard shows him looming like a gangster: suspicious eyes under a white fedora, tough mouth over a sharp suit. It’s a face that belongs on the cover of a crime pulp — maybe Black Mask, in which Dashiell Hammett serialized The Maltese Falcon in 1929, or Spicy Detective, which launched in the year the photo was taken, 1934.1 You look at the picture and think of cops, mobsters, speakeasies, tommy guns, and gang molls. It’s startling to realize that Howard, who was one of the greatest pulp writers of his era, did his best work for the fantasy-horrory Weird Tales, in which he published 17 stories about his most enduring creation, Conan the Barbarian, between 1932 and 1936.

But then Conan was always a sort of American jumble. Howard spent his whole life in West Texas, most of it in a tiny oil-boom outpost called Cross Plains, and he forged his hero’s character by combining “various prize-fighters, bootleggers, oil field bullies, gamblers and honest workmen I had come in contact with.” Conan’s birthplace, the shadowy land of Cimmeria, was suggested by the Texas landscape. Howard populated the rest of his Hyborian Age not with European history and folklore — the airbrushed post-Tolkien world of castles and elves and dragons — but with weird shards from his own peculiar obsessions. He mixed Southern tall tales with occult legends, Greek myths, ancient empires, Cossacks, cowboys, Indians, and Huns. Even in the mongrel world of the pulps, this was something else — the fantasy kingdom as 12th century melting pot.

Given these singular origins, it’s a little remarkable that Howard’s grim-visaged, bronze-muscled barbarian has proved so lastingly popular. Conan has spawned — in addition to the new movie, out today in 3-D2 — cartoons (Conan the Adventurer, Conan and the Young Warriors), comic books (including the classic Savage Sword of Conan, which ran for 235 issues starting in 1974), TV series, fiction by writers ranging from Poul Anderson to Robert Jordan, at least seven video games (including the massively multiplayer Age of Conan, which bills itself as “the sexiest and most savage MMO in the world”), and, of course, the two 1980s blockbusters that launched the career of Arnold Schwarzenegger and made a generation of suburban kids dream about crushing their enemies, seeing them driven before them, and hearing the lamentations of their women (whatever those sounded like).

As with Sherlock Holmes, Batman, and James Bond, every generation seems to get the Conan it wants. The question is why we want Conan at all. Howard’s stories, written at the jolting speed of most pulp fiction, lack the deep-focus world-building of The Lord of the Rings, the poised cynicism of Michael Moorcock’s Elric saga, and even the complex recurring cast of A Song of Ice and Fire.3 So what is it about this moody, shirt-optional relic of Depression-era fantasy that makes us keep the franchise fires burning?

The Tower of the Elephant” (1933), which was the third Conan story Howard published in Weird Tales, is set in Arenjun, the “city of thieves” in the exotic, gypsy-like kingdom of Zamora. The young Conan goes to the tower of the sadistic sorcerer Yara to steal the Heart of the Elephant, a magic gem that sustains Yara’s power. After sneaking into the tower, an adventure that includes poisoning multiple lions, Conan encounters a terrifying creature: a blind, chained prisoner with the head of an elephant and limbs ruined by torture. The broken thing explains to Conan that he belonged to a group of aliens that settled on the earth millennia ago; now he has been tricked by Yara into giving up his power. At the creature’s request, Conan kills him, cuts out his heart, bathes the magic jewel in his blood, and uses the jewel to trap Yara. As the barbarian walks away at the end of the story, the tower shatters and collapses to the ground behind him.

There’s an awesomeness quotient here that accounts for a part of the story’s success.4 But what’s really striking is how grim “The Tower of the Elephant” is. In sharp contrast to most heroic fantasy, there’s no overriding moral order, no dichotomy of good vs. evil, no trustworthy authority that makes everything make sense. Yara is evil, but Conan is a thief, and the elephant creature is simply unfathomable. The world — and this is common to all the Conan stories — is essentially an anarchy of situations; what happens just happens, with no final judgment or possibility of redemption. You climb a tower, you discover a gruesomely tortured elephant-headed alien, you cut its heart out. Maybe you decide to get revenge on its behalf. On to the next adventure.

What’s the appeal of all this? The Lord of the Rings was the perfect fantasy for WWII-era Europe, the story of an external evil defeated by a courageous alliance. The Conan stories address a more insidious threat, the decay of civilization from within. Science fiction and the western took opposite tacks to create frontier adventures for a world with no more frontiers; Howard created a sort of nightmare inversion of both, a world in which the ragged edge of civilization is always rolling backward. “Barbarism is the natural state of mankind,” he wrote in the Conan story “Beyond the Black River.” “Civilization is unnatural. … And barbarism must always ultimately triumph.” It wasn’t a cheerful form of escapism — Howard killed himself with a gunshot to the head in 1936, when he was 30 years old — but it was weirdly suited to a Depression America whose guiding institutions were widely perceived to have failed.

The world — and this is common to all the Conan stories — is essentially an anarchy of situations; what happens just happens, with no final judgment or possibility of redemption.

What’s more, it was an easily updatable vision. You can see this in the construction of Conan the Barbarian, the first of the Schwarzenegger Conans, which was released in 1982. An early draft of the screenplay was by Oliver Stone, whose nose for American collapse was already unerringly strong.5 The director, John Milius, was also the screenwriter who had penned both “Go ahead, make my day” and “I love the smell of napalm in the morning.” His post-Vietnam, Cold War-ready Conan battles flower-waving hippies and drone-like cultists, a solo Republican wreaking havoc in a world where the socialists have won. “Feels like a sequel to Red Dawn,” I jotted in my notes when I rewatched the film recently. Later I realized that Red Dawn was Milius’ next movie.

We can take this further. Milius was the Coen Brothers’ inspiration for Walter Sobchak, and Conan is clearly the epic Walter would have made if he’d been given $50 million. That’s not just because half the dialogue could fit in The Big Lebowski — “a couple of years ago they were just another snake cult” — or because, at one point, Schwarzenegger punches a camel in the face. It’s also because, like Walter, the film is confused and alienated by the direction of American culture and has nothing to fall back on but the bogus dream of a warrior ethic, a hyper-Nietzschean cartoon of actualization through violence.6 Walter throws a bowling ball at a nihilist; Conan chops off James Earl Jones’ head.

The Conan franchise didn’t succeed in spite of its tie to Depression-era Texas. It succeeded because of it. Its beginnings in Howard’s tough, weird environment let it build, and then continually renovate, an awesome story around a strain of American neurosis — the idea that civil society is about to collapse, and then it’s just you and the road and your sword. That’s a fantasy that tends to spring up in hard times, obviously, when cultural decline is combined with a suspicion of collective action. It’s probably unrealistic to hope that the new Conan will justify itself in terms of the debt-ceiling deal. But either way, Howard’s sullen killing machine, with his “gigantic melancholies and gigantic mirth,” will keep winding his bizarre path through American history. Case in point: President Barack Obama collects the comic books.

Previously from Brian Phillips:
Corruption, Murder, and the Beautiful Game: On FIFA’s scandalous history
On the Border: A look at the soccer rivalry between the United States and Mexico
Brian Phillips on Roger Federer, Novak Djokovic, Pete Sampras and the dead kings of Wimbledon
The long autumn of Roger Federer