Welcome to the Elaborate Chat 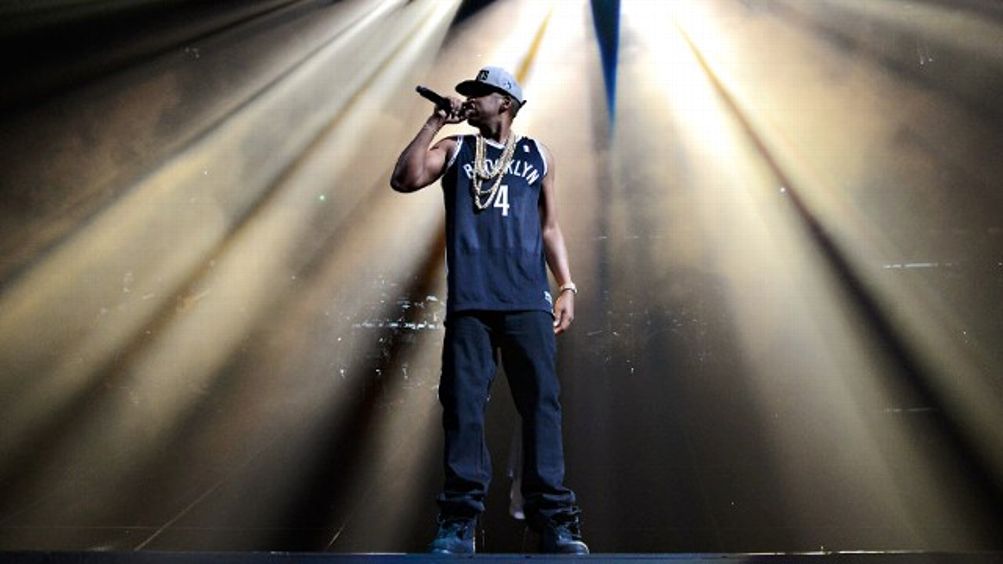 It took me about 12 minutes to walk to the Barclays Center on Friday night, and if you have any grasp of Brooklyn real estate, that gives you a decent sense of where I live. If you don’t, then suffice it to say that the neighborhoods immediately proximate to the intersection of Atlantic and Flatbush Avenues have changed considerably since the days when the Brooklyn Dodgers wanted to build a stadium here or the days when Jay-Z maintained a stash house a few blocks away, or even the days when a downtown Brooklyn arena was a proposal being debated rather than a real behemoth of steel and glass. A place is only worth romanticizing insofar as it changes. Or maybe you’re the one who changes.

There’s something exhausting about Jay-Z’s ascension over these past few years — it’s the constant readjustment of expectations, the mind-stretching exercise of thinking about the canyon between him and everyone else, the sense that our judgment no longer matters, if it ever did. “From Marcy to Madison Square” to Radio City to Yankee Stadium to “Made in America,” from the Hard Knock Life tour to Watch the Throne, from a United Nations–supported world tour to Glastonbury and Coachella: There’s no real precedent for a rapper playing these various stages and somehow maintaining a vague power within the corporate world as well. Everyone knows that the minuscule stake he holds in the Nets hardly makes him an “owner,” and a cynic might point out that his image has been leveraged to make someone else money. But there was nonetheless something special about the Barclays concerts. How often does a rapper open an arena with eight largely guest-free, sold-out shows? Forget the lyrics; when was the last time a man who looked like Jay-Z was worth leveraging in that way?

It’s a special power to be able to collect such a motley group of people together on a Friday night, to make them all, men in suits and stickup kids alike, shuffle happily through the same metal detectors and speak of “going hard” in their respective fields. We were all there to see the same thing and to be able to say we saw it first. After a big-tent DJ set from Mister Cee, the house lights finally went down at around 9:30. Roy Ayers’s “We Live in Brooklyn, Baby” played as scenes from the past 200 years of the borough’s history projected across the stage. Ayers morphed into the Beastie Boys’ “No Sleep Till Brooklyn,” which gave way to Ol’ Dirty Bastard’s “Brooklyn Zoo,” and then a familiar silhouette appeared. He cleared his throat, stepped into the light, declared the night a celebration, and shouted that we were all from Brooklyn on this night. The stage seemed to explode three times and he launched into a desperately focused version of “Where I’m From,” thousands of fans rapping the words back to him in unison.

Listening to Jay-Z rap for two hours is a reminder of just how long he’s been around. Long enough to sound great over DJ Premier, Ski, Timbaland, the Neptunes, Just Blaze, and Kanye West. Long enough to weather trends and pick the right allegiances, to go from jerseys to button-ups back to jerseys, to initiate new sidekicks and then lose them along the way. Listening to 18,000 people rap along to Jay-Z for two hours — you will hear the cameraman in almost every YouTube clip from that night — is a reminder of how important he has become to so many people’s sense of possibility and how that long career has become a text you study and try to learn from. Most of us in the arena could soundtrack a half to a third of our lives to various iterations of Jay-Z. It’s probably inevitable that his ascension to American-icon status has coincided with some of the least interesting albums of his career, but Friday’s set had a nostalgic, retrospective feel. “I got a million of these,” he would joke, interspersing hits with darker moments like “Murda Murda” and patient renditions of cuts from Reasonable Doubt. There was a feeling that he was merely doing songs that he wanted to hear, rapping the verses of late friends who’d had an impact on him — Biggie’s “Kick in the Door” and “Juicy,” Pimp C’s lines on “Big Pimpin’.” “I’ve been on many stages, been around the world,” he remarked. “Nothing feels like tonight.” He kept repeating that — “Nothing feels like tonight feels” — and the words gave the night a soft, intimate energy.

He pointed toward one corner of the arena and explained that he grew up “15 minutes that way.” Later, he spoke of the “spot on State Street, which is right over there,” pointing beyond the stage. He would frequently stand there and just stare out into the arena, not in a cool, impassive way, but in the way your eyes might linger when regarding someone special or letting your thoughts drift. His mood would veer from fiery to all-at-once overwhelmed; he never seemed above the occasion, even if his triumphalism was muted. It was like watching someone have a series of moments, ones they didn’t necessarily need you there to witness. You just happened to be in the same room.

When Jay tells us we are all from Brooklyn, it’s as much for him as it is for us. He coaxed someone in the front row to lend him his Jackie Robinson jersey, and he held it up to remind us how far we had all come since the days of way back. During the extended, almost downcast outro to “Encore,” he waxed on about how each one of us possessed some “genius-level talent” that we needed to discover. The winner has to universalize the rags-to-riches story, otherwise the victory might seem cruel and undeserved. If any one of us can do it — if we are all versions of the same story — then, as Jay reminds us on “Empire State of Mind,” some of us will make it, some of us won’t, and that’s just the way it is. But we want the winner to recognize that it cuts both ways — sometimes your success might be used to shame those who couldn’t make it and sometimes it can feel like gloating. 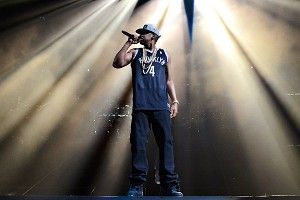 Which is why Jay’s speechlessness on Friday night was so affecting. Unable to explain to us how he was feeling, Jay — usually so calm and collected — merely wanted us to feel it with him — the journey, the humility, the bygone excitement. During “Do It Again,” the night’s sole guest appeared. There was nothing to sell, just a desire to return to that feeling of being young and having one’s mind rewired. “I seen the same shit happen to Kane,” Jay rapped, turning away from center stage and bringing up Big Daddy Kane, a borough legend who dominated in the days before one could rap for millions. Kane did a three-song set with his dancers Scoob and Scrap, and Jay disappeared from the stage altogether, allowing them their own space. It wasn’t an act of charity but one of respect. You have to remember your history, he explained upon his return.

That’s why Friday night still moves me, even if I found myself daydreaming through long stretches of it. There were reasons to be cynical — for starters, the screens inside the arena welcoming fans to “the house that Bruce [Ratner, the arena’s controversial developer] built” seemed a tad self-serving and a reminder of the opaque deal-making necessary to get the arena built. It was a reminder that we were all there to celebrate different things. But in Jay’s moments of nostalgic semi-rambling, there seemed to be an earnest awe at the narrative of his life — a narrative that far surpassed whatever he was once capable of dreaming. However you feel about the particulars of his career and whatever choices he had to make to arrive here, it is an astonishing tale. On this night, Jay was like a symbol returning to Earth as a man. Having obtained the status of myth, he just wanted to be flesh and bones again. He was projecting old feelings against the present day, a playful cackle or an astounded “Shit … ” the only way to reconcile the disparity. “Where I’m From,” “Dead Presidents,” “Can I Live” — these are hopes and scars distilled to song, and to revisit them in the arena you had a hand, no matter how infinitesimal, in building: It’s hard not to marvel at the unlikeliness of it all and murmur something about the American Dream. There’s Jay’s immediate legacy, from the music to the industry to his participation with the Nets. And there’s that nebulous, symbolic effect we won’t understand for a lifetime. The kid who doesn’t bother parsing the distinction between “part-owner” and “owner” and believes it is all possible. The one who listens to “99 Problems” and grows curious about the law. The one who wonders what happened to Ratner’s plans for local housing and applies his or her “genius-level talent” to holding him accountable.

Last summer, I went to Jay’s old stash house, the one at 560 State Street that he immortalized on “Empire State of Mind.” There was an open house. One of the Realtors let us in downstairs, led us through the lobby up a wide staircase and into a quiet inner courtyard shared by the building’s residents. In here, it felt like Brooklyn — the intolerable traffic that begins around State and Flatbush, the arena, whatever was beyond these walls, everything — was elsewhere. It could have been any year and I couldn’t resist imagining what it was like for Jay to walk up these steps and into this courtyard at some point in the 1990s, feeling relief or a sense of accomplishment or maybe plotting a move to somewhere even nicer. Probably Manhattan. One of the empty units on offer had a view of the Barclays Center, which was just an outline of steel beams. I chatted with one of the Realtors, an overeager, excessively tanned man in his mid-40s. “You know this building is … ” and before I could finish he said yes, of course, how could he not know, he had actually been listening to that song over the weekend. For better or for worse, I knew he wasn’t lying.