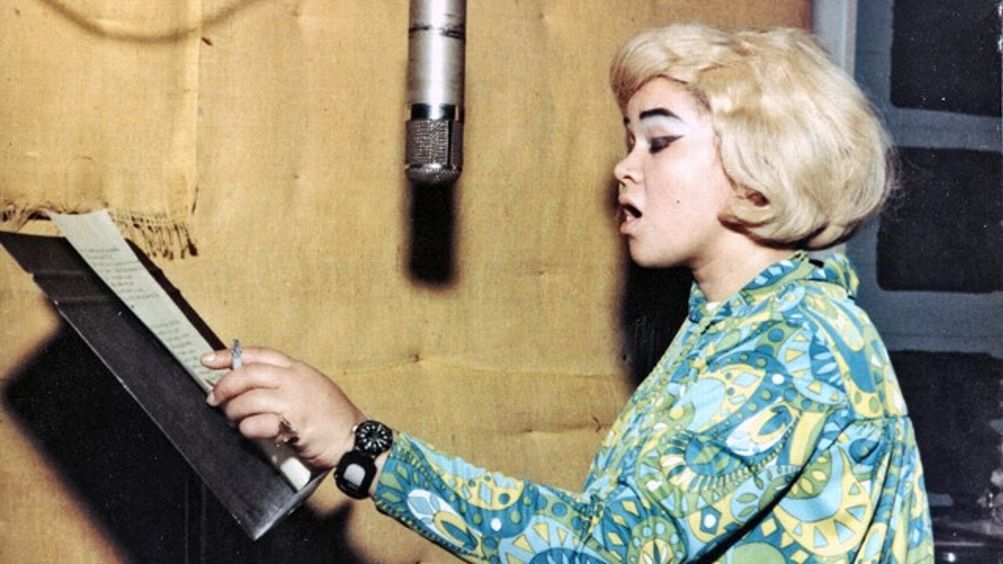 Etta James never sang an unwarranted note. The technical never trumped the demands of the moment; she knew, perhaps better than any other soul singer of her generation, when the song needed to be pushed out past its usual barriers and when it just needed to be sung. When Mariah Carey plugs her finger into her ear, closes her eyes, and goes on a run of super-high notes, the performance turns into a feat of human strength. Those high notes, while impressive, don’t tell you much about Mariah’s E-mo-tions or her fantasies. They, instead, exist as evidence of the potential of the human voice. With Etta James, every shocking grunt, every growl, every overflowing scream, and every sweet, almost sarcastically honeyed swing of low notes brought you deeper into those living rooms with cigarette ashes and empty glasses, closer to an intimidating, angry, yet thoroughly candid woman who only sang songs about herself. Hers was a dynamic, almost counterintuitive genius; the most flamboyant jazz singer of her generation was also the most nuanced.

There is no space in an Etta James song; the story, its heroes, and its villains are fully occupied by Etta James. Only the boldest of us who have heard “I Would Rather Go Blind” or “All I Could Do Was Cry” could place our little dramas at the center of those songs. But the measure of a great soul singer comes from her ability to present herself as the better version of ourselves, and, in turn, invite the listener into a better sort of drama. Following the announcement of James’ death this past Friday, her longtime friend Bonnie Raitt said, “[James] was able to dig so deep in kind of such a raw and unguarded place when she sang, and that’s the power of gospel and blues and rhythm and blues … I think that’s what appealed to people, aside from the fact that her personality on and off the stage was so huge and irrepressible. She was ribald and raunchy and dignified, classy and strong and vulnerable all at the same time, which is what us as women really relate to.”

It was a perfect eulogy, the totality of Etta James: the blonde hair, the cat-eye makeup, the deep voice, the wild hand motions, the stomping onstage, and the theatrics that provided a template for a more candid womanhood. It’s incorrect to say that James, in this respect, was ahead of her time. Her act is ahead of the present as well. (Who, in this age of Auto-Tuned singing robots, would be heir to her throne?) Perhaps, more than anything else, that’s the true mark of genius: Even when you’re dead and all your records have been relegated to nostalgia’s vaults, your music can still inspire hope for a better future.

In last week’s DivaWatch 2012, I mentioned that the Diva Committee operated under two pillars of faith. The first was love for Etta James. She was everything we felt an American singer should be: a rude, sexy, angry, conflicted woman who, when she sang, could make you forget all about your own bullshit. She also served as a foil for everything we hated about the current music landscape, namely Beyoncé. Readers of DivaWatch will hopefully realize that the Committee has nothing against Beyoncé personally. We even enjoy a couple of her songs. We more hate what Beyoncé represents: the idea that blandness, marketing, a deliberate lack of personality (for Beyoncé apologists who are getting riled up right now, ask yourselves what, really, do you know about your Queen?), and well-timed, impromptu dance moments in Targets can stand in for generations of soul, jazz, and R&B music. When Beyoncé sang “At Last” at Barack Obama’s presidential inauguration, I researched ways to take back my vote. They had just trotted out Aretha and her hat. Why not let Etta sing her own song at the inauguration? It felt as if we had woken from a dream to find that all our favorite singers had been replaced by pretty robots who made us angry, sure, but it also made us want to buy Neutrogena soap and Pepsi Max.

It’s impossible not to compare the two: Beyoncé played Etta James in 2008’s Cadillac Records and stole her song at the presidential election. When the outpouring of “celebrity grief” started up on Friday afternoon, Beyoncé, of course, was among the first to chime in. I don’t mean to question her sincerity (well, maybe a little … ), but it’s always struck me as particularly devious that she would choose Etta James as her idol. James was, in many ways, the opposite of Beyoncé. Ms. Knowles will never show you a shred of personality that isn’t manufactured and stripped clean. Etta James’ performances always stank of her problems and her personal triumphs. Beyoncé, like Diana Ross before her, is a vacuous icon; she puts nothing of herself into her songs, and, as a result, nobody feels threatened or alienated from her nonstop dance party. James, as mentioned before, put all of herself into her music. The fact that Beyoncé would recognize her own deficiency, and, as a fix, propose to play the role of Etta James in a movie should send shivers down the spine of anyone who read too much Foucault in college.

Thankfully, we have YouTube to remind us of the real Etta James. No Diva has ever benefited more from the video evidence, and in her honor, we have added a new category to the Diva Rankings: YouTube Frenzy, for the measure of time a newly indoctrinated fan will spend on YouTube searching through said Diva’s live performances. In that spirit, I’d like to hopefully set off a couple YouTube Frenzies with the following three clips.

With her death, we lose yet another reminder of the originality of American music, of how churches and bars can produce a talent that can embody both the best and worst in us. And in the most human way.