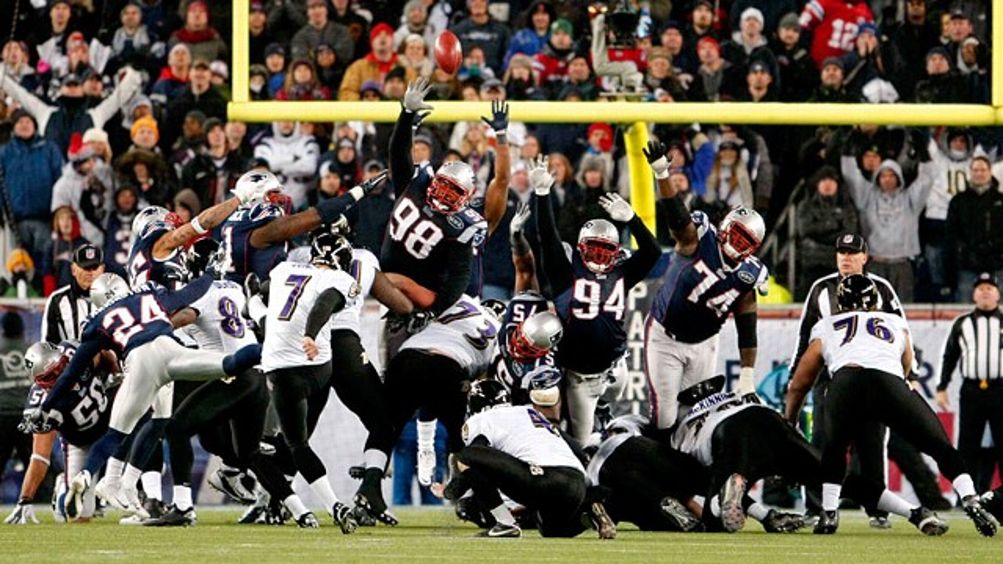 The lasting image — for me, anyway — after a thoroughly absurd football game ended in a thoroughly absurd fashion, was Vince Wilfork, the immense nose tackle of the New England Patriots, standing on the sidelines with his arms spread and steam rising off every part of his body, looking like some weird bald Druid whose ceremonies and invocations had convinced his personal deities to answer his peculiar prayers.

Or he looked like a swamp monster. It was a tough call.

Having lost His personal rooting interest in the playoffs last week, God has decided to cast His lot with the Patriots, just to screw around with the rest of us a little. (He does this kind of thing. This, I believe, also accounts for why there are mosquitoes and why Richard Nixon was elected twice. Your theology may vary.) Consider that, yesterday, the Patriots survived a terrible fumble by Danny Woodhead on a kickoff return, the worst interception Tom Brady has ever thrown — which led the quarterback to tell the nation during the postgame trophy disposal ceremony, “Well, I sucked pretty bad today” — and generally contributed all a team could possibly contribute to losing a game that it ended up winning, 23-20, because Baltimore Ravens placekicker Billy Cundiff picked exactly the wrong moment to scale Buckner Mountain. With 11 seconds left, Cundiff pushed a 32-yard field goal wide to the left and took a lot of somebodies off a lot of hooks. And gave Wilfork something for which to lift up his arms and look very much as though the cloud rising from his head and limbs might hoist the entirety of him aloft, which would make it a powerful cloud indeed. Was he stunned when the kick went wide?

“Yeah,” he said, and then spoke with surpassing gentleness about Cundiff. “That’s a lot of pressure, lot of pressure. Sixteen seconds left in the game, and you got a chance to tie the ballgame? That’s a tough kick. But, the one thing we always preach, we always want to do the right thing. We always go through certain situations. How many seconds? How many timeouts? Tonight, everybody had to be on their p’s and q’s, especially on that last kick.”

The Ravens outgained the Patriots, 398 yards to 330, including 116-96 on the ground. Joe Flacco outplayed Brady, whose 57.5 quarterback rating was the result of his having thrown two interceptions and no touchdown passes. (The last time Brady was shut out this way in any game was in a fluky situation at the end of 2009, when the Patriots had already clinched a playoff spot and Brady played one series before coming out. It hasn’t happened in the playoffs since his first year as a starter.) It wasn’t even a matter of New England’s being clearly better in crucial situations. The Ravens made a number of big plays, including a massive defensive stand to force a New England punt in the final two minutes of the game, the final play of which saw safety Ed Reed make a great stop against tight end Aaron Hernandez on a quick pass in the flat. The simple fact is that New England got the chance to make its crucial plays last.

After Baltimore got the ball back, the Ravens drove it all the way from their own 21-yard line to the New England 14, which is about when the Druids took over. Flacco put one between the 8 and the 3 on Lee Evans’ jersey just past the right pylon, only to have New England’s Sterling Moore pester Evans into dropping the ball. (“Everybody who was a Ravens fan was celebrating,” Ray Lewis said later.) On the next play, Moore got a whopping — if largely surreptitious — handful of Dennis Pitta’s jersey to force another incompletion. This brought out Cundiff for the moment that will keep him from watching SportsCenter for the rest of this century.

“You’ve seen a classic of two football teams that didn’t want to budge,” Wilfork said. “Every yard was tough. That’s what you saw tonight.”

The whole game seemed played in the middle, the place where Wilfork has become a strange hybrid of dancer and nightclub bouncer. He runs at 6-foot-2 and 325, and his job is to take up space in the middle and, if need be, move with two or three delicate steps in one direction or another to take up space somewhere else. Yesterday, he took up all the space there was around him. In the first quarter, on two consecutive series, Wilfork broke down the pocket, forcing Flacco to run into a sack, and then completely blew up Ravens guard Marshal Yanda to haul down Flacco himself. On another occasion, he knocked Michael (The Blind Side) Oher all the way back to hardcover, sending the Baltimore tackle sprawling Bullock-over-teakettle right on top of his center.

“We spun the front a couple of times,” says New England linebacker Jerod Mayo. “Vince did a great job as far as run-pass keys. Not only is he a physical specimen, but he’s a smart guy.”

It has been a remarkable year for Wilfork, who is as far from the stereotypical grunt-and-fall-on-the-dude space-eater as you can find. In the first place, he has as many interceptions — two — as any New England defender except cornerback Kyle Arrington, and he averaged 23.5 yards per return on his picks. He also scored the first touchdown of his career in December. More basically, he has become a master of the minute calculations necessary to move himself from one tight space into another while, all around him, planets are colliding.

This talent was splendidly illustrated by one moment in the fourth quarter, when the Patriots were clinging to the sliverish margin by which they ultimately would win. It was a few minutes after Joe Flacco finally had The Joe Flacco Moment, throwing an interception to New England’s Brandon Spikes. On the very next play, Tom Brady had The Joe Flacco Moment, chucking the ball deep down the middle of the field into double coverage in the general direction of wideout Matthew Slater, who had caught one fewer passes from anybody since training camp than Vince Wilfork had. Safety Bernard Pollard deftly tipped the ball to cornerback Jimmy Smith, who brought the ball back 39 yards to set his team up in fine field position. The Ravens thereupon drove the ball all the way to the New England 30-yard line, where they faced a third-and-3 with 3:36 left on the clock. When Baltimore lined up in the shotgun, Wilfork noticed that they’d left him completely uncovered.

“I think, to be honest with you, they just turned me loose,” Wilfork recalled. In fact, he thought the Ravens were setting him up. “I thought to myself, Well, if this is a setup block, you got me.” Instead, Ray Rice ran straight into him and Wilfork dumped him back three yards. This pretty much wrecked the series, forcing Baltimore to try a futile pass on fourth down rather than risk a long field goal. It also bailed Brady out from his god-awful interception.

“I don’t think it’s really set in yet,” he mused. “Just to see all the excitement from all the guys — the first-year guys, the second-year guys, guys that have never been in this situation. Just to see those guys excited brings back a lot of memories. It didn’t really dawn on me in ’04 because here I am, a rookie. When I got there as a rookie, I said, ‘I could do this all the time. This is easy.’ Years passed, and ’07 came, and we lost, and you think, ‘Whoa, this thing is serious.’

“Like I’ve said, I’ve been on both teams, a win and a loss, and I hate losing. You have to cherish this moment.”

In a whirlpool of chaos, he was one of the few rocks on the field yesterday and, in the end, it worked out just the way he wanted it to work out, just the way they Druid up.

Yeah, I shanked that one pretty badly.