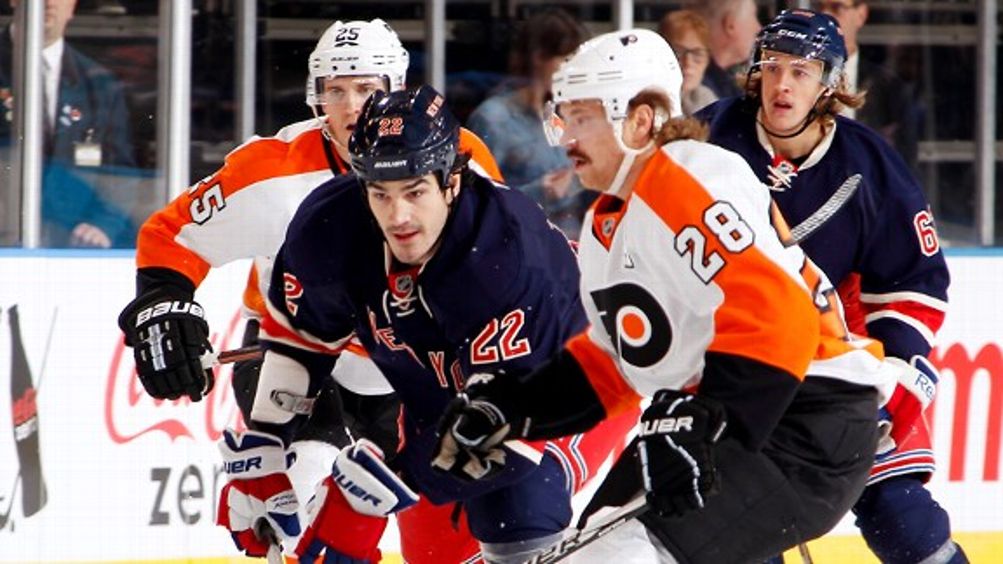 With its scientific-grade cinematography and celebrity voice-over, HBO’s four-episode hockey miniseries 24/7 Flyers/Rangers: Road to the Winter Classic has more in common with Planet Earth than it does with NHL On The Fly.

The show, which is narrated by Liev Schreiber and premiered Wednesday night, tracks the Rangers and Flyers through the month of December as if they’re migratory herds, using wry omniscience and slow-motion close-ups to observe and explain their behavior. And so we learn that Ryan Callahan has a feisty grandmother; that veteran Jaromir Jagr showers young Claude Giroux with so much praise that Giroux is stumped on what to say back; that Brandon Dubinsky is arguably rocking a “Hitler youth” look; and that Scott Hartnell still thinks Matt Cooke is the dirtiest player in hockey.

The first episode contained something for everyone. For Flyers fans, there was Wayne Simmonds calling Philadelphia “a way better hockey town” than L.A., and coach Peter Laviolette aptly describing his guys as “a fuckin’ giddy-up-and-go type team.” For New Yorkers, there was the ho-hum sight of children filing into a party bus rented from “Exotic Limousines” and the more pulse-quickening footage of Rangers taking taxis and subways to their games. Hey, that’s my line!

For connoisseurs of the curse, who were treated well in Season 1, the F-bombs flew again: “43 in English,”by Greg Wyshynski’s count. The mics caught plenty of on-ice negotiations, too,1 in various permutations of officials, players, and coaches.

And for anyone with a sense of whimsy and/or a soul there was Flyers’ goaltender Ilya Bryzgalov.

“I’m very into the universe,” he explained from beneath a blond Dinner for Schmucks haircut. “Like, how is it created? Like, what is it?”

He cheerfully recounted the offseason reactions he got about signing with Philly, which included the phrases “going to hell” and “miserable market for a goalie.” Later, he weighed in on international relations. “China law,” he explained. “If you kill the tiger, and they find you, you’re dead. It’s over.” I’ve never heard foreign policy be so accurately and concisely summed up.

The real points of interest in 24/7 aren’t the obvious memes or silly quotes or contrived situations, but the small details that are drawn out from under the surface — like the Flyers’ victory song, or the Dennis the Menace grin shot by Sean Avery to Artem Anisimov, or the combination of I hope he’s all right worry and I hope without him my job’s all right concern written on the face of Laviolette when he first hears that his best player, Giroux, is out with a concussion.

That Giroux’s concussion was even mentioned in Wednesday night’s 24/7 was in itself impressive. One of the remarkable things about 24/7 is its super-last-minute deadline: The staff can change Wednesday night’s episode until up to 6:30 pm. that same evening, which allowed them to include the Giroux developments. But if this is a testament to the show’s nimble capabilities, it was also ultimately a sign of its restraint.

When Giroux’s status was changed from “whiplash” to “concussion,” he joined several other high-profile NHL players who are currently out with hockey’s latest new euphemism: “some symptoms.” Sidney Crosby had halted his comeback, no longer feeling 100 percent. Carolina’s Jeff Skinner and Joni Pitkanen were declared concussed in the same press release. The Ottawa Senators’ Milan Michalek ascended to become the NHL’s leading goal scorer and was promptly shut down with a concussion, joining his brother Zbynek, who was concussed in November. Both the Rangers and Flyers have significant players out with concussions, including Marc Staal and Chris Pronger.

But rather than use this as an opportunity to editorialize about fighting or head shots or helmets or use the phrase “concussion epidemic,” the 24/7 producers kept things simple and anthropological — the right move for this kind of show, which knows it can get across more by saying less.

Following last year’s popularity, there was worry that this year’s 24/7 might not live up to the hype, or that the Rangers would be uncooperative. John Tortorella called the cameras “a pain in the ass” (“I hope you don’t take that the wrong way,” he added), and found the filming more of a distraction than a distinction.

“You’ve got that fuckin’ mic on, and you can’t fuckin’ think straight,” he bellowed at Rangers forward Brian Boyle after a defensive misstep in the Rangers’ 4-2 loss to the Toronto Maple Leafs.

And yet Tortorella emerges as one of 24/7‘s more interesting characters himself. (The Boston accent gets ratcheted up to Kennedy levels.) And why would he not? After seeing the first episode, you realize that it’s almost impossible for this show not to be good. With this much wildlife, it’s pretty hard to go wrong.

The HBO series was not the only hockey documentary to premiere Wednesday night. Versus (18 days away from officially changing its name to NBC Sports Network) aired a 30-minute program leading into the Chicago Blackhawks-Minnesota Wild game called 36 Hours. Between that and 24/7, it’s getting increasingly difficult to scan the TV listings and know whether you’re signing up for a hockey documentary, a TLC drama about a birthing ward, or a Chris Tucker buddy comedy.

There’s no use comparing 24/7 and 36 Hours, because the former is a modern-day miracle of broadcasting and the latter is mostly just footage of Patrick Kane walking through hallways.2 Still, 36 Hours had its moments. Seeing Kane meet a fan who immediately told him he’d been great in fantasy snapped me to the sickening realization: Athletes must have to hear about the fantasy teams of strangers all day long. Think about how much that must suck. Also, just wait ’til I meet Bobby Ryan.

These 36 seconds of video, taken in yesterday’s overtime shootout between Chicago and Minnesota, will tell you more about Kane than the entire 36 Hours show.

Now that’s just silly. It had to be to upstage Jonathan Toews’ goal from earlier in that game.

Before the season began, it was fun to consider which of the three California teams had the most promise. It was a strong field. The San Jose Sharks were being widely projected to make the Cup finals.3 Anaheim was coming off a season in which its top line included the league’s scoring leader and MVP. The L.A. Kings’ offseason moves seemed like those of a team expecting to challenge deep into the playoffs.

Instead, with roughly a third of the season having elapsed (if this were a hockey game, we’d be winding up the first intermission right now), all three Golden State teams have been tarnished. Two of them have fired their coaches. None have won more than three games in their past 10 tries.

The quotes echoing up and down the Pacific Ocean all sound the same. “If I wouldn’t be frustrated with that, there would be something wrong with me,” said the Sharks’ Marty Havlat, referring to his inability to score an even-strength goal this season. “Make no mistake, they’re the ones who are accountable for this,” L.A. Kings GM Dean Lombardi told the media about his players after he fired coach Terry Murray. (To the players directly, he said “a lot of bleeped words.”) “I’ve cleaned my garage three or four times,” another recently canned coach, Anaheim’s Randy Carlyle, told Pierre LeBrun. “I helped my wife with the Christmas decorations. That’s my life right now.” Before he was fired two weeks ago and replaced with Bruce Boudreau,4 Carlyle had been the third-longest-serving coach in the league.

There is a varying level of hope for each team. With 33 points through Wednesday, the Sharks would, for all their woes, make the playoffs by a tiebreaker — and they’ve played as many as four fewer games than some teams. The Kings, who somehow managed to appear caught off guard by their own long-time-coming personnel decision, are close to naming a replacement coach.5 And the Ducks picked up their second win under Bruce Boudreau on Wednesday night. “This is the hardest I’ve seen a team work this year that I’ve been coaching, and that includes the Capitals,” he said. ” So it was fun to watch.” The win moved Anaheim one point out of last place in the league.

The Blackhawks’ Dave Bolland’s recent description of the Vancouver Canucks’ Henrik and Daniel Sedin as “sisters” who “sleep in, like, bunk beds” was unoriginal, the same old stuff.

Vancouver coach Alain Vigneault, however, went in an unexpected direction. “When you have comments like Bolland’s, he’s obviously an individual whose IQ is probably the size of a birdseed,” Vigneault said. “And he has a face that only a mother could look at. You’re talking about two players who play with integrity, they play the right way, that are great examples of everything this game stands for. Then you have a birdseed like that making comments. Lucky his mother loves him.”

There must have been some birdseed around8 … ’cause all I’m hearing … is chirps. YYYEAHHH!

Previously from Katie Baker:
Hockey’s Fighting ‘Problem’
The NHL Coaching Carousel Spins Off Its Axis
Broadway Blueshirts Are Becoming Must-See Theatre
Manning-ology, Lady Byng, and the Pitfalls of Great Free Tickets
The Best Team in the NHL
To comment on this story through Facebook, click here.