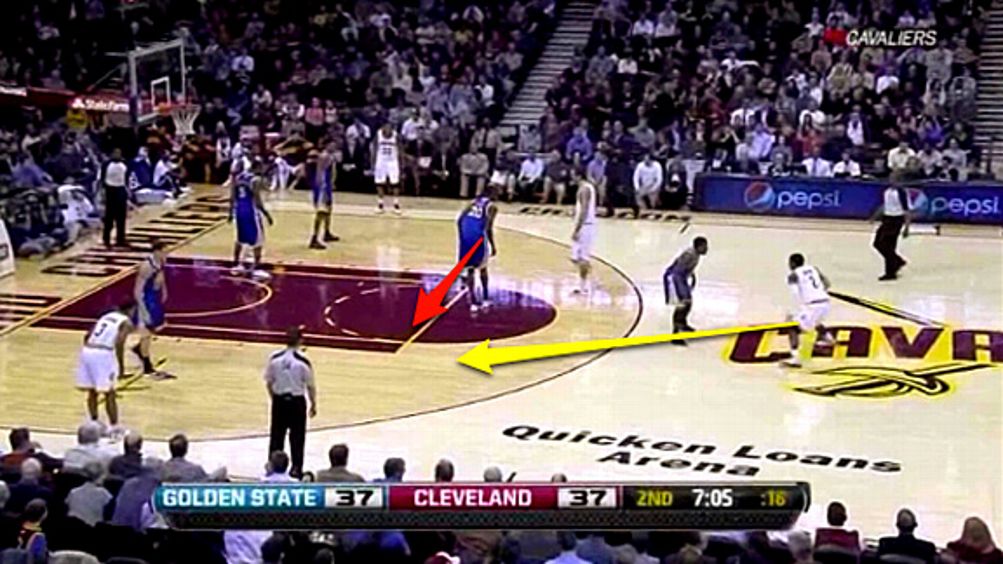 It’s hard to believe that the NBA season is only one month old, a fact that helps explain why these rankings remain so volatile. Rookies throughout the league are getting new opportunities, making the most of some and falling short on others. Two players have fallen out of the rankings and two new names have emerged. The fluctuation is also a result of inconsistent playing time. Some first-year players will get minutes for a stretch of four or five games and then spend the next bunch of games sitting on the bench. Let’s take a look at the list:

Irving is showing everyone why the Cleveland Cavaliers chose him with the first overall pick in last year’s draft. He has improved his pick-and-roll play and demonstrated an ability to break down defenders and create offense for himself and his teammates. In isolation situations, Irving produces 1.189 points per possession (this includes points he scores and those generated by assists). That puts Irving in the top 4 percent of NBA players. Irving scores most effectively from isolations at the top of the key. He knows it, too, and finds a way to begin 48 percent of his isolation possessions from that spot, according to Synergy Sports. On those plays, Irving drives to his left 58.3 percent of the time.

Irving has also shown an impressive ability to read defenses and find open teammates during his one-on-one possessions. So far in the season, when Irving has passed out of isolation situations, his teammates score 1.455 points per possession and shoot 70 percent. After he beats his man, Irving is seeing where the help defense comes from and making defenders pay for over-helping. 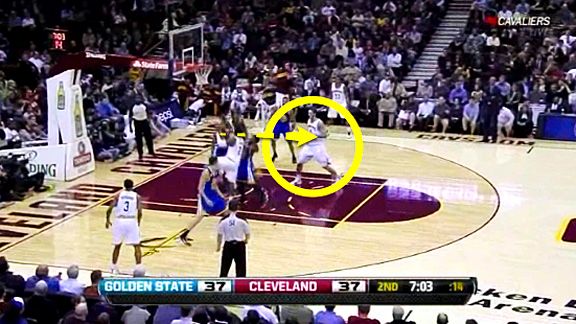 In this play, Irving breaks down his defender, drives left side, and attacks the rim. As this happens, Ekpe Udoh leaves his man to help on Irving’s dribble penetration. 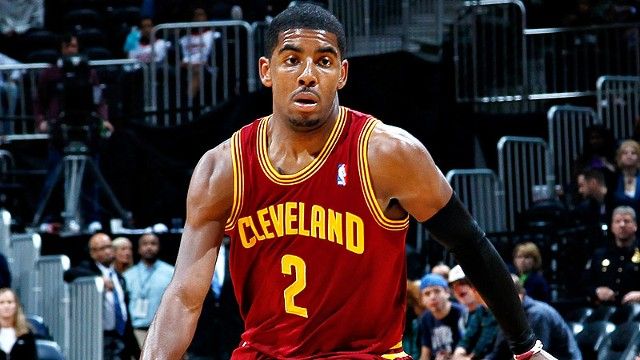 As Irving approaches the hoop, Golden State defenders collapse around him. Instead of forcing a low-percentage shot, Irving notices Udoh shading over and leaving Semih Erden wide open in the paint. Irving dishes to Erden, who converts an easy layup.

Rubio’s stranglehold on the no. 1 spot has finally been broken! Coming in second isn’t too deep of a decline, though, and turnovers are the cause of Rubio’s dip. He commits turnovers on 23.5 percent of his offensive possessions. In pick-and-roll situations, Rubio’s turnover rate isn’t much better. When he comes off ball screens, Rubio gives the ball away 20.4 percent of the time. It seems that Rubio’s biggest problem is the same trait that has made him such an impressive rookie — his confidence.

Rubio’s self-assuredness as a passer has wowed NBA fans throughout the first month of the season, but it also verges on overconfidence. He always seems willing to attempt the perfect pass, to thread the needle to a rolling big man even when the big is heavily defended. Sometimes, the pass gets through and Rubio looks great. On several other possessions, like those in the video, Rubio’s high-degree-of-difficulty passes lead to easy steals for the defense. Rubio’s cocksure passing is especially disturbing when he ignores an easier pass to an open teammate in favor of a more difficult play. He needs to apply his creativity more carefully and make simpler plays (when they’re available) to limit his turnovers and become a better point guard.

When looking at pure offensive ability and production, MarShon Brooks might be the best rookie in the NBA. That said, Brooks needs to do more on defense to become a truly effective player. According to Synergy Sports, Brooks gives up 0.925 points per possession on defense, placing him in the bottom quarter of NBA players. In particular, Brooks needs to become a better one-on-one defender against isolation plays.

It doesn’t appear that Brooks lacks the ability or technique to play tough defense. Instead, he’s been playing like he just doesn’t have the desire to work hard on defense. Against isolations, Brooks tends to not get into a low defensive position; rather than move his feet to stay in front of his man, Brooks has a habit of reaching in as his man starts to drive. Anyone who played a little bit of high school basketball can recognize this as classic “matador” defense. It wasn’t good enough for your JV coach, and it isn’t good enough in the NBA.

Brooks’ lazy defense is also apparent when he guards players who move well without the ball and use a lot of screens to get open. Brooks’ opponents are shooting 58.8 percent against him in these situations, and they score 1.235 points per possession. That makes Brooks one of the league’s worst defenders against off-ball screens.

In this video, Brooks’ inattentiveness on defense is apparent. While guarding Kemba Walker on a succession of screens away from the ball, Brooks fails to trail Walker through the screens. Instead, Brooks goes over the top of the screen and leaves Walker with plenty of space for an easy catch-and-shoot opportunity. This is poor defense, and Brooks has been doing it all season.

Brooks is good enough on offense to stick around near the top of these rankings all season long, but if he doesn’t improve his effort on defense, he won’t be able to challenge Irving and Rubio for Rookie of the Year honors.

We’ve already looked at Leuer’s ability to knock down jumpers as the “third man” in pick-and-roll plays. But that’s not all the Bucks’ surprising second-round draft pick can do. Leuer has also been a scoring threat in the post this season. When he posts up, Leuer scores 0.909 points per possession, which puts him in the top third of NBA players. Those numbers aren’t spectacular, but they’re good enough to be a second option after Leuer’s shooting ability. In fact, Leuer has been using the threat of his outside shot to set up his post game.

Leuer isn’t a power player one the block. He won’t back his defender down and hit a jump hook in the paint. Instead, he uses his shot, which is his best tool on offense. In the first clip, Leuer catches the ball with his back to the basket, waits for his teammate who made the entry pass to clear out, then converts a turnaround jumper. Since defenders are aware of the threat of Leuer’s shot, he uses it as a decoy to keep his defender guessing. In the second clip, Leuer receives the ball, faces up, and fakes a shot to freeze the defender. This creates enough space for Leuer to knock down an outside shot. As Leuer gains experience, that pump fake will help him beat his man and attack the rim, which will make him a more efficient offensive player.

Since last week, Shumpert’s play has become slightly more efficient, especially in transition. On the break, Shumpert’s PPP is now 1.297, which is among the top 20 percent of NBA players. He also shoots 63.3 percent on transition plays. Shumpert is so effective in the open floor because he gets to the free throw line on 12.2 percent of his fast-break possessions and earns a lot of easy points.

Shumpert doesn’t shy away from contact on the break. In fact, he seems to invite it. Shumpert is strong enough to get a shot up on the rim even when he’s fouled. Drawing fouls means more free throws, which means easy points and great efficiency. Shumpert still plays too much point guard, but his ability to get to the line has been impressive.

Morris’ post-up and spot-up skills have made him a useful offensive weapon for the Suns, but he needs to take better care of the ball. According to Synergy Sports, Morris has committed turnovers on 16.3 percent of his offensive possessions. Morris is especially careless in the post, where he turns the ball over 9.7 percent of the time. These turnovers represent a critical lost opportunity for the Suns considering how efficient a scorer Morris has been on the low block. When Morris posts up, he scores 1.065 points per possession. That’s in the top 13 percent of all NBA players. Essentially, this means that every time Morris loses the ball in the post, the Suns lose a point. Most of Morris’ turnovers occur when he is double-teamed. Many young big men struggle with double teams in the low post, and if Morris can learn to handle these defensive schemes he should be able to curtail his turnovers.

Yes, Knight has been turnover-prone in his first few weeks in the NBA, but these types of growing pains should be expected from a 20-year-old point guard. However, Knight’s shooting has been a pleasant surprise, especially in spot-up situations. Knight scores 1.00 point per possession as a spot-up shooter, which is in the top third of all NBA players. In catch-and-shoot situations where Knight takes a jump shot without dribbling, Knight’s numbers are even better: 1.273 points per possession, which puts Knight in the top 17 percent of NBA players. As Knight learns to limit his turnovers, he has a chance to become one of the most efficient rookies in this class.

Coming into the season, Burks was touted as a talented offensive player who struggled on defense. Burks’ offense has been average so far this season, but he earned his first ranking here because of his defense. According to Synergy Sports, Burks has been holding the players he guards to 0.717 points per possession. That places him in the top 16 percent of all NBA players. Burks is particularly adept at chasing defenders around screens away from the basketball. In these situations, Burks holds opponents to 0.583 points per possession on 33.3 percent shooting. He uses his speed and size to stick close to his man and challenge shots. It has been impressive to watch Burks commit himself on defense, especially after being criticized before the draft for a lack of effort defensively. If his offense picks up, Burks should become a mainstay in these rankings.

So far in his career, Leonard’s biggest attribute has been his ability to score without demanding the ball or requiring the Spurs to run plays for him. He gets his points in transition, by moving without the ball, and by collecting offensive rebounds. Those offensive boards don’t just add to Leonard’s points total, they also create extra possessions for the Spurs. Leonard is second among all NBA small forwards in offensive rebound rate, a statistic that measures the percentage of offensive rebounds a player grabs when he’s on the court. The key to Leonard’s rebounding is his ability to read the ball off the rim. He does this so well that he usually gets a step ahead of his defender when tracking a ball off the rim. Combine that with Leonard’s long arms, jumping ability, and quickness, and you’ve got a damn good offensive rebounder.

Thompson shot poorly to start the season, but he has finally become comfortable and started hitting shots for the Golden State Warriors. As of Sunday, Thompson has been converting 45.5 percent of his 3-point attempts with a true shooting percentage of 54.4. In spot-up situations, Thompson’s PPP of 1.389 on 54.5 percent shooting places him among the 97th percentile of all NBA players. When he catches and shoots without dribbling the ball, Thompson is literally the best shooter in the league. He scores 1.818 points per possession and shoots 63.6 percent on pure catch-and-shoots, better than any other player on an NBA roster.