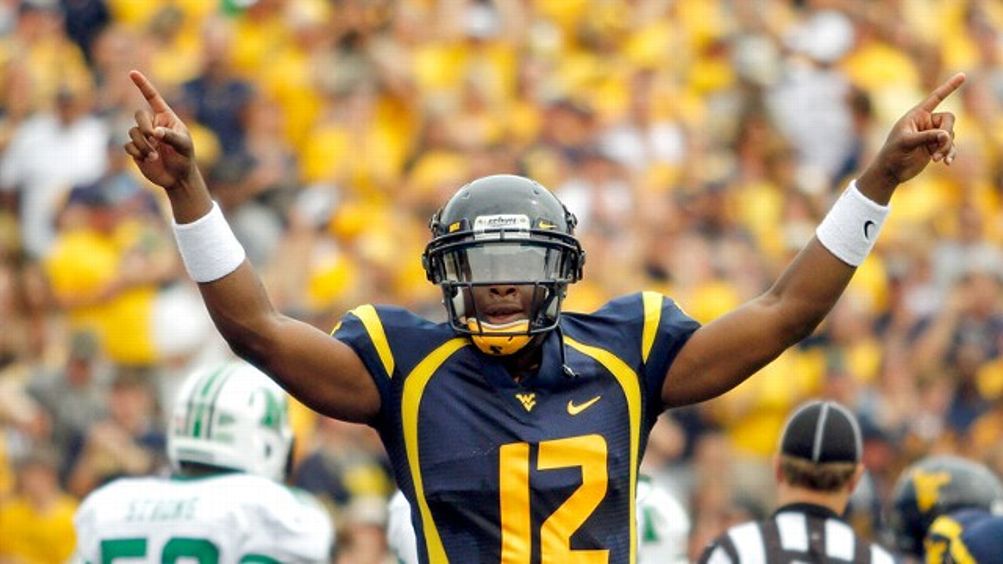 Remember the good old days, when a man would look you in the eye and ask for your phone number instead of shiftily suggesting you become Facebook acquaintances? Remember when you got asked out on proper dates instead of being texted the coordinates of a get-together? Well, brace yourself for a tall Mountaineer named Smith. Where he lives, the tried-and-true common-sense rules of dating apply, and so does a rule that you can’t burn a couch on your lawn. This statuesque signal-caller has simple tastes and a complicated offense, and he’ll be attending the Heisman presentation in your neck of the woods on December 8. That’s plenty of time to get your game straight. Sure, you won’t be the only gal on the lookout for this future pro, but you didn’t move to the Big Apple because you’re afraid of competition. This steely, smooth hombre holds the single-season passing record at West Virginia (4,385 yards), and when he makes a pass at you, you’ll know it. He was responsible for 33 touchdowns last season, another school record, and you can be sure he’ll declare his intentions loud and clear before he tries to cross your line of scrimmage. This English major may be a man of few words, but he’s up for plenty of action, as Clemson found out last year when Geno & Co. put up 70 points against them in the Orange Bowl. This coal-country beefcake is hard to sack, but sweetie, you’re steamier than any hot route and you’ve got the most overwhelming blitz in the city.

Texas at Oklahoma State — This is not a must-win for Texas in terms of their goals for the season — for one thing it’s Week 5, and for another thing Oklahoma fell last weekend — but it feels like a must-win in terms of proving that they’re back on track. It’s time to show that they’re once again a power in their conference. There’s nothing like playing Ole Miss to help you identify your playmakers, which is what Texas did two weeks ago. Last week the Longhorns were off, as were the Cowboys, so we should have two well-prepared teams.

Oklahoma State thought they had their quarterback of the future until Wes Lunt got hurt and J.W. Walsh came out firing. Coach Mike Gundy, who’s 45 (that’s still fun), is being as cagey as possible about whether Lunt will be healthy enough to play Saturday, and whether he would start, if healthy, but most folks’ money is on Walsh at this point. And if Walsh beats the Longhorns, the future may have to wait in Stillwater. Well, Lunt might have to wait because the future is now. OSU has a veteran squad and I don’t think the loss they suffered in Tucson did anything to convince Cowboy fans that they aren’t still as good as or better than any other Big 12 outfit. This would be a very disappointing loss for either side, which is what makes it a lovely tilt. If Texas loses, it’ll be interesting to see how coach Mack Brown holds up. There are already whispers among the brash and ungrateful of the congregation, and the meat of the schedule awaits. Hey, Texas quarterback David Ash apparently grew up without a television in his house. That has no bearing on the game.

Arkansas at Texas A&M — The Razorbacks: Yikes. Texas A&M can get the SEC newcomers off the schneid (A&M is 0-1, Mizzou is 0-2) and establish themselves in a superior position to Arkansas in the SEC West pecking order, a position that may stick with the kind of recruiting that’s going on in College Station and the fact that Tyler Wilson and a bunch of other key Arkansas players will depart Fayetteville after the season. I can watch any game at Kyle Field, but this one also offers seven-car pile-up rubbernecking. Just how far can Arkansas fall? A loss to UL-Monroe. A loss to Rutgers at home. Alabama eviscerated them, but there’s really no shame in that. I have to admit I have mixed feelings about Arkansas. It’s kind of boring and disingenuous and beside-the-point these days to demand character and honor from big-conference head football coaches. That said, Bobby Petrino is a special case. Even before his not-so-Easy Rider days, Petrino was single-handedly bringing back into utility outdated terms like rascal and scoundrel, taking secret meetings behind Tommy Tuberville’s back, absconding from Atlanta with nothing less than some scribbled notes left behind, and just generally widening his stance and pissing on any and all contracts within the sphere of his arching yellow stream. So, the fact that Arkansas participated in his sliminess by wooing and hiring him (a good football decision, because the guy can coach offense like nobody’s business), well, it kind of serves the athletic department and top boosters right to be laid low like this. On the other hand, I feel for the Arkansas players and I want them to have at least one great win — some measure of redemption. I want them to rally together in memorable fashion. They’ll have their chances this season, and Saturday at Kyle Field is one of them.

Ohio State at Michigan State — Well, I don’t know. I guess I want to see Urban Meyer’s squad play a real defense on the road, since Braxton Miller is getting Heisman talk and all. Make up your own additional reasons why this game is interesting. I can’t do everything.

Tennessee at Georgia — Two probabilities: (1) Tennessee will make some dazzling hay in the passing game, as always. (2) This game will be remembered as the tipping point for Derek Dooley keeping or losing his job. Tennessee doesn’t have to win, but they have to play to the wire. Dooley can’t afford another second-half fade like what happened against Florida. Where, exactly, Tennessee can find an SEC-caliber running game to complement its future professionals at receiver and quarterback, I know not. But find one they must. And turn over Aaron Murray they must. It seems Georgia may finally have all defensive hands on deck, and this defense will get scarier by the week.

Wisconsin at Nebraska — Two teams with big hopes before the season who both hit a Pac-12 road bump. Both are hoping they’ve got things straightened out now, Nebraska after pounding the crap out of Arkansas State and Idaho State, and Wisconsin after benching Bret Bielema’s latest ACC quarterback poach and inserting a greenhorn. The ACC veteran is Danny O’Brien, and apparently he turned over the ball one too many times for Bielema’s taste. The youngster is Joel Stave, and he looked competent against UTEP last week. Whichever team picks up a second loss drops off the national-importance radar. Seems like Nebraska’s offense should be too much for the Badgers — you know, Taylor Martinez and Rex Burkhead of Hunk of the Week fame — especially playing in Lincoln. Wisconsin’s excellent running back, Montee Ball, seems likely to play, despite sustaining a head injury in last week’s game.

And Despair Fell Upon the Assembly

The Book: A Fan’s Notes
The Author: Frederick Exley
The Sport: Football Appreciation
The Dope: My last recommendation was some healthful, sugarless Cormac McCarthy.

I’m strict but fair, so this week you’re getting your dessert, your constant page-to-page gratification. It’s too bad Exley had to live through this, but lucky for us it resulted in one of the most consistently engaging books ever written. It’s hilarious half the time and sad half the time, and Exley doesn’t take pains to hide that often he was a mean, immature jerk. Let’s make a deal. If you haven’t read it, try the first chapter. If you wish to put it down after that, you may do so fully absolved of any attendant book-abandonment guilt. You won’t put it down, though.

Exley is a fan of the early 1960s New York Giants of Y.A. Tittle and Frank Gifford, and the further the author’s life degrades, the more the Giants mean to him. Exley’s fanhood grows more unattractively zealous as his marriage breaks up and he loses custody of his twin sons. He winds up back in Watertown, New York — where his father, now dead, is a local sports hero — teaching high school English. Let me shut up and offer a couple quotes:

In this one, Exley is describing his students’ papers:

… a sophomore thought the characters in Julius Caesar talked “pretty damn uppity for a bunch of Wops.”

In this one, he’s discussing his choice of game-day bar:

… as I had come to find myself relying on the Giants as a life-giving, an exalting force, I found myself unable to relax in the company of “unbelievers,” in the company of those who did not take their football earnestly or who thought my team something less than the One God. At those times, in those alien places, I felt like a holy man attempting to genuflect amidst a gang of drunken, babbling, mocking heretics.

Those are from Chapter 1. He doesn’t arrive at the Avalon Valley State Hospital for the Mentally Insane until Chapter 3.