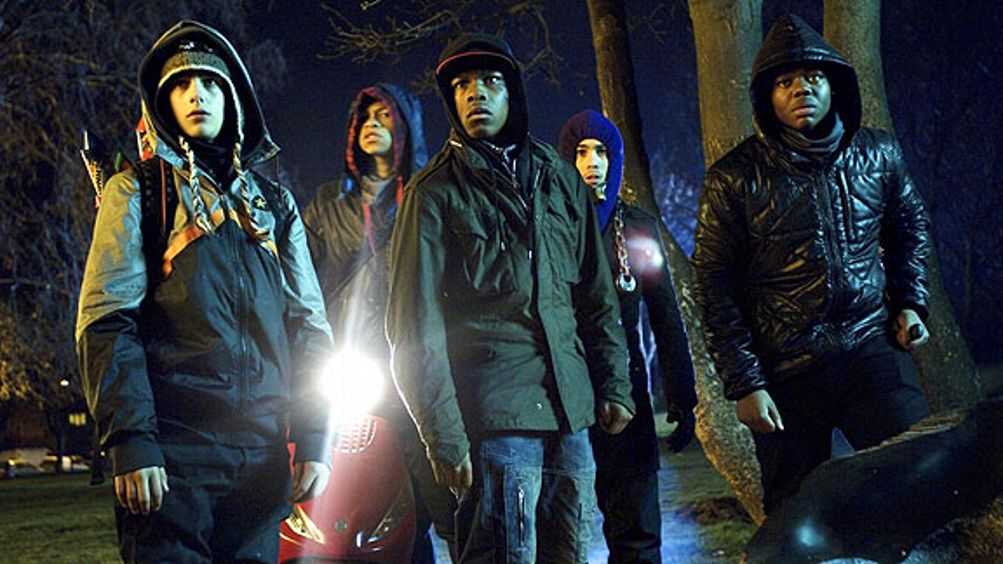 “Some days I’m asking God but then the Internet is quicker”
— Wiley, “Information Age”

In the face of alien invasion, it’s always the young who refuse to blink. They have yet to rationalize whether we are alone in the universe. They have no time for disbelief or worries about whether insurance covers for beached spacecraft. In the movies, they are the characters that most easily sympathize with the alien other, realizing that the adult world’s alarmist policy of shooting first and asking questions later might not be as mature as it seems — Iron Giant, E.T., or Flight of the Navigator come to mind. If anything, kid and alien usually end up arriving at the same conclusion: They are equally misunderstood. But in the case of the recent British sci-fi comedy Attack the Block, there is no room for sympathy, no reason for the kids to think that the aliens share anything in common with their grim lives beyond a propensity for disappearing into shadows. These kids have enough problems of their own: depressing public housing, official neglect, abusive police, absent parents, no future — and the only reprieve from all this comes in the form of spontaneous mayhem or blunted Xbox sessions. Where have I heard this one before?

The directorial debut of British comedian Joe Cornish, Attack the Block is tidy, charming, and slapstick, even more so to ears unaccustomed to sentences terminating with a quasi-interrogative innit? It follows a quintet of marauding midteens who rule the corridors and back alleyways of the fictional Wyndham Towers, a generic and generally hopeless council high-rise. When Moses (John Boyega), who leads by virtue of being tallest and least likely to dissolve into giggles, accidentally incurs an alien invasion, our lads must defend their block. No parents are enlisted, and the idea of calling the police seems even crazier than the blacker-than-black aliens with florescent fangs that rain from the skies. Rather, the strangest aspect of all this is that anyone — or, in this case, anything — notices them at all. “What kind of alien would invade some shitty council estate in South London?” one of them wonders. Another theorizes that the government, disdainful of their kind, “sent monsters to get us.” The message is clear: The threat of alien apocalypse only dramatizes how aimless their lives have become. As one of them sighs: “Feels like just another day in the endz [slang for the estate], man.”

What can a movie, let alone one with such modest ambitions, tell us about riots? Not very much beyond a caricature of motives or the occasional, profound, stare-into-the-middle-distance soliloquy diagnosing the social crisis around them. But it was a question I thought about while watching Attack the Block. Throughout the theater there were ripples of knowing laughter at all the most cloying parts — whenever a child would protest that he wasn’t the problem, that he was merely a misunderstood casualty of state neglect, that the carnage descending upon their towers had nothing to do with “rap or violence in video games” or drugs or gangs.

In this way, Attack the Block is polemical and frank about its politics, insofar as a comedy about aliens attacking officially neglected sectors of the city is political. Instead of pausing and thinking through the global consequences of an alien invasion or mourning the passing of their friends, the surviving kids strive on and fight. Breaks in the action occasion a kind of comic book-level meta-analysis, as they pontificate about the grim contours of their lives. These appraisals are for our benefit. A Union Jack is employed to dramatic, life-saving effect, as if to reiterate the movie’s expansive vision of who really counts as a British hero. It is the kind of movie in which young teens answer each other with rhetorical questions about the nature of power, and nobody calls bullshit.

Perhaps it is not an alien invasion, but something is going on over there; we know this to be true. By now this has become a familiar kind of knowledge. The reason something like Attack the Block feels polemical is because it is, at this point, such a mainstream and approachable story — of a distressed social fabric, of inner-city ennui, of the risk that apathy might someday turn toward something less (or more, depending on your perspective) productive. It’s no longer a shock to the system to witness or hear such things on-screen. What once may have seemed a radical gesture of truth-telling is today just another premise for great entertainment. Boyz n the Hood felt revolutionary in 1991, when inner-city stresses seldom traveled beyond the county line. But 20 years later, it no longer seems prescient: It’s a context we’ve grown accustomed to.1 Perhaps this is why Ice Cube seemed so dangerous and transformative before the Los Angeles riots and so erratic afterward: Once your prophecies have materialized — once they’ve refused to listen to you and suffered the consequences — then there’s no direction home.

“It’s not like the police are scared of them anymore,” one of Attack the Block‘s lone adults laments. “They’re fucking monsters.” We laughed, aware of the unintended irony of this dashed-off judgment within the film, as well as beyond it. These monsters are ones who walk the streets, begging to be noticed. What’s so quaint and ephemeral about Attack the Block — what we will soon look back upon and laugh at, as we do Cuba Gooding Jr.’s blowy shirts in Boyz n the Hood — is the way it dramatizes this feeling of being hidden in plain sight. When Moses and his gang pledge to fight back — to live the dare: This is my block, get me? — they begin reaching out to their comrades. “This is too much madness to explain in one text!” one of them exclaims before noticing his mobile plan permits only one more message. As they puzzle over what to do with their prized kill, they entertain delusions of grandeur: They need to eBay this; an alien might be their ticket out of the estates. They need to contact the tabloids or the Guardian — anybody. They don’t have a clue how to reach the rest of the world, let alone the other side of London.

That’s why it was a strange sensation to watch such a playful movie about defending the block as the actual block attacked — in London, Liverpool, Manchester, Birmingham, and beyond. The riots could not be contained; they would not be ending in a timely manner before the next showing. There were no limited text messaging plans to keep hysteria safely yonder. Throughout England, there was no common purpose, let alone aliens that might have helped divine the righteous from the wrong. The riots did not emanate from some common political vision, beyond the vote of no confidence that is a shattered window. Local businesses were reduced to ash, the irony of the dispossessed pillaging their own neighborhoods was dissected, and, in a measure of how serious things had become, the English Premier League even discussed suspending the first weekend of matches. In the end, it was decided that only the match between Tottenham Hotspur and Everton would be postponed. Probably best not to encourage thousands of football fans to congregate at the riot’s epicenter.

In the aftermath of the uprisings in England, everyone wondered not why this had happened but how. The shock was not that people felt moved to smash and grab — it was that they had been so efficient in doing so.

We were all watching the same movie, albeit one with no director or discernible plot. There were unbelievable little side-plots: a man, wrongfully accused of arson, whose house was burned down to the ground; two twentysomethings sentenced to four years in prison for organizing a riot on Facebook that nobody showed up to. A tagline for the poster emerged, courtesy of a young man in Tottenham confronted by a journalist: “You wouldn’t be talking to me now if we didn’t riot, would you?”

In the aftermath of the uprisings in England, everyone wondered not why this had happened but how. The shock was not that people felt moved to smash and grab — it was that they had been so efficient in doing so. We once worried about a digital divide, about the high cost of computers and modems and unequal access to game-changing technology. But in England, as with the Arab Spring earlier this year, it has been the authorities who have been slow to understand the possibilities of hashtags, private messaging systems, and Facebook. What role social networking played in England is still being debated. But one thing is certain: The figure of the mob, the crowd, and, by extension, the public, have changed with the possibilities of our networked times. The New York Police Department has recently formed a “Social Media Unit,” and earlier this week officials in San Francisco interrupted cellular phone service at one of its subway stations to thwart a planned protest.

There is always something going on over there, and when we see it on-screen or hear about it in a song it remains safely beyond immediate concern. But not when it interrupts the goings-on of everyday life: football, for example. I followed the events in England hour-by-hour via Twitter, blogs, YouTube clips hastily uploaded and quickly taken down. It was a peculiar rush, tracking worldwide conversations about motive and method, witnessing blocs of users arrive at consensus, all within 100 characters of action-poetry. Feeds I usually rely on for reports of Manchester United’s youth squads were passing on grainy videos from city squares and images (probably fake) of bandits brandishing their pilfered iPads. Footballers themselves began weighing in. Newcastle United’s fascinating midfielder Joey Barton, no stranger to violence (or surveilance footage) himself,2 was more philosophical: “Violence always comes from a place of misunderstanding and low to zero self-worth, well mine did anyway………#educatethem.” Everton midfielder Tim Cahill offered a longer view: “Wow this is out of control, should have been [sic] a curfew country wide tonite . There is defo going to be a BLOCKBUSTING MOVIE made about all this.”

We don’t need to wait: These movies have already been made. All throughout the Internet, dozens of movies, shot with Flip cams and cell phones, screened riot footage. Against the universalizing blockbuster, mere sketches of narrative: bloody combat and things getting smashed and stolen. Each starred the same man, features obscured by balaclava.