Never Been in a Riot 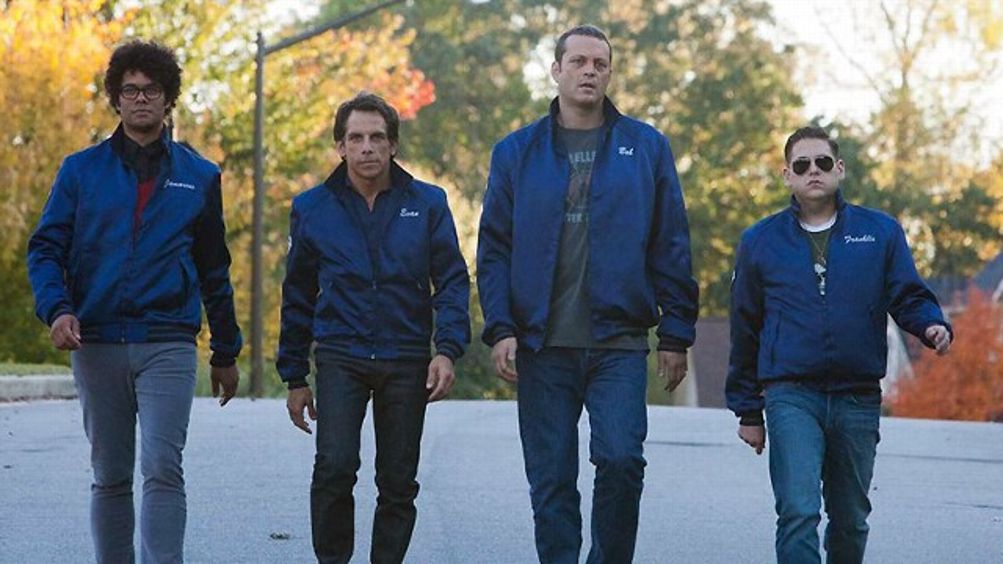 The Watch, in theaters tomorrow, was originally titled Neighborhood Watch. The first poster for the film mocked up a street sign featuring a dark figure with a forbidding diagonal line across its neck; the sign itself was riddled with bullet holes and slime. In the trailer, the film’s four stars, Ben Stiller, Vince Vaughn, Jonah Hill, and Richard Ayoade, rode slowly through a suburban neighborhood as kids gaped and mailmen fumbled their mail and Dr. Dre’s “Still D.R.E.” — I’m representing for the gangsters all across the world — played on the soundtrack. Toward the end of the clip, Hill, using his hands, pretended to shoot at the children beyond his window. Then a 17-year-old named Trayvon Martin was killed by a neighborhood watch volunteer in Sanford, Florida.

Fox pulled the advertising. A month later, they changed the name. The film’s big reveal was hastily and unceremoniously revealed: Vaughn, Stiller, Hill, and Ayoade were patrolling the neighborhood not for anything recognizably terrestrial but for alien invaders. A Fox spokesman told THR: “We are very sensitive to the Trayvon Martin case, but our film is a broad alien-invasion comedy and bears absolutely no relation to the tragic events in Florida.” THR pointed out that this was not the first time this had happened: Clint Eastwood’s Hereafter was removed from Japanese theaters after the tsunami there. Fox itself had been down this road before with the sniper film Phone Booth, the release of which had been delayed by the advent of an actual Beltway sniper.

Movies are among our last forms of genuinely communal entertainment; they’re where we go to escape ourselves. But because their economics are so spectacular, and their place in the culture still so large, they’ve also become a place where reality can intrude in fantastic, unwelcome ways. A tiny but significant part of what was so viscerally horrifying about what happened in Aurora, Colorado, last week was the way in which that communal space was violated. The way in which the outside world just overwhelmed it. After the awful details of what happened in that town became evident on Friday, Warner Bros. spent the weekend in a kind of paroxysm of shame they probably did not deserve and made promises they probably should not have made: There would be no Dark Knight Rises box office numbers (there were); ads would be pulled (for a few days); the Paris premiere would be canceled (but the movie’s rollout would continue as planned).

On weeks like this one, the bottom falls out of jobs like mine. And movie studios, having invested tens or hundreds of millions of dollars in films like The Watch or The Dark Knight Rises, have no choice but to look into the same abyss: For a while, whatever they do won’t register. Nor should it. It’s not only distasteful to talk about marketing and box office numbers in connection to the real-world acts of violence that sometimes affect them; there is simply no equivalency or comparison to be made. Sometimes movies don’t matter.

But it’s still possible to observe, in a value-neutral way, that The Watch began cursed and will now seemingly end cursed. Most of that is coincidence and a relatively benign kind of bad luck. Some of it, though, we can blame on the movie itself.

It has been a long several thousand years of comedy that operates on the barely suppressed rage and resentment of white men. This sounds judgmental, or pejorative; it isn’t meant to be, particularly. People have the right to make comedy about whatever they feel like making comedy about. And we are living in a golden age of comically frustrated white dudes raging against their own cosmic impotence and eclipse. Danny McBride, Judd Apatow, and Will Ferrell are all poets of the form; the Watch gang, which features not just Stiller and Vaughn but also Hill, Seth Rogen (who cowrote the screenplay), and Lonely Island’s Akiva Schaffer (who directed it), is like a Dream Team of chubby suburban anomie.

And suburban anomie is pretty much what The Watch is about. Stiller plays a Costco manager and lonely man bowling alone through life in a small town. Vaughn, as a protective father of a wayward teenage daughter, is a scared man with a man cave. Hill is an aspiring vigilante and police academy washout. Ayoade, last seen in this country directing Submarine — an Ikea bookshelf of a Wes Anderson movie — plays a mysterious foreign gentleman with an accent and an immaculately tailored jacket who shows up to the first meeting of the neighborhood watch Stiller forms after the murder of one of his employees. (“Looks like your friend was ripped apart by a wild animal,” says Will Forte’s entertainingly disinterested cop.) Body-snatching aliens will turn out to be the culprit, but first there are loud rap songs to be ironically blasted in minivans (M.O.P., rich for life, hopefully) and local punks to be disciplined.

The movie is funny, in the way that past Rogen and Evan Goldberg–written stuff like Pineapple Express and Superbad is funny; it takes its own genre tropes — in this case, realistic and frightening monsters, topless chicks, male camaraderie under pressure — deadly seriously, then adds jokes. “Did anyone here cry yourselves to sleep last night?” Stiller asks a crowd at a local high school football game, announcing the formation of his neighborhood watch while wearing a shirt that says NO MORE MURDERS. (“Society has rules, and one of those rules is you can’t kill someone and take their skin!”) Later, in a sequence born out of what I imagine was an exceptionally marijuana-filled few hours on the part of Rogen or Goldberg or both, Vaughn’s character discovers Russian nesting dolls for the first time: “You’ve got to be kidding me!” he says, unscrewing the second doll. Billy Crudup, as a spooky neighbor who moves in across the street from Stiller, plays the maybe-alien intruder like some posh-libertine cross between Hugh Hefner and John Waters; Rosemarie DeWitt cameos as Stiller’s desperate-for-affection wife and deserves better, as women often do in films like this one.

The Watch shares a plot with last year’s British comedy Attack the Block — aliens plummet from the sky in an unlikely location and are fought off by an unpromising band of wisecracking locals. In Attack the Block — a better, or at least less solipsistic, movie than The Watch — the barbed joke was that battle between the extraterrestrial invaders and the local teenage residents of the council estate where they land is essentially alien on alien: When the resident old lady in the high rise where they all live gets worked up about the “fucking monsters” outside her door, she’s talking about her own human neighbors. “World War III out there,” she says bitterly, “you wouldn’t know the difference.” When the first alien falls to Earth, the kids try to rob the car it crashes into. Police? “You’d be better off calling the ghostbusters, love.”

The Watch‘s politics, to the extent that they exist, are more self-serving. In confronting the other, Stiller, Vaughn, and Hill find themselves.1 Broken white men, be healed!

Broken white men, be healed!,” for what it’s worth, is probably the plot of a good 75 percent of all Hollywood films, and is definitely the plot of 100 percent of the movies by, for instance, a guy like the aforementioned Wes Anderson, a director I adore. And to judge the politics of a comedy independent of the quality and knowingness of its jokes is to pretty much give up on comedy altogether — there is no Louis C.K. in a universe in which comedians are judged by their sensitivity to sensibilities other than their own (no Daniel Tosh, either, but that’s just the tax we pay). The Watch is genuinely amusing, most of the time, which is all we can really ask it to be.

Some films capture the zeitgeist; others are victims of it. And still others, like The Watch, end up doing just the wrong amount of both.

In one late scene, Schaffer and his two Lonely Island confederates, Andy Samberg and Jorma Taccone, make cameo appearances in the film — all three men are nude, standing in a circle, talking about cinematography. It’d be a self-indicting metaphor if not for the fact that it’s an incredibly effective bit, random and absurdist and startlingly graphic. Stiller and Vaughn have no such surprises in store — a recent New Yorker profile described The Watch as “day job” work for Stiller — but it’s remarkable how good both men are; Vaughn is playing the same role he’s been playing since Swingers, if not before: aggrieved and overly honest and kind of unbearable, except for the fact that his brand of indignant self-righteousness just does not stop being funny. “Yolk’s on me?” he says incredulously, after being egged by a gang of marauding kids. “A fucking pun?!”

But it has not been a good week for the barely submerged rage and resentment of white men — one of the worst in recent memory, in fact, a designation that does not exactly lack for competition. The Watch script has been kicking around for four years in one form or another; shooting finished on the film in January, a month before Trayvon Martin’s death. Some films capture the zeitgeist; others are victims of it. And still others, like The Watch, end up doing just the wrong amount of both.