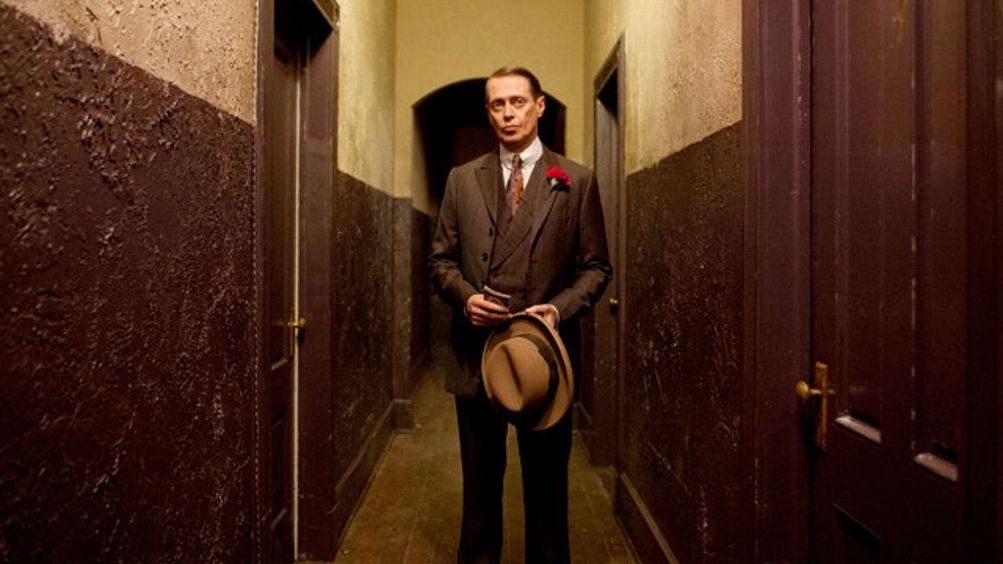 Boardwalk Empire opens with a one-minute, 33-second title sequence before every episode. Steve Buscemi’s character, Nucky Thompson, stands on the beach of Atlantic City as he watches thousands of bottles of alcohol emerge in the waves. He glares with anger and gazes in deep thought, then walks toward an illuminated Atlantic City as modern rock music plays. For the first two seasons, I would get angry watching just five seconds of those credits, wondering how it fit with the show, what it even remotely symbolized. For years, I tried to string together a theory that the show as a whole would be perceived differently if that title sequence were abstractly accessible in a Mad Men–y kind of way, or even a more generic montage of cast members.

Basically, I spent the first two seasons of Boardwalk Empire trying to figure out whether or not I even enjoyed the show. It featured premium producers, directors, writers, and actors, but it never felt like you were watching the show of the moment. Boardwalk Empire has been popular enough to get renewed regularly (it will be back for a fourth season next year), but it’s been difficult to come to a consensus on whether or not it has been a fulfilling experience. There’s a gap between high-end critical acclaim and casual fans. The uninitiated never get it. ‘It’s boring,’ they say. ‘It’s trying to be something it isn’t.’ And maybe they were right. Fortunately, Season 3 has changed everything.

I admit that the first two seasons were not always compelling. I wasn’t always quite sure who anyone was, why they were part of the story, or what exactly was at stake for any of these people. It was a period piece with direct historical references, but it took artistic liberties, drawing on facts but routinely altering them for dramatic purposes. For example, Al Capone (Stephen Graham) has been lingering since the pilot episode, and for nearly three seasons his presence always felt forced, like an easily identifiable star in this constellation of anonymous true-life figures. Then, last week, he brought an army to fight for Nucky Thompson, justifying nearly 40 episodes of hanging around. It has felt like there were too many characters, too many story lines, and too much meandering. When you’re watching 50-minute episodes for two years, it isn’t easy to just quit on a substantial ‘TV time’ investment. So I kept trudging along. Boardwalk Empire is so visually appealing, and the time period rendered so well, that sticking with it wasn’t completely unrewarding. But it was hard.

Then something happened. Something worth it. They killed Jimmy Darmody (Michael Pitt) at the end of Season 2 and the stakes for every character on Boardwalk Empire were raised.

The decision to terminate the beloved Jimmy, essentially the star of the show, has been the primary talking point for followers. He was the most likable character of the show’s first two seasons, largely because his story line was the most coherent. However, he made a decision to go to war with his mentor and father figure, Nucky, and he appropriately paid for it. The death of Jimmy Darmody made it clear that characters in Boardwalk Empire can’t, and won’t, last forever. There won’t be any happy endings; this became a show about survival, with each character trying to align with those in power, angling to make the right move at the right time.

That presented some problems — it isn’t easy for any series to function with an evolving cast. However, the constant threat of an axed character from episode to episode makes every scene of Boardwalk Empire a uniquely stressful experience. At this point, it’s probably the show’s greatest asset — it forces you to immerse yourself deeper in every scene, to buy in. A character won’t be brought along for the sake of likability, or because he is a “good person” within the context of other characters. All of these people made the decision to live in an underworld where they’re always at risk of losing everything, even Kelly Macdonald’s saintly Margaret Schroeder.

One of this season’s great cameos was Rowland Smith (Nick Robinson), a teenage boy who’d stolen a houseful of liquor from Nucky Thompson. As Nucky, Rowland, and Owen Sleater (Charlie Cox) hid in a basement from prohibition agents, it seemed like we were watching the next great Boardwalk character emerging. Then Nucky shot him in the back of the head.

Great performances aren’t rewarded with more screen time. We enter the Season 3 finale wondering if Nucky Thompson’s reign over Atlantic City will continue, or if it’s time for the Gyp Rosetti era. No matter how the finale on Sunday twists — or doesn’t twist — the show will enter an exciting fourth season with either character.

There’s no doubt that Bobby Cannavale, who plays Gyp, is capable of carrying the show into a golden era. Gyp Rosetti has elevated Season 3, delivering an element of chaos that has made the show hard to turn away from. Rosetti is a volatile, charming man living in fear of missing out on his piece of the pie. His comedic quirks, sexual fetishes, and rash acts of violence make for great television, but his character is most valuable as a depiction of the deranged personality at the core of anyone making power moves in the mob underworld.

Boardwalk Empire is different from the genre of long-form television series drama it is frequently lumped in with, and even criticized for attempting to ape. Single episodes aren’t written with the purpose of generating a Monday-morning talking point. You’re not going to get Owen Sleater’s body in a box every week or a Gyp Rosetti choke-sex scene just for the sake of maintaining middlebrow interest and generating watercooler talk. All of the seemingly disconnected story lines that Boardwalk Empire carried through the first two seasons are finally important moments of emotional capital. And creator Terence Winter is cashing in.

This season, Boardwalk Empire has woven such a deep thread of individual stories that we’re finally seeing the repercussions behind every character’s decisions. I feel like I need to go back and watch the first two seasons now that I finally understand how to watch Boardwalk Empire. It’s more than just a ‘show of the moment,’ strategically employing dramatic storytelling tricks to addict viewers. It’s a show that’s been given the runway to tell a richer, more prolific story.

The Season 3 tagline resonates with every turn in the series: “You can’t be half a gangster.” It’s clear now that mob life won’t end well for anyone. The only question for the season finale: Whose time is finally up?