The Incomplete Tale of Matt Ryan 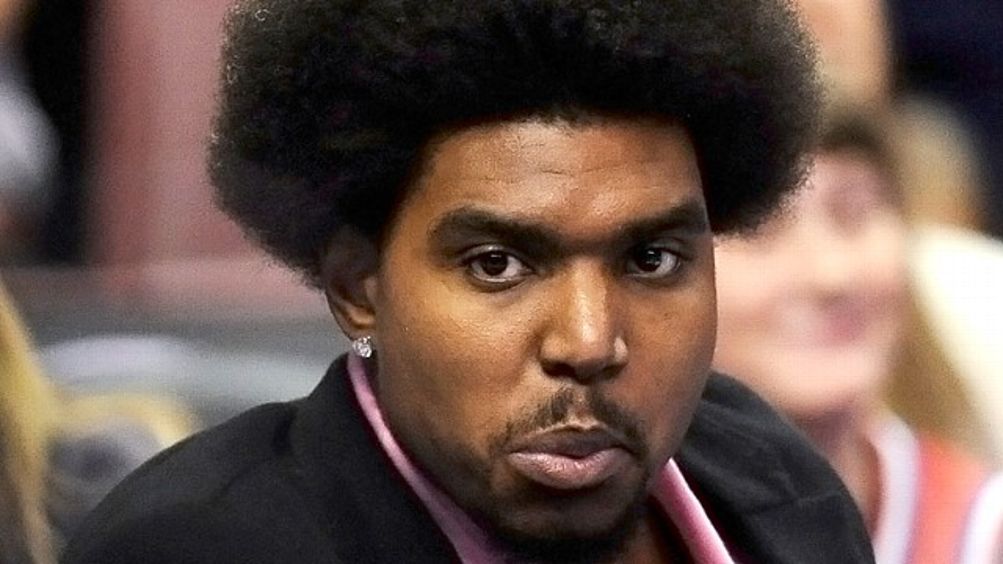 Andrew Bynum has played zero minutes of basketball for the 76ers. People are freaking out. Some of those people live in Philadelphia. Some of them live on the Internet or near a television, and they’re not worried about the Sixers or Bynum, per se, or even his gimpy knee. The worry goes deeper than that, since some of the people worried about Bynum at the moment aren’t seeing a highly paid, elite athlete. They’re seeing a highly paid, elite athlete who can’t seem to find his comb. They’re seeing ye olde hot mess.

Since Bynum left the Lakers this year for the Sixers, his close, shaped-up haircut has puffed out into an Afro. When the Afro had its picture taken in a Sixers uniform for the team’s media day in October, it featured faint shocks of copper and the sort of optimism and history that evoked Julius Erving. It was vintage hair. It was championship hair. The passing weeks saw Bynum watching from the floor, in blazers worn over T-shirts and polo shirts and dress shirts. You can tell he’s going through something because his hair is going through something, too.

That’s the thing about having that much of that hair. It will rat on you. There were nights when, for instance, Bynum looked like he’d recently risen. He didn’t look groggy. The hair did. I don’t know whether this is the first time Bynum’s had this much hair, but it’s obviously giving him grief. A few weeks ago, he watched a loss to the Pistons with hair that can be described only as soggy. It was half-straightened and perhaps relaxed or texturized or activated. The pride of the Afro had wilted. That night it looked like a cake that fell in the oven, like the flowers that droop when Pepe Le Pew saunters by, like an overwatered plant. 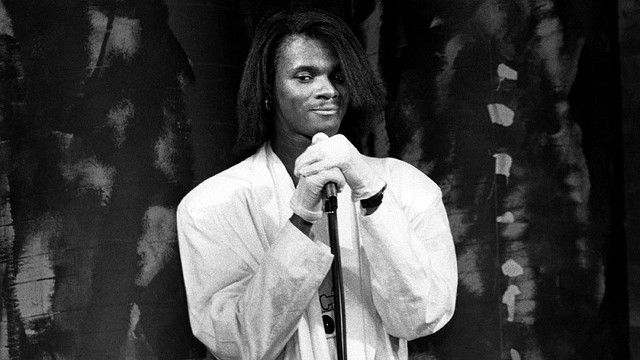 Jermaine Stewart was a Soul Train dancer who had a few hits in the mid-1980s, including the boisterous chastity anthem “We Don’t Have to Take Our Clothes Off.” If Grace Jones and a drag queen had a baby, and the baby were an Hermès scarf, and the scarf could lip-synch and spin and wear a peplum frill jacket and sombrero over spandex biker pants in a way that says Alexis Carrington, Greg LeMond, and “olé!” at the same time, that baby would be Jermaine Stewart. The outfits didn’t make Stewart a thing. The hair did. He often wore it down to his chin, and it was the straightest thing about him. It was, in a word, perfect. A lot of black women lost sleep over that hair. Every time he swung it out of his face it was like a slap to theirs.

Stewart died of AIDS-related causes in 1997. Even at the peak of his popularity, you couldn’t quite believe it. His videos paired him with women, but all he wanted to do was dance. How could this and homophobia exist at the same time? That’s despite his being just a more aerobic, nightclub-friendlier descendant of the legendary Little Richard. (Little Richard would have killed for that hair, too.) To see an image of Bynum the night of that loss to the Pistons, with that willow weeping on his head, is to weep for him. It’s as if the hair were trying to get to Jermaine Stewart’s level of confidence and ran out of gas.

We don’t know where Bynum’s going with this. But it’s not to the barber, not yet. He might understand that this hair has achieved a narrative, that it dramatizes his straits, that the enigma of the hair matches the suspense concerning the health of his knee. Of course, he might not yet be going for anything. He could just be in search of something for the hair to do or be, and that would be touching in its old-fashionedness. In an age in which players can call an expert to chauffeur them toward fabulousness, Bynum appears to be driving by himself.

The league is full of pseudo-accidental style, like James Harden’s playoff grizzly beard and Fishbone faux-hawk, the ownership of which is a self-conscious admission of guilt: He broke it, he bought it. What about Brandon Jennings? His hair has undergone enough willful and mostly successful changes to be its own barbershop poster. (“Just give me the Jennings number 12. Not the twists, man. The trapezoidal high-top fade.”) There’s so much good intent with those two. With Bynum, it’s intent caught in an existential search for style. He’s in a new city, needs a look, and doesn’t yet know what it ought to be and whether he’ll even stay in that city long enough to discover what that look is. But as he might already have discovered, no one cool, eligible, or with a home looks like that in Philadelphia. 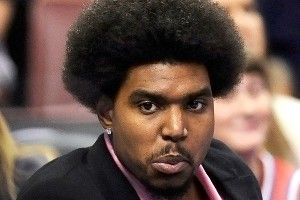 Maybe he should try to get back to Los Angeles. Things just seem easier there, even if you’re injured. Just as Bynum exited the Lakers, Steve Nash entered. Like Bynum, Nash is out indefinitely (his left fibula’s fractured). Unlike Bynum, he looks sure of himself. Nash arrived in L.A. and did what season after season you prayed he would: He cut his hair. Nash seemed immune to the style revolution. He maintained the persona of a man too nice and too team-oriented to primp himself. He kept his hair longish, and even on a good day its length lent him a kind of cavemanishness, and he’s scarcely the most Cro-Magnon–looking fellow in the league.

The new hair is a surprise: trimmed on the sides, swept over on the top, parted on the side. One night, the haircut sat courtside and wore a slate-gray three-piece suit with a skinnyish burgundy tie and a pocket square so neatly pocketed that it should be conducting seminars on how not to suggest a man’s suit is belching fabric. One can only hope that Jerry Buss, the team’s honcho and a true style wreck, is paying attention. This is how to look as if you own something.

There are other side parts in the NBA. Kirk Hinrich’s gives the Bulls their most distinguished hair. Nick Collison has one, too, and without Harden it’s the most interesting development on the Thunder. Meanwhile, a side part on Andris Biedrins is humanizing. Now he seems less like the villain in an Iron Eagle movie and more like one of the movie’s producers. But on Steve Nash this haircut is transformative. Seeing it for the first time was like that moment in a hard-rock video when the girl nerd whips off her glasses and turns into Tawny Kitaen. It might even be better than that, because in a hard-rock video you always know the nerd is sexy. She’s just wearing a ponytail. With Nash, there really was no way to know that a haircut would change the entire meaning of his face. You’re embarrassed to notice him now. Unlike the other side parts, Nash’s seems proportional to the rest of him. Unlike the other side parts, Nash’s has a nickname. Indeed, Kobe Bryant got a load of the hair and the suit and skipped the obvious putdowns — calling him, say, a Freemans Sporting Club zombie — and dubbed Nash “Gatsby.”

Since there’s nothing arch about this haircut on Nash, nothing aggressive or self-conscious about the haircut in that suit, it doesn’t evoke a hipster insincerity. There are no frills with this look, nothing bearish or effete; there’s no handlebar mustache or big goatee, no eyewear or a hat. Nash achieves purity, cleanliness. This look crystallizes the cunning illusion of innocence he’s always given off: It’s so Gatsby.

The fun being poked at Bynum is easy. One day the hair really did look like Frederick Douglass’s.

Bryant’s nickname is stunning in its accuracy. It’s neither adulatory nor racially or socially derogative, just beautifully, descriptively, concisely, perceptively apt. Bryant recently had another 40-point game, but recontextualizing Steve Nash might be the highlight of his season.

This all lends Los Angeles the power of sorcery. Bynum’s been cursed since he left the city. Nash has been transformed since his arrival. Looking at the one guy makes you feel sad for the other. Even injured, Nash is kind of thriving. Bynum, who’s younger and less experienced, seems lost.

The fun being poked at Bynum is easy. One day the hair really did look like Frederick Douglass’s. On another, it was early Don King. But the issue isn’t what Bynum’s going for. It’s what Bynum’s going through, professionally and tonsorially. It’s hard, and the gray veining through his young hair implies as much. He’s a basketball player in frustrating want of an outlet for his talent. Without that, he’s just some dude with occasionally bad hair living under the tyranny of the camera phone. For a couple of months, his mess has been hot, and it shows no signs of cooling down. But there’s a sobering, defiant honesty in that. If he’s not working, then neither will his hair.