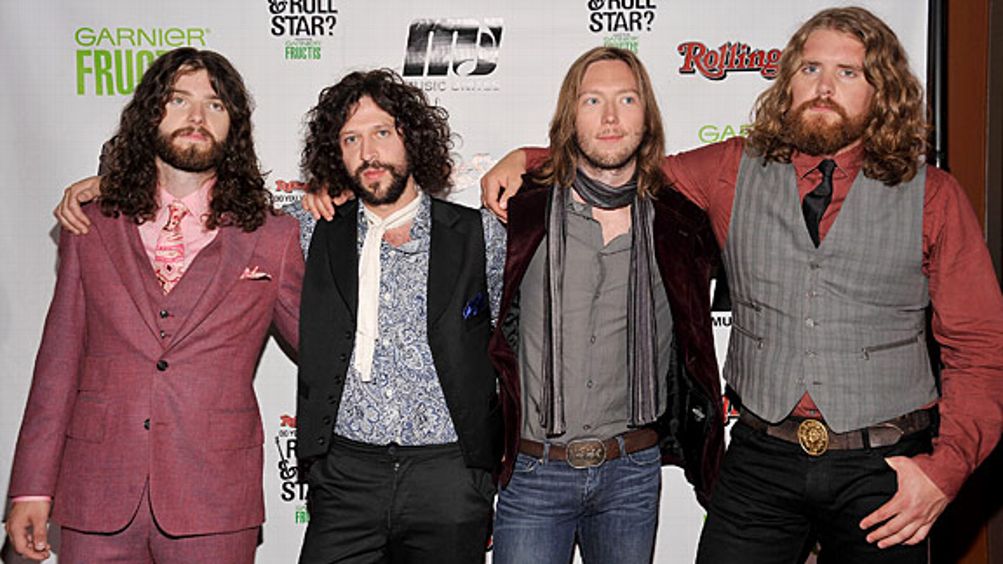 Landing on the cover of Rolling Stone magazine means that you have ascended to the top of popular culture, and your image represents what is ‘now,’ ‘in,’ and ‘it.’ You might be in a popular band who released a definitive album. Every Middle American who is waiting in a doctor’s office will see your image and associate the Rolling Stone cover with what they are supposed to be aware of. Maybe you are a popular comedian who is ‘The Funniest Man Alive.’ Recently, the Jersey Shore‘s Snooki was on the cover, which was probably fair because Jersey Shore was a pretty relevant cultural phenomenon, even if it means you ‘hate what our culture has become.’

While all magazines have moved into the era in which they have to put popular idols or Twilight-soundtrack-wave artists on their magazine covers in order to actually sell copies to impressionable tweens, the overall perception of the Rolling Stone brand seems to still be relatively solid because they still “have a strong editorial voice.” Many other generalist magazines and websites have just gone on autopilot as cool-hunting content farms that still have an intact monetization model. One could argue that Rolling Stone has attempted to stay progressive because they still try to ‘break’ investigative stories and their profile pieces haven’t entirely degenerated to human advertorials.

No matter the size, scale, or platform of a publication, the branded trait of ‘having a strong editorial voice’ is one of the most critical elements that enables a sales team to effectively ‘pitch’ the value of your content source to brands. You have the eyes of a well-educated, appropriately aged demographic who are willing to tolerate well-integrated marketing campaigns so long as they don’t make the reader feel like he is a lifeless idiot. It doesn’t matter if your ‘strong editorial voice’ exists in print, online, or a mix of both — all publications are fighting against one another to convince brands that their platform will actually deliver consumers.

I have been intrigued by Rolling Stone‘s latest advertorial innovation, which has constructed an entirely new context to define and enable ‘selling out.’

Did you know that Rolling Stone recently had a contest for a band to land on their cover? In their own words, “The editors at Rolling Stone picked 16 unsigned bands to compete for the most coveted prize in music — the cover of Rolling Stone.” They assembled a pupu platter of mediocre bands who weren’t relevant or innovative enough to break into popular culture based on their own merits, hard work, or random luck, then gave them the opportunity to ‘win’ the cover shot. The entire contest was a sponsored experience that was brought to you by the shampoo brand Garnier Fructis. They utilized the most effective traffic-hoarding scheme — the ‘online vote’ to properly integrate their online and print platforms.

Who won the contest? “After months of competition and over 1.5 million votes cast online, the wait is over: The Sheepdogs have become the first unsigned band ever to appear on the cover of Rolling Stone.” Fortunately for Garnier Fructis, they can claim that they scored a ‘major brand win.’ They didn’t just overpay for people to skim past banner ads on some website, they got 1.5 million people to “interact with their brand,” sponsored a definitive pop culture image for a month, and initiated discussions about commercial and editorial authenticity that can reference their brand.

The natural reaction to this experiment inspires the traditional debates about ‘selling out,’ discussion of ‘art versus commerce’ and the ‘compromise of editorial voice in order to run a monetized publication.’ “What is Rolling Stone thinking? They are TOTALLY shooting themselves in the foot by admitting that even their most valuable piece of magazine real estate is for sale! What can they do to ever ‘get back their credibility?'” Truthfully, no one really cares that much, no one is that offended, and the magazine will continue to be perceived generally the same as it moves forward. It was a disruptive idea that manifested itself in a great sale.

Speaking of compromising authenticity, what is in it for the Sheepdogs? According to their write-up, they have been “touring relentlessly throughout North America for six years.” Maybe they perceive landing on the cover of Rolling Stone as some sort of fast-track to cultural significance. Fans will see this group of bearded dudes who “look like a band” on the cover of Rolling Stone and be inspired to purchase their music. Radio stations will say “that band was on the cover of Rolling Stone” and slot them into heavy rotation on the airwaves. They will tour the country, selling out large-scale amphitheaters, and everyone in America will own a Sheepdogs T-shirt. Eventually, they will win a sponsored contest on Pitchfork.com for a coveted 10.0 (sponsored by Bing).

The natural reaction to this experiment inspires the traditional debates about ‘selling out,’ discussion of ‘art versus commerce’ and the ‘compromise of editorial voice in order to run a monetized publication.’

There is no longer a traditional monetization model for bands, so it feels like we have reached a point where consumers don’t hold it against bands for participating in sponsored promotions. In the past, we could say that the Sheepdogs have ‘sold out’ and dishonored the spirit of organic rock ‘n’ roll. Now we rationalize that bands are trying to maximize their income during their window of relevancy, no matter how absurd their involvement with a silly contest or mass-market shampoo might be. We are ‘at peace’ with the fact that catchy new music is created to be the background music in commercials for Fortune 500 companies.

It feels really difficult to sort out the agendas in the “Choose the Cover” contest for all parties involved, like I am tangled in the warped intentions and perceptions by all active participants: the band, the brand, the magazine, and even the readers.

The fight over the Rolling Stone “Choose the Cover” contest would probably make a good movie or relevant TV series. You could call it The Publication or maybe Editorial Issues or something like that. I imagine some massive war room between the sales side and the editorial side where the slick, young Sales Bros are like, “This is gonna make history! We got their entire online AND print budget for three quarters of 2011!” But then an old-timey editor says, “I’ve been here since we put a shirtless John Travolta on the cover in 1973 1983. Oh my … I never thought I’d see the day.” Eventually there is a massive showdown that involves the old-timey editor getting a severance package that was indirectly funded by the coveted “Garnier Account.” The innovative sales team manager takes his position because the old-timer was ‘slipping’ anyway and no longer provided value to the publication anymore. The final scene will demonstrate how they both have the desire to innovate but just came along in different eras, and both perceive ‘success’ thru ‘editorial progress’ in very different manners for fair reasons.

As consumers, we want marketing teams to ‘make more of an effort’ to engage us and stop wasting our time when we see their ads. On the flip side, it is easy to understand the necessity to deliver real value to brands now that TV commercials just get skipped when they are recorded to DVRs, banner ads on websites are habitually ignored by the well-trained eye, and no one really knows if the ‘circulation number’ of a print publication really means that your full-page ad is producing value. We are entering an era in which every entity has the opportunity to represent a sponsored experience, it is just a matter of how creative and/or desperate you are to sell it.

Because magazines and newspapers existed before the era of the photo-gallery-ified Internet listicle, we still perceive them as sacred spaces with authoritative voices. Ultimately, they have always existed to make money, so it’s not really even a big deal that Rolling Stone sold their “most sacred” real estate. It’s not like the United States government sold the naming rights to the Statue of Liberty presented by Chipotle, or it converted Yellowstone National Park into a sponsored experience brought to you by Bass Pro Shops. I am so used to the sponsored experience that these ideas seem like a fair solution to our national debt crisis, and that the government is leaving ‘easy money’ on the table.

Every day you exist within sponsored content, events, and experiences. At Lollapalooza, fans watched bands play on the Sony stage and the Google+ stage. The Decision was brought to you by Vitaminwater. Brands are tired of existing as peripheral formality that we have learned to ignore over the years. They want confirmation that their ‘ad dollars’ were spent on something that leaves a real impact on consumers. Sponsoring the iconic Rolling Stone cover was a solid attempt at creating a valuable sponsored event, no matter how much weight you still give to the cover as a ‘cultural landmark.’ When tweens and subsequent generations grow up, they will be forced to ask themselves, “What came first: the sponsorship or the content?”

Previously from Carles:
Spotify and the Search for Meaning in Music
How Entourage inspires a generation of young men
Will We Ever Feel Comfortable With the Coach’s Son?
The Lessons of Friday Night Lights