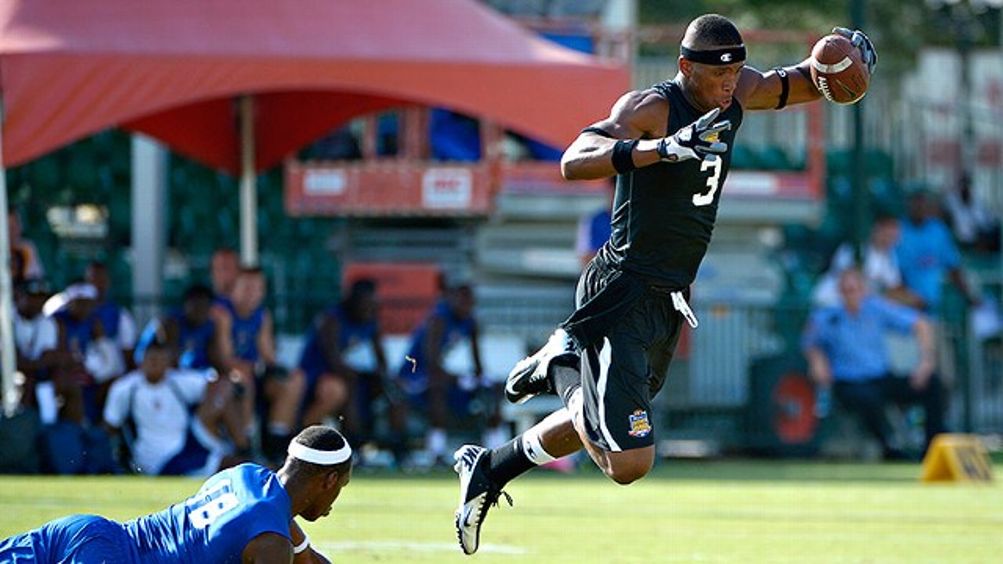 Editor’s note: Rankings in this article were checked for accuracy before publication at approximately 12:30 p.m. PST.

With National Signing Day upon us, I might as well admit to being a recruitnik. My daily involvement with Scout and Rivals and with ESPN’s recruiting pages does not constitute the full-blown malaria that some college football fans suffer, but it’s a solid flu. Yes, I’m one of the grown men with a family and a job who hangs on the hints, winks, and changes of mind of 17-year-old kids I’ve never met. I spend the spare moments of my life praying that high school football players enjoy their visits to my alma mater, that my head coach can out-charm the other head coaches, that our cafeteria chefs out-cook the chefs of other schools, that our weight room is more elaborate, that our “hostesses” are prettier. I want stars in the commit column, baby. My football team has needs and I want those needs met. Still, whether it’s true or not, I consider myself a reasonable recruiting nut. For us reasonable crazies, it works this way:

This leaves the unblessed — the up-for-grabs players, those flirts who fuel the message boards until National Signing Day and sometimes beyond. This leaves the flippers — softened in their commitments by late suitors. This leaves the engaged (verbally committed) who still go on dates (official visits). This leaves the prospects bewildered because the coach who recruited them left for another job or got fired. This leaves the young men caught between their gut feelings and the wishes of their families. This leaves the blue-chippers with iffy grades who can’t commit to their programs of choice until fresh ACT scores appear. All leading to the donning of ball caps or yanking on of gloves or pulling onstage of puppies.1

This is when rational thought begins to cower and hide from fans. This is when we start hurling accusations of dirty recruiting. A player who flips his commitment to your team is a level-headed young adult who finally came to understand the prestige of your school’s history, the potential for championships, the superior academics. His decision makes perfect sense. A player who flips away from your team is disloyal, misguided by bad influences, unfortunate, generally of low character. To be honest, you feel sorry for him. Players who choose a rival school where the depth chart is not favorable to them have been coaxed with floozies and new sneakers. Players who sign up to wait their turn at your school are team guys who see the big picture. And so on.

There are plenty of poorly rated recruits who turn into stars (a handy example is Justin Blackmon, who came out of high school as the no. 91 receiver), but the fact remains that most great college teams have a roster full of guys who everybody knew were going to be good. Let me give you a list of players Saban used — and this is considered one of his less-talented squads — to pummel his way to this year’s national championship: Jesse Williams, Michael Williams, Nico Johnson, Barrett Jones, D.J. Fluker, Amari Cooper, T.J. Yeldon, Trey DePriest, Quinton Dial, Xzavier Dickson, Dee Milliner, C.J. Mosley, Eddie Lacy, AJ McCarron, Ha Ha Clinton-Dix, Marvin Shinn, Ed Stinson, Adrian Hubbard, Kevin Norwood, Cyrus Kouandjio. Guess how many Rivals three-stars are in that bunch. Zilch? Good guess.

The current top-10 recruiting classes (as judged by Rivals) are a rundown of the usual suspects. If you can’t recruit at Florida, then perhaps you’ve been walking around for several months with a sign on your back that reads I ENJOY EATING LIVE HAMSTERS AND LYING TO TEENAGERS and everyone’s too polite to tell you about it. Saban’s machine is greased and humming along. Notre Dame is recruiting like they want to be “back” for real. Ohio State is the perennial recruiting juggernaut of the Big Ten, with Michigan pushing them hard in recent years. LSU and Georgia are SEC powers with no in-state competition. There’s USC, of course, whose limited scholarships have turned their noses up that much higher at the unwashed three-star masses. The Trojans, in a lean class of only 1, presently possess more Rivals five-stars than the next-closest program.

Vanderbilt — James Franklin & Co. are following a respectable 29th-ranked 2012 by trying to crack the top 20 in 2013. Two Georgians headline the class: no. 9 ILB Nigel Bowden and no. 10 dual-threat QB Johnathon McCrary.

Washington — Steve Sarkisian is recruiting as well as could be sensibly expected up in his remote corner of the country. He’s got eight four-star verbals, concentrated in the offensive skill positions and the defensive front seven. Another class or two like this and Coach Sark will have himself a team.

Ole Miss — By Rebel (or Black Bear) standards, Hugh Freeze’s staff is on fire. These days, it’s rare when recruits are as interested in playing for a winner as they are in playing early. A team’s on-field performance rarely gives the program a noticeable boost in recruiting. Ole Miss seems to be offering both: A fun, upstart team on the rise and also a roster not already loaded with forbidding talent. Playing in the SEC helps. Having the no. 1 overall recruit’s brother on your roster doesn’t hurt. (DE Robert Nkemdiche is expected to sign with Ole Miss, where his brother Denzel plays.) Scooping up Elijah Daniel, a four-star defensive end, after he was turned away from the University of Florida for failing to qualify academically, helps. They nabbed Laquon Treadwell, a receiver everyone in the country coveted, partly because of the success Donte Moncrief enjoyed this past season. They added a quality arm in Ryan Buchanan, and a couple 300-pound DTs who they hope will prevent Alabama from running roughshod through the middle of their defense. On top of all that, top-rated OT Laremy Tunsil is said to be in the fold. The best thing about the future is that it hasn’t happened yet, but you have to admit the future looks bright in Oxford.

Tennessee — The question of just how long it will be until the Volunteers will return to an SEC title game isn’t a fun one to answer. They finally made a solid head coach hire, but Butch Jones’s road ahead looks long and bumpy. All Big Orange had last season was that big-play passing game, but QB Tyler Bray, along with star receivers Justin Hunter and Cordarrelle Patterson, defected early. Zach Rogers, another productive receiver, graduated, as did two serviceable tight ends in Mychal Rivera and Ben Bartholomew. The normal amount of attrition occurred on the defensive side of the ball. With that many holes to fill — in other words, with that much playing time to offer — to pull a mediocre class up to Rocky Top is not a promising sign. At this point, Tennessee’s worry isn’t making it to the conference championship in Atlanta. Its worry is being the premier college football program in its own state.

Missouri — This is par for the course. They finished in the low 30s last year. In 2011 they had the 48th-ranked class, in 2010 the 21st. If it was in doubt upon their entrance into the SEC last year, with Florida scuffling and Georgia soul-searching and Spurrier throwing visors everywhere, it’s not in doubt now: The Tigers won’t threaten for the Eastern Division anytime soon.

Oregon — My maternal grandmother is the wisest person I know. Like many wise folks, she doesn’t give advice. What she will do, though, is listen patiently to a sad story and then, at its conclusion, offer up a summative adage. One of these little proverbs that sticks in my mind: Some men can’t stand to have it made. I’m not second-guessing Chip Kelly’s decision to move from Eugene, Oregon, where he is/was loved, to Philadelphia, where he will in time be derided … Well, yes I am. I’m second-guessing that decision. I wish him well, though, and I wish new Duck head man Mark Helfrich luck in maintaining the program that Rich Brooks and Mike Bellotti built into respectability and Kelly made a powerhouse. Kelly’s departure doesn’t seem to have hurt Oregon’s class. It’s a smallish group, only 16 to date, but it includes a pair of potent-looking running backs and five-star Thomas Tyner. They’ve also got verbals from a dynamic pair of San Diego brothers, both classified ATH, and I’m sure Helfrich will put them to good use. The worry with this class is the lack of anything eye-popping on the defensive side of the ball, where Oregon will lose several top performers from this past year’s squad.

Arkansas — Bret Bielema’s former team, Wisconsin (class currently ranked 45th), has a better-rated class than his new team, Arkansas (ranked 32nd), and at Arkansas he’ll have to scrape his way up a pecking order that includes Alabama and LSU and Texas A&M. If I’m an Arkansas fan, I’m excited about this hire but not excited about this class. Apparently it’s pretty difficult to make a splash in SEC recruiting with such a late start, but yikes is this group underwhelming: only two four-stars and several guys rated two-star or no-star. It seems the Razorbacks are courting Altee Tenpenny, an Alabama RB commit out of Little Rock who’s rumored to be wavering. Getting Collins or Tenpenny would help.