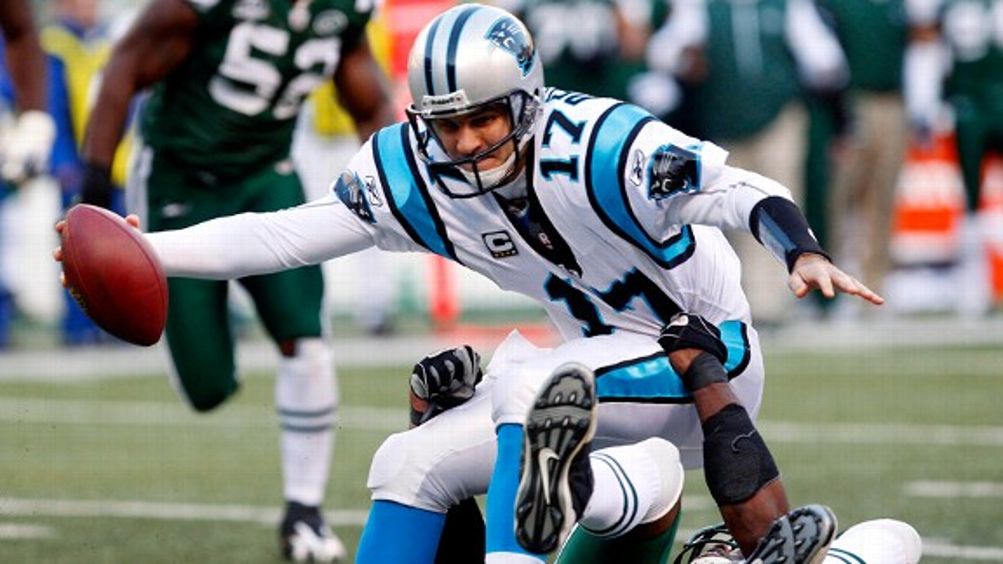 I understood that what I was doing ultimately didn’t matter, had no reflection on ‘who I actually was as a person,’ but by making a quiet, eternal truce with professional mediocrity, I could live comfortably while my employer matched my contribution to my 401(k). Ultimately, not a bad deal, particularly in the context of the current recession, but it is interesting to think about how spending eight hours per day in an office environment can impact our social interpretation of sports.

As ‘great’ as we all might think we are, we probably have more in common with a mediocre NFL quarterback than with any other athlete. We usually watch them struggle and laugh, but the humor in watching a quarterback struggle seems like a dark, subconscious coping mechanism to process our own identity in the workplace. Most career paths don’t even provide a context to achieve ‘professional greatness.’ The obsessiveness by which we question the efforts and capabilities of mediocre quarterbacks often replaces the critical introspection that could actually improve our own lives.

We can easily deconstruct most athletes into ‘resources’ who have to justify their salaries, basically using every game as an in-depth performance review where we can look into their statistics, body language, and attempt to quantify their unquantifiable contribution to the team. Owing to the ‘modern media landscape,’ there is nowhere for most players to hide from stat gurus or casual fans. We are able to marginalize many professional athletes into ‘the mediocre’ more easily than ever before, and it is infinitely more entertaining than just celebrating the greatness of Aaron Rodgers.

Mediocre performers are criticized and ‘exposed’ as a liability before they are benched, cut, or hidden on the field. Eventually, an athlete’s perpetual display of ineptitude is mocked, turning his athletic existence into a highly anticipated blooper reel. The mediocre NFL quarterback is the most prevalent athlete we watch as a comical entity because he has the greatest ability to impact not just a game, but a team’s entire season.

Why do we laugh at the guy who constantly underthrows his receivers? What’s so funny about an offensive coordinator who has built a game plan to minimize the involvement of the quarterback that the team doesn’t believe in? Why does his name automatically start to sound like the punchline of a joke? His only job is to be a quarterback. Why isn’t he good at it?

I wonder if individual quarterbacks even know how to accept their mediocrity in order to maximize their ceiling after years of being the constant alpha dog. When it comes to most careers, there are defined skill sets and common personality traits that can be trained and mastered in order to be successful. NFL quarterbacking is no different, but why can’t talent be directed at specific outcomes?

The most intense forms of competition, stress, conflict, and insecurity that most of us will ever feel take place at work. We embrace mediocrity as a safety net to alleviate our minds from these uncomfortable thoughts, and hide from the idea of heightened accountability and expectations. Instead, we choose to live vicariously through other people we don’t know who are actually ‘special.’ Athletes, technological entrepreneurs, and other people who are recognized for being legitimately ‘gifted and talented’ serve as our daily inspirations and escapes. While society tends to praise greatness and unique achievement, the public ceremony of ‘exposing’ mediocrity provides us with the opportunity for humor and hyperbole that inspires a dark breed of empathy and fan interest.

The concept of mediocrity is something that we all struggle to accept, and in ways it can actually liberate us to maximize personal and team-based achievements. Yes, we are able to cultivate meaning through friends, family, and rich experiences, but our personal contribution to the world will always be open to interpretation and deconstruction. Unfortunately for mediocre NFL quarterbacks, their contributions will be scrutinized no matter how rich their personal experience. While you might never experience the mid-level fame and riches associated with being a marginal NFL quarterback, at least your name will never inspire a chuckle quite like Bubby Brister, Steve Bono, Elvis Grbac, Danny Wuerffel, and Joey Harrington.