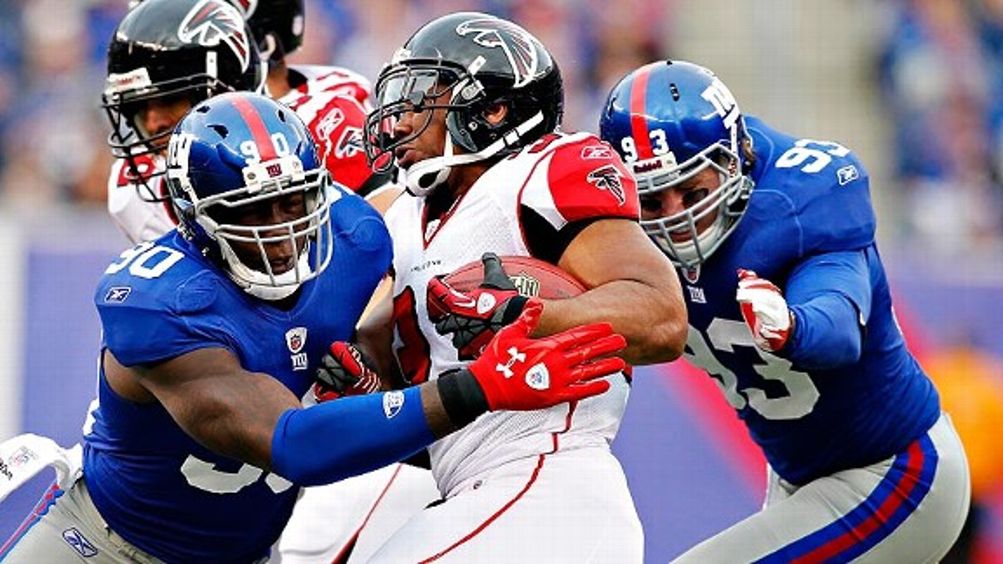 Short yardage is the sinewy history of the NFL, from leather helmets and the Decatur Staleys to space-age headgear and the Seattle Seahawks. If Jerry Kramer and Kenny Bowman hadn’t gone low and thrown some Archimedes at the knees of Jethro Pugh in the 1967 NFL championship game between Green Bay and Dallas, we would not now have the situation in which Kramer’s eventual great-great-grandchildren are guaranteed not to have to buy a beer in Door County, Wisconsin, for their entire lives. Short yardage is the NFL’s primal moment, the loudest and biggest bang of all creation. And fourth-and-short is the primal moment of the primal moment. So much of football doesn’t make sense the way it used to. This does.

Twice yesterday, the New York Giants defense faced that moment, the primal of the primal, and twice they stopped the Atlanta Falcons. (The Giants also blew up the Falcons on a third-and-short situation.) And twice you saw the Atlanta offensive line suddenly find itself moving up and not forward, as though they were a wave and the New York offensive line were a seawall. Twice, the Giants hurled them back, and if you want to know why New York is going back to Green Bay next week to face the Packers in yet another playoff game, and if you want to know how an NFL playoff game ends up with a baroque score like 24-2, then look to those two moments. As a defensive end, Osi Umenyiora plays outside the main contact area where fourth-and-short explodes, but he knows what he hears.

“It’s crazy in there,” he said. “You watch the guys, and you know they’re trying to get low and blow you up from down there.”

For his part, Canty was at ground zero on all three of these clamorous occasions yesterday. The fourth-and-shorts stood out, but he was feeling a little greedy about the Giants’ performance. “Didn’t we get another one?” he asked. “There was a third-and-one, too, right?

“It’s crazy in there up the middle. You just try to know how they’re trying to move you out and you have to not let them do that. It’s not about fancy strategy. It’s about will.”

The first of the fourth-and-shorts came on the first play of the second quarter, when the game was still a slugnutty, scoreless tie. Atlanta quarterback Matt Ryan tried to sneak from the Giants’ 13-yard line to the Giants’ 12. On the replay, you could see Ryan turn his head slightly to the right just as he hit the line, like a man walking around the corner of a building who finds himself startled by the wind. That slight adjustment was just enough to turn away the play.

(Although, to be entirely fair, that abortive Atlanta drive ultimately resulted in the Falcons’ only score when, during the ensuing possession, safety James Sanders chased Eli Manning into an embarrassing intentional-grounding penalty in Manning’s own end zone, which gave Atlanta a safety and its only points of the game.)

The second of them came with a little over four minutes left in the third quarter, and the game still in doubt with the Giants clinging to a 10-2 lead. This time, when the Falcons lined up on fourth down at the Giants 21-yard line, Umenyiora got a little frosted. “To be honest,” he said, “yes, I was a little insulted. I felt a little disrespected.” Again, Ryan threw himself into the line and again the Giants bent him like a paper clip. (Mike Smith’s decision to send his quarterback headlong into a wall twice is going to light up Atlanta talk radio for at least six weeks, at which point it will be time to yell about the Braves again.) “Next week,” Umenyiora said, “I think the Packers will probably kick it.” New York capitalized on this stand when Hakeem Nicks took a short pass from Manning and went 72 yards with it to break the game open at 17-2. At that point, it was open season on poor Ryan, who spent the rest of the game running for his life.

“Once we got that lead,” Umenyiora said, “we could do some stuff to shake them up.”

It has been a revelatory month for the Giants, who are now playing better defense than anyone in the league. Umenyiora and Justin Tuck are both back from nagging injuries. (Tuck had a come-to-Jesus meeting with coach Tom Coughlin a few weeks back that may have turned the entire season around.) The improvement in the front seven has taken the pressure off a dodgy New York secondary, which played with great confidence yesterday, jamming the fleet Atlanta receivers and busting Ryan’s timing to hell and gone. And on the other end of that defensive line is Jason Pierre-Paul, a man with no discernable last name, who might be the best defensive player in the NFL. Watching him play for the first time is utterly revelatory, like the first time you saw Tim Lincecum paint a corner, or Kevin Durant leave a defender groping at the air. You jump out of your seat when he makes a play, even in the relative anonymity of the defensive line. And with all that, he’s still incredibly raw. “It’s still amazing,” New York’s Justin Tuck told ESPN’s Johnette Howard recently, “what he doesn’t know.”

His is a preposterous story, a former basketball star who played one year of football in high school, which was enough to get him a ride to the University of South Florida, but not until he’d bounced through two junior colleges first. He is the son of Haitian immigrants, whose father has never seen him because he lost his sight before Jason was born. Pierre-Paul is 6-foot-5 and 280 pounds, which means he’s too strong to be moved, and with 81 inches’ worth of arm length, he can stay three feet away from an offensive lineman while pondering which way to toss the poor guy.

Yesterday, Pierre-Paul was instrumental in the second — and most crucial — of the fourth-and-short situations. He completely blew up his side of the line, collapsing the whole pile on top of Ryan and helping linebacker Chase Blackburn slam the whole ungodly mess to the ground.

“It’s as serious as it gets, fourth-and-1,” Pierre-Paul said. “You just line up and you decide that you want it more.

“I know there are a lot of guys here who were on the team the last time we went to Green Bay and won. I’m hoping we can do the same thing this year.”

All of a sudden — and don’t bring the Tom ‘n’ Tim Show into this, I’m warning you — it’s the game of the weekend next week. The Giants and the Packers will meet amid the snow and the cold, and the great frost giants of memory on the field where Jerry Kramer and Archimedes once conspired at immortality — or at least as much immortality as can be conferred by NFL Films. They ought to broadcast this one in black-and-white. There damned well better be snow.

Previously from Charles P. Pierce:
Tebow’s Religion: Fair Game
The Stupidity (and Sexism) of Baseball’s Media Dress Codes
The NCAA and Nostalgia
It Wasn’t (Just) About the Money
The Tailgate and Modern America
The Brutal Truth About Penn State
The Decline of Horse Racing
The Beginning of the End for the NCAA