Chris Paul Is Sending Blake Griffin a Message Through the Media 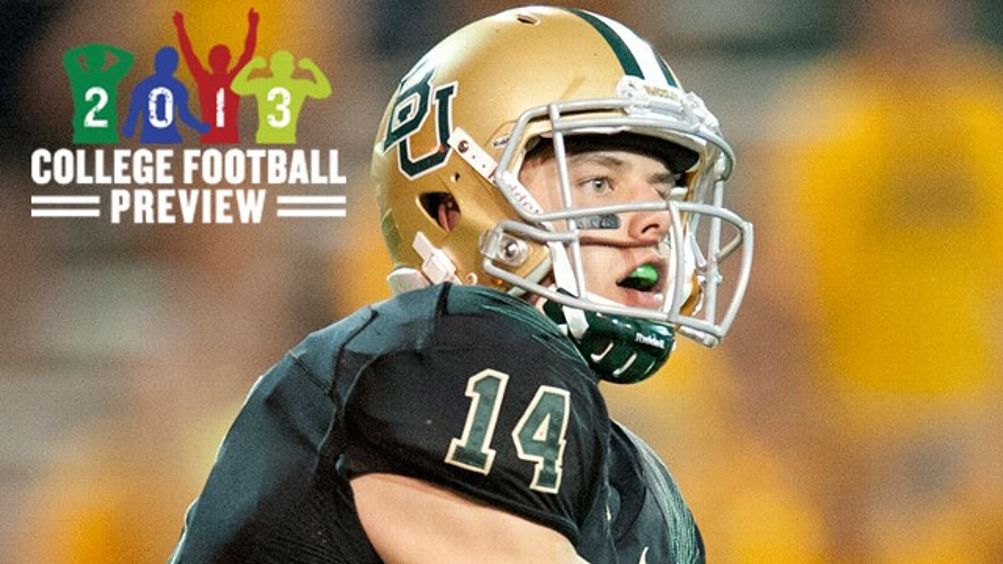 1. Really, It’s a Marathon and a Sprint.

“I’m not sure I’m smart enough to verbalize that,” says Art Briles, trying to put into words the shift in perception Baylor football has enjoyed since he arrived and Robert Griffin III brought a Heisman Trophy to Waco. Being Art Briles, he recovers quickly, pouncing with satisfaction on the correct bon mot. “What we were, we ain’t, and what we is, now, is good. How’s that?”

In 2010, three seasons into Briles’s tenure, the Bears earned their first postseason berth since 1994. The next season, Baylor’s great breakout of 2011, saw the team lead the conference in total offense, ranking fourth nationally in scoring, and record their first bowl victory since 1992. In 2012, absent the powers of Heisman winner Griffin, favorite target Kendall Wright, and perennial scorer Terrance Ganaway, the Bears led the conference in total offense, ranked fourth nationally in scoring, and won a second consecutive postseason contest. Heading into 2013, now without the services of Griffin replacement Nick Florence and hotshot receiver Terrance Williams, how are the Bears going to do? About the same, Briles believes, without any evidence of putting on airs, because he is not. He has his system, which prompts headlines like “How the hell do you stop Baylor?” He has Bryce Petty, who enters the campaign with zero starting experience but has had four years of tutelage behind Griffin and Florence and has been, by all accounts, an eager student. And to spell Petty, he has a returning ground attack tandem that wrecked shop the last half of last season in Glasco Martin and Lache Seastrunk.

“It’s a marathon, it’s not a sprint,” says Briles, his metaphor engine humming now. “It’s a journey and you have to make sure you shut all the doors, lock ’em, put your seat belt on, and get ready for the ride, because there’s gonna be some bumps along the way.”

The Bears lost their first four games of Big 12 play last season, a skid that Briles does not like to hear called a skid. “We go on the road and we lose to West Virginia by seven, we lost on the road to Texas by six, we come in and turn the ball over six times against TCU and don’t play well, and then we go to Iowa State and are up 14-7 and don’t convert with a chance to go up 21-7, and consequently don’t end up winning the football game. We played well in two games and got beat. We didn’t play well in two other games and got beat. We knew we had a good football team all along; we just didn’t show it on the football field on Saturday.”

That changed November 3 against Kansas, when Seastrunk delivered double-digit carries for the first time and turned in a 103-yard rushing performance. Baylor would lose the following week in a close game at Oklahoma before winning out the rest of conference play, but everybody’s quick to point to the Kansas game as the beginning of a long, fast downhill run.

“It’s a misconception of our offense,” says Petty, “that it’s an air attack. In reality, everything we do is set up off the run.1 Lache came in and stole the show, and that was a big spark for our offense.”

“The thing nobody really understands,” says Briles, “is that he’d never played college football before. He sat out two years, basically, going to Oregon and not playing and then coming here and having to sit. It was a process for him, too, and once he got his feet from moist to wet, then he became the player and the contributor that we felt he could be and that he is now.”

“It’s not on your time,” says Seastrunk. “You can’t force it to happen. All you can do is prepare, and when your number’s called, show what you got.” Whatever he showed, he says he doesn’t remember much. “I was ecstatic. I really didn’t know what was going on. Finally that next game I calmed down.” With meaningful playing time in just six games, Seastrunk finished the season with 1,012 yards of total offense. Martin racked up 889. And this season they’ll have had a whole offseason to prepare together. Sleep tight.

The guy who’ll be giving Martin and Seastrunk the ball, and Tevin Reese, and Jay Lee, and all the rest of Briles’s cogs, didn’t intend to be at Baylor at all. Bryce Petty was a Tennessee commit and became a casualty of the Phillip Fulmer–Lane Kiffin regime change.2 “I don’t think I’m necessarily holding a grudge,” Petty laughs, “but at some point you want to prove people wrong. And if there’s a list of those people that you check off one by one while you’re doing it, so be it.”

His coach certainly thinks he’s capable of greatness, and again, you have to understand that this is not braggadocio, but just how Art Briles talks. From Big 12 media days, when asked about “reasonable expectations” for his new starter: “First thing that popped into my mind is, break every Baylor record there is offensively.

“His expectations are to win every game and be the best quarterback in the United States of America.”

And last week, in his office in Waco: “Once we get him on the field, and he gets the opportunity to make a name for himself, then he’ll write his own legacy.”

That’s fine with Petty, who sees these expectations as a compliment. “I really don’t have any doubts, fears, or worries about the expectations that are put on me, because that’s what I was brought here to do. And if we break records along the way, that’s great, but as long as Baylor’s winning and we got that B12 ‘ship on our fingers, then I’m good to go.

“It’s fun to listen to, but at the end of the day, there’s a difference between potential and productivity, you know. I think the biggest thing is just getting out there and playing, and letting that all really pour out, that whole four years of not playing. It’s finally time to put that on the field and show Coach Briles why he brought me here, and to show Baylor Nation that we’re gonna be OK. And that this is a team that, as great as Griff was, it’s here to stay. It wasn’t just a fluke deal. We’re here to stay.”

Grantland: How do you bounce back from a game like West Virginia last year, where you score 63 points and go home with an L?

Petty: Our defense has made huge strides, starting with the last five games of last year. They had a great spring. I mean a great spring. Kinda made us mad in that offensive meeting room a couple times. We’ve always kind of handled our defense fairly easily and then this year it was totally different.

Briles: That’s not ever an issue. What matters is that we didn’t accomplish our goal, and our goal is to win. We lost 3-4 possessions in the first quarter that we didn’t score on. There’s always a way to improve your play that might help our team win.

• Build-a-Bear. The most drastic shift in Baylor’s fortunes from the pre- to the post- RG3 era, per Briles, is in recruiting. “I mean, now, we can certainly recruit the top players in the state of Texas, which is where we primarily recruit, like everybody else in America does. We’re on equal ground with everybody we go against. Which was not the case three or four years ago.”

• Shortest distance between two points. “Both of them should have 1,000 yards this year,” says Briles of Seastrunk and Martin, with a matter-of-factness that might suit a discussion of which color uniform pants go with which helmet. Martin is undaunted: “Well, we go out and practice like we’re going to put up a lot of points.”

• Well, now you’ve done it. Briles laments, laughing, the spread of concepts he’s been working with since coaching Texas high school football in the early 1990s at higher and higher levels of the game: “It’s a situation where for some years there, when you’re doing things nobody else is doing, then you have a little bit of a cutting edge to you. As it becomes more universal, we’ll have to become more diverse ourselves.”

Grantland: We know what Coach Briles thinks of the preseason Big 12 poll.3 What do you guys think about being picked to finish fifth in the conference?

Seastrunk: You know, that’s fine. That’s what we do. We prove people wrong.

3. Designated Talisman: The Bear and the Building on the Brazos

Baylor’s new stadium is scheduled to be completed in time for the 2014 season. It looks swell in pictures. You can watch it become a building here. Briles, at Big 12 media days: “I don’t want to get redundant, but what it’s going to do is not just change Baylor, it’s going to change Waco and central Texas, because it’s on I-35, the Brazos River. If it sounds rehearsed, I’ve said it a million times … Where they’ve driven straight by for the previous 50 years, they’re going to look over and say, that’s Baylor University? That’s that stadium on the Brazos River? That’s their campus? That’s different.”

Until then, our favorite Baylor thing is Baylor keeping live bears on campus as mascots, because we are pretty fond of worshipful cults of young people being formed around animals that can readily kill humans dead. Baylor currently houses two bear mascots, Joy and Lady, who until recently were just straight-up walked around campus on leashes. The bears are allegedly no longer fed Dr Pepper because “the sugar is bad for their teeth,” not because “no women are allowed near Dr Pepper products, not even female bears.”

• Baylor football commences: Technically, the Bears’ first game kicks off the evening of Saturday, August 31, at home against Wofford, but we would argue they won’t have to play an actual football game until after the Terriers and Buffalo have come and gone and Louisiana-Monroe makes the rematch return trip on Saturday, September 21.

• Conference play commences: Saturday, October 5, in what should be another compelling rematch, at home vs. West Virginia.

• Required viewing: Immediately following that Mountaineers grudge game, Baylor will make a road trip to Manhattan and Kansas State, where the Wildcats will not have forgotten last season’s indignities.