And a Girl Shall Terrify Them

An Open Letter to Manny Pacquiao From a Gay Filipina American 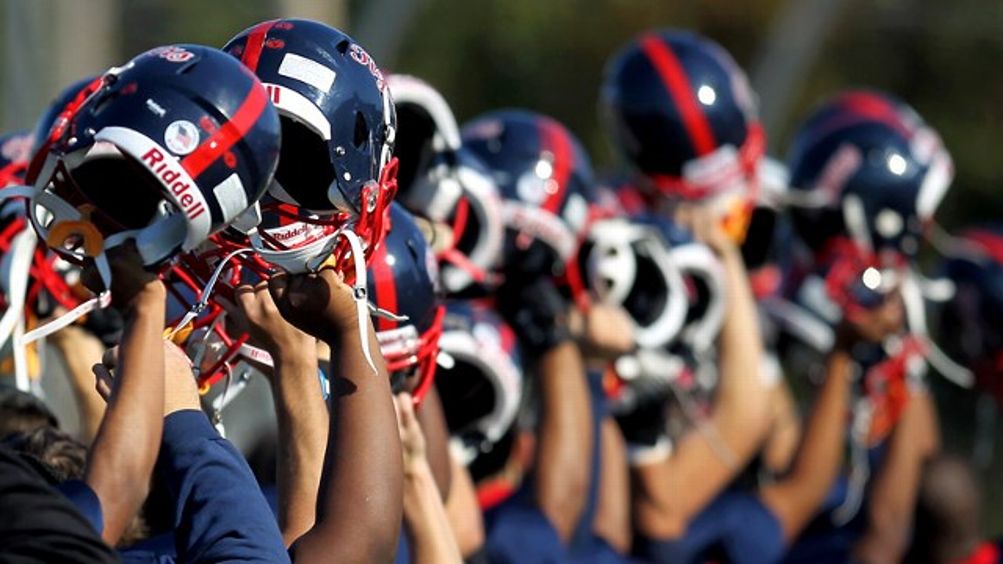 We sat in the dark, in the locker room under the bleachers at Carson-Newman College, on a hilltop in Jefferson City, Tenn., in those fraught minutes before kickoff. Outside, a few thousand people were buying hot dogs and checking their watches. Inside it was quiet until one of the brothers started slapping a beat on his thigh pads. Then a few more joined in. Then all of us, the Wonder Boys from Arkansas Tech University, were banging out the Eagles’ “Heartache Tonight” and singing.

I remember that sound. I remember where I was sitting on the cold concrete. Ask me about what happened when we took the field, though, and my memories start to fall apart.

The hardest hit I ever took was in that game, the last I ever played, the first round of the 1999 D-II playoffs. I weighed 180 lbs. with change in my shoes, so I learned early to lead with my head. Be the hammer, said every coach I’ve ever had. Sometimes it didn’t work like that.

I had come up from strong safety to fill a hole that was too big and broke down on a bowling-ball running back. I had to squat there and accept him and pray I was enough bump to trip him up. The collision brought him down about five yards past the point of impact and it felt like someone shot lightning down my spine and out of my toes. I won’t pretend our collisions were par with what the big boys do, but I’ll argue that the ball of mush in your head doesn’t draw a distinction.
Strange thing was, I jogged back to the huddle and looked at the guys around me. We’d worn our away jerseys, all white, but I saw green stripes. Perfect vertical stripes, clear as day. I never saw stars. Wasn’t like that. I tasted the tang of metal in my throat and felt intense déjà vu. I didn’t leave the field. It dissipated back in the huddle. But there’s no better anecdote I can think of that the right kind of hit will mess with your brain in ways we’ll never understand.

I don’t think my mind is messed up, but, really, who knows? And that’s a frightening thought.

I’ve never been examined. I’ve thought about it. I’m forgetful lately. My wife asks me to bring home milk and I return with everything but. I rely on note-taking to do my job; if I counted on memory, I’d be fired. I need my head.

I’ve always felt like football gave me more than I gave the game. It was a way to please my step-dad, whom I still call Coach. Football was our common ground in those years when a boy tries to understand the new man sleeping beside his mother. It was a way for a timid and insecure teenager to find love. The girl who would become my wife wore my number in the stands. In college, football was the connective tissue for a bunch of almost athletes.

You won’t hear people talk about it much, but there are few things better than taking a lick. Running full speed into another human being will make you cleansed and holy. I’ve been on the back of a bull and I’ve had a gun pointed in my direction, but neither held a candle to the paralyzing fear and ecstatic joy bound up in a high-speed collision. Those feelings are entwined at one extreme of the emotional spectrum, and football fingers them equally.

A solid hit reminds you that you’re alive. More than that. You’re alive and you can survive what may come. I watched my little brother, eight years old at the time, dart in front of a speeding car in the parking lot of a Baptist church in Oklahoma City. The car smacked him in the torso and he rolled onto the hood, then onto the concrete. I thought he’d be dead, but he popped up off the ground, a little embarrassed, and ran away. He went on to start at defensive end for the University of North Texas.

For eight years after college, I’d grow tense and excitable in late August. And especially on Saturdays in September. I’ve wondered if my body recognized that something was missing. It sure as hell wasn’t the crowd because we never drew more than a few thousand people. Maybe it was the violence.

Novelist Harry Crews wrote about the cleansing virtue of brutality for Playboy in 1984.

“Are you plagued with a sourceless anxiety? Do you worry about God and the order of the universe? Or do you worry about the existence of God and whether or not there is order in the universe? Are you unhappy for no apparent reason? Do you obsess over the future of your children? If the answer to any of the above is yes, then go out and get your ass kicked.”

That Crews essay has been in my head lately. It’s raised questions that defy all the science and research arriving at our feet. It begs a question that might make me sound like an apologist. But maybe we should consider it a part of this debate over the future of the sport: Is there a chance that for some men, football is what held them together for so long? In this vacuum of understanding, we know at a minimum that the idea flies against all of this complex new information. But somewhere between getting your bell rung and a stretcher is rebirth, and it shouldn’t be ignored.

It’s a version of the question about athletes having difficulty adjusting to “real life” when their careers end. They can’t function without the attention, the adulation, the thinking goes.

But what if that’s not it at all? What if the problem is the lack of clarifying human collision? You feast daily on the contact that lets you know who you are, and then wake up and all that is gone and you own a used car dealership. And nobody teaches you how to manage without the impact, so all that emotion you’d been retching through sport now rattles in your head.

This is coming from a guy who played just 10 years, junior high through college, and perhaps I’d have a different view if the party continued and I felt the grass growing around my brain. We’ve just begun to inquire about these things. So much is unknown.

I’ve got a relative who has been in and out of lock-up since he was a kid. He served time for setting fire to a house and making a sex tape with a teenager. The last time I saw him was at a family reunion. Fresh off a long sentence, he told me he didn’t know how to function on the outside. He was institutionalized. It pissed him off that a pimple-faced teenager could cut in line at the grocery store, and he couldn’t do a damn thing about it. “In prison, everybody knows their place,” he told me. He was looking for a way to go back.

I believe there’s less difference in his experience and mine than we think. Some of us just figure out ways to make it work on the outside. We drink, or throw ourselves into our jobs, or become Super Fans, or coach our kids and live our dreams through them. I’ve tried all those things with varying degrees of success, except the last one.

I took my son to see The Avengers the other day and he was engrossed by the mayhem. He’s three. His name is Benjamin Young, after his great-great grandfather, who survived the Civil War. We call him Bey for short. We stopped by Kmart and he picked out a Thor hammer, made by Nerf. He hasn’t put it down, even when he sleeps. For a week, he’s been sneaking up and cracking me in the head.

We don’t have a football in the house. Not yet. We’re just now beginning to face those decisions. This little man is practically made for it, though. He’s fearless and rugged, even when he wears his sister’s dresses. He’ll run across the house and slam off my legs and bounce back up and do it again. A big part of me wants to buckle his chinstrap in a few years and give him a chance to experience what I did. I think of it as a gift. Something my step-dad gave me. Something I want Bey to have.

Ben Montgomery is an enterprise reporter for the Tampa Bay Times and founder of gangrey.com.