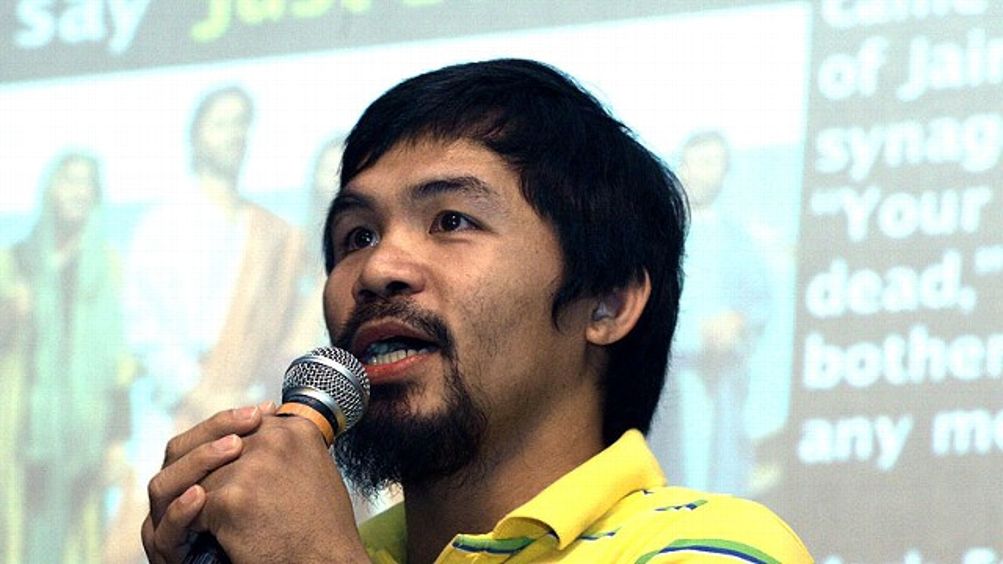 Editor’s Note: Last week, after President Barack Obama endorsed same-sex marriage, Manny Pacquiao — the world champion boxer, Philippine congressman, and staunch Catholic — was asked for his opinion on the issue. He does not support gay couples’ right to get married, and early reports of his stance misquoted Pacquiao in a way that led readers to believe he had quoted an Old Testament passage that says homosexuals “must be put to death.” Pacquiao denies that he said those words, as does the author of the Examiner.com post that quoted him. He clarified his position on gay marriage in the Philippine press Thursday.

Hello, Kuya1 Manny. May I call you Kuya Manny? You feel like “Kuya” to me: Whenever you fight, my other Filipino American friends and I light up our Facebook feeds with pugilistic patriotism for our parents’ homeland. You feel like ours. Your wins are our wins.

But today my friends had a lot of names for you. “Bigot” and “idiot” were their favorites. I keep looking inside me for some anger at you, but, weirdly, I just can’t find it. Instead, I find that I just want to talk to you.

Well, Kuya Manny, I have to say, first: I’m glad it turns out that you don’t want me to die. I believe you when you say you haven’t read the Book of Leviticus yet.

But I have read Leviticus, Kuya. I’ve read it too many times. When I was in Catholic high school, and I couldn’t help but know, more and more, what I was, I’d page through it in secret. I’d page through that passage in the Book of Romans, too. And I’d look at the Corinthians verse you cited. I kept looking for those passages, hoping that maybe, somehow, magically, their verdict had changed when I looked away. But the verses didn’t change. So I repeated to myself what the verses meant — that I was condemned to death and/or a life alone. That I should be left outside of every good, lasting kind of intimacy. That I would never get the chance to make my own family, because I was different in a way that prevented me from getting to do so. Knowing this at age 16 made me feel OK about dying early. Knowing this at age 16 made me wonder if I should speed my own death along.

But like I said! You don’t want me to die for being gay! That’s good. I’m glad. (I hope you don’t change your mind about that when you finally do get around to reading Leviticus.)

I know, though, that you also don’t want me to be married. I know you think this is a perfectly reasonable, justified stand to take against me. You’re like a lot of Filipinos: Catholic. Powerfully, post-colonially Catholic. Catholic na Catholic.

I’ve stood in front of the Black Nazarene in Quiapo Church that you pray to after each fight, Kuya Manny. I’ve felt the power and the grace of it. I get it. I get why you look at the long-suffering statue and feel the vindication of your own brutal bouts. When you grow up Filipina — or Italiapina, as I did — your parents give you Catholicism as a kind of heavy gift. A centuries-old guide for every life transition a human can go through. Birth, death, the burden of any wrongdoing, and, yes, marriage. But as I grew older and realized the dreaded word applied to me — lesbian — I realized the Church was what I’d have to feint and duck; the Church’s cruel, untrue dictates about me were what I’d have to dance with and defeat.

I watched your last fight in a movie theatre in Manila, Kuya Manny. I watched it sitting between two other women who are like me. Oh, we winced and worried for you. We felt like we were at Mass, leaning forward and praying together with all the hushed Filipinos who watched you stagger and darken with bruises. We wanted you to win. Marquez looked stronger, but we wanted you to win. And when Michael Buffer declared you the winner, we got up and cheered and clapped for you. Because we love your story, Kuya. We don’t love what you say about us — we don’t love that you say we’ll be left out of the Kingdom of God for being gay. But we love that you grew from a poor, underweight little boy on the streets of General Santos City into a champion the world knows as Filipino.

But between your time in the ring, your time in Congress, your time at your game show, your time tending to the poor crowds who gather, palms out, wherever you are, hoping you’ll bless them with your wealth, I wonder if one question rings quietly inside of you: How did I survive?

It’s the same question that still rings inside of me, at age 28, 12 years removed from the moments when I thought I should speed along my own death, actualizing everything the Bible said I should endure for loving the way I love. When I faced Proposition 22, Proposition 8, DOMA, Amendment 1, and too many dictates from the Church, and relatives, and leaders like you, who called me disordered, dangerous, diseased, doomed, how did I survive?

I’ll tell you what helped me survive, Kuya. The team of friends, teachers, and family — even a priest! A Catholic priest! — who coached me that my need for partnership was as natural as your union with your wife. The barkada who put their hands on my shoulders in my own tough corners and taught me again and again this lesson: God did not intend for any of us to move through this life alone, gay or not.

Kuya Manny, why would you deny this of me? In those quiet moments I imagine for you, when you ask yourself how you survived, I believe that your wife, more than anyone, is the one who helps to lessen the loneliness of your greatness. Ask yourself: Could you have survived all of this without her?

I’m glad I didn’t die, Kuya Manny, and that I survived to this day, when more people in my life decry you than support you for wanting to prevent my marriage in the name of some cold, removed Church and God. Every day I am amazed by the wealth of my survival. I’m as amazed as you must be, or have forgotten to be, about yours.

So I’m going to extend an invitation to you, Kuya Manny, that I don’t think a lot of gays would extend to you these days. I want to invite you to spend some time with me and my friends.

Kuya Manny, I want you to want me to win.

But maybe you never will. Maybe you’ll simply reopen your Bible, find those selective passages, and recite them to me again. Maybe I’ll simply have to sigh wearily and turn away from you, the way I’ve turned away from all of the idiotic bigots I’ve come across in my life, carrying a cross or a heavy book or a Constitution.

Either way, Kuya Manny. I feel too sad to celebrate your fights right now.

But my invitation is open to you.

I hope one day you’ll take it.

Laurel Fantauzzo was a 2011 Fulbright Scholar to the Philippines. She’s currently an Arts Fellow at the University of Iowa Master of Fine Arts in Nonfiction program. Ladies, she’s also currently single.